Anti-SLAPP legislation missing in action in BC 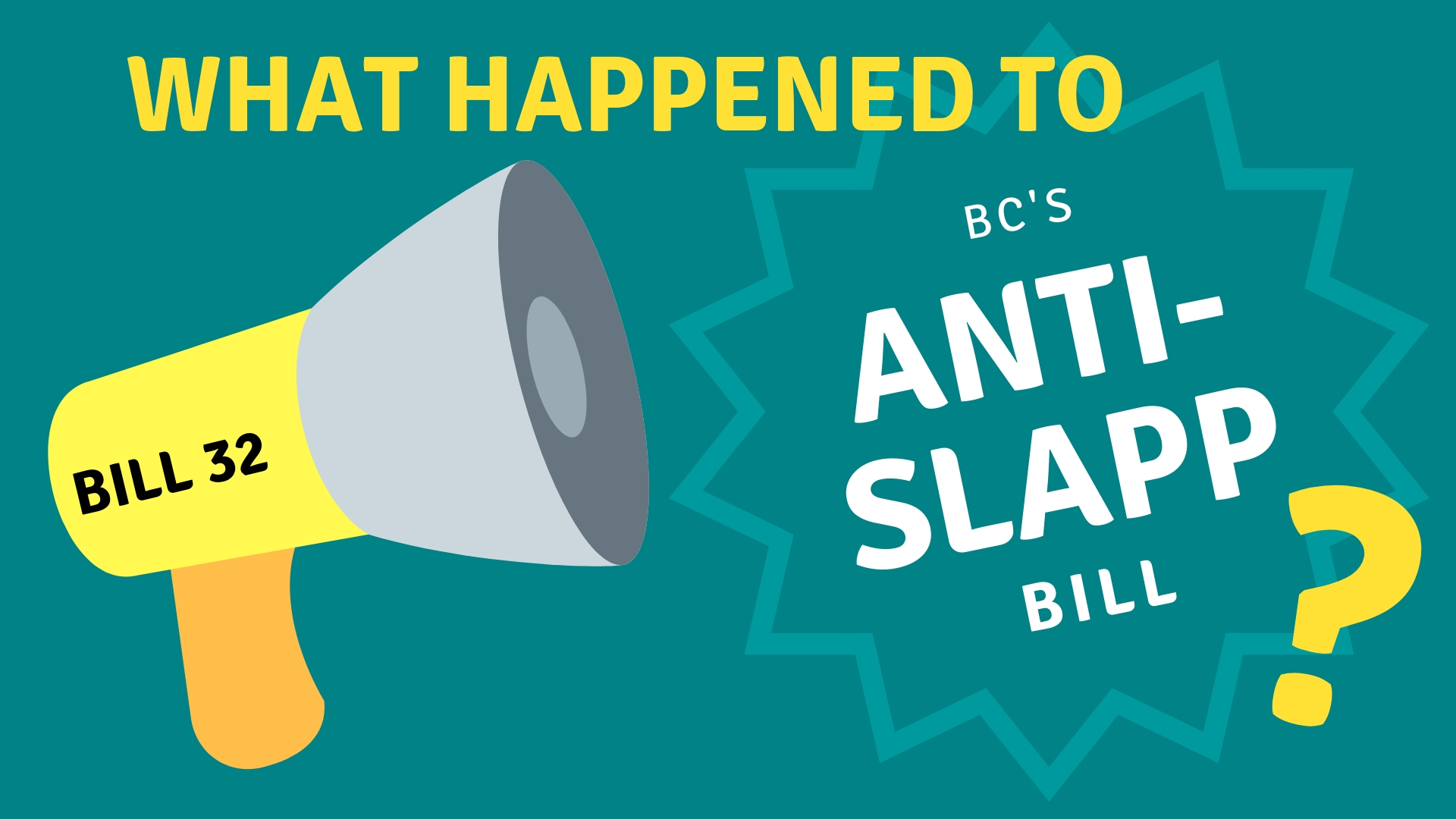 When it comes to protecting freedom of speech, the BC government is all talk.

In May, the government introduced Bill 32, the Protection of Public Participation Act, to protect British Columbians from strategic lawsuits against public participation (SLAPP suits), but that bill died on the order paper on Nov. 27.

SLAPP suits are filed by deep-pocketed companies, often on questionable grounds, for the purpose of silencing their critics. Large corporations might haul ordinary people into court for speaking out at a public meeting, circulating a petition, posting comments on social media or simply talking to a neighbour.

These suits do not need to win in court to succeed at their main objective, which is to make people too afraid to speak out on issues of public importance — from the environment to public health and human rights.

In a notorious SLAPP suit from 2012, Taseko Mines sued the Wilderness Committee for defamation over online articles stating that Taseko’s proposed New Prosperity mine could threaten the environment and fish by turning a nearby lake into a “dump site for toxic tailings.” When the Wilderness Committee posted statements on its website calling the lawsuit a SLAPP suit, Taseko promptly sued them for that, too.

A SLAPP suit defendant whom we’ll call Jane Doe (we cannot share her name due to the settlement she signed with the company that SLAPPed her) explains that SLAPP suits often result in heavy financial and emotional costs, even if the case never makes it to court.

“The thing about SLAPP suits is that they aren’t really meant to be ‘won’ so much as to break the resolve, and often the bank accounts, of the defendants. And in fact it doesn’t even seem to matter if they go to trial, as the longer it takes, the plaintiff has more opportunities to pile additional names into the defendant column.

“Part of me knows that I should maybe feel elated for coming out relatively unscathed. But, I don’t. What I feel is a sort of ‘survivors guilt.’ Like I abandoned my friends when I signed that agreement not to speak of the plaintiffs or their company again. But if I am honest, the thing that bugs me the most is that I feel deterred from getting involved again, but I know that if I let that feeling take root, the plaintiffs may as well have won.”

SLAPP suits like these are a tactic used by bullies. They shut down debate and cast a chill over public participation. We live in a participatory democracy — we are supposed to voice our views in public debates. By suing people for speaking out, SLAPP suits attack one of the foundations of our social contract: The right and responsibility of citizens to participate in public discourse and public life.

B.C.’s courts acknowledge the faults in our system that allow such claims to proceed, but judges are reluctant to fix them from the bench when the real responsibility should lie with the legislature. High-profile judicial experts, former attorneys general, and organizations ranging from the Union of BC Indian Chiefs to Canadian Journalists for Free Expression and West Coast Environmental Law have joined the call for BC to pass an anti-SLAPP law.

Attorney General David Eby, in introducing Bill 32, argued that “the ability of citizens to participate freely in discussion and debate on matters of public interest without fear of undue legal threat is vital to a vibrant democratic society.”

Bill 32 would have allowed people hit with a SLAPP suit to apply to have the case dismissed early on. Ontario and Quebec both have anti-SLAPP legislation, as do Australia and the majority of the United States. It’s a proven tool that strikes the right balance between protecting freedom of speech and public participation on the one hand, and protecting people from defamatory statements on the other.

Bill 32 was the only bill introduced by the government this session that failed to pass, and officials have been curiously silent about the death of this important legislation. British Columbians deserve to know what happened.

Simply put, anti-SLAPP legislation works. We need it in BC. Let’s put the Protection of Public Participation Act back on the table.

This article was originally published in the Times Colonist.