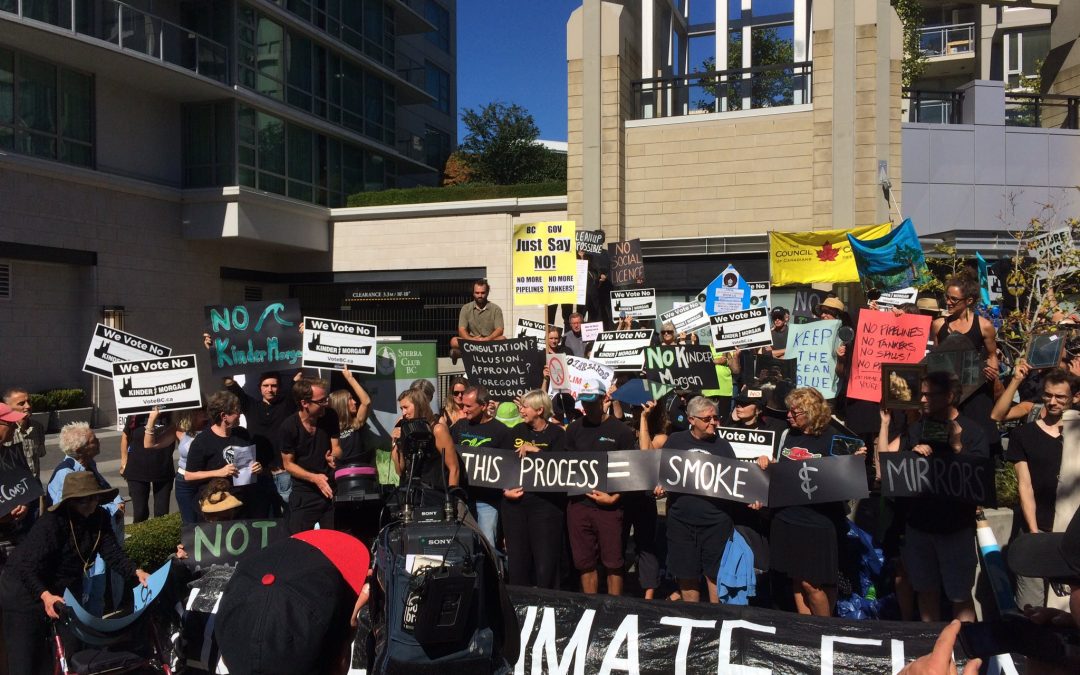 West Coast Staff Counsel Eugene Kung sat down with Senior Communications and Engagement Specialist Alexis Stoymenoff to discuss the recent report released by the Ministerial Panel on the Kinder Morgan Trans Mountain pipeline and tankers project. Here’s what Eugene had to say about the report, and the six key questions it poses in advance of a decision from the federal Cabinet.

AS:      Why don’t you start us off by explaining what’s happened with the Ministerial Panel report and where we’re at right now?

EK:      Well, in early November, the Ministerial Panel on the Trans Mountain Expansion released their report, which was the summary of a series of engagements that they held – both in public meetings and online over the course of about four months.

The purpose of the panel, as stated by Natural Resources Minister Jim Carr, was to restore the public’s faith in the regulatory process, in particular around the very damaged public opinion of the National Energy Board’s review of Kinder Morgan. A big part of that was that the public was really effectively not included in the NEB process, in terms of being allowed to participate – they really tightened down on the rules for participation, requiring people to prove that they were directly affected by the project.

And even once the NEB process started, it was incredibly flawed from the start. It had a very narrow scope; it didn’t include issues like climate change, for example, in the only environmental assessment at the federal level. It also really stifled the ability of intervenors to test Kinder Morgan’s evidence by refusing to allow cross-examination, and it really limited the ways in which the public could engage with the process.

So the new federal government announced a transition phase in January 2016 which included some supplementary processes, including the Ministerial Panel. Cabinet will consider the NEB Report, the Ministerial Panel’s report, Environment and Climate Change Canada’s greenhouse gas study, and any material from consultation with First Nations when making its decision.

That panel itself had some of the same flaws as the NEB, with allegations of conflict of interest, and unilaterally setting an unrealistic timeline. It was not tasked with making recommendations, but their report does a fairly thorough job of summarizing the views they heard.

In their report, the Panel pointed to six key questions for the federal government to consider as they make their decision on Trans Mountain. In introducing the questions, they quote Claude Levi-Strauss who said:

“The wise man doesn’t give the right answers, he poses the right questions,” and in that spirit, we end this report with “questions,” rather than “conclusions.”

AS:      Alright. So today, we’re going to talk about each of those six questions, from our perspective, and look at how they could play into Cabinet’s upcoming decision. Question number one is…

Can construction of a new Trans Mountain pipeline be reconciled with Canada’s climate change commitments?

EK:      The short answer is no. The long answer is somewhat complicated. We know that the math around climate change says that we have to leave at least 85% of the known reserves in the tar sands in the ground if we’re going to meet the international Paris Agreement commitments to stay “well below” a 2-degree increase in world temperatures, and to “strive” to stay below a 1.5-degree increase.

That means that we really can’t be investing in fossil fuel infrastructure that is built to be used for 50 to 80 years. These types of investments are long term, and they lock in a certain trajectory. Certainly directionally, it’s the wrong way.

Environment and Climate Change Canada has been tasked with measuring and estimating the upstream greenhouse gases associated with the project. We at West Coast have blogged about the challenges with their methodology, and it appears that they’re gearing up to basically say that the pipeline won’t cause much incremental increase in greenhouse gases because the volume of oil that it could transport is essentially less than what is already being planned and constructed in the tar sands.

It’s more important to focus on whether the direction this project leads us can be reconciled with climate commitments – and clearly the answer to that is no.

In the absence of a comprehensive national energy strategy, how can policy-makers effectively assess projects such as the Trans Mountain Pipeline?

I think the Panel really nailed this key question, which comes down to sequencing. What we have now is a decision on a pipeline, and as mentioned it’s challenging to measure its climate impacts. But at the same time, the decision is being made in the absence of very concrete climate targets or goals.

We’ve heard promising rhetoric from the federal government about taking climate change seriously. But there’s a gap between that rhetoric and what a real plan looks like.

To do this type of work we need to start with a target. That target could then be translated into a carbon budget – you know, how much carbon we are allowed to emit over the time period of those targets. And then that can be applied to individual projects.

This could be a part of a national energy strategy, but without those types of planning tools, it’s very difficult to look at one project in isolation. I think that’s what this question gets at, at its core – the lack of a central energy policy and strategy.

How might Cabinet square approval of the Trans Mountain Pipeline with its commitment to reconciliation with First Nations and to the UNDRIP principles of “free, prior, and informed consent?”

EK:      Well, put very simply, it can’t. Indigenous and First Nations opposition to the Trans Mountain pipeline has been very clear and unequivocal. Certainly it hasn’t been universal, but that’s not really the point of “free, prior, and informed consent.”

For example, the Tsleil-Waututh Nation, who have been leaders in terms of First Nation opposition to the pipeline. They conducted their own independent assessment of the project, which was grounded in their own Indigenous laws and backed by thousands of pages of expert scientific evidence, in order to confirm and inform their withholding of consent from the project.

It’s very difficult to imagine that they and other First Nations who are opposed will change that position. In addition to the spill and safety concerns that everyone living in Vancouver and the Lower Mainland may feel, what is important to remember for Tsleil-Waututh and other First Nations is that in fact, this pipeline represents an existential threat to their culture and identity – especially with the Tsleil-Waututh in terms of Burrard Inlet.

So if this pipeline is approved, it would be without the consent of First Nations, a direct violation of both the United Nations Declaration on the Rights of Indigenous Peoples (UNDRIP) and “free, prior, and informed consent,” as well as the government’s commitment to reconciliation.

So in addition to the government’s commitments to UNDRIP and free, prior and informed consent, we also have Canada’s constitutional duty to consult – and to meaningfully accommodate the concerns of the First Nations – which is closely connected to consent. Consultation is not the same as consent, but we know from the Tsilhqot’in decision and other court decisions is that the goal of consultation should be to reach consent. This duty can’t just be a “tick-box” duty, to just run through the process and say you’ve done it.

Taken together, it’s hard to reconcile approving a pipeline – which crosses the territory of many nations – in the face of significant First Nations opposition.

Given the changed economic and political circumstances, the perceived flaws in the NEB process, and also the criticism of the Ministerial Panel’s own review, how can Canada be confident in its assessment of the project’s economic rewards and risks?

EK:      I think this is a massive question for the Cabinet to consider. When this project was first proposed, the world looked very different. Oil was well over $100 a barrel, the US was only starting to produce a lot of its own oil, the Tsilhqot’in decision hadn’t yet come along, and today what we’re seeing is a really fundamental shift.

Oil prices have dropped by more than 50% and are likely to stay there for a long time, the Canadian dollar has also declined, and the role of the federal government is now different. In particular, there’s this kind of dogma around pipelines that accessing tidewater is going to somehow save Alberta’s economy.

Unfortunately, that’s not the case. There are a number of really prominent economists – Jeff Rubin, for one, and the folks at Oil Change International, even the International Energy Agency (IEA) and Canada’s own finance department – who have been discussing the impacts of this changed landscape on the economics of the pipeline.

Really, at the very best, what the pipeline can do is improve the options for oilsands producers to find customers. The question is whether that is worth $6.8 billion, running roughshod over Indigenous communities and local communities who are opposed to it, not to mention the climate commitments, if it doesn’t ensure that Canada can get a better price for our oil.

The Panel has correctly identified many of the flaws in the NEB process. I think anyone who thinks of the NEB review as a balanced and thorough review of the economics should look a little closer.

The realities of today’s energy market, combined with the impacts of climate policies worldwide, really do change the economics for the project, and not for the better.

If approved, what route would best serve aquifer, municipal, aquatic and marine safety?

EK:      I don’t know the answer to this, and neither does the NEB. Neither does the Cabinet. One of the biggest flaws of the National Energy Board as the body required to conduct the environmental assessment is that they didn’t really examine alternatives, including alternative routes, as is a common practice for environmental assessment regulators.

What they did instead was just to ask Kinder Morgan if they’d considered anything else. Kinder Morgan just said, “Yeah, we have. And this is what we think is the best.”

Of course, that changed when Kinder Morgan later decided it was easier to drill through a mountain than to convince people in Burnaby that it was a good idea to build this pipeline.

Really, we haven’t seen any plausible alternatives presented. Like the economic analysis and so much more, the NEB simply relied on Kinder Morgan’s own internal decision in what it put forward, and didn’t really look at any alternatives.

EK:      Neither of those terms are defined clearly in policy. However, the Prime Minister has stated “while politicians grant permits, only communities can grant permission.” I think that’s a big part of social licence.

At the end of the day, it’s about whether or not the people support the project. And there is not a lot of support for the project in BC, who will bear most of the risks, with little reward. Opposition is also strong across Canada.

As we discussed, the Ministerial Panel was meant to restore public confidence and allow for that social licence. I would suggest that if anything, it only solidified and strengthened opposition amongst folks – some of whom met for the first time, talking about why they were opposed at those panel meetings.

Determining public interest is a balancing act. As we’ve discussed, it’s pitting very significant community and public opposition, combined with Indigenous opposition and climate leadership, against fairly speculative and non-dependable benefits and needs. In my mind, that balance is fairly clearly tipped against the pipeline – but I’m not sure that’s how the federal government is going to go.

The federal Cabinet is expected to announce its decision by mid-December. So until then, we’ll have to wait and see.…