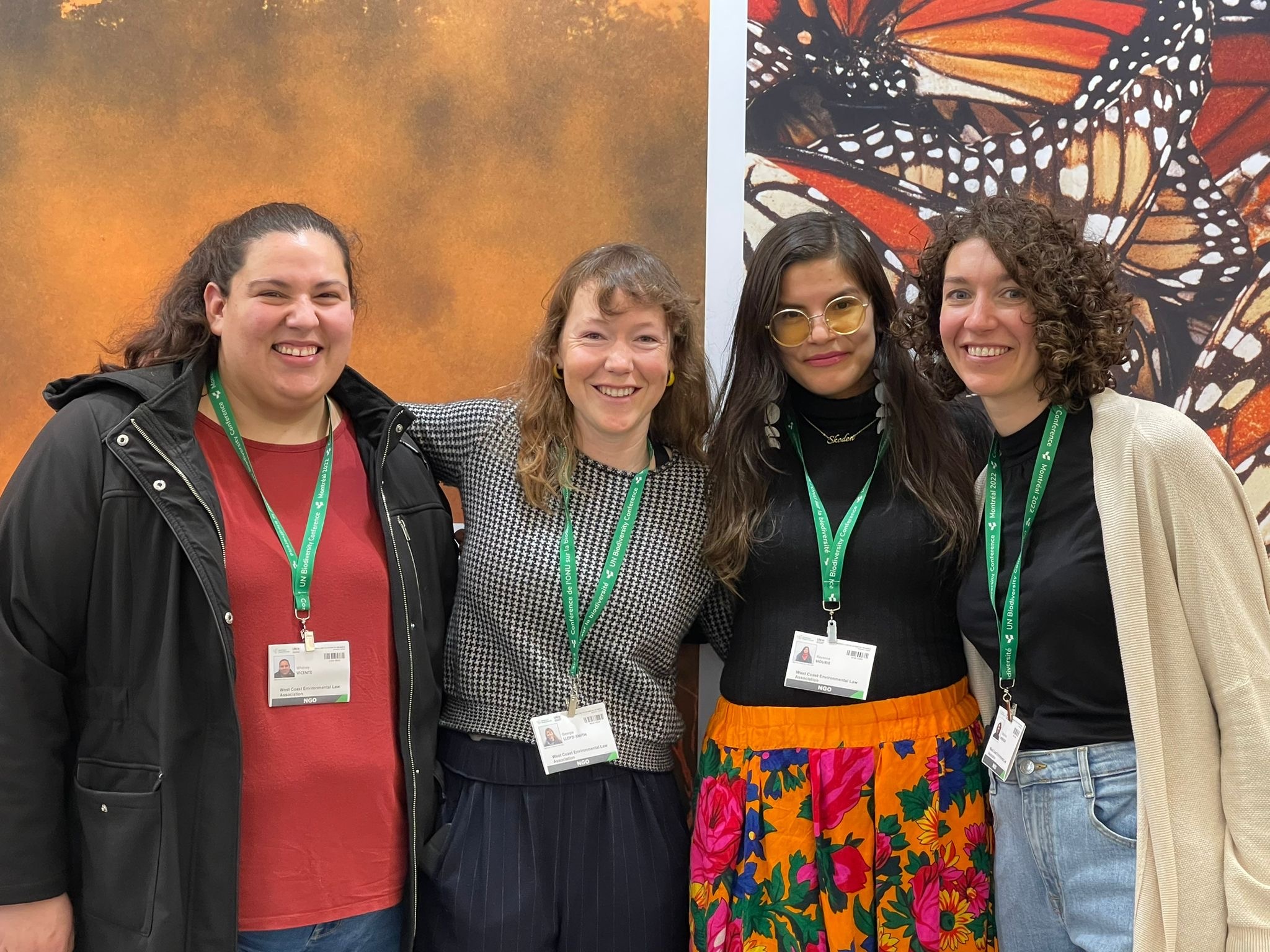 Right now, representatives of 196 countries are joining nature advocates from around the globe in Montreal, Quebec for the 15th meeting of the Conference of the Parties to the UN Convention on Biological Diversity (CBD) – also known as COP15 or NatureCOP. This major international event is an opportunity for the world to come together and agree on a plan to halt and reverse nature loss before it’s too late.

Biodiversity loss isn’t just a problem affecting plants and animals. The loss of nature affects the health of people, too – impacting livelihoods, food security, cultural and spiritual practices, and many ecosystem services that we all rely on. We’ve come a long way in understanding the threats and impacts (eg., cumulative effects) to the world’s biodiversity and populations, over the last decade. What we need now is bold leadership to take us beyond targets and goals to concrete action, here in Canada.

Canada and BC must show leadership at NatureCOP, by helping to negotiate a global framework to halt and reverse nature loss, and following through with bold steps to achieve ambitious conservation goals here at home. The path to get there must be inclusive, well-resourced, and grounded in respect for the rights and jurisdiction of Indigenous peoples who have stewarded their lands and waters since time immemorial.

The West Coast team is in Montreal to attend this important global conference to push for meaningful action from our governments, and contribute to the movement of respect for nature – moving us back to rich, abundant and healthy ecosystems. Read on to learn more about five key priorities that our staff lawyers are advocating for at NatureCOP, from enhancing support for Indigenous-led conservation initiatives to strengthening marine protection, and more. 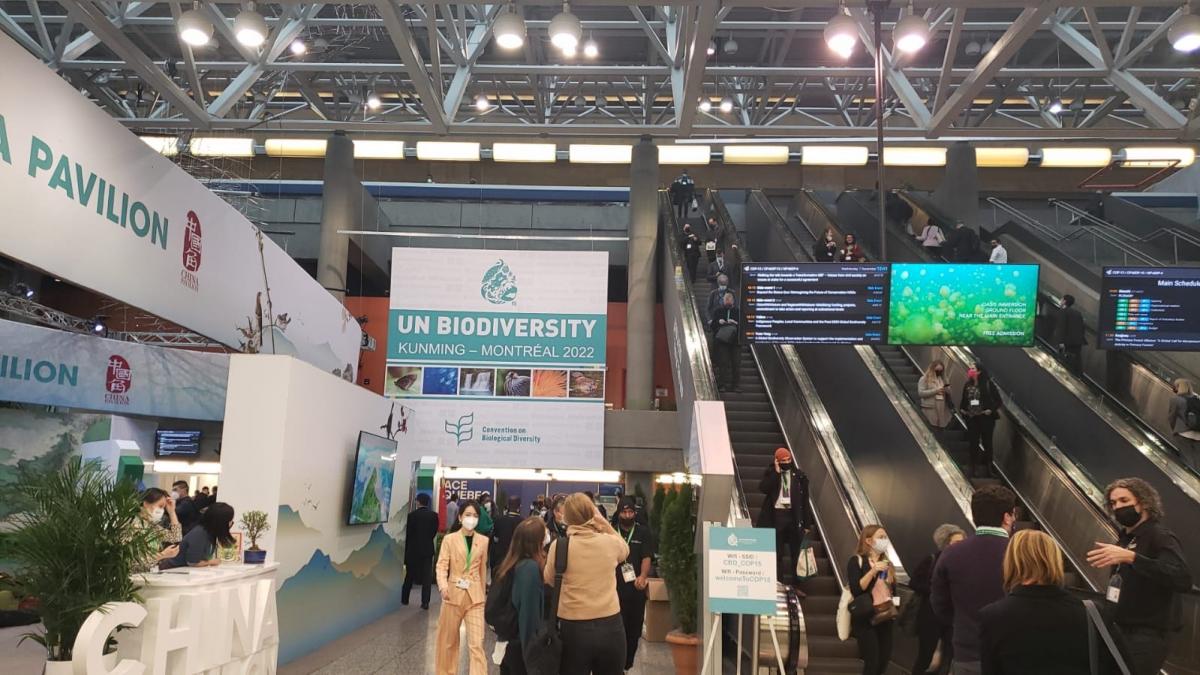 West Coast Environmental Law’s marine team is heading to Montreal and we will be keeping the ocean in the room during COP15 negotiations.

It’s the oceans that connect our global community. Our well-being as humans is inextricably linked to the well-being of the ocean: one in every two breaths we take comes from oxygen released by ocean photosynthesis. And yet the planet’s coasts and oceans are suffering, and are consistently left out of international biodiversity and nature conversations.

We want to ensure that Canada leads the way by affirming its commitment to protect 30% of the ocean by 2030.

At the 2010 NatureCOP, held in Aichi, Japan, all party states including Canada committed to protecting 10% of coastal and marine areas by 2020. This target has been the impetus for Canada’s efforts to increase marine conservation in the last five years:  Since 2017, the area of protected ocean rose from less than 1% to almost 14%, and Canada has further committed to protecting 25% of the ocean by 2025 and 30% by 2030.

Despite the federal government’s existing commitments to ocean protection, NatureCOP presents an important opportunity to hold Canada accountable on the international stage, and to encourage other countries to achieve the same goals. To set a global example, Canada needs to ramp up efforts to meet its ocean protection targets, while ensuring that all marine protected areas (MPAs) meet minimum standards that ensure biodiversity and habitats are actually protected.

Indigenous laws, governance, management, and relationships with the natural environment have existed here for millennia. These knowledge systems – encompassing the cycles, seasons, changes, and the adapting that had to occur to live in relationship with nature (rather than dominance) – deeply connect Indigenous peoples to their territories.

Colonization, spearheaded with colonial policy and laws intended to benefit a certain group of people, has only existed (in Canada) for just over 150 years – and yet, its status quo is still very much ingrained into Canadian law and policy. The national and international discussions at COP15 should be grounded in these truths, with collaboration and partnership guiding the way forward. Concepts such as legal pluralism (the co-existence of multiple legal systems within one society), two-eyed seeing (seeing with one eye the strengths of Indigenous knowledge and ways of knowing, and with the other eye, the strengths of western science and ways of knowing) and relationship-building must be at the heart of conservation solutions.

I intend to stand in solidarity with my colleagues and friends who are moving Indigenous-led conservation and protection efforts ahead – including West Coast’s RELAW (Revitalizing Indigenous Law for Land, Air & Water) Partners who will be sharing with the world how they are standing up their laws to protect their territory.

At COP15, we will be pushing for commitments to ambitious protected area targets that centere Indigenous governance and law.

At a time when we need it the most, Indigenous nations are stepping up and upholding their responsibilities to their territories, including by establishing Indigenous Protected and Conserved Areas (IPCAs). IPCAs create wide-ranging benefits for the land, the people and the economy. Indigenous approaches to caring for the land are more effective, leading to healthier lands, waters and higher rates of biodiversity; IPCAs and Indigenous Guardians enhance the social, cultural and economic well-being of Indigenous communities and beyond; and IPCAs and Guardians are good investments that yield immediate economic benefits, significant returns on investment, and lead to more stable and diversified economies.

For these reasons and more, IPCAs should be wholeheartedly embraced as the gifts that they are, for all beings now and into the future. Yet Indigenous nations still face many barriers when working to establish IPCAs, including a lack of recognition of their law and authority, ongoing industrial activities occurring without their consent, and a lack of legal tools for the Crown to align its laws and decision-making with Indigenous governance of IPCAs.

Canada and BC can do more to meaningfully support both marine and terrestrial Indigenous-led conservation – including by removing legal barriers to IPCA establishment and recognition and providing long-term sustainable funding.

Alongside my colleagues, I will be shining a light on the inspiring IPCA projects of nations we work with through the RELAW Program, including the Kitasoo Xai’xais, Kaska Dena, and sməlqmíx peoples. I look forward to connecting with the global community of Indigenous and Community Conserved Areas (ICCA) Consortium members to learn from and amplify experiences worldwide.

The BC government needs to follow through on their commitment to enact legislation that prioritizes biodiversity and ecosystem health, and co-develop this legislation with Indigenous nations.

West Coast has been working on a campaign advocating for overarching biodiversity and ecosystem health legislation in British Columbia. The province has committed to the recommendations of the Old Growth Strategic Review, which called for a paradigm shift in how we manage forests and recommended overarching legislation that applies to all industries. This law would provide a framework for the protection of ecosystems, habitats and species at risk in all resource management decisions. A paradigm shift is needed, and has the power to move BC towards healthier relationships between people and the living environment, on which we all depend.

We are calling on the federal and provincial governments to use the opportunity presented by COP15 to take concrete action on protecting and restoring biodiversity and ecosystem health. We look forward to taking the time at COP15 to connect with allies, professionals and decision-makers to share knowledge and learn about how we can best advocate for the health and well-being of the lands and waters on which we live and work.

Much like climate change, the federal government has a long history of making promises to protect biodiversity and failing to make good on them. For too long, Canada’s biodiversity goals have been vague, lacking specific targets and measures that would let the public hold leaders to account. As a result, biodiversity reports can overstate our performance while our species continue to decline.

Recent proceedings of a national workshop on biodiversity paint a stark picture of the situation here in Canada:

“Between 1970 and 2014 in Canada, mammal populations dropped 43 percent, amphibian and reptile populations dropped 34 percent, and fish populations declined by 20 per cent. Monitored populations of grassland birds dropped 69 percent, aerial insectivores fell 51 percent, and shorebird populations declined by 43 percent. Fifty nine percent of Canada’s International Union for the Conservation of Nature red-listed species have declined, including among species listed as at risk under the Species at Risk Act. Habitats such as wetlands, Prairie grasslands and old-growth forests continue to lose ground every year. To become nature-positive by 2030 we must bend the curve of biodiversity loss, and we must do it now.”

It is time for Canada to stop merely talking, and start walking. Last year, the federal government passed a Net-Zero Emissions Accountability Act that holds it to account for setting climate targets and then actually meeting them.

We need a similar law for biodiversity. A federal biodiversity accountability act could require the government to set concrete and ambitious targets for protecting species and habitats, make detailed plans for how it will meet those targets, and impose legally-binding requirements to ensure the targets are met. Canada can be a biodiversity leader in action as well as in words, and we are hoping that COP15 will be the place that the federal government finally commits to holding itself to account through law.

Stopping the “death by a thousand cuts”

While some projects like mines and dams can do major damage to species that only exist in a select few areas, the biggest cause of biodiversity decline in Canada is from the cumulative effects of multiple projects and activities in a region. Roads, transmission lines, deforestation, oil and gas activities, farming and a myriad of other activities incrementally chip away at ecosystems until they can no longer support species. This atlas of cumulative effects in Blueberry River First Nation territory shows just how devastating cumulative effects can be.

We need a smarter way to assess, understand, and avoid individual projects’ impacts on biodiversity so that we can reverse this trend of cumulative effects. Canada’s Impact Assessment Act contains a requirement to consider the extent to which projects help or hinder our ability to meet our environmental obligations, including biodiversity obligations. At COP15, we will be working with allies, industry and government to identify better ways to ensure that project-level decisions help us protect and restore nature. 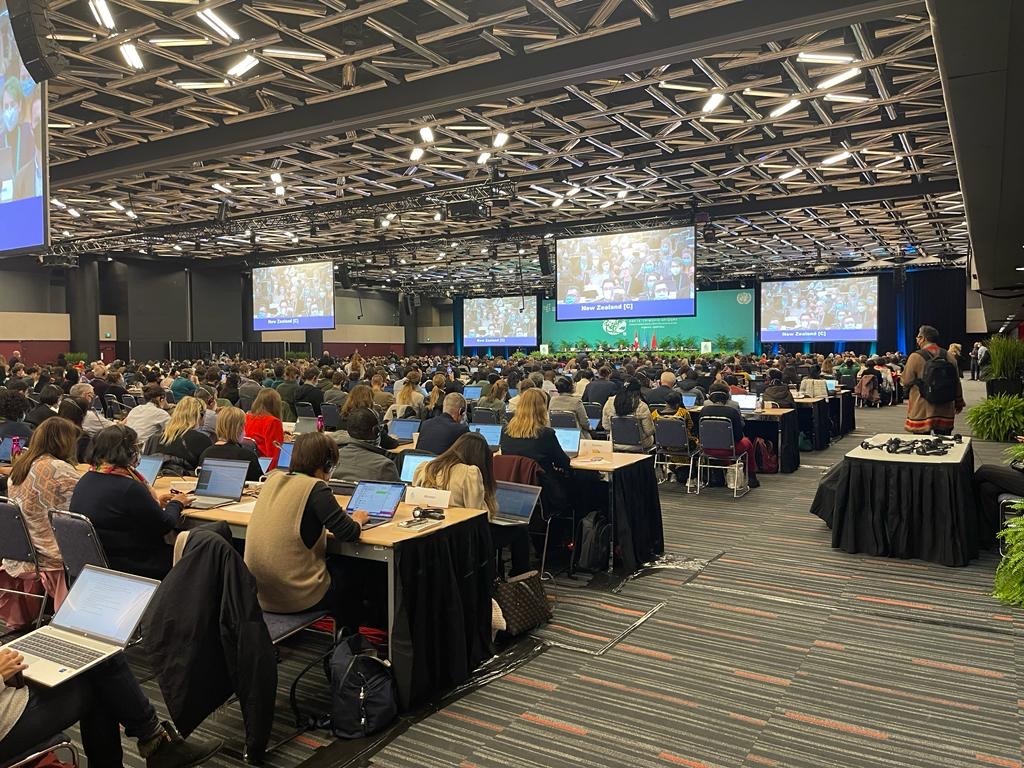 As the host nation for COP15, Canada has a significant role to play in ensuring its success. That means helping to land a global deal to halt and reverse nature loss across the planet, while committing to an ambitious national plan to meet our domestic target of protecting at least 30% of land and sea by 2030.

Meeting these ambitious goals will only be possible through collaboration – with federal, provincial, territorial, and Indigenous governments working together to make this conservation vision a reality.

To solve the biodiversity crisis, capacity in local communities must also be supported, ensuring that local management and stewardship can occur. Large-scale conservation funding is required for restoration and conservation initiatives, which hold a significant opportunity to create sustainable jobs (e.g. Indigenous Guardians) that focus on nurturing rather than exploiting nature.

Keeping the ocean in the room, amplifying Indigenous-led initiatives and holding Crown governments accountable to their commitments are some of the main reasons we are attending COP15. West Coast’s lawyers will be working to advance these key priorities and more throughout COP15, and beyond. Stay tuned for our reflections following the conference to see what progress has been made, and what’s next in our efforts to advance legal solutions for nature.