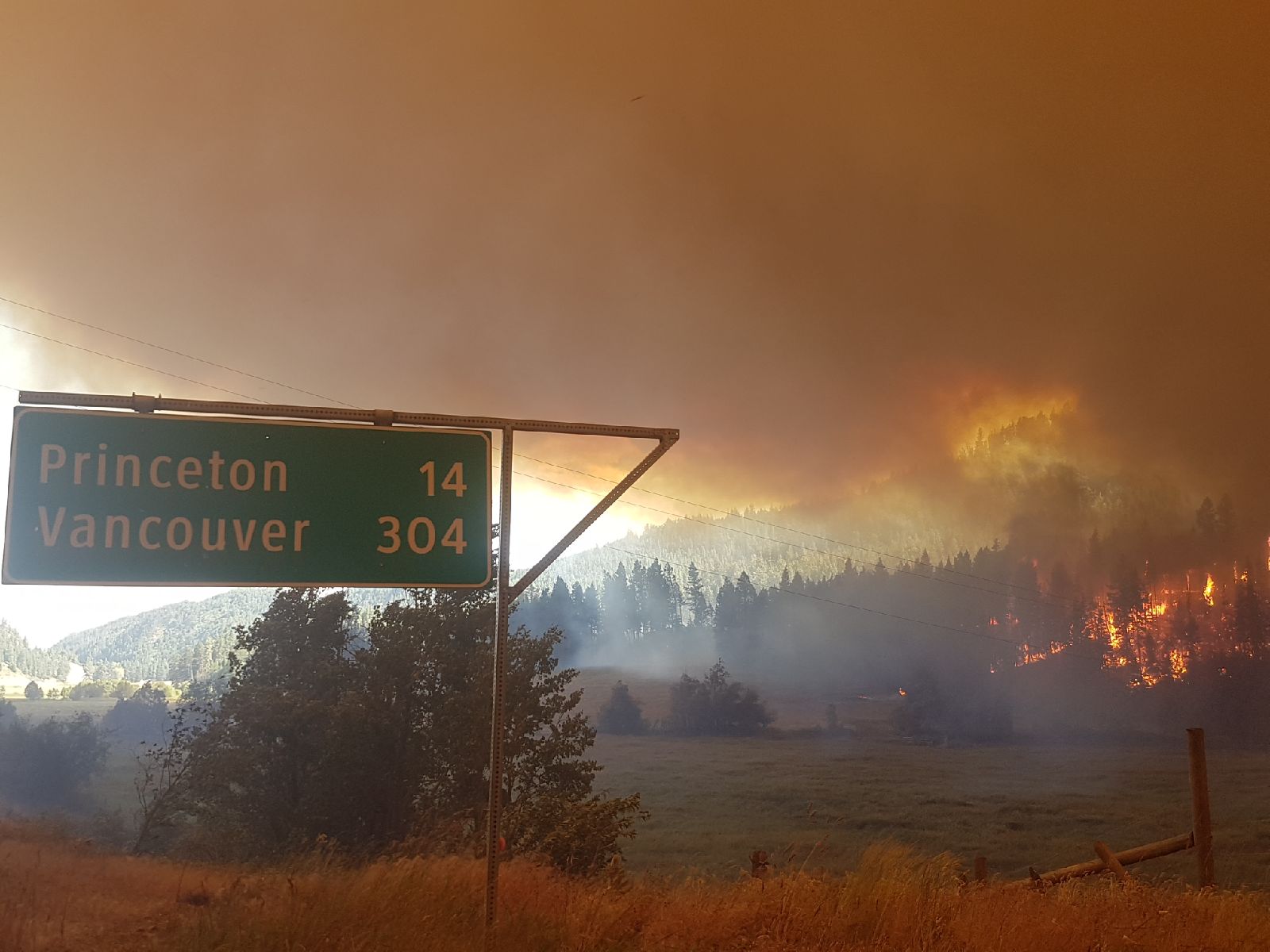 [Update 24 July 2017 - As of yesterday (23rd of July) the BC Wildfire Statistics page reports that 372,719 hectares have been burnt so far this year.  That means that in terms of area burnt this year is now worse than the massive fires of 2014 (which destroyed 369,169 hectares and were previously the largest in at least 25 years). BC wildfire staff are emphasizing that the current number of wildfires is not abnormally high for this time of year.]

The forest fires currently raging across BC, driving people from their homes, leave me with a sick feeling in the bottom of my stomach. I’m safe – my home is not threatened – but I know people in these communities and have worked with them to protect their air, water … forests, communities.

And, as a climate activist, it makes me feel sick because this is just the beginning. We’re going to see more wildfires. More floods. More landslides. This is what the face of climate change looks like.

The easy thing would be to pretend that this isn’t happening to our province. But to deal with the new normal, we need to tackle the reality of climate change and the continued role of the fossil fuel economy in our society.

Now at this point, I can hear people saying: “Oh – you can’t be sure that the hot weather in June and early July was because of climate change, or that the wildfires (started by lightning strikes and human stupidity) were made worse by it.”

Climate science is getting better and better at making the links between human-caused warming and events such as wildfires, and maybe if some scientist did the research we would get an answer (as they did recently for June heat-waves in Europe). But it doesn’t really matter whether these particular fires were made worse by climate change – because we know that as a general rule BC will have more and worse wildfires due to climate change.

Don’t take my word for it – the Province of BC’s own wildfire management strategy warns:

Climate models indicate that by 2050 … [s]ummers throughout the province may warm by an average of 2-3˚C, and the southern and coastal regions are projected to become drier in the summer. Provincial records show that the wildfire season has been increasing in length by one to two days per year since at least 1980. At the current rate, by the middle of this century, some areas of the province may experience forest fires year-round. Science also suggests that the frequency of lightning-caused fires will increase. [Emphasis added] 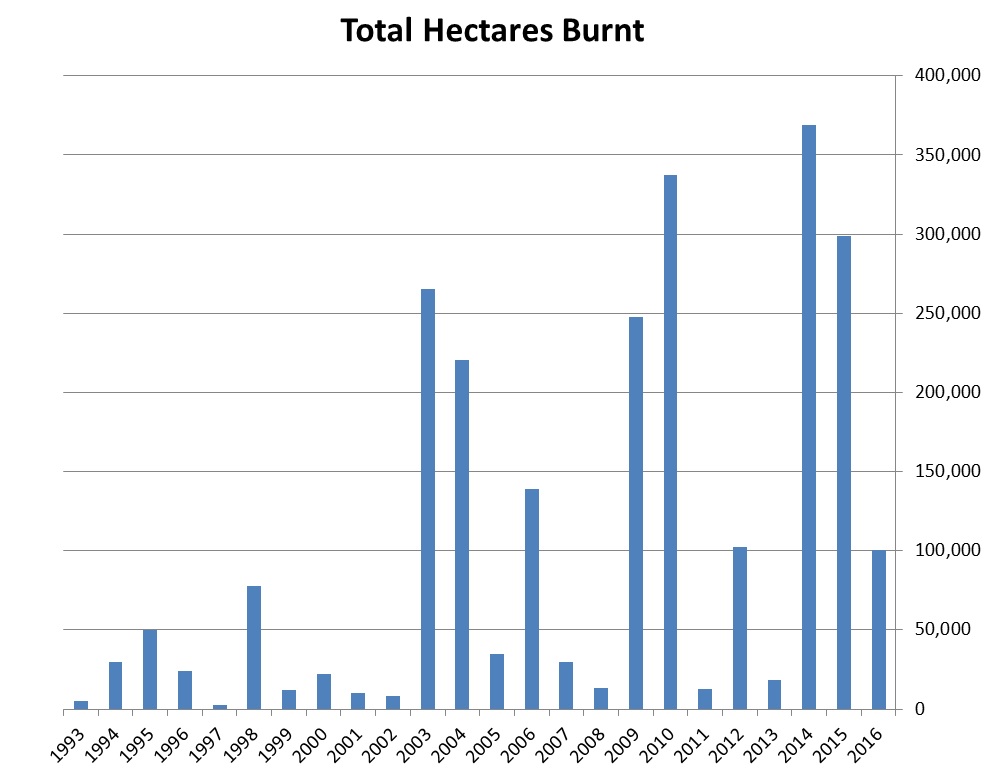 Graph based on BC Forest Service Wildfire Statistics, 1993 to 2016.

Despite the devastation wrought so far, it is not certain that this year will top other years in terms of hectares burnt. At time of writing over 160,000 hectares have burned this summer, which is a huge amount for this early in the season, with no immediate signs of relief, but as yet still well below the totals of some other years. What makes this year particularly shattering is the number of large fires near towns and villages – resulting in the displacement of tens of thousands of BC residents.

Not every year will see out-of-control wildfires, and not every wildfire is the result of global warming, but hotter, drier summers mean more difficulty in controlling wildfires.

Is our fossil fuel economy really so profitable?

Right now the assumption is that the costs of battling these wildfires, relocating families driven out of their homes and rebuilding communities will rest with the impacted communities, their insurance companies, and the different levels of government. BC has established a $100 million fund to help those displaced, and the federal government is also offering assistance. The complete costs of fighting the fires won’t be known for some time, but it seems likely that it will be in the hundreds of millions, although presumably less than 2015’s record-setting $380 million.

Meanwhile, the Chevrons and Exxon Mobils of the world continue to exploit their oil reserves to great profit without paying any of the resulting wildfire costs.

As long as we have that disconnect between the costs that our communities are paying and the profits that fossil fuel companies are making, the fossil fuel industry will continue to appear profitable. Governments will continue to favour pipelines over climate action, and investors will choose tar sands over solar farms.

We can’t turn off fossil fuels tomorrow – but we can insist that the costs incurred because of the fossil fuel industry be shared by that industry (as the District of Highlands did recently by sending the world’s first “climate accountability letter” to 20 fossil fuel companies).  It’s not fair that 100% of those costs be paid for by our communities, and our taxpayers. And it’s not fair or economically efficient that renewable energy and electric transit need to compete against an industry that won’t take responsibility for its own mess (not to mention the massive subsidies it receives – $3.3 billion in Canada alone).

Tomorrow’s forest fires are going to continue to get worse – and worse – as long as our economy continues to be based on fossil fuels.

Or, we can start to shift to a new, sustainable economy by recognizing the true costs that fossil fuels are imposing on our communities.