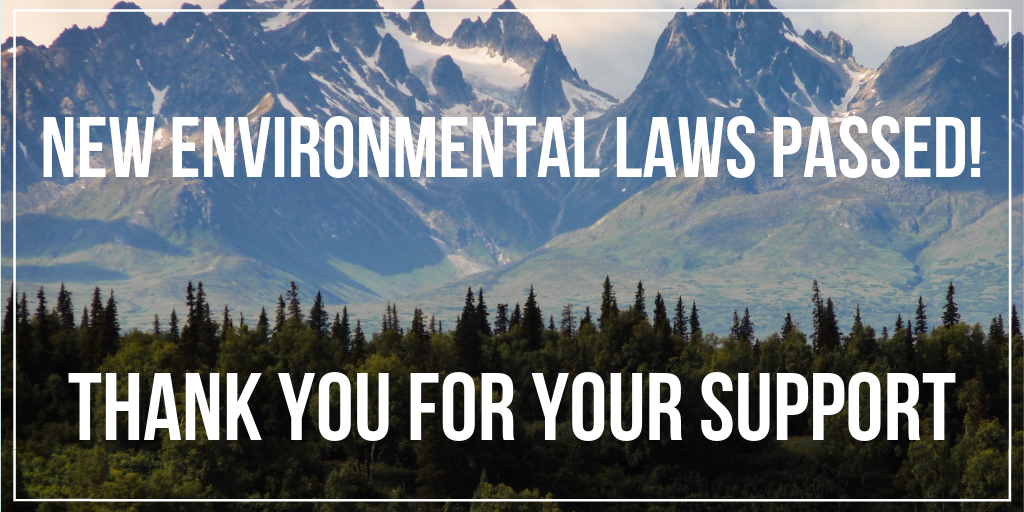 Law reform is our specialty at West Coast Environmental Law.  We work at all levels of government to transform the legal landscape and strengthen the laws that affect land, air and water.

This month, we’ve seen our efforts pay off with the passage of four federal bills that we were deeply involved in and that significantly strengthen Canada’s environmental safety net.

In 2012, we were on the front lines of the fight against the environmental law rollbacks that saw drastic reductions in protection of fish and water, citizens shut out of decisions that matter to them, and the fast-tracking of pipeline approvals. By tracking the effects of the rollbacks and making sure that politicians of all stripes heard loud and clear that Canadians want strong environmental laws, we helped secure commitments by the federal government to strengthen legal safeguards for the environment.

Now we’re celebrating the passage of these environmental laws – which reflect countless hours of work by our entire team, allies across the country, and by so many concerned community members.

Here’s how West Coast helped get these four important laws past the finish line, working closely with our allies, friends and collaborators across the country:

No oil tankers in the Great Bear Sea!

The Oil Tanker Moratorium Act, Bill C-48, is a victory for all who care about the magnificent Pacific coast, and particularly for north coast residents and Coastal First Nations who would bear the brunt of any oil spill from tankers. We’ve seen the risks these tankers pose: thirty years after the Exxon Valdez spill in Alaska, lingering after-effects remain.

West Coast has been intimately involved in efforts to defend the North Pacific coast from the threat of oil supertankers since the 1970s, when we were a major participant in the West Coast Oil Ports Inquiry. Through the decades, we participated in multiple federal and provincial reviews that have made a moratorium on oil tankers (and oil development generally on the north coast) one of the most reviewed, studied and debated environmental policies in Canada’s history.

With the threat of the Enbridge Northern Gateway tankers and pipelines project gaining momentum a decade ago, the need for a permanent, legislated ban on oil supertankers took on a renewed urgency, and we worked hard to catalyze the many private members’ bills and Parliamentary motions that were the precursors to Bill C-48.

We were successful in securing a federal government commitment to “formalize a moratorium on crude oil tanker traffic on British Columbia’s North Coast” in 2015, and never looked back. Our efforts accelerated in the past four years, involving countless meetings with government, detailed analyses, production of lengthy notes and explanatory guides for the public, multiple rounds of testimony to House of Commons and Senate Committees, as well as briefings to individual MPs and Senators. We combed over old records, spoke out in the media to dispel the myths surrounding this bill, and most of all, worked in close collaboration with Indigenous allies and north coast community groups who have been pressing for this bill for over half a century.

Now that the bill has passed, the new legislation will prohibit large oil tankers from docking, loading or unloading in the waters surrounding the Great Bear Rainforest – protecting this special region and its salmon, wildlife and sustainable local economies from the risk of major oil spills.

The Impact Assessment Act, included in Bill C-69, will transform the way projects are reviewed with a new impact assessment process that focuses on sustainability. This bill also reforms key Canadian laws related to energy regulation and the protection of navigable waters.

West Coast traversed the country to host workshops on impact assessment; participated in expert reviews; convened professors, scientists, and fellow environmental law groups to develop recommendations and reports; provided witness testimony; produced a Q&A that debunked the many myths about C-69; and met with officials in Ottawa to push for stronger provisions in the law.

While the new legislation isn’t perfect, it’s a huge step forward for environmental decision-making in Canada. Canadians will now have a stronger, more democratic review process that considers key issues like climate change, and gives the public a voice in decisions that affect land, air and water.

The Fisheries Act, Bill C-68, is not only back on track to once again protect essential fish habitat all across the country – the new-and-improved version will also address 21st century fisheries management.

We called on the government to restore habitat protection for all fish all across Canada and bring back what we “HADD” (the prohibition on Harmful Alteration, Disturbance and Destruction of fish habitat). We also pointed out in our brief Habitat 2.0 that zero prosecutions for fish habitat damage in a six-year period was a sign of a legally unworkable act.

For the past several years, West Coast worked closely with a wide range of scientists, community groups and elected representatives to reform the Fisheries Act. We produced numerous briefs and a widely-read Q&A, and we testified multiple times to Parliamentary Committees.

A strong coalition of groups worked to insert key changes into the Act – including a new public registry with information about authorizations, permits, orders and codes of practice; requirements to rebuild fisheries to healthy levels; and protection for environmental flows, the ‘master variable’ for stream health. We also supported Indigenous allies to get better recognition for Indigenous knowledge and to improve fisheries co-governance.

Oceans 2020 – reaching targets and beyond!

Amendments to the Oceans Act, in Bill C-55, will make marine protected area (MPA) designation faster and more effective, with complementary amendments to the Canadian Petroleum Resources Act to allow relinquishment of oil and gas interests in these special parts of the sea that we set aside for protection. Once again, West Coast was there in force to secure these amendments, and help the government reach its ambitious, strongly supported, and much-needed marine conservation targets.

We held an influential workshop in Ottawa celebrating the 20th anniversary of the Oceans Act, and worked closely to improve the Act’s sluggish procedure for creating MPAs. West Coast is pleased by amendments that reflect our advocacy, pressing the government to focus on ecological integrity for parks in the water just as we do with our laws for parks on land.

This multi-year effort entailed countless hours preparing briefs, analysis and testimony. We met regularly with colleagues in Indigenous nations, at Fisheries and Oceans Canada, and in the academic worlds of law, natural and social science. And once again we worked closely with our collaborators in the conservation community through a new partnership, SeaBlue Canada, to strengthen Canada’s flagship ocean law.

Meanwhile, we celebrated a related victory when the government committed to prohibit harmful activities like oil and gas development in MPAs. West Coast burned the midnight oil to secure stronger protection standards for MPAs, working to link science and law, and issuing repeated calls for reform.

We couldn’t do it without you

Many of our supporters have reached out to thank us for our role in reforming these key laws. We are so grateful for the messages we have received, from a wonderfully diverse set of people, from sea to shining sea (even from supporters over in Newfoundland and Labrador). These important federal laws will strengthen our environmental safety net, and we are proud to have played a role in helping them get passed.

Of course, these legal wins would not have been possible without the help of our donors, funders, supporters and allies. Thank you for all the support and contributions!

Together, we’ve made great strides to strengthen legal protection for the environment and future generations.