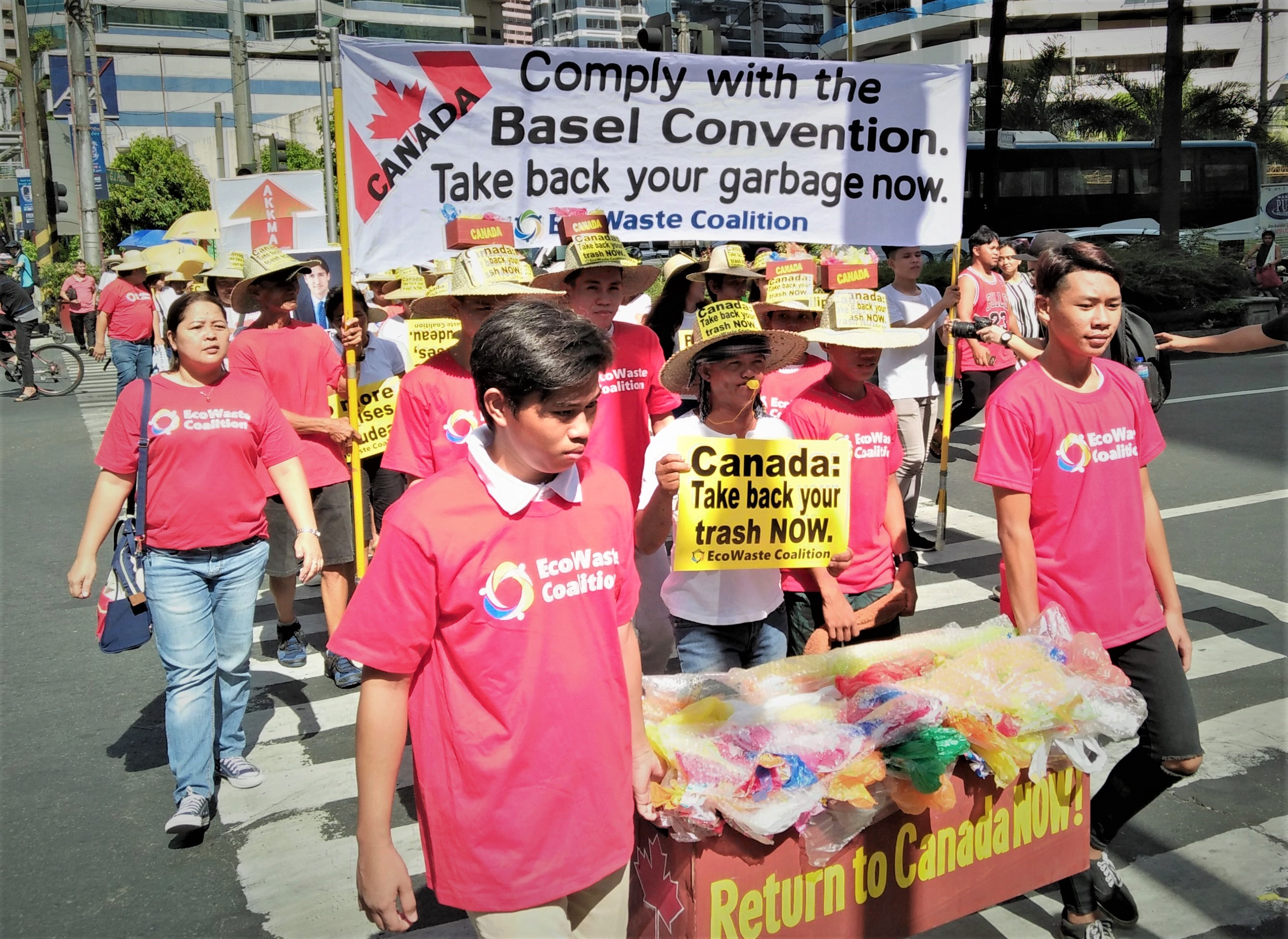 Photo: Ecowaste Coalition of the Philippines

This is a guest post by Kathleen Ruff, Director of RightOnCanada.ca. With support from our Environmental Dispute Resolution Fund (EDRF), Kathleen sought a legal opinion to determine whether Canada’s refusal to bring back Canadian wastes exported to the Philippines violated international law.

For years, the Philippines has been demanding that Canada take back containers of rotting trash that were shipped overseas to a port near Manila. The dispute made international headlines recently, highlighting Canada’s violation of an international treaty called the Basel Convention – and now the remaining containers are finally headed back home.

What is the Basel Convention?

The purpose of the Basel Convention is to stop western consumer countries from exporting their wastes to developing countries. Wastes should be reduced to a minimum and disposed of in the country where they were generated, the Convention states.

However, the Convention is weak, requiring only that “prior informed consent” be obtained before exporting wastes to a developing country – a provision that can be and is easily flouted.

The Convention has been ratified by Canada and 186 other countries. When the Basel Convention was first written, it included a provision that, should the Convention prove ineffective, countries would consider amending it to outright ban the export of hazardous wastes. This is exactly what the European Union, the African group of countries and other developing countries are striving to do. And they are getting close to succeeding.

In May 2019, countries attending the Basel Convention Conference in Geneva approved a decision that called on all countries to support an amendment (called the Basel Ban amendment) that would ban the export of hazardous wastes to developing countries. The amendment needs the support of only two more countries to come into effect.

But Canada is opposing the amendment.

Canada knows how easy it is to flout the Convention, since Canada has for the past six years violated the Convention. In 2013 and 2014 thousands of tons of wastes from the Vancouver area were exported to the Philippines by an Ontario company, Chronic Inc., which subsequently went out of business.

As well as violating Philippine law, the export of the wastes also violated the Basel Convention, which applies to household wastes and wastes deemed hazardous under the law of the country to which the wastes are exported.

The Basel Convention forbids the export of such wastes where consent by the importing country was obtained through falsification, misrepresentation or fraud. The Convention also forbids export where the contents of the shipments did not conform in a material way with the declarations provided within the notification and movement documents that accompanied the shipments. On both counts, the export of these Canadian wastes was illegal.

Once the Canadian government was notified in 2014 of the violation, it was legally obliged by the Basel Convention to take immediate responsibility for managing the wastes and to ensure their return to Canada within 30 days either by the company or, failing that, by the government itself.

The previous federal government showed utter disregard for Canada's legal obligations under the Basel Convention, saying that it was a “private matter,” and tried to make the Philippine government dispose of the wastes.

After Prime Minister Trudeau took office in 2015 he visited the Philippines twice, and each time he was challenged to take action to return the wastes to Canada. In November 2015, while attending the Asia Pacific Economic Cooperation Summit in Manila, Trudeau said that he was aware of the Canadian trash dumped in the Philippines and said a "Canadian solution" was under development. No action ensued.

The Canadian government ignored the court order and continued its violation of the Basel Convention, refusing to take responsibility for the illegal Canadian wastes.

In 2017, Prime Minister Trudeau was again confronted to take action to deal with the wastes while attending a meeting in the Philippines. He stated, without explanation, that legal barriers prevented Canada from complying with the Basel Convention, adding that, “it is now theoretically possible to get it back.”

The Ecowaste Coalition of the Philippines, a non-profit environmental network of over 140 public interest groups, had for five years appealed to the Canadian government to obey the law and take back the wastes. They did not even receive a response to their letters.

In January 2019, with the support of our internet advocacy organization RightOnCanada.ca, the Ecowaste Coalition wrote to Prime Minister Trudeau, stating, “This dumping of Canadian wastes in the Philippines is immoral and illegal.”

They asked the Canadian government to:

When the Canadian government did not respond, Canadian and international environmental organizations wrote to the Prime Minister, repeating the same two demands.

Again, the government did not respond.

In the face of continuing, massive media attention around the world, Prime Minister Trudeau finally stated that Canada's conduct had been “unacceptable.” Environment Canada issued a statement that Canada would now comply with its international environmental obligations and had hired a company to ship our wastes back to Vancouver.

Thanks to solidarity between environmental groups in the Philippines and in Canada, and collaboration between activists and legal experts, after six years of flouting an international environmental law, the Canadian government was finally forced to comply.

This is an inspiring victory, particularly because it has sparked enormous public attention in Canada and around the world and opened up serious debate on the issue of wastes. It has highlighted the fact that on both an environmental and human level, shipping wastes overseas to developing countries is not an acceptable solution.

It is an excellent development that the federal government has now announced that Canada will ban "harmful single-use plastics and hold companies responsible for plastic waste." However, the government's refusal to support the Basel Ban amendment means that companies may increasingly make use of the convenient tactic of shipping our plastic waste overseas to developing countries, as we did with the wastes we dumped in the Philippines and Malaysia. A recent poll shows that Canadians overwhelmingly want this practice stopped.

Serious questions must be asked. Why is there no enforcement mechanism for international environmental laws, as there is for trade agreements? Why this double standard? Do financial interests trump the health of the planet? And why did our government act as an environmental law breaker for six years until forced by environmental activists and media attention to obey the law?

As always, the battle continues. While environmental activists have won their first demand that the government bring back our wastes, the government has, to date, rejected our second demand by continuing to oppose the Basel Ban amendment. By doing so, Canada is undermining the very goals and mission of the Basel Convention itself.

This is not the environmental leadership we were promised.