Dilbit Dogma: On Pipelines to Tidewater 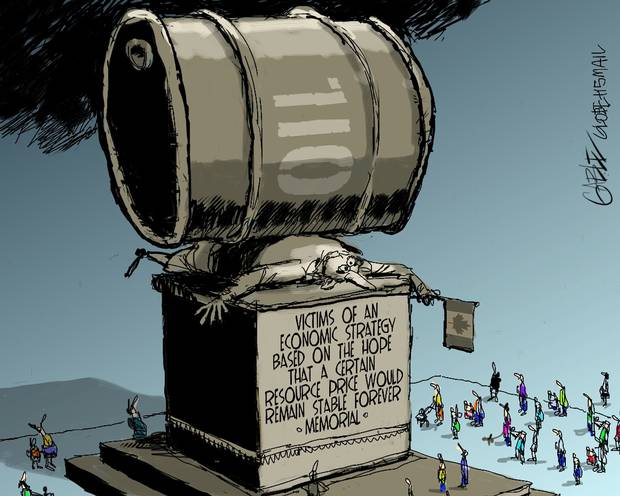 According to pipeline supporters and cheerleaders, one of the primary rationales for building pipelines to tidewater – Canada’s east or west coast – is to maximize the price that Canadians can get for tar sands oil by reaching world markets. It has been repeated so many times that it has become something of dilbit dogma. The argument goes like this: we need a pipeline to tidewater because it will unlock new markets overseas (usually Asia) where we can get a better price for Canadian oil than we would without those pipelines. Sound familiar?

A number of years ago this argument may have been true, especially when you ignore the economic, environmental and social costs not captured by market prices (which economists call “externalities”).

But we live in a different world today. Oil prices have plummeted and are forecasted to stay low for some time. The US is now a major producer of oil that is cheaper than that from the oil sands, and it recently lifted its 40-year ban on exporting oil. In addition, solar and wind power are now “crushing” fossil fuels, with investment nearly double that of oil and coal combined in 2015. And finally, the world came together in Paris and agreed to aim to hold global temperature increase to 1.5°C, which necessarily requires a decarbonization of the global economy.

All of these factors mean that the economic case for getting oil to tidewater by pipeline in Canada has evaporated. And people are starting to notice.

Ross Belot, a retired senior manager with one of Canada’s largest energy companies has written about the business case for pipelines falling apart. Just last week, he wrote that Alberta could build a dozen pipelines and it wouldn’t help. Here’s why:

Last month, a brief from Oil Change International debunked the economic myth of tidewater access and concluded that producers of Canadian oil are already getting the best possible price through existing pipelines to the US, which access the largest heavy oil market in the world.

The brief discusses why Western Canadian Select (WCS) – the key Canadian benchmark for heavy oil – trades at a discount to other benchmarks such as West Texas Intermediate (WTI), the primary benchmark for US Gulf Coast and Midwest oil. The two key factors are quality and geography: WCS trades for less than WTI because it is lower quality crude that is more expensive to refine, and it must travel longer distances to refineries.

Supply and demand factors have played a role in the past in depressing Alberta crude prices: “When the supply of tar sands crude exceeds either available pipeline capacity or the ability of refineries at the terminus of those pipelines to process it, the price of tar sands crude goes down relative to other crudes in the market.”

Indeed, for a period in 2013-2014, there was a bottleneck in the US Midwest to the Gulf Coast and WCS was trading at a deeper discount – an average of $24/barrel, with daily peaks that surpassed $40. However, since that time, enough new pipeline capacity has come online in the US to alleviate the bottleneck, and “effectively eliminate the market-driven portion of the price differential.”

In the last year, the WCS discount has shrunk to the $12-14 range to account for the unavoidable quality and geographic considerations discussed above.

In fact, there is now surplus capacity that, according to the International Energy Agency, would allow for additional Canadian exports to Asia without the construction of either Kinder Morgan’s Trans Mountain expansion, Enbridge’s Northern Gateway or TransCanada’s Energy East pipeline. Instead, they could follow existing routes including pipelines to Oklahoma and the existing Trans Mountain line to access Asian and OECD (Organization for Economic Cooperation and Development) markets.

But accessing those markets would not necessarily get Canadian producers a better price. In addition to paying the transportation costs, there would be additional costs of shipping the crude to Asia and elsewhere.

The Oil Change International brief concludes that “if sent to Europe or Asia, tar sands crude would fetch notably lower prices than in the U.S.” It reaches this conclusion by comparing the prices achieved by a similar heavy sour crude benchmark, Mexican Maya, which over the past 15 months was priced, “on average $3.70 less in Europe than in the U.S. Gulf Coast and $8.73 less in the ‘Far East’.”

Accessing Asian and European markets doesn’t address the quality and geography discounts that WCS currently faces. In fact, those discounts may be even steeper in Europe and Asia, which are a lot farther from Canada than Oklahoma. One of the impacts of the US lifting its export ban was that the WTI benchmark and European Brent Crude benchmark became much more aligned, meaning that the ‘world price’ for oil (Brent) is more or less the same as WTI. This supports the conclusion that Canada is already getting the best price for its oil with current pipeline capacity.

Former CIBC chief economist Jeff Rubin also released a paper in March 2016, entitled The Future of Canada’s Oil Sands in a Decarbonizing Global Economy. In his paper, Rubin argues that two factors threaten the future of the oil sands, and neither of them is the lack of pipelines.

First and foremost, the collapse of global oil prices has hit high-cost oil sands producers the hardest. Oil sands crude is one of the most expensive types of crude to extract, so as marginal producers in the world supply chain, oil sands producers gain the most from rising prices but are also the most vulnerable to plunging prices. Indeed, 17 projects totaling US$47 billion have been cancelled or indefinitely postponed in Alberta’s oil sands, representing 8.2 billion barrels of oil or 1.3 million barrels per day of production. Those projects make up nearly half of the 33 largest oil and gas projects cancelled around the world in 2015.

“Why build pipelines to sell oil at prices that do not even cover the cost of getting them out of the ground? Like the production they were intended to carry, none of the proposed new pipelines have an economic context in today’s oversupplied oil market.”

Rubin’s second factor centres around the historic Paris Agreement at COP21, where world leaders agreed to pursue efforts to limit global warming to 1.5°C, which will require a massive decarbonizing of our energy economy. This shift will not only squeeze out high cost producers (such as the tar sands) from the global carbon budget, but it will require a decrease in the demand for oil. That means many oil reserves will have to be left in the ground, and the pipelines that serve them will become stranded assets long before their expiry dates. Those stranded assets become liabilities for pipeline companies that expected them to be used for their full useful life.

But oil prices will bounce back, as they always do, right? Not according to BP Chief Economist Spencer Dale, or Governor of the Bank of England (and former Bank of Canada Governor) Mark Carney, who have concluded that, with the increasingly aggressive actions on climate by governments all around the globe, the fossil fuel glory era is nearing its end.

The Trudeau government prides itself on evidence-based decision-making and being sound economic managers. Let’s hope that he and his team can understand that accessing tidewater will not save the Canadian oil industry – on the contrary, it may cost them more. Instead, we should be focusing on transitioning to a renewable energy economy, for example by training former oil sands workers to install solar panels,so that we can move beyond last century’s model.

West Coast Environmental Law has been opposing tar sands pipelines for nearly a decade because of their contribution to climate change, First Nations and community opposition, oil spill risk and the inability to clean them up, and because the risks far outweighs the benefits. Those benefits have shrunk even more.