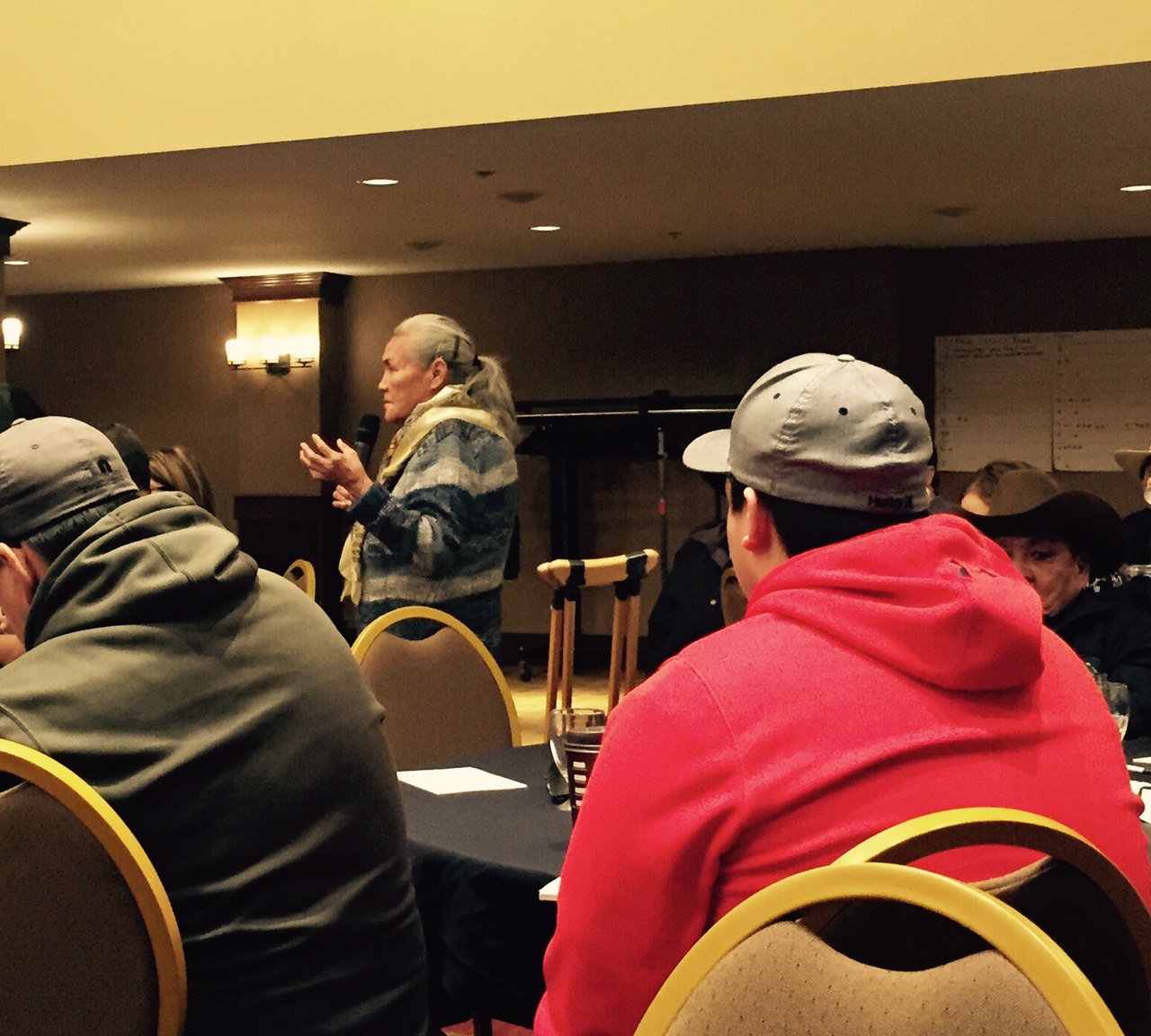 In February I attended a Moose Management Summit in Treaty 8 territory at Fort St. John in northeastern BC. The summit was attended by over 100 trappers, hunters, Elders, Chiefs and Councillors, and environmental monitors representing Prophet River, Doig River, Blueberry River, West Moberly, Saulteau, Fort Nelson, and CASCA First Nations. Also present were representatives from the BC Ministry of Forests, Lands and Natural Resource Operations.

The summit was held to address Treaty 8 First Nations’ concerns about the state of moose in their territory. The word for moose in Dunne-zah is “Huuda,” which literally translates to “that which keeps us alive.”

A number of themes were addressed at the summit, including the impacts of the cumulative effects of industrial development projects in northeastern BC on moose habitat and health, predator management (wolf culling and grizzly bear monitoring), and the existence of “traditional ecological knowledge” (TEK) and western science on moose.

I put “TEK” in quotation marks in deference to the objection that some Cree and Dunne-zah people at the conference expressed about the term. As one Elder said, the word “traditional” can evoke a sense of being in the past, whereas the reality is actually quite the opposite. The knowledge held by Cree and Dunne-zah hunters who are regularly out on the land is cutting edge, and, in the words of the Elder “up-to-date five minutes ago.”

One of the most striking tensions that emerged from the discussions between Treaty 8 First Nations and Provincial representatives at the summit was over the framing and scoping of the threat to moose health. The Province, for its part, focused almost exclusively on the threat to moose by non-human predators (wolves), and emphasized wolf-culling as a strategy to help ensure stable moose populations moving forward.

In contrast, Indigenous participants, while acknowledging the threat to moose from wolves (particularly as growing numbers of  seismic lines and logging roads facilitate easier access for the wolves) more broadly cited unprecedented levels of industrial development in their territories as constituting the greatest threat to moose populations. In addition to extensive mining, forestry, and hydroelectric dams, Treaty 8 territory is also dotted with tens of thousands of oil and gas wells, and criss-crossed by pipelines, seismic lines, and access roads.  These projects fragment Treaty 8 territory and make it difficult for large species of wildlife to forage enough food to survive.

Bud Napoleon, a long-time trapper and former Chief of the Treaty 8 Tribal Association, remembers accompanying his family on expeditions into the mountains on their family’s trapline beginning at the age of five or six. His parents carefully passed on their knowledge of how to kill and cut up a moose, and how to tan the hide and smoke the meat. As Fort Nelson First Nations member Caleb Behn expressed at the summit, moose are not just a form of economic sustenance but also permit the transmission of important cultural knowledge between generations. If moose are not available to hunt, children and grandchildren cannot be taken out on the land and shown how to hunt and prepare them. An opportunity not only for physical sustenance, but also for important cultural knowledge associated with the moose, is then lost.

Treaty 8 was signed in 1900 in northeastern BC and the terms of the treaty are clear that in exchange for opening their lands for settlement, the Indigenous signatories would be able to continue to practice their way of life.  At the time of the signing of the treaty, the Dunne-zah and Cree  inhabitants of the land hunted, trapped and fished on their territory, and were also able to gather plants, berries, and other resources for food, medicine, and other uses. Today, it is becoming increasingly difficult to engage in these activities across the territory due to environmental degradation.

Chief Marvin Yahey of the Blueberry River First Nation attended the summit and emphasized his concerns about declining moose habitat and the Province’s failure to adequately manage the cumulative impacts of industrial development in his people’s territory. In March of last year, Chief Yahey and the Blueberry River First Nation filed a ground-breaking lawsuit at the BC Supreme Court, suing the Province for breach of Treaty 8 due to the adverse impacts of cumulative development in Blueberry’s territory.

In a press release issued then, he stated that “Blueberry’s ancestors would not recognize our territory today. It is covered by oil and gas wells, roads, pipelines, mines, clear cuts, hydro and seismic lines, private land holdings, and waste disposal sites among other things … there are vast dark zones throughout our territory where we are no longer able to practice our treaty rights.”

An air of frustration and cynicism with the Crown was palpable at the gathering, as was a sense of determination and responsibility to deal with the problems. One Elder stated, “Time and time again we come to the table, and nothing is done.” Another asked, “Why can’t the things you are talking about have been done 20 or 30 years ago?”

A bright and powerful reminder of what is at stake in ensuring the well-being of the moose was provided at the summit by the Youth Moose Drawing Contest. Children and youth from across Treaty 8 territory submitted drawings of moose that showed their cultural importance. This art was displayed on the walls for the duration of the summit and reminded all participants of the stake that future generations have in the outcome of decisions made by adults today.