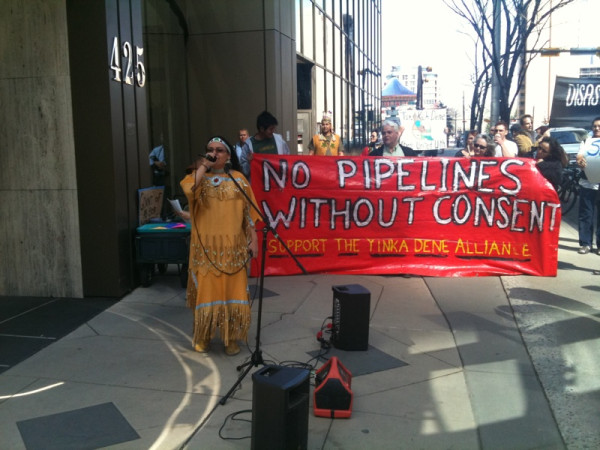 When Enbridge recently held its annual meeting of shareholders in Calgary, the company and the city’s business sector received a powerful message about the obstacles in the way of expanding tar sands pipelines to the Pacific coast. First Nations from BC, Alberta and Manitoba gathered together to express their firm conviction, to federal and provincial governments, and to the oil industry, that oil developments and pipelines must not be built on the traditional territories of First Nations without their consent. The events in Calgary marked the first time that First Nations from both inside and outside BC have made such a common statement in solidarity with each other, in relation to tar sands infrastructure expansion.

On Tuesday, May 10, representatives of the Yinka Dene Alliance – whose traditional territories would hold more than 25% of Enbridge’s proposed route – met with leaders of Alexander First Nation from Alberta, who hold territory near the beginning of the pipeline route northeast of Edmonton, the Blood Tribe and Lubicon Cree Nation, also from Alberta, and the Roseau River Anishinabe Nation, which has an Enbridge pipeline already on their territories in Manitoba. The Nations signed the Calgary Statement of Solidarity, which recognizes the Indigenous law-based positions taken by the Coastal First Nations in banning oil tankers, and the Nations of the Fraser River watershed in banning crude oil pipelines in their watershed. All of the gathered Nations stated together that “[t]he Enbridge Northern Gateway Pipeline and tankers project will expose Indigenous and non-Indigenous communities from the Pacific Coast across to Alberta to the risk of pipeline and supertanker oil spills”. They also stated that the urgency of climate change and its impact on Indigenous peoples compels them to take action. They concluded:

Enbridge states that it intends to proceed with its Northern Gateway pipeline and tankers, with or without First Nations consent. A decision by Canada to approve this project, without the free, prior and informed consent of affected Nations, will be a violation of our Treaties, our rights, and our laws, and will be in breach of the UN Declaration on the Rights of Indigenous Peoples and other international accords.

THEREFORE we stand in solidarity with the Coastal First Nations, and the Nations who have signed the Save the Fraser Declaration, and are united in stating that the Enbridge Northern Gateway Pipeline and tanker project, as well as other fossil fuel development projects including Keystone XL, must not proceed without obtaining the free, prior and informed consent of all affected First Nations.

AND FURTHER if such consent is not obtained, no construction of such projects shall proceed.

This Statement does not require the Nations who signed on to take any particular position about the project. However, each Nation makes a political commitment to respect the right of others to make a decision about the project – yes or no – and asks the government to respect those decisions. The statement marks a key milestone as it is the first time that First Nations in Alberta have made such a public statement, in unity with Nations to the west of the Rockies who firmly oppose the Enbridge project.

The next day, the First Nations who stood together delivered a unified message to the streets of Calgary, to Enbridge, and to the government. The songs and words of between 75 and 100 Indigenous people from across western Canada, supported by non-Indigenous allies, caught the attention of thousands of Calgarians who clustered at their skyscraper windows and along the street to see what all the noise was about. The message was unmistakeable: numerous Indigenous nations have already decided that Enbridge’s oil pipelines and tankers are against their Indigenous laws, and they are determined that the corporate world and governments respect their decisions.

This message wasn’t just broadcast to people on the streets. Representatives of the Yinka Dene Alliance attended Enbridge’s annual meeting of shareholders and had the opportunity to speak directly to executives, the board, and financial media. Inside the annual meeting, they spoke in a personal way about the impacts that Enbridge’s pipelines – and inevitable oil spills – could have on their people, lands and waters, if the project is built. They made clear that their decision not to accept the pipelines came after several years of carefully considering the project, including conducting their own study prior to making a decision (Download: summary of report; full text). That decision, they stated, is one that is based in their own Indigenous laws as Yinka Dene people, and is expressed in the Save the Fraser Declaration, signed in December 2010.

Various representatives of the Yinka Dene asked Enbridge CEO Pat Daniel repeatedly: will Enbridge respect their decision and their laws, respect their refusal to consent, and drop its project? Enbridge refused to answer this simple question. The first reason Enbridge repeated as to why it would not answer this question was an answer to the effect that “some things are inside Enbridge’s control and some things are outside Enbridge’s control.” What he appeared to suggest by this is that the federal regulatory process which will make a recommendation to the federal Cabinet about whether this project should go ahead is outside his control, and that if the feds approve the project, Enbridge will have to go ahead with it. This strikes us as a particularly poor answer, as it appears to pretend that Enbridge has no will of its own here; rather it’s at the mercy of the federal government. Similarly, Mr Daniel protested that they don’t want to build the pipeline without the consent of First Nations, but essentially cast himself as powerless to do anything about this... other than to try to “turn First Nations’ ‘no’s into ‘yes’es”.

At the request of the Yinka Dene Alliance I used my question time at the annual meeting to put these questions to Mr. Daniel again, after their representatives had spoken and he hadn’t given a clear answer the first times he was asked. I asked him whether Enbridge would respect the laws of the First Nations if the federal government did approve the project.  He didn’t answer my question either, but stated that he does not want to discuss hypothetical situations.

Now, a good portion of his remarks at the annual meeting were devoted to hypothetical, forward-looking statements about his company’s future prospects and performance.  Moreover, Enbridge could respect the laws of the Yinka Dene Alliance and other nations whose laws prohibit the pipeline at any point, simply by withdrawing their application for an environmental assessment.  However, the CEO nonetheless took refuge in his claim that the question of whether Enbridge would ultimately respect the decision of First Nations who say no to their pipeline project was too hypothetical to warrant an answer.

This question is at the very heart of what the First Nations representatives wanted to know from the company. It is what several of them directly asked him: will you respect us, our laws and our decision? Enbridge refused to answer.

Filling the void of Enbridge’s silence on this issue, the voices of the Yinka Dene who travelled to Calgary (and the Coastal First Nations who gathered in Prince Rupert in a mass of over 500 people, both First Nations and neighbours, the very next day) projected an answer that reverberated between the towers of downtown Calgary: no pipelines will be built, and no crude oil will be shipped on tankers, through Indigenous lands and waters without consent.

The risks to Enbridge

This is a message that should give Enbridge and its financiers pause. This weekend’s Globe and Mail Report on Business carried an extensive story in which former Harper environment and Indian and northern affairs minister Jim Prentice recognized the substantial power of the First Nations who oppose this pipeline. Other legal scholars went further, stating that First Nations have put up insurmountable barriers to this project, and predicting that the case will end up at the Supreme Court of Canada. The Financial Post also highlighted the growing costs and legal uncertainty surrounding the project, as a result of deep and resolute Indigenous opposition.

As covered in my previous post, the decisions of First Nations expressed in the Coastal First Nations Declaration and the Save the Fraser Declaration are an exercise of the constitutionally-protected Aboriginal Title over the lands and waters of their territories,and are arguably protected in international law – not only through the UN Declaration on the Rights of Indigenous Peoples, but by other agreements to which Canada is a party such as the American Declaration on the Rights and Duties of Man and legal decisions interpreting them (see our legal analysis of the Coastal First Nations Declaration, at page 2). While it cannot be predicted how Canada’s courts or international bodies would deal with this particular situation, or how the doctrine of “free, prior and informed consent” will be applied by those courts, it is clear that one or more First Nations may take steps to enforce these declarations under their own laws, through the Canadian courts, and/or through legal action at the international level. The result is highly volatile legal situation and a strong probability of litigation by one or more First Nations that could delay or potentially derail the Enbridge Northern Gateway Pipeline project.

As I wrote previously, the deep power of people using their legal rights and their political force are creating huge obstacles for Enbridge’s proposed pipelines and tankers. The serious presence of the Yinka Dene Alliance and allies at Enbridge’s annual meeting, and protesting outside of its headquarters, are a testament to that. Most of them had travelled 14 hours by bus just to make their voices heard. Given that the chorus of voices has now jumped the continental divide of the Rockies and is being heard in Alberta too, this power appears to be growing stronger.

Calgary Statement of Solidarity May 10 2011_0.pdf
Indigenous Law
Climate and Energy
Back to top