With more delays from BC floods, it’s time to rethink the Trans Mountain Expansion Project 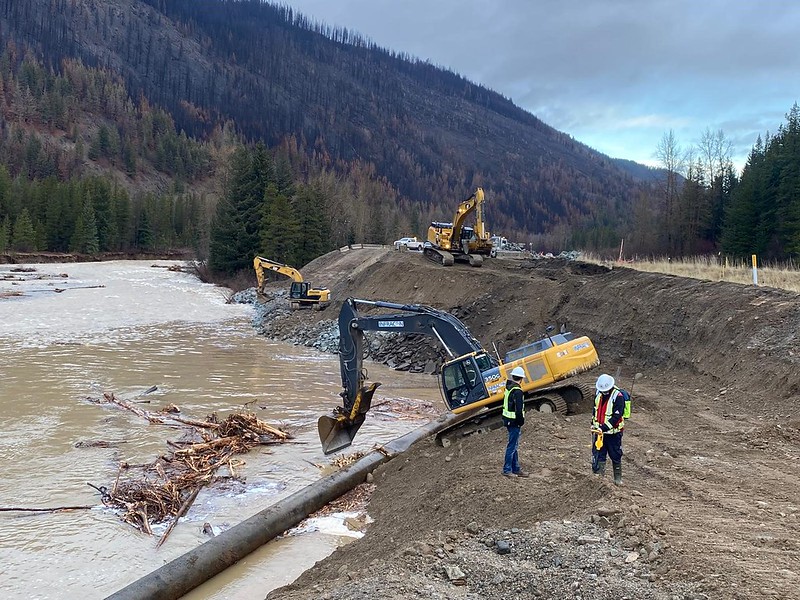 The catastrophic flooding in British Columbia will likely be the most costly climate disaster in Canadian history. 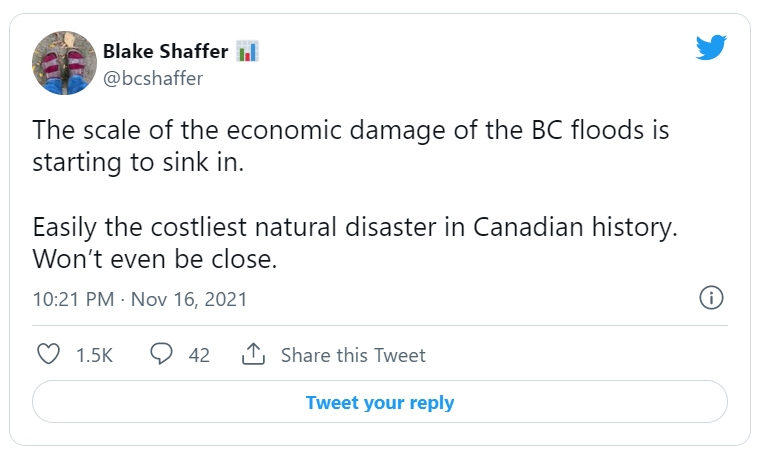 Thousands of people have been evacuated, stranded or displaced. Major highways and rail lines have been shut down, cutting off the Lower Mainland from the rest of the country, and isolating entire communities. The full extent of the damage and loss will not be known for months, but some of the grim reality is emerging.

All this only months after the devastating heat dome and forest fires that wiped out entire towns and killed nearly 600 people. Those same fires increased the impact of the record-level rainfalls on the landslides that contributed to the catastrophic damage. In addition to the series of atmospheric rivers, Metro Vancouver also experienced unprecedented bomb cyclones and a waterspout tornado in recent months. These are the impacts of climate change being felt while Canada is warming at twice the global average.

At a time when the human and financial costs of climate change are in such stark relief, it is hard to believe that our federal government is still talking about expanding oil pipeline infrastructure. But if the climate impacts of enabling oilsands expansion aren’t enough, skyrocketing costs, exacerbated by the floods and wildfires themselves, should cause them to pause.

Because of the flooding and mudslides, Trans Mountain shut down its existing pipeline on November 14, and it remained closed until December 5. Trans Mountain’s work has understandably been focused on assessing the condition of the 70-year-old pipeline, which was exposed in many areas due to the floods and landslides. The BC government introduced gasoline rationing in response to the shut down. 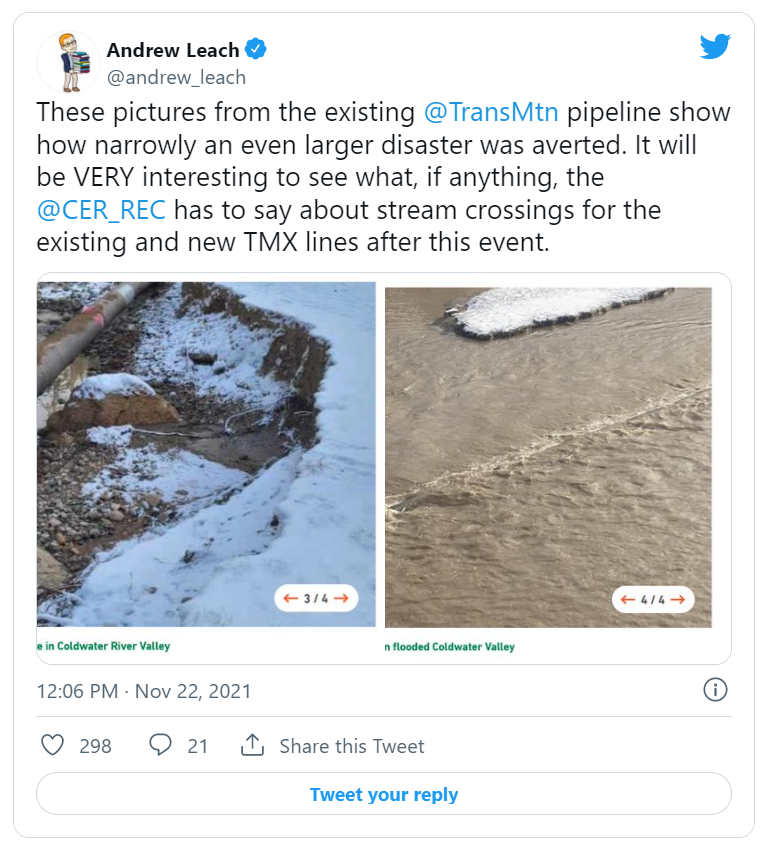 The shut down caused a lot of confusion and misrepresentation about the original Trans Mountain Pipeline (TMPL) and the Trans Mountain Expansion Project (TMX).

It is important to note that the Trans Mountain Expansion (TMX) project would not have alleviated the current gas supply situation. Firstly, the floods and landslides, which caused the original TMPL to be shut down, would have shut down the TMX as well, were it in service today as originally planned. It is a miracle that the original pipeline has not sustained more serious damage, but with triple the capacity and volume of oil enabled by the expansion, the risk and consequences of a spill also increase.

Secondly, TMX has always and only been about the export of diluted bitumen, and not about supplying fuel to BC. Diluted bitumen cannot be processed by local refineries. The original TMPL has more than enough capacity to service the fuel demand of southern BC, as it has for decades.

Indeed, the floods should be a catalyst to accelerate the shift away from a dependence on fossil fuels towards renewable resources with distributed generation, requiring less linear infrastructure that makes us all more vulnerable to catastrophes. This is especially true in light of the inevitable delays and cost increases to the expansion project caused by the floods. 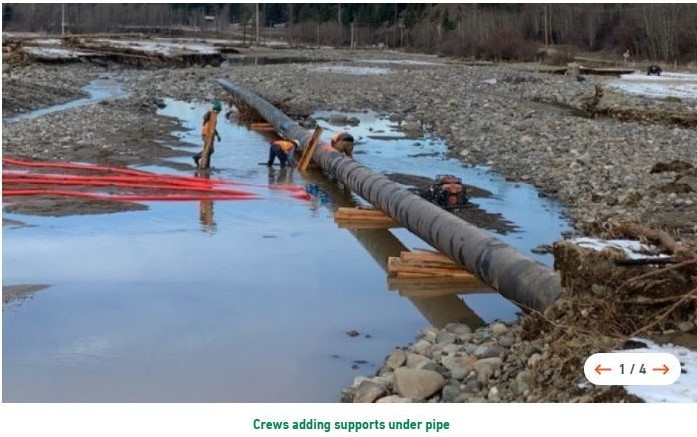 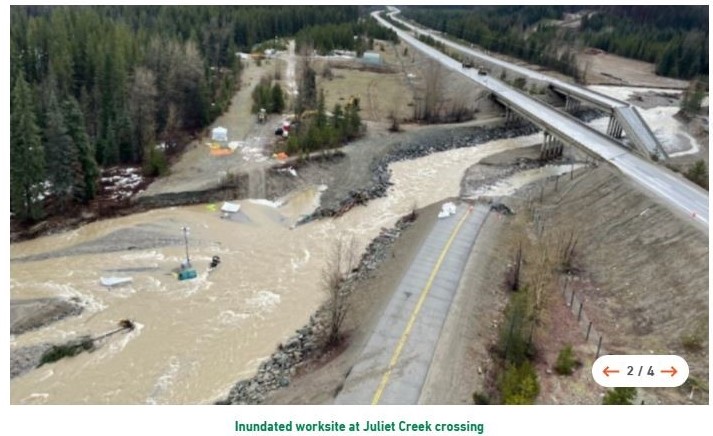 The expansion project is now significantly delayed and overbudget

Work on the Trans Mountain Expansion project has experienced a significant setback due to the floods and landslides. Construction and stockpile sites for the pipeline expansion, which run along the now-closed highways, have been under water or landslide debris for the 200 kilometers between Abbotsford and Merritt. The extent of the damage to equipment and worksites, and the length of resulting delays, are still unknown. But it will certainly be substantial and must force a reconsideration of the economic benefits of the pipeline itself.

The Laidlaw stockyard near Hope, BC was underwater following the floods. Source: Tina Laursen on Youtube

According to Trans Mountain’s 2021 Q3 report, $9.9 billion has been spent to complete 37% of the pipeline as of September 30, 2021. Just based on these numbers it is clear that the $12.6 billion construction estimate from February 2020 will be exceeded by a significant amount. The damage caused by the floods and landslides – which have washed away an unknown amount of the progress in two large segments of the pipeline route – will likely add tens of millions if not billions of dollars to the cost, and cause delays of one year or more.

Trans Mountain has been quiet on this issue. In their December 1, 2021 construction schedule filed with the Canadian Energy Regulator, the Crown Corporation stated:

At this time, the effects of the extreme weather events and flooding in BC on construction progress are undetermined and as such are not reflected in the current schedule. As effects are assessed and plans updated, Trans Mountain will update the schedule.

In September, West Coast Environmental Law released a report chronicling the myriad of delays and challenges facing the project. The report found evidence of delays in every segment of the pipeline route, pushing construction well into 2023, and projected that the cost was likely approaching $20 billion. Some of these delays were related to the heat dome and forest fires – in particular the July Mountain wildfire which engulfed the Coquihalla highway in August 2021 and resulted in evacuation orders that caused adjacent pipeline construction to be paused. This same area is now closed due to multiple landslides, with extensive damage to the highway. It is almost certain that some of the right of way preparation and other preparatory work has been wiped out, and it is not clear if the right of way is even viable anymore, potentially requiring a route redesign.

This is a major setback for the Trans Mountain Expansion Project. Vice President David Safari swore in an affidavit last year, that if the work on the Coquihalla Summit wasn't completed by the end of 2021, it would delay the completion of the pipeline by up to eleven months and cost an additional $60 million. Again, this doesn't include the cost of the now necessary site remediation and repairs. The full cost of these setbacks will be much higher as construction is delayed indefinitely. 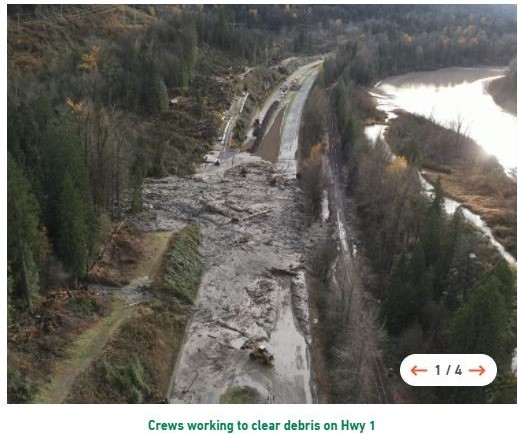 Source: Trans Mountain website (November 19, 2021). Note the pipeline running along the highway, just beyond the mudslide. 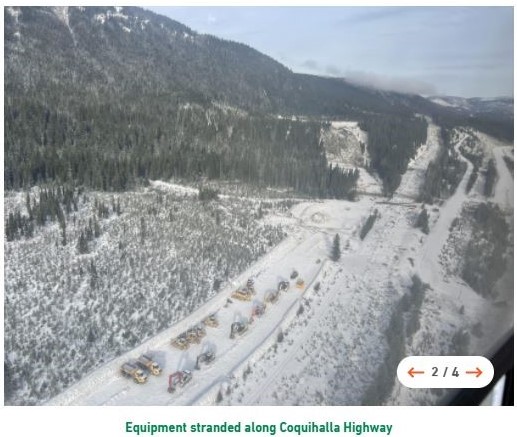 Trans Mountain stated in sworn evidence that each month of delay will result in $100 million in lost revenue and millions of dollars in incremental costs. The Parliamentary Budget Officer’s 2020 analysis found that a one-year delay would result in a $400 million reduction in net present value. Only 25 per cent of the cost overruns will be fully recovered under the pipeline’s toll structure, leaving the owners (the Canadian public) to shoulder the balance.

A recent poll from Abacus Data showed that 59 per cent of Canadians do not support spending any more money on Trans Mountain construction, based on the latest $12.6 billion budget. We are now facing a total that may double that amount.

Trans Mountain has not provided a cost update in nearly two years, since February 2020. Before the pandemic; before the International Energy Agency reported that no more fossil fuels can be developed if the world is going to reach net zero by 2050; and before the climate disasters of 2021. We need an updated cost estimate assessing the flood damage immediately before sinking more public money into TMX.

Two days after the initial floods, the Canadian Development Investment Corporation (aka CDEV), the Crown Corporation that houses Trans Mountain Corporation, released a scripted, robotic and tone-deaf video as a substitute for their Annual Public Meeting. In the video, Trans Mountain CEO Ian Anderson presented a three-minute update with monotone, listless statements: “The pipeline is full.” “Construction is progressing.” Basically, according to Anderson, ‘This is fine.’

West Coast submitted a number of questions to CDEV for the annual meeting, as we did last year. In doing so, we were dismayed to note that the Crown Corporation allowed for less than one week to submit questions for the annual meeting. In previous years, the period for submitting questions was more than one month. Combined with the out-of-touch presentation, Trans Mountain’s lack of transparency and culture of secrecy should be of grave concern to all Canadians whose tax dollars are paying for this white elephant.

On November 25, as another atmospheric river walloped BC, the Commissioner of the Environment and Sustainable Development to the Parliament of Canada, a part of the Office of the Auditor General, released a report entitled Lessons Learned from Canada’s Record on Climate Change. The report chronicles 30 years of missed opportunities for climate change action in Canada, with commissioner Jerry DeMarco stating: “Canada was once a leader in the fight against climate change. However, after a series of missed opportunities, it has become the worst performer of all G7 nations since the landmark Paris Agreement on climate change was adopted in 2015. We can’t continue to go from failure to failure; we need action and results, not just more targets and plans.”

Investing in the Trans Mountain Pipeline Expansion (TMX) is an example of policy incoherence with progress toward climate commitments.

Canadians have a right to know exactly how much more public spending will result from the delays and damage caused by this season’s devastating floods and landslides.

This current pause in construction, one of a half a dozen this year due to environmental causes, is a good time to reassess the project and demand a cost update. Now that Canada has committed to a more ambitious climate target and announced a cap on oil sands emissions, now that investors are fleeing new fossil fuel developments, now that British Columbians can call 2021 the year climate change hit home hard –  it is time to re-evaluate a pipeline project that is nowhere close to being built, and redirect billions of dollars of public money to tackling the climate crisis and paying for the havoc it is already wreaking.

If you agree that it’s time for the federal government to rethink the Trans Mountain Expansion project, you can sign on to this open letter from our friends at 350.org, calling on Prime Minister Trudeau and Cabinet to reconsider TMX.