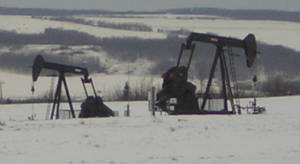 The Dene Tha’ First Nation has sought an order from the B.C. Supreme Court declaring that the provincial government breached its constitutional duty to consult with and accommodate the Dene Tha’, when the Ministry of Energy authorized the sale of twenty-one oil and gas parcels within the Dene Tha’s traditional territory in northeastern B.C. in June, 2010. The sale of the parcels has the potential to adversely affect the treaty and Aboriginal rights of the Dene Tha’, which are constitutionally protected under section 35 of the Constitution Act, 1982 and include Treaty 8 rights to hunt, fish, and trap within the Treaty territory.

Risks of water contamination and drawdowns due to shale gas production, the modification or destruction of habitat, and associated implications for wildlife populations—the Boreal population of woodland caribou, in particular, which is identified as “threatened” by the Committee on the Status of Endangered Wildlife in Canada—are among the concerns cited in the petition.

As Dene Tha’ Chief James Ahnassay indicated in a news release, dated June 22, 2011, development of the parcels jeopardizes the conditions necessary for the exercise of Treaty 8 rights, thereby triggering the duty to consult:

We are deeply concerned about the lack of adequate information necessary to understand the impacts of shale gas development to the environment and our rights, given that shale gas technologies are new to northeastern B.C., enormous volumes of water are required, serious contamination problems have arisen with shale gas development in the United States, and insufficient studies have been undertaken to identify and address impacts from shale gas technologies.

Though the purchasing companies must apply to the Oil and Gas Commission for permits in order to undertake exploration and production activities on the parcels, the petition emphasizes that, by granting exclusive rights to subsurface resources in the Cordova Basin, which is located within Dene Tha’ traditional territory, the sale essentially gives the go-ahead to shale gas development (at para. 19ff).

Shale gas development involves hydraulic fracturing, or “fracking,” which refers to the injection of large quantities of water and additive chemicals at high pressure to fracture deep shale rock formations and liberate natural gas. Research into the effects of fracking has not kept pace with the exploitation of shale gas; however, a recent study published in the Proceedings of the National Academy of Sciences in the U.S. found that fracking significantly increases concentrations of methane in well water, which carries a high risk of asphyxiation and explosion. On June 30, France became the first country to enact a ban on hydraulic fracturing. While Quebec has imposed a partial moratorium on fracking, pending further study, B.C. has not followed suit. Recently, West Coast Environmental Law was one of several groups to send a petition to the Auditor General asking Environment Canada for greater transparency regarding the potentially carcinogenic chemicals used in the process.

The government has a duty to consult with First Nations prior to effecting changes to the land that have the potential to impact treaty rights entrenched in the Constitution Act, 1982. Consultation is intended to advance the process of reconciliation and must be carried out “in good faith, and with the intention of substantially addressing the concerns of the Aboriginal peoples whose lands are at issue” (Delgamuukw v. British Columbia at para. 168). Supreme Court of Canada decisions in Haida Nation v. British Columbia (Minister of Forests) and Mikisew Cree First Nation v. Canada (Minister of Heritage) confirm that the duty to consult persists after a treaty has been signed.

The oil and gas parcels referred to in the petition are located within the Treaty 8 territory, in an area the Department of Indian Affairs proposed as a hunting reserve for the exclusive use of the Dene Tha’, in recognition of the First Nation’s historical connection to that portion of the traditional territory. While the Treaty 8 rights to hunt, fish, and trap are circumscribed by the government’s right to “take up” tracts of land from time to time, the government may exercise this right only where the duty to consult has been fulfilled. As Chief Justice Finch of the B.C. Court of Appeal asserted in West Moberly First Nations v. British Columbia (Chief Inspector of Mines),

While there may be disagreement over the limits on or the scope of the right [to hunt], consultation must begin from the premise that the First Nations are entitled to what they have been granted by the Treaty. (at para. 129)

to the extent the chambers judge considered future impacts, beyond the immediate consequences of the exploration permits, as coming within the scope of the duty to consult, he committed no error. And, to the extent that MEMPR failed to consider the impact of a full mining operation in the area of concern, it failed to provide meaningful consultation. (at para. 125)

The West Moberly case is also significant because it confirms that treaty rights, such as the right to hunt, may function to protect threatened species. Tim Thielmann, one of West Moberly First Nations’ lawyers in the suit, asks, “[c]an one hunt if there’s nothing to be hunted?” Thielmann argues that constitutional protection of the rights to hunt, trap, and fish under section 35 places “a ‘duty to conserve’ the conditions necessary for the exercise of those rights” on the government:

If the Crown has a duty to protect the continuity of harvesting rights, and if certain species are necessary or at least give meaning to these rights, the Crown’s duty to conserve would extend to those species as well. (at 13)

In an article published in the Alberta Law Review in 2010, Lynda Collins and Meghan Murtha set out a similar position:

there is a strong argument that many, if not most, of the treaties concluded with First Nations in Canada encompass a right to environmental preservation in surrendered lands sufficient to support ongoing subsistence activities, including hunting, fishing and trapping. (at 967)

The Dene Tha’ petition invokes this “duty to conserve” in the interface between treaty rights and government decision-making related to oil and gas development. Constitutional protection of the rights to hunt, trap, and fish requires government to identify resources significant to First Nations, as well as means of ensuring that First Nations are continually able to exercise rights in relation to those resources. The Dene Tha' are asking the B.C. Supreme Court to hold the government to account when oil and gas development threaten the conditions necessary for the exercise of their treaty rights.

According to Tribal Chief Liz Logan of Treaty 8 Tribal Association, there are 26,096 oil and gas well sites within Treaty 8 territory. The petition notes,

Dene Tha’s Traditional Territory is being inundated with oil and gas development and soon its members will have no ‘elsewhere’ to go to exercise their Treaty and Aboriginal rights.

West Coast Environmental Law believes the Dene Tha’s petition reveals weaknesses in B.C.’s oil and gas laws. We will be following its progress through the courts with interest.

Maia joins West Coast Environmental Law from Montreal, where she studies both civil and common law in McGill’s B.C.L./LL.B. program. She holds a Bachelor of Arts degree in English Language and Literature from the University of Alberta.