Northern Gateway’s federal approval has been overturned – now what? 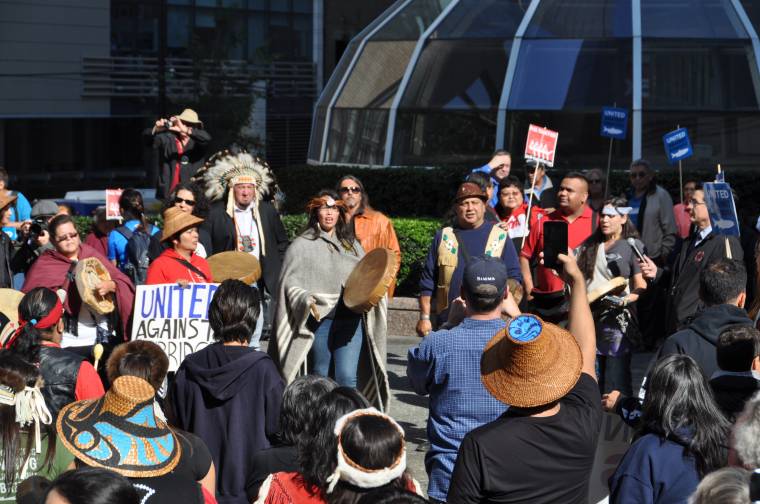 Recently we witnessed a major legal victory for First Nations opposing the Enbridge Northern Gateway pipelines and tankers proposal, as well as all the communities, groups and individuals supporting them. After nearly two years of litigation, the Federal Court of Appeal overturned the federal Cabinet’s approval of Northern Gateway on the grounds that Canada failed to discharge its duty to consult and accommodate. West Coast acted as legal counsel for two of the eight First Nations challenging the Enbridge approval in Court. Challenges were also brought by four environmental groups, as well as Canada’s largest private sector union. All the proceedings were heard together and the Court’s reasons addressed the cases of all parties.

The Court’s reasons are extensive and touch on many topics. A number of legal commentators have considered what the Court said about the administrative law arguments, as well as the constitutional arguments raised by First Nations. In this blog I consider a somewhat different question: what happens now?

The basis for overturning the Northern Gateway approval

Ultimately the Court overturned the federal approval of Northern Gateway because Canada’s execution of its legal obligations to consult First Nations “fell well short of the mark.” A couple excerpts from the Court’s majority reasons sum up its view of the key shortcomings:

[279] Based on our view of the totality of the evidence, we are satisfied that Canada failed in Phase IV [consultations] to engage, dialogue and grapple with the concerns expressed to it in good faith by all of the applicant/appellant First Nations. Missing was any indication of an intention to amend or supplement the conditions imposed by the Joint Review Panel, to correct any errors or omissions in its Report, or to provide meaningful feedback in response to the material concerns raised. Missing was a real and sustained effort to pursue meaningful two-way dialogue. Missing was someone from Canada’s side empowered to do more than take notes, someone able to respond meaningfully at some point.

[325] We have applied the Supreme Court’s authorities on the duty to consult to the uncontested evidence before us. We conclude that Canada offered only a brief, hurried and inadequate opportunity in Phase IV—a critical part of Canada’s consultation framework—to exchange and discuss information and to dialogue. The inadequacies—more than just a handful and more than mere imperfections—left entire subjects of central interest to the affected First Nations, sometimes subjects affecting their subsistence and well-being, entirely ignored. Many impacts of the Project—some identified in the Report of the Joint Review Panel, some not—were left undisclosed, undiscussed and unconsidered.

Can the decision be appealed?

So what happens now? First, there’s the question of a potential appeal. There is only one level of Court at which this decision could be appealed: the Supreme Court of Canada. However, there is no right to appeal this decision to the Supreme Court; rather, a party has to seek leave to appeal, which basically means asking the Court for permission to hear the appeal. Canada and Northern Gateway have until September 22, 2016, to apply for leave to appeal to the Supreme Court of Canada. However, there is reason to believe that Canada and Northern Gateway may not try to appeal.

For Canada’s part, the new Minister of Justice and Attorney General, Jody Wilson-Raybould, has been given an explicit mandate from the Prime Minister to “[r]eview our litigation strategy… to end appeals or positions that are not consistent with our commitments, the Charter or our values.” Prime Minister Trudeau has previously been clear that federal consultation on Northern Gateway was inadequate, for example stating to Parliament in 2014 that “the opinion of aboriginal communities were not taken into account” during the federal approval, and he has promised a Pacific North Coast oil tanker ban that would kill the project. Minister Wilson-Raybould has been equally explicit in criticizing federal consultation on Northern Gateway. For example, at the time of the 2014 federal approval, Ms. Wilson-Raybould (then the Assembly of First Nations BC Regional Chief) stated in a press release that:

“First Nations leadership in B.C. overwhelmingly oppose the Conservative government’s irresponsible decision to approve Northern Gateway and will pursue all lawful means to ensure it does not get built.  This already includes judicial reviews before the courts in respect of the Joint Review Panel’s faulty process… First Nations and the majority of British Columbians believe this project poses an unacceptable risk to the environment, the health, the safety and livelihoods of all peoples throughout this province because of the undeniable possibility of pipeline and supertanker heavy oil spills.  Also, it is unconscionable that the government would, in its approval, offload its legal responsibility to consult and accommodate with Aboriginal peoples to Enbridge.”

In this context, it seems unlikely that the current federal government would attempt an appeal to uphold the Harper government’s Aboriginal consultation process on Northern Gateway, a process which the Prime Minister and Attorney General have vehemently criticized.

(Technically, the National Energy Board could also seek leave to appeal, but this is highly unlikely since the Board was not very involved in the litigation).

For Northern Gateway’s part, it should be remembered that the company had already missed mandatory deadlines in the conditions of its original federal approval, in particular by failing to obtain any supply contracts, which had put its federal approval on a guaranteed track to expire by the end of 2016. Northern Gateway had therefore asked for a three year extension, but this extension request was subject to approval from the federal Cabinet. In other words, whether it won or lost the case, Northern Gateway needed the Trudeau Cabinet’s approval to move forward. In these circumstances, it may be preferable for Northern Gateway to accept the Court’s decision rather than continuing to fight First Nations to uphold a federal approval that was set to expire anyway.

What can the federal government do about Northern Gateway now?

As it stands, Northern Gateway’s extension request has been superseded by theCourt decision, because there is no longer a federal approval to extend. The National Energy Board recently confirmed that it is indefinitely suspending any consideration of the extension request in light of the Court's decision. Consequently, Prime Minister Trudeau’s Cabinet will need to make the “red light or green light” decision of whether to reject or approve the Northern Gateway proposal. The Court gave Cabinet a few options in this regard.

However, if Cabinet intends to do anything other than reject the project, the Court orders that Canada must launch a new consultation process “with a view to fulfilling the duty to consult with Aboriginal peoples in accordance with these reasons.” Such consultations would need to be significantly more expansive than simply receiving submissions “on the current record” and could, for example, entail requirements to consider new evidence and issues that were not addressed at the time of the Harper Cabinet’s 2014 approval. Upon completion of meaningful consultations, the matter would be placed before the Trudeau Cabinet and then, within three months, the Trudeau Cabinet would be required to exercise one of three options: (i) reject Northern Gateway; (ii) approve Northern Gateway with the current National Energy Board conditions as well as any additional conditions attached by Cabinet to meet the duty to consult and accommodate Aboriginal peoples; or (iii) send the matter back to the National Energy Board to reconsider its recommendations.

It bears repeating that the Court has given the Trudeau Cabinet an “early exit” to reject Northern Gateway based on submissions on the current record. However, if Cabinet does anything other than take this early exit, then the Court requires fulsome consultation with First Nations, including probable consideration of new evidence and issues.

Given the strong, prolonged First Nations opposition to Northern Gateway, including the eight First Nations in Court and the many others that have supported the Save the Fraser Declaration and Coastal First Nations Declaration, the Trudeau Cabinet ought to consider this early exit as an opportunity to finally put an end to Northern Gateway and fulfill its promise to ban oil tankers on BC’s north coast. There are certainly many people across British Columbia and Canada ready to join in celebrating the day that the risk of Northern Gateway’s oil pipeline and tankers is gone for good.