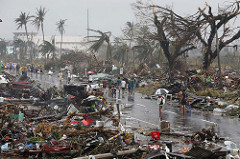 In 2013 Typhoon Haiyan smashed into the Philippines, killing at least 6,300 people, and displacing an estimated 4 million people.  Viewed as a natural disaster, it was tragic. But given what we know about the impact of climate change on the intensity of tropical storms, should it be viewed purely as a natural disaster? Or should some human responsibility be assigned?

On September 22nd, individuals and organizations in the Philippines filed a human rights petition (the “Petition”) alleging that 50 corporations, including 6 Canadian companies, are violating the human rights of the people of the Philippines – through their contribution to climate change.  This Petition, the first of its kind, confirms what we’ve been saying for more than a year: the domestic laws of individual countries suffering damages due to climate change will increasingly be used to hold international fossil fuel polluters accountable.

Fossil fuel companies make billions of dollars drilling, refining, marketing and selling products that they know will disrupt the global atmosphere and create the conditions for super-storms like Haiyan (as well as a myriad of other impacts on human lives and communities). Exxon, for one, has known this since at least the early 1980s. Communities around the world are paying the price – in lives lost, ecosystem benefits lost, and in billions of dollars to prepare for and rebuild from climate impacts – while the fossil fuel companies continue to pocket their profits.

That’s not fair, but there have been surprisingly few calling on fossil fuel companies to take responsibility for the suffering that they are causing.

This week’s Human Rights Petition, filed with the Commission on Human Rights of the Philippines, broke that silence, naming 43 fossil fuel companies (and 7 cement companies) as responsible for human rights violations – including 6 Canadian companies: Encana, Suncor, Canadian Natural Resources, Talisman, Husky Energy and Nexen, as well as others that are involved in Canada’s oil and gas sector, i.e. Chevron, ExxonMobil, Shell, etc.

The Carbon Majors should be held accountable for violations or threats of violations of Filipinos’ rights (a) to life; (b) to the highest attainable standard of physical and mental health; (c) to food; (d) to water; (e) to sanitation; (f) to adequate housing; and (g) to self determination resulting from the adverse impacts of climate change.  … One potential way to determine the level of responsibility of an individual Carbon Major is by identifying the company’s share in the estimated global industrial emissions of carbon, and when it is supposed to have allegedly acquired knowledge of its product’s harmful effects, including the impacts on the climate, ecological balance, and people’s health, or was informed of those impacts.

That fossil fuel pollution is the primary cause of climate change, and that climate change is already resulting in human rights violations including death, displacement and loss of livelihood is clear. It’s important to recognize that right now these companies are making billions of dollars in profits, knowing that their product will worsen the impacts of tropical storms and cause other climate impacts, but until now no one has demanded they take any responsibility for that harm.

The Petition isn’t even asking these companies to help rebuild the Philippines after super-storms, or to help it prepare for such storms.  Rather, the Petition asks the Commission on Human Rights to request that the 50 Carbon Majors submit:

… plans on how such violations [of human rights] or threats of violation resulting from the impacts of climate change will be eliminated and remedied and prevented in the future.

The effort to call on particular corporations to acknowledge and address their role in those human rights violations is a new, and welcome, development. It’s one we believe we should all support, and we invite you to send a message to the 50 companies named in the Human Rights Petition, calling on them to voluntarily acknowledge their role in climate change and prepare the types of plans that the Petition is calling for.

This is not a one-off.  We believe that the Petition may be an early example of a coming trend of using country-level laws to hold international fossil fuel polluters accountable. With increasing climate damages, and increasing frustration with the slow pace at the international level, more and more climate-impacted communities may turn to their own laws for a remedy.

We noted that the laws and legal strategies in play in each country would be different.

The Petition, like our report, argues that the fact that harm is occurring in the Philippines – in this case human rights violations – gives the Commission on Human Rights the authority to investigate the causes of the violations.

There is … ample justification for any State to act on transboundary matters like climate change, where harmful activity is taking place in one country, and the negative impacts are being suffered in another. According to the 2011 OHCHR report on human rights and the environment, “[o]ne country’s pollution can become another country’s environmental and human rights problem, particularly where the polluting media, like air and water, are capable of easily crossing boundaries.” These issues are of particular importance in the environmental context, in the light of the number and intensity of transboundary and global environmental threats to the full enjoyment of human rights.

National governments have failed even to cut subsidies to their fossil fuel companies, let alone truly hold them accountable for climate damages. International negotiations have also failed to reign in fossil fuel pollution.

We believe that legal action at the local level, where communities are paying to prepare for and recover from climate impacts, can establish that domestic laws have the power to hold fossil fuel companies accountable for the damages that fossil fuel pollution is causing in individual countries. Actions like the Philippines Human Rights Petition are the one of the first of what we hope will be a series of legal actions that have the potential to expose the hypocrisy of an industry that believes that it can cause hundreds of billions of dollars of damage each year, and yet avoid paying anything.

The organizations and individuals that have filed the Petition have a modest and reasonable expectation of the 50 Carbon Major Companies – that those companies prepare a plan on how the human rights violations, and threats of human rights violations, arising from the use of their product will be “eliminated and remedied and prevented in the future.” If you agree that fossil fuel companies need to recognize their role in violating human rights, and prepare a plan to address those violations, then we invite you to tell them so.

* - As these things are usually calculated. If you were to include the emissions from fossil fuels that Canada had some level of control over (extracted, transported, exported, as well as used), the number would be higher, although still below that of these 50 companies.