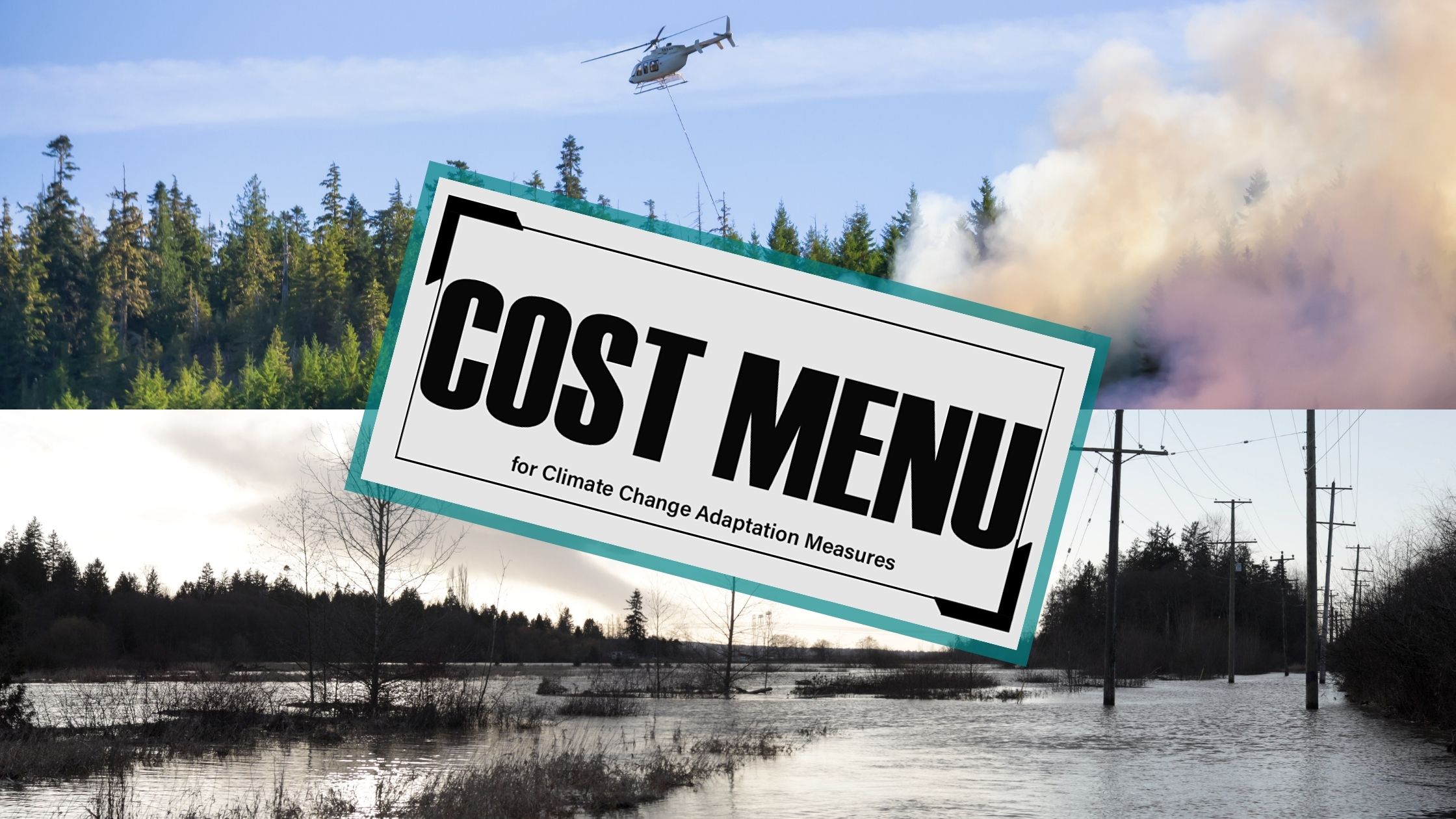 “Could we have the bill, please?”

When you go to a restaurant, a menu helps you select what to eat and how much you might pay for it. The Cost Menu for Climate Change Adaptation Measures (Part I), released today, helps communities figure out how to keep themselves safe from two expected impacts of climate change – wildfires and extreme precipitation – and what it might cost them.

With climate change expected to cost BC communities billions of dollars a year, it’s important that we start investing in climate adaptation to keep us safe. In a recent randomized Google survey, we learned that 55% of British Columbians think it is very important for our communities to do more to prepare for future climate-related disasters, and a further 18% view it as somewhat important. Only 5% say that it is not important.

Preparing for climate change makes good sense – it has been estimated that for each dollar spent preparing for disasters, society saves about six dollars that would otherwise go towards disaster recovery. And yet too many communities have not really figured out what climate change will mean for them – and what they need to be investing now to prepare for it.

The Climate Cost Menu was researched and written for West Coast Environmental Law by three hard-working students at UBC’s School of Community and Regional Planning (SCARP), Charles Pan, Pulkit Kathuria and Xuerou Wang, under supervision by ourselves, UBC’s Clare Mochrie and Robin Hawker, with the engineering firm Kerr Wood Leidal (KWL). Many thanks to all of them, as well as to the practitioners and local government staff who were interviewed in preparing the Menu.

Important lessons that didn’t make it into the Menu

The Menu is easy to read, laid out in “infographic” form for each type of climate adaptation that a community might consider. In future years we hope to expand it to include more types of climate risks. We encourage you to check out the students’ excellent work.

The Menu focuses on specific questions related to choosing climate adaptation measures and understanding their costs. However, in the course of their research, the students gained a lot of different insights as they interviewed professionals and civil servants who were implementing real world climate adaptation solutions. In many cases these lessons are implicit in the Menu, but may not be emphasized. We asked each student to share the top lesson(s) they learned.

Government funding is setting the agenda

A fundamental question that West Coast Environmental Law asks is who will pay for the costs of preparing for and dealing with climate change. The students heard that funding sources were of particular concern for local governments, which have limited powers of taxation, and are often dependent on funding from other levels of government. For each of the climate adaptation measures found in the Menu, the students included “Funding Sources,” which listed grants and other sources of funds available for that particular adaptation measure.

Not surprisingly, adaptation measures for which funding is more readily available are more likely to be picked up by local governments. Charles Pan writes:

One thing I've noticed through our conversations with municipalities is that adaptation activity seems to be shaped by senior government funding: the amount of funding influences how much adaptation can be done, conditions on the funding constrain what can be done, needing to apply for funding incurs application costs, and uncertainty on how long funding will be available for makes it harder to plan for the long term. It seems like some kind of formula that automatically grants adaptation funding for municipalities based on things like population or economic activity, or giving municipalities more tools to levy revenues themselves instead of circling funds from municipalities to the province and back to municipalities, could make adaptation planning easier for municipalities.

Charles also worries that municipal adaptation decisions may not really reflect the likelihood and severity of possible climate disasters, so much as what senior government has chosen to fund. He asks:

Given that each community probably understands the hazards it faces best, perhaps senior government funding can be given for climate change adaptation in general instead of for specific hazards.

Robin Hawker, a planner from KWL who helped oversee the student work, echoes that, “There is no one-size-fits all, and adaptation measures will need to be carefully tailored to each local context, which will have an impact on approaches, costs and benefits.” To the extent that government funding programs don’t recognize that reality, they will undermine our ability to prepare for climate change.

Emma Wang writes that the students found it difficult to get information from local governments on the ongoing implementation costs associated with each adaptation measure. While the local governments had some idea of the “up front” costs that they spent to create the adaptation measure, the ongoing costs were often simply rolled into the regular duties of municipal staff and/or risked falling between the cracks:

Most communities lack information on the “staff time” costs, and … still need to monitor the implementation process to calculate the “ongoing costs”. … Ongoing costs are the most important expenditure for communities that want to maintain their adaptation and it is hard to get funding for this from senior levels of government. The federal and provincial governments could develop better adaptation funding programs if communities had data not only about start-up costs but also about ongoing costs and local conditions influencing cost.

The Cost Menu can help communities start thinking in terms of the full range of climate costs. As Robin Hawker of KWL writes:

[O]rder-of-magnitude costs can help communities start thinking about preparing the funding needed to address their climate hazards. Perhaps the menu is less about choosing between options, and more about just understanding what the scope of costs may look like to start the conversation and staff, political, and community-wide scales.

With climate adaptation often driven by funding sources, local governments may not always be able to plug “grassroots” input directly into climate adaption measures. And yet, Pulkit Kathuria emphasizes the “importance and role of public participation in successfully adopting and implementing wildfire adaptation measures.”

Pulkit points out that in many cases climate adaptation, especially in relation to wildfire risk management, requires that both private and public land be managed, affecting the broader community.

Be it private or public land, the community members are affected directly and indirectly, giving rise to a need for community awareness and consultation. Comprehensive public outreach is required to invite and consider suggestions from a variety of stakeholders. Our various interviews demonstrated that effective communication between the municipality and the public is key towards successful adopting and implementing adaptation measures.

Need for cooperation between local governments

Some of BC’s local governments have made progress in preparing for climate change, and it is important that other local governments are able to learn from their experiences. While in some cases there are local governments following in the footsteps of these leaders, Pulkit warns that too often there is “a lack of communication between municipalities, and important information is not transmitted, leading to greater time and resources spent on planning and implementing new adaptation measures.”

There is an opportunity for other municipalities across BC to learn from each other’s experiences. This includes the process followed in planning, resources required, budget and other requirements. Background studies and other preliminary studies conducted can also be a useful starting point for municipalities.

The Menu itself is intended to be one tool in sharing information and best practices between local governments. Robin Hawker of KWL writes:

There are communities in BC that are showing leadership by adopting innovative and new approaches (e.g. green infrastructure, FireSmart development policies) to manage climate risk. The menu provides a pathway for sharing out on some of this leadership and could encourage communities just starting out to identify and connect with other communities whose experience they can learn from.

However, clearly more needs to be done. West Coast Environmental Law has pointed out in the past that some of these challenges could be addressed by requiring regional climate adaptation planning, where several nearby local governments can share information and resources to prepare their region from climate impacts. After all, climate impacts do not end at municipal borders.

Climate adaptation can be about delivering services, better

Robin points out that there can be a grey area between local governments seeking to deliver services that they have always delivered and climate adaptation. Communities have always needed stormwater management, and have always needed to reduce wildfire risk. Climate change just makes those needs more urgent, and requires attention, resources and in some cases new thinking, such as nature-based approaches, to maintain levels of service acceptable to communities.

Many of the methods will be similar/the same (e.g. stormwater management) but with greater capacity to accommodate more frequent and severe climate impacts. Many climate resilience measures that may appear on a menu include measures communities are already taking to address hazards, such as flooding and wildfire, under current conditions.

What’s next for the Climate Cost Menu

We are grateful to Pulkit, Emma and Charles for their excellent work on the first phase of the Climate Change Adaptation Cost Menu, and for this opportunity to collaborate with SCARP. Future phases may look at rising sea levels, drought, riverine flooding and other climate risks and impacts.

The SCARP mentor for this project, Clare Mochrie, is pleased at how the menu turned out, noting that “the project hits on several of the key challenges that planners are grappling with in the face of climate change – and there is a strong potential for this work to have an impact.”

Clare was equally interested to see this project go ahead:

While their work focused on just two climate change risks – wildfires and stormwater flooding – we hope that future cohorts of students will build on this foundation and expand the menu to encompass other types of risks and adaptations. We have found multi-year projects to be an excellent fit for the Studio as they allow us to take projects to an extra level. Partnerships are strengthened over time, and that also contributes to a more enriching and productive experience for both our students and our partners.

West Coast Environmental Law looks forward to working with Clare, SCARP, KWL and a new group of students starting in September to build upon the Menu’s first phase.

Let us know what you think in the comments below. How would you like to see the Menu used? What climate risks should we look at next? What did you like about the Menu and is there anything you would change?