United we beat Enbridge: Celebrating the defeat of Northern Gateway with the people of Haida Gwaii | West Coast Environmental Law

News & Events » Environmental Law Alert Blog » United we beat Enbridge: Celebrating the defeat of Northern Gateway with the people of Haida Gwaii
Back to top

United we beat Enbridge: Celebrating the defeat of Northern Gateway with the people of Haida Gwaii 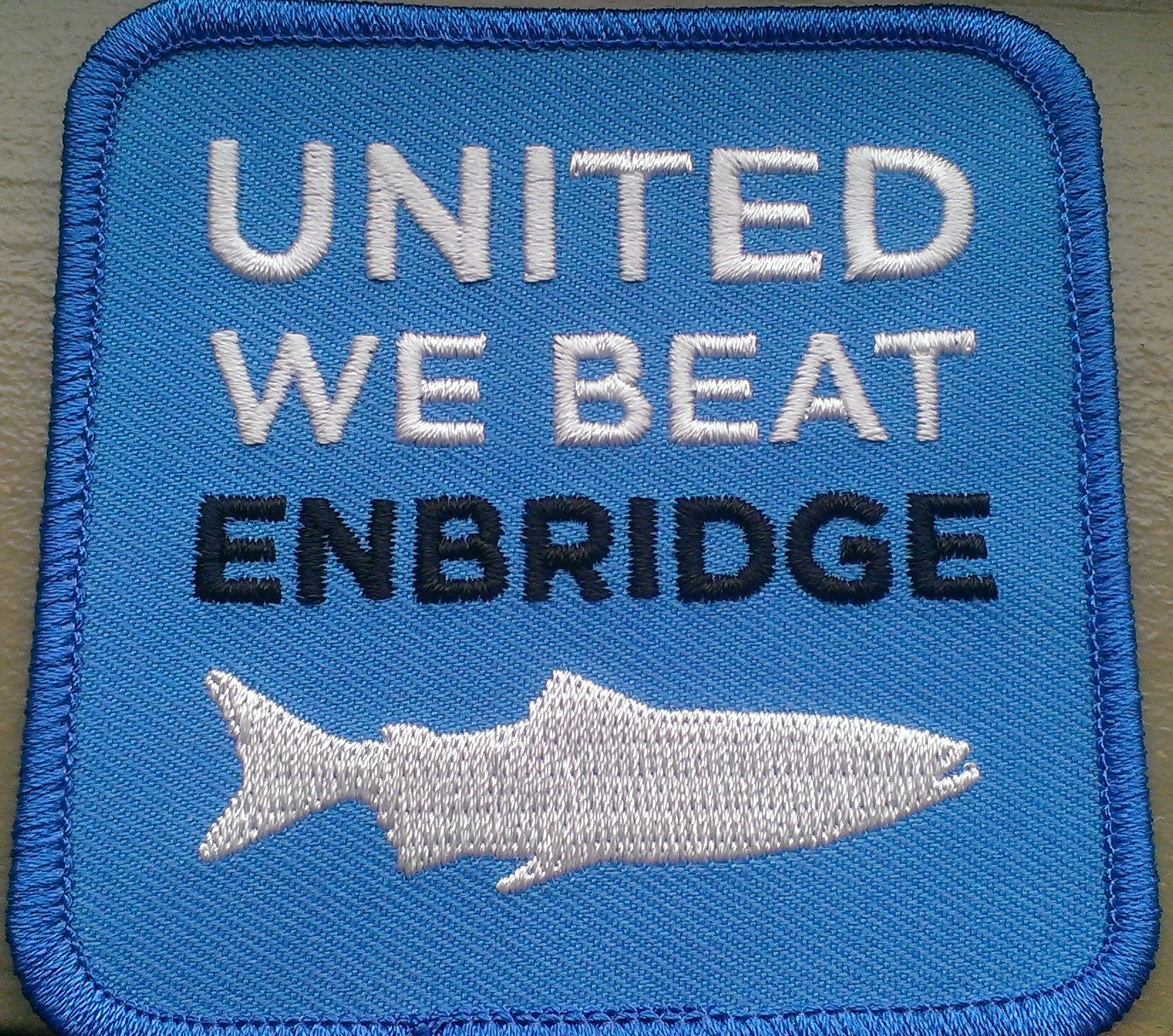 Back in December we blogged that it was worth taking a moment to celebrate and reflect on the final rejection of the long-beleaguered Enbridge Northern Gateway project, even though it was announced simultaneously with the federal approval of Kinder Morgan’s Trans Mountain proposal (and Enbridge’s Line 3 pipeline). As it turns out, the people of Haida Gwaii didn’t just take a moment to celebrate Northern Gateway’s demise – they took an entire day.

West Coast Environmental Law was happy to accept an invitation to attend a celebration in Gaaw (Old Massett) on March 25, co-hosted by Haida Gwaii CoAST and the Council of the Haida Nation, to mark the defeat of Northern Gateway. In fact, West Coast was represented at the celebration by not one, but two lawyers. Staff counsel Eugene Kung had the good fortune (or clairvoyance) to have already booked a vacation to Haida Gwaii that coincided with the date of the celebration. Staff counsel Gavin Smith, who unlike Eugene had not predicted the future, made the trip to Haida Gwaii especially to attend the event.

Gavin took advantage of his first trip to Haida Gwaii by arriving early to explore Naikoon Park* on a multi-day hike, while Eugene helped out the event’s grassroots community organizing committee by attempting to faithfully reproduce some of the anti-Enbridge signs that Haida Gwaiians had displayed around the island.

It really was a community celebration, with dozens of other volunteers helping with setting up, cooking (the dessert buffet was done potluck style), and decorating. On one wall, a timeline of events noted major milestones in the campaign to stop the project. Another wall was covered with images of the Northern Gateway Joint Review Panel presenters from Haida Gwaii and a summary of their testimony. 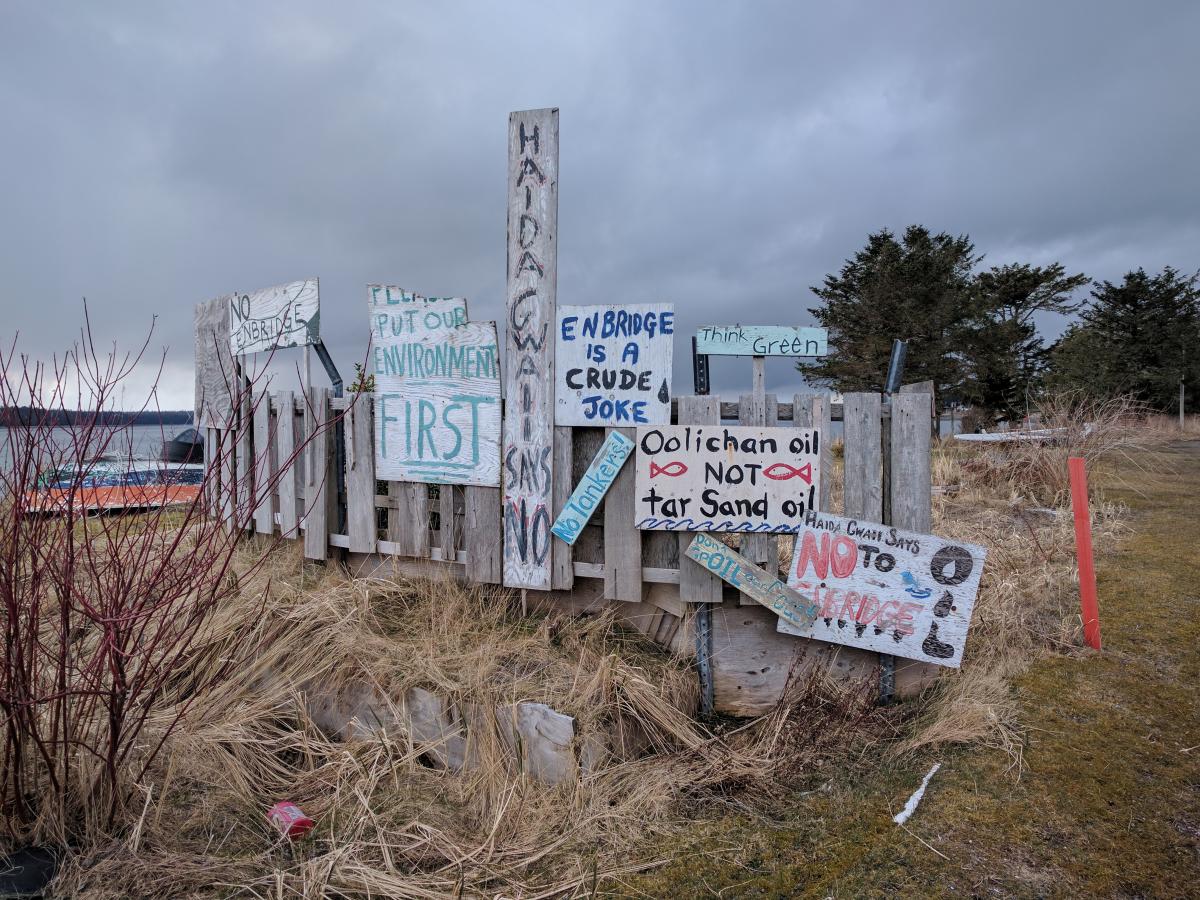 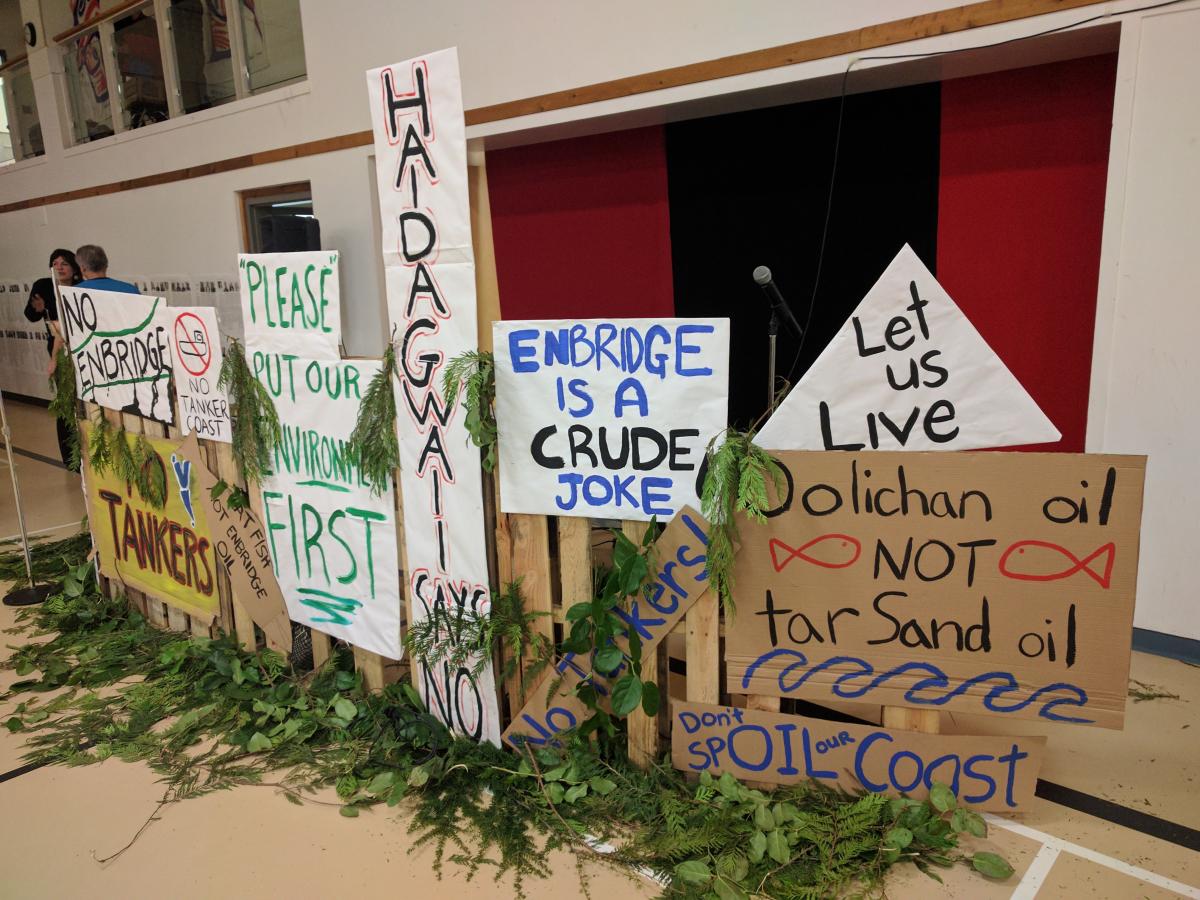 The celebration was very well attended by about 500 people and there was a live broadcast available across the island. Many Haida and non-Haida people spoke of their experiences standing before the Northern Gateway Joint Review Panel to oppose the project, or organizing against Enbridge in their community. Two Haida rappers, including Ja$e El Nino (Gaagwiis Jason Alsop) shared a few tracks, including a verse from this incredible collaboration with Kinnie Starr.

The Haida Nation’s legal team also travelled to the celebration and received a standing ovation from the crowd for their work (maybe the first standing ovation that lawyers have ever received). Everyone in the hall was treated to a feast of seafood chowder and venison stew that featured the amazing food of Haida Gwaii, and the night concluded with a powerful series of Haida dances and songs. 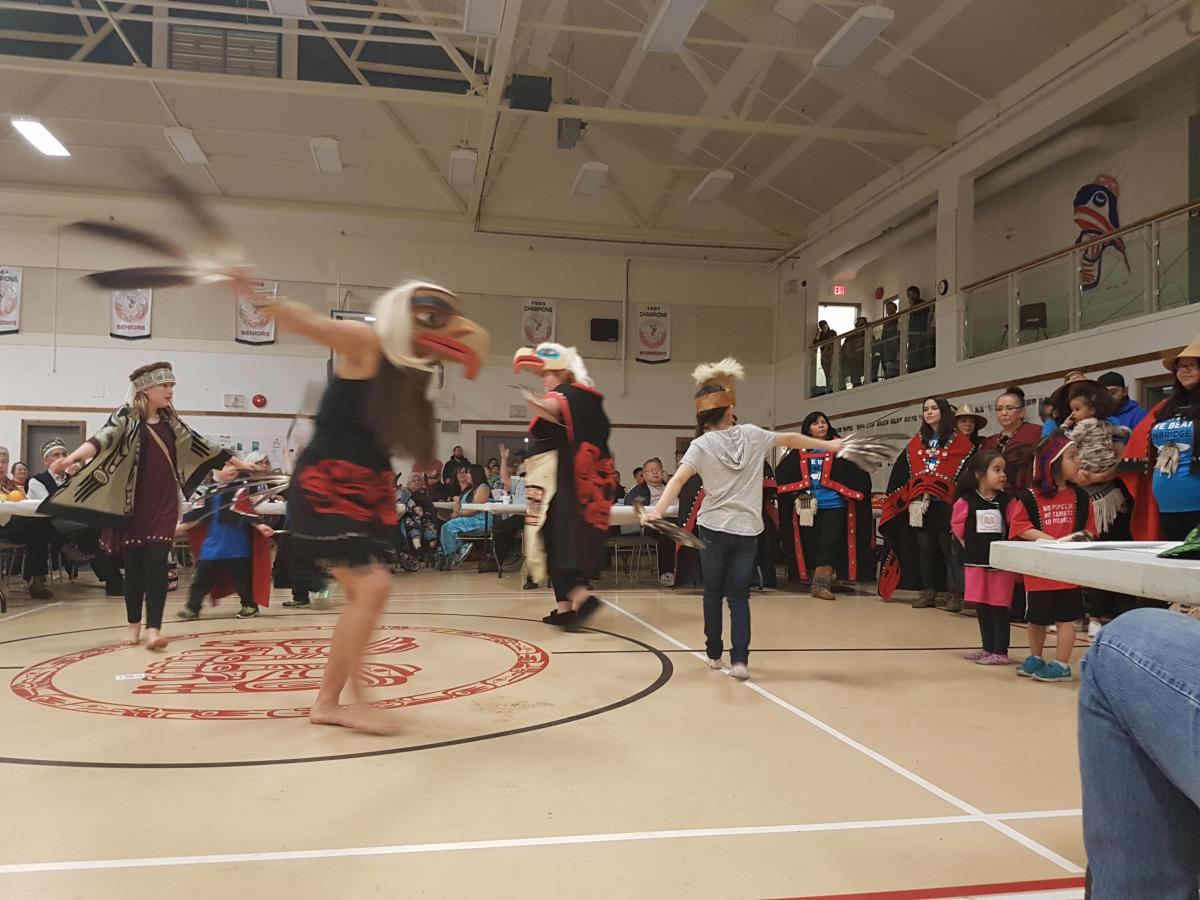 While the event was a celebration, it also acknowledged that the work is far from over with a series of speakers who discussed continuing efforts to protect the land and water from risks posed by other industrial development.

Kirby Muldoe spoke about the fight against the proposed Petronas Pacific NorthWest liquefied natural gas (LNG) plant on Lelu Island. Julian Napoleon, a young leader from Saulteau First Nations, spoke about fracking and the Site C dam. A young Haida mother named Erica Ryan-Gagne told the powerful story about her journey to Standing Rock with her family, supported by her community and the Council of the Haida Nation. Eugene spoke about the connection between Northern Gateway and Kinder Morgan as well as the Energy East, Dakota Access and Keystone XL pipelines, and how he celebrates this era of Indigenous-led movements grounded in justice. 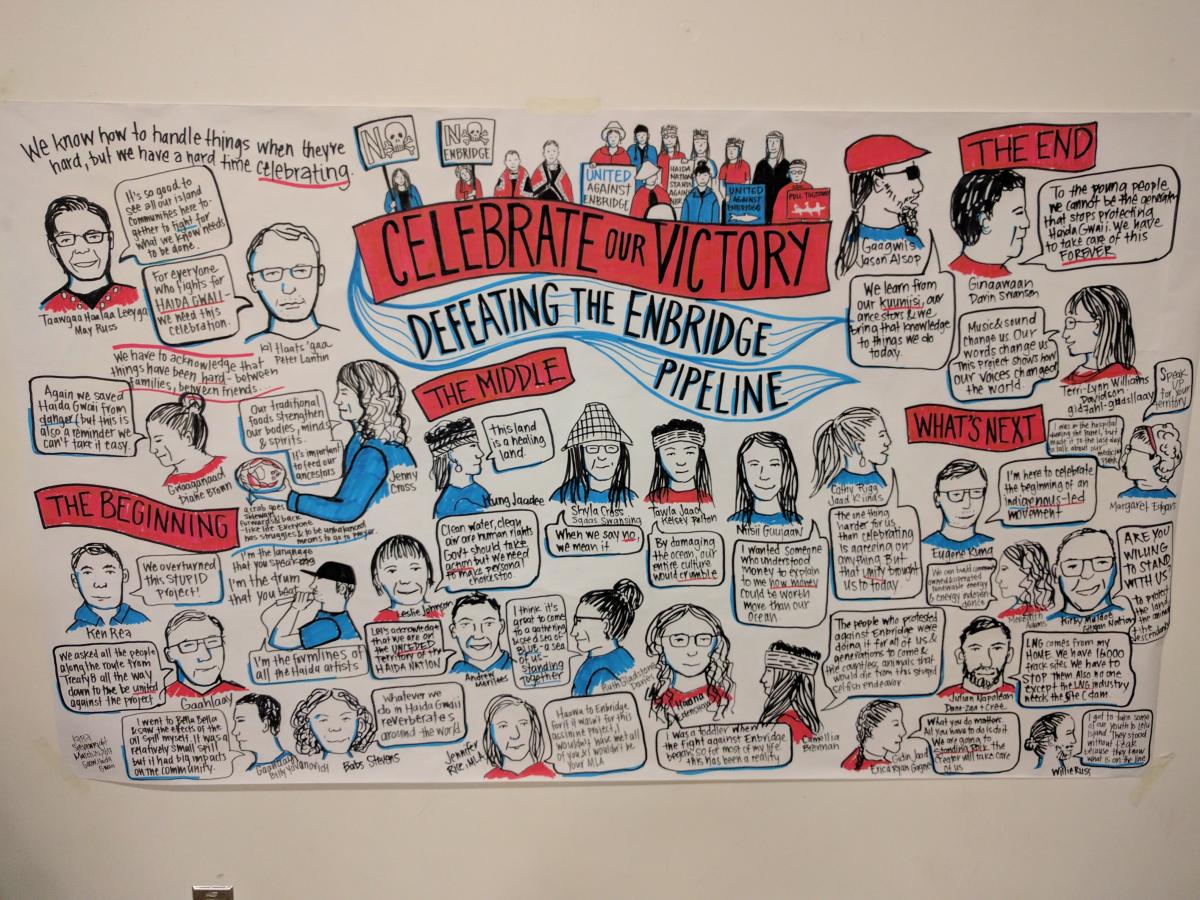 The point was made a number of times during the night that, even though it may be easier to come together to oppose a common threat, it is essential that we also stand together to celebrate. That night, it was obvious why.

Even as speakers acknowledged all the other social and environmental challenges we have to confront, you couldn’t help feeling hopeful. Such is the power of a community celebrating its strength. To repeat the phrase emblazoned on the t-shirts of many of the people in the hall that night: “United We Beat Enbridge.” 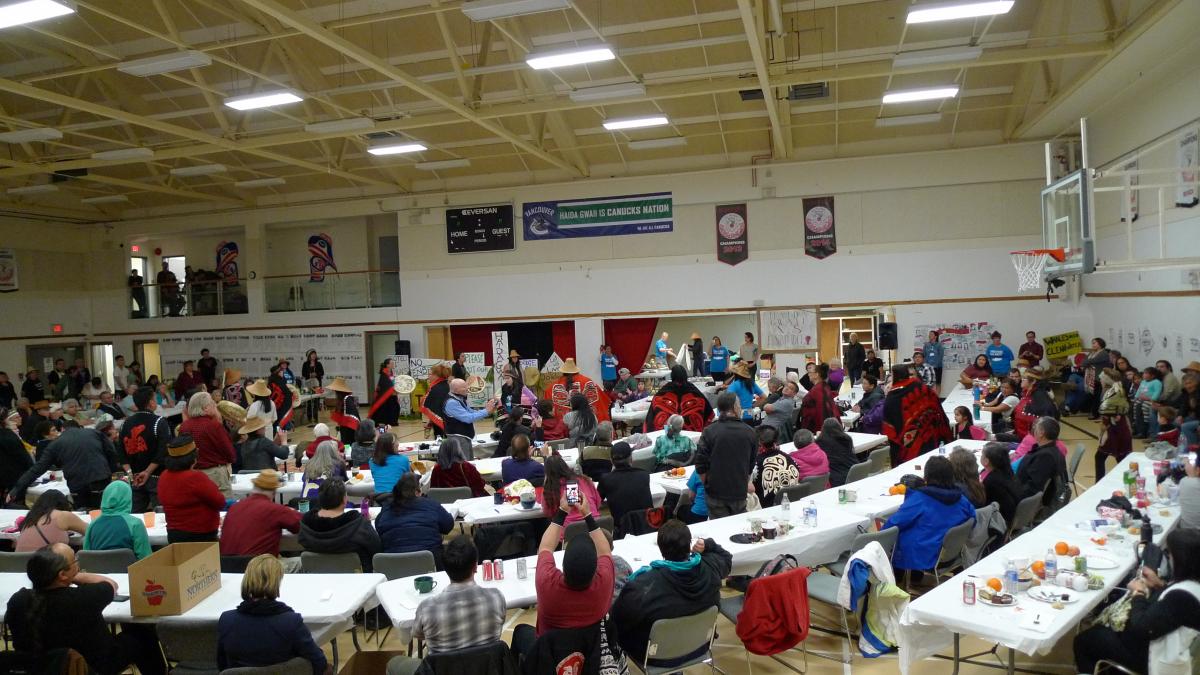 *“Naikoon” is an Anglicization of “Nai-Kun”, the Haida name for Rose Spit and the location of a Haida origin story.