What we’re reading: Q&A with William Deverell, author of Stung 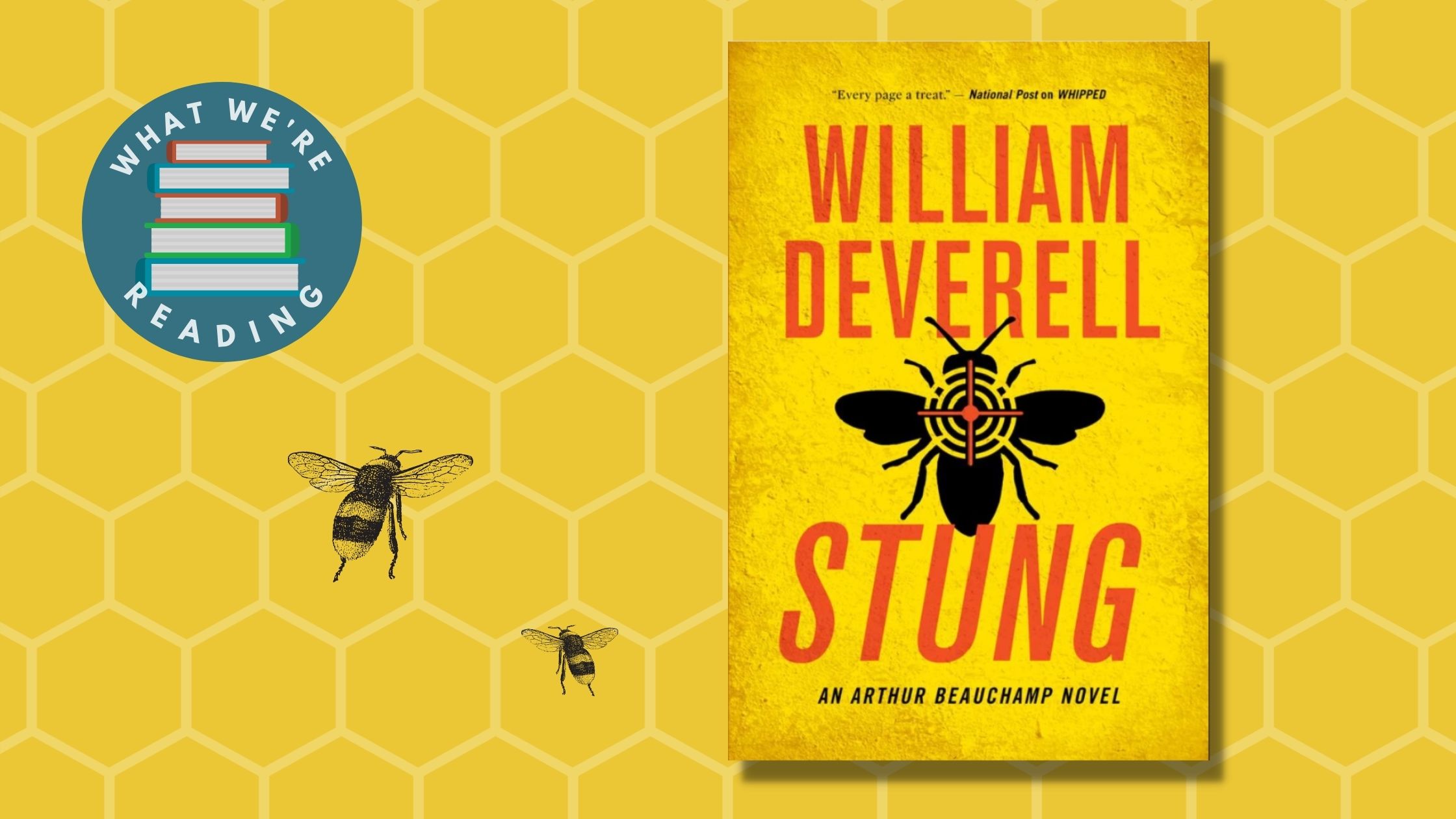 This month, we spoke with BC-based novelist William Deverell about his new book, Stung – the latest political-legal thriller in his popular series following lawyer Arthur Beauchamp. Stung is centered around Arthur’s defence of a group of environmental activists, who are accused of sabotaging an industrial pesticide plant in an effort to save the precious pollinators that its products put at risk.

Deverell, a former journalist and lawyer, lives on Pender Island, BC (in a place not too different from the fictional island home of his protagonist). In a phone interview with West Coast Communications Director Alexis Stoymenoff, he shared some of his reflections about the real-life legal and environmental issues at the heart of the story.

The legal drama in Stung surrounds a group of environmentalists working to save the bees from toxic chemicals and pesticides. What was it that sparked your interest in bees and pollinators, and the threats they face?

Well, a lot of my novels have environmental themes, and I’ve always been an activist in terms of protecting what’s left of this poor benighted planet. Really the inspiration for choosing the holocaust of bees came from my wife, Jan Kirkby, who is a biologist and an environmentalist. She told me, “You know, you’ve really got to write a book that makes a statement about the world.” We discussed topics, and I just love bees, so I thought, “Okay, let’s dig into it.” And I started doing some research. The more deeply I got into the research, the more depressed I got.

Even just recently, since I’ve written the book, I see articles – for instance, in The Guardian – a lot. There’s one headline saying that bees are now considered the most important living thing on Earth – and for good reason, because they’re the main pollinator for about 70% of the world’s crops, and yet they’re under threat. They’re a vanishing family of insects right now. Apparently, the total impact of pesticides and other pollinators doubled in a decade.

So anyway, for my focus, I decided on neonicotinoids – a pesticide that is particularly dangerous these days, and too widely used. I read that some of these “neonics” are 10,000 times more toxic than DDT, if you can imagine that.

[In a novel], you have to entertain people. There’s no use just hammering people over the head, or lecturing them. My books, I hope, are entertaining. There’s a mix of humour, and actually in this one, a bit of sex, drugs and rock n’ roll. But my readers expect that. And I usually have a little side story going on in my not-so-mythical Gulf Island called Garibaldi.

I have a cast of funny characters who pop up from time to time, and people seem to love that. As well as the issue involving neonics, I have an issue involving a SLAPP suit against my long-time protagonist Arthur Beauchamp and a few of his friends who are fighting to preserve a park on the island.

So there’s lots of political and environmental action in this, but the main storyline of course is about an environmental activist group who have decided to stir up trouble by invading a plant that pumps out neonics in Ontario – a company they believe to be corrupt, that is absolutely poisoning the insect population of the world. It’s an act of direct action that they’ve undertaken and they risk prosecution, and they are in fact prosecuted for breaking and entering and stealing various records from the plant. These records prove that the company is in fact running afoul of the law, very much as Monsanto has been exposed of having done over the years, before it was taken over by Bayer.

The main thrust of the book is how they fight this case, on the basis of the defence of necessity. They finally drag poor Arthur Beauchamp – who is desperately trying to retire from the practice of law – out to Ontario to defend this case, which involves about seven defendants and is being massively covered by the media worldwide.

There is a fair bit of tension, a lot of twists and unexpected events happening on the way. But at the same time, I hope I’ve created a teaching moment about the danger to pollinators.

What was the most interesting thing you learned while you were researching this topic and writing the book? Was there anything that surprised you?

I had no idea that the danger to pollinators was so severe. It doesn’t get much coverage in the media. I thank The Guardian, which I subscribe to, for taking up the cudgels on this issue. When I read that neonics are not only soluble, but that they spread into our streams, into our wells, into all sorts of living plants that are not just grown on farms – and they have even affected human beings. Certainly there have been tests on animals showing that there are distinctive amounts of neonics found in their bloodstreams. And it’s been found even in baby food! So this is a crisis.

In Europe – as a result of a massive use of neonicotinoids in Germany, which caused thousands of apiarists to lose their beehives – they banned neonics, apparently widely. We’re waiting for the rest of the world to follow up. Canada has had some restrictions, but they are not doing a ban.

[NOTE: You can take action to ban harmful neonicotinoids by signing a petition by our friends at the David Suzuki Foundation here.]

As you said, the fight to protect pollinators is not the only environmental battle that appears in the novel. Your lead character, Arthur, is also embroiled in a local campaign to protect a park on Garibaldi Island, which is at risk from a quarry development. West Coast Environmental Law gets a little cameo in this part of the story, as a source of legal support for the community group challenging the quarry approval in court.

Well yes, you do. I’m an annual contributor to West Coast Environmental Law, and I just thought, well why not give you guys a plug.

So what was your inspiration for this local BC storyline?

Actually, I think we had some support from West Coast for an issue we had on this island some time ago about a road being driven through a park here. We called upon you guys, and some intensive research was done. (We didn’t have the same kind of protest that I described in my book, in which poor Arthur Beauchamp and a bunch of his fellow islanders got busted for blocking the ferry.)

Unfortunately, we didn’t win the day on that one, but that was what inspired me to say, “Ok, well why not give WCEL a little bit of a boost in my novel, because they helped out on our island.”

I think it’s very important. Between you and Ecojustice, I think, the more the merrier. I know you need the funding – probably you need a lot more funding to fight the legal battles that are so, so important. These are the most important battles of any kind that are being fought in our courts these days – the ecological battles, the battles to save our environment from the effects of global heating. It’s critical that organizations like yours have the public support and the funding to take these kinds of issues to court, because, you know, you’re going to be fighting against extremely well-funded corporations. That makes it all the more important for organizations like WCEL to be on the front lines fighting for our environment.

As you mentioned, political and environmental themes are a common thread in some of your other novels as well – not just Stung – and through adventures of Arthur Beauchamp. What is it about the interaction of law, politics and the environment that makes for a good story?

Well, let’s see – April Fool was another one which was strongly environmental, and it was involving a clearcut on my Garibaldi Island, and a protest, and people blockading and sitting up in trees and what not. And some of the same characters who appear in that also appear in Stung.

You know, I think it’s important to make people alive to the concerns that we all share about the environment by throwing a bit of a message into books and into novels (as long as you’re not boring people with too much science).

I hope I’m making converts to the cause. But let’s hope it’s not too late, because it’s scary what’s happening to this planet.

You can join William Deverell for a virtual launch of Stung on Earth Day, April 22, 2021 at 5pm PT. The online cocktail-hour event will feature a reading and Q&A, plus a musical interlude by guitar virtuoso Lester Quitzau. See event details here.

Stung is available for purchase online and in store – check out your local independent book seller for more information.

Here's what our Executive Director & Senior Counsel Jessica Clogg had to say about the book:

“In the face of one of the existential environmental challenges of our day, Deverell’s larger than life eco-activists and their lawyers fly into battle. Their tactics may be fictional, but the environmental harm is real. Get ready for a wild ride and hope that Beauchamp wins the day, for the bees and for all of us.”

To learn more about William Deverell and his work, visit https://www.deverell.com/