Resources » Publications » From the Ground Up: Celebrating 30 Years of the Environmental Dispute Resolution Fund
Back to top

From the Ground Up: Celebrating 30 Years of the Environmental Dispute Resolution Fund

From the Ground Up: Celebrating 30 Years of the EDRF (PDF) 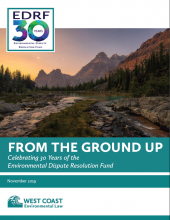 Since 1989, the Environmental Dispute Resolution Fund (EDRF) has supported community efforts to defend the health of the environment and build a more sustainable British Columbia. In honour of the Fund's 30th anniversary, we produced this report to highlight some of our most exciting work.

This report offers a glimpse into the incredible impact of the EDRF – past, present, and future. It has been difficult to select only a few of the many stories we would have liked to share, but these stories bear evidence to the value the fund has provided for British Columbians during its 30-year history.

The EDRF is made possible by the generous financial support of the Law Foundation of British Columbia.