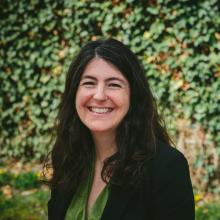 Jessica Clogg (she/her/hers) is West Coast’s Executive Director and Senior Counsel, and heads up our work on Aboriginal and Natural Resource law. She first joined West Coast in 1995 as a student, and also served as a board member before becoming staff counsel in 1999.

Jessica has said that she does the work she does “because she loves the land, and because she believes in justice.” For more than a decade, her work has had a particular focus on providing legal and strategic support to First Nations – working with First Nations leaders and community members to use their own laws as a foundation for powerful strategies to protect the lands and resources of their territories and to catalyze broader shifts in Canadian law. Through the strategic application of constitutional law and Indigenous legal traditions, Jessica ultimately seeks to transform mainstream laws about the land (who controls it and the rights and responsibilities they have) in ways that are more democratic, more sustainable and more just.

Jessica holds a joint Masters in Environmental Studies and law degree (MES/LL.B) from York University, where her graduate research focused on “Tenure Reform for Ecologically and Socially Responsible Forest Use in British Columbia.” Before joining West Coast Environmental Law, Jessica worked as a facilitator, popular educator and organizer for a variety of non-profits, at a Vancouver litigation firm, and as a law clerk to the British Columbia Supreme Court.