Are we protecting our Water? | West Coast Environmental Law

News & Events » Environmental Law Alert Blog » Are we protecting our Water?
Back to top

Are we protecting our Water? 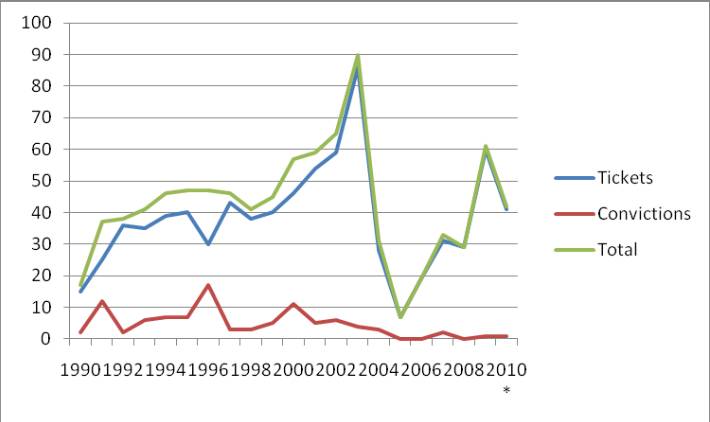 A shocking story from Mark Hume in the Globe and Mail on June 12th reported on a BC Government study on widespread non-compliance with the BC Water Act:

On two dozen lakes selected from around the province, researchers found 420 private property Water Act permits had been issued – but more than 4,000 waterfront “modifications” had been done. That means more than 3,500 lakeshore projects were apparently built without authorization. … This isn’t just a case of widespread non-compliance – it’s an epidemic.

The study, the Lakeshore Development Compliance Project – Defining the Issue Across BC 2008/09 – Phase I, was completed in April 2010, but has only now become public.  Apparently it was introduced as evidence at the Cohen Commission.

Under the Water Act, any changes “in and about a stream” (including a lake) will require government approval.  Failure to get such permission is an offence, and can result in tickets being issued or charges being laid.  So the report found what appear to be 3,500 violations of the Water Act in 24 lakes.

The report emphasizes that it can’t state with certainty that all of these properties are in non-compliance, since:

However, 65% of the observed “modifications” were below the high water mark, where, according to the report, “authorizations would typically be granted only under rare circumstances.”

West Coast Environmental Law has been complaining for some time that the government is failing to enforce environmental laws.

2009 did indeed have the third lowest level of enforcement (including both tickets and conviction) since 1990 – only slightly better than the second worst year (2005).  More importantly,  2009 was, again as predicted, the lowest year since 1990 for convictions.

We are often asked “but what does a decrease in the number of tickets mean on the ground?”  Last year, then Environment Minister Barry Penner insisted that decreasing numbers of tickets meant that more people were following the law, and therefore was a good thing.  For the record, his Ministry had finished the Lakeshore Development Compliance Project study at that point, so he really should have known that problems had only recently been identified.

So this study gives a snap-shot of the impact of lax enforcement on compliance with respect to at least one law.

That being said, we can’t really criticize the current government for a drop in enforcement under the Water Act, because it turns out that the BC government has always been pathetic at enforcing the Water Act.

There has been a shift away from charging people under the Water Act, but given that the number of convictions was so low to begin with, this is only a modest shift.  The fact is that the level of enforcement action is negligible compared to the huge numbers of apparent violations documented in the report.

Let the punishment fit the crime

I’ve written recently about the light penalties for environmental crimes.  Well, let’s consider the appropriate penalty for someone who illegally alters the shore-line of their property to expand their beach, reduce erosion or otherwise increase the market value of their property.

The benefit to a property owner of these actions may be in the tens, or hundreds of thousands of dollars.

The odds of being caught seem to be staggeringly low.

The penalty?  The government seems to have 3 main options that actually have teeth (i.e. not counting letting the offender off with a warning):

As the name of the report implies, there is a Phase II on the horizon.  According to the report:

Phase 2 will focus on developing, testing, and implementing tools to assist staff and partner agencies to develop strategies to address the reasons behind non-compliance over the long-term.

May we suggest that Phase 2 examine the discrepancy between the number of violations found in the report, and the small numbers of enforcement actions taken over the years.  And, of course, the miniscule fines associated with ticketing.

We develop these concepts further in a BC context in our 2007 publication, No Response, on environmental enforcement.  But it seems reasonably clear that the first two of these criteria have been entirely missing from the compliance regime around BC’s Water Act for some time.