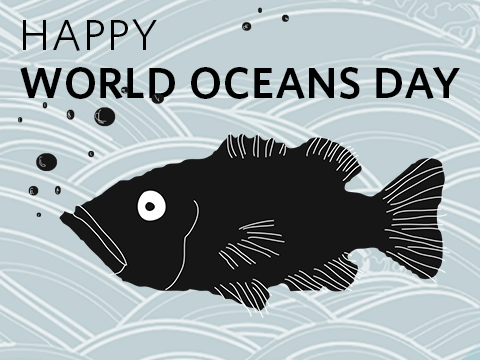 Twenty-five years after Canada proposed the idea of World Oceans Day to the United Nations, people around the world are still celebrating on June 8. It's also a time to reflect.

This week, a Canadian delegation is joining world leaders  in New York to support the United Nations' goal to conserve and sustainably use the world's oceans, seas and marine resources. Canada borders three oceans and has the world's longest coastline, so marine protection should be central to our international reputation. A World Wildlife Fund poll shows   83 per cent of people in Canada are strongly in favour of protecting marine animals and habitats. Canadians expect their political representatives to keep orcas, belugas, salmon, sea otters, puffins and cod healthy.

Prime Minister Justin Trudeau appears to agree. In a 2016 joint statement with then-president Barack Obama, he committed Canada to "substantially surpass" international commitments to protect 10 per cent of our oceans. But our actions have fallen behind our commitments: Canada has protected less than one per cent of its ocean. Recent announcements about proposed protection for Arctic, Pacific and Atlantic waters are welcome signs of progress after decades of stalling.

Marine protection opportunities differ for each coast. On the Pacific Coast, natural features such as glass sponge reefs and marine mammal breeding grounds compete for space with an expanding list of human activities, including increasing oil tanker traffic, commercial fishing and eco-tourism operations. Strong provisions for globally significant glass sponge reefs near Haida Gwaii are a good start on the protection front, but proposed regulations for the Scott Islands — a globally significant seabird area — offer no new restrictions on fishing, shipping or other activities. Similarly, in the Atlantic, the soon-to-be designated Laurentian Channel marine protected area will prohibit fishing but allow oil and gas exploration. In the Arctic, Lancaster Sound provides protection opportunities. Moving ahead is essential as the effects of climate change in the region are dramatic, with warming ocean temperatures stressing northern ecosystems. Ice-free waters, new fisheries and more shipping traffic is making matters worse.

With reconciliation on many minds, Canada is required to engage with Indigenous peoples regarding their territorial waters and ensure free, prior and informed consent. When Indigenous people come together with communities, governments, ocean-based industries and other sectors, biodiversity gains from protection can be balanced with local sustainable development. An integrated management approach that brings together all ocean users to develop management plans for the entire ocean ensures that waters outside  protected areas are also managed sustainably. These negotiations don't always happen on a level playing field, however, as powerful industry lobbyists can pressure government for concessions.

Although international marine protection standards prohibit mining, oil and gas development and industrial fisheries in marine protected areas, that's not always the case in Canada. Just as Canadians don't expect to see oil wells in Gros Morne National Park, the WWF poll shows that 90 per cent of Canadians support a ban on bottom trawling, mining and oil and gas development in marine protected areas. We must stop the double standard of accepting far less protection in marine environments than we do for our national parks.

Strong laws are essential to protecting marine life. The science is clear that marine protected areas  require a set of minimum protection standards and effective protection must exclude industrial activities.  The Oceans Act, which governs Canada's oceans and mandates their protection, must be equally clear: activities that compromise protected areas must be prohibited.

Canada is finally catching up with countries such as Australia and the U.S. by adopting environmental protection goals that support the United Nations' Convention on Biological Diversity's targets. We now have an opportunity to lead the world in creating effective marine protected areas. The government deserves kudos for finally committing to meet and exceed its 10 per cent target. However, scientists remind us that we must not sacrifice quality in the race to meet numbers. It's much more than the percentage that matters; it's how well these marine areas are designed, managed and monitored. Setting the bar too low in the push to meet targets and compromising on quality are short-sighted and don't serve Canada in the long term. If Canada wants to meet expectations at home and abroad, it must do more than draw lines on a map. It must protect the full array of marine life and biodiversity in protected areas.

Canadians value oceans and support the government taking steps to protect the marine environment. It's now up to the federal government to move forward with a stronger Oceans Act and support for marine protection that provides refuge for ocean creatures, ensures economic opportunities for local communities and respects  the rights of Indigenous peoples. Now that Canada is finally creating marine protected areas, let's work hard to get it right. The world is watching.

If you're in Ottawa, join renowned photographer Cristina Mittermeier of SeaLegacy for Beneath Ocean Waves, a public event on Tuesday, June 13, from 6 to 8:30 p.m. at the Canadian Museum of Nature. To reserve your free ticket, please visit: http://bit.ly/beneathoceanwaves

Republished with permission from the Hill Times