Catching up with science: Salmon biodiversity and Aboriginal fisheries rights in BC 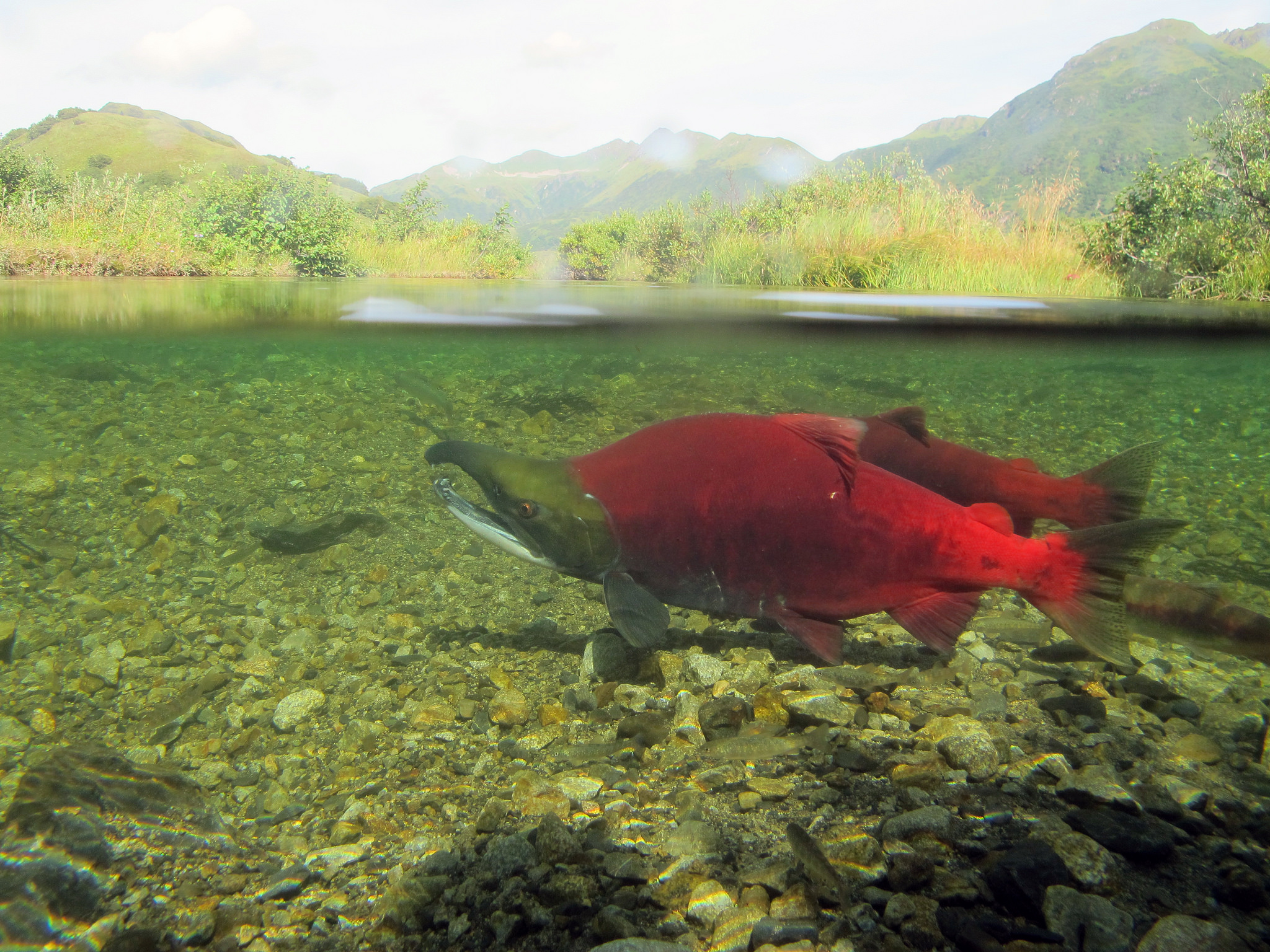 At West Coast Environmental Law, we are passionate about collaboration and integrating science with law. When new, ground-breaking studies are published in the scientific world, it presents a unique opportunity to identify the implications this might have on shaping and influencing laws.

A recent study, “Species and population diversity in Pacific salmon fisheries underpin Indigenous food security” published by SFU researchers Holly Nesbitt and Dr. Jonathan Moore, is a fantastic example. It’s good timing for the publication of this new science, too, as the findings will be valuable for the newly started review of the Fisheries Act.

In a nutshell, the study has demonstrated that higher salmon biodiversity can lead to higher catch stability and temporal availability of salmon at First Nations fisheries within the Fraser River. This means that fisheries that have access to a greater species diversity (i.e. chinook, coho, chum, sockeye, pink) and population diversity (i.e. the number of different populations within each of those species) have more consistent and longer seasonal availability of salmon. The report has profound legal implications for fisheries management and biodiversity conservation.

For First Nations who rely on salmon along the Fraser River as a vital food source, this study could have important consequences for their food, social and ceremonial (FSC) fisheries, protected  under section 35 of the Constitution Act, 1982 which recognizes and affirms existing  Aboriginal and treaty rights.

Constitutional protection of FSC fisheries means that the government cannot infringe these rights without justifying the infringement. The Supreme Court of Canada found that where a First Nation has a constitutionally-protected right to fish for FSC purposes, it takes priority, after conservation, over other uses of the resource.

In assessing the standard to justify infringement, the Supreme Court of Canada has stated there is a “heavy burden on the Crown.” They also noted that “[A]boriginal peoples, with their history of conservation- consciousness and interdependence with natural resources, would surely be expected, at the least, to be informed regarding the determination of an appropriate scheme for the regulation of the fisheries.”

A question that naturally arises from the study is, what additional burdens are placed on the Crown now that scientific evidence demonstrates that biodiversity is a key marker for food security at FSC fisheries? It is likely this study means that the Crown should more carefully and fully consider salmon biodiversity when assessing whether a proposed project would affect salmon allocation and habitat decisions that ultimately affect FSC fisheries.

The study may also have an impact on salmon allocation. According to the judicial inquiry into missing sockeye salmon in the Fraser River, known as the Cohen Commission, many First Nations are concerned about Fisheries and Oceans Canada’s (DFO) current method of determining FSC allocations, believing they are arbitrary and insufficient. The Commission additionally refers to DFO’s acknowledgement that fisheries managers often determine FSC fishing allocations “without an analytical framework” and that “the FSC allocation per capita can be highly variable.” Thus, a more robust and scientifically sound method for determining allocation should include an assessment of salmon biodiversity.

Salmon watchdogs agree. Aaron Hill, the executive director of the Watershed Watch Salmon Society (WWSS) notes that weaker at-risk Fraser salmon stocks can on occasion be overfished, and it is imperative to fully implement DFO’s Wild Salmon Policy, a comprehensive policy aimed at keeping wild salmon healthy on the Pacific for generations to come. Full implementation of this policy was one of the chief recommendations of the Cohen Commission. WWSS monitors the government’s implementation of the Commission’s recommendations through its Cohen Report Tracker.

No habitat, no fish

In terms of habitat protection under the revised Fisheries Act, DFO could improve its system to assess the relative importance of different salmon populations. According to Dr. Jonathan Moore, principal investigator of the study, DFO could pay closer attention to habitat protection for salmon populations possessing unique run-timings (that would extend fishing seasons) or different responses to environmental drivers (that would stabilize catches). Moore states that current mitigation “focuses on replacing habitat, not whether that habitat works or will support the same type of salmon biodiversity”.

As WCEL has been warning since 2012, amendments made to the Fisheries Act significantly weakened habitat protection provisions under the Act. As the current federal government works to restore and strengthen habitat protection, potential amendments to the Act could include a focus on protecting habitat for sub-species that may not be currently given high priority, but that are vital for ensuring healthy runs. See our brief Scaling Up the Fisheries Act for other ideas for amendments.

There is already a process in place seeking public input on amending the Fisheries Act – you can learn more about the process on the federal government’s website here. Stay tuned for a future blog on how to get involved!

Habitat protection and mitigation for lost habitat is also critical for environmental assessments (EA). Current risk assessments do not appear to consistently consider the impact of habitat loss on sub-species of salmon.

As noted by Holly Nesbitt, the other lead author of the study, a new understanding of salmon biodiversity impacts may also have an effect on the geographic scope of environmental assessments. For example, currently an EA may only examine salmon within the study area and exclude consideration of the impact of a project on FSC fisheries outside of the study area.

Salmon migrations in big BC rivers like the Fraser and the Skeena mean that environmental risks to First Nations communities can be spread both upstream and downstream. The new study indicates that loss of upstream salmon biodiversity could impact the stability and season length of downstream fisheries. At least 70 First Nations communities have the right to fish on the Fraser.1 Thus, when upriver projects do cause environmental damage (such as the Mount Polley mining disaster), potential impacts on salmon populations will not just be felt locally. On the other side, salmon migration can spread environmental risks upstream as well.

Another study by the Moore lab in the Skeena estuary found that the Flora Bank location supports juvenile salmon from more than 40 populations of salmon from throughout the Skeena River watershed. Consultation on the proposed Pacific NorthWest liquefied natural gas (LNG) project has had a limited geographic scope and the assessment of this project’s impacts on fisheries was initially limited to nearby Nations, rather than the full range of potentially impacted upriver Nations. Current environmental assessment of projects on big rivers and their estuaries likely fail to capture the full range of impacts, including impacts on constitutionally protected Aboriginal fishing rights.

Studies such as this can inform the law reform process. Canada’s Minister of Environment and Climate Change has announced the establishment of an independent expert panel to review Canada’s environmental assessment processes under the Canadian Environmental Assessment Act, 2012. WCEL’s recent EA Reform Summit convened over 30 experts from across Canada to discuss the ‘next generation’ of EA law. As part of the public comment period on the Panel’s draft Terms of Reference, WCEL submitted that the terms should include “[t]he commissioning of discussion papers on the best available information on leading-edge assessment approaches.” Discussion papers could therefore use this study and others to ensure that environment assessments include the latest in scientific developments.

Canada is legally committed to protecting salmon biodiversity. As the Cohen Commission put it: “DFO’s conservation mandate extends to all fish habitat. It also extends to all fish, not just fish that are important to a fishery...diversity in Fraser River sockeye stocks is essential for conservation and future sustainability of the species.”

DFO’s Wild Salmon Policy (formally known as “Canada’s Policy for Conservation of Wild Pacific Salmon”) has as its first objective to “[s]afeguard the genetic diversity of wild Pacific salmon.” In addition, the Convention on Biological Diversity, to which Canada is a signatory, has “the conservation of biological diversity” as its core objective. We need to take these legal commitments seriously to stem the alarming loss of biodiversity.

The SFU study demonstrates how science and law can work together to help Crown decision-makers approach their decisions relating to projects that may affect First Nations FSC fisheries in a more nuanced and scientific manner. Studies such as these should therefore be used to help ensure that constitutionally protected FSC fisheries are healthy and consistent.

[1] Nguyen, Vivian M., et al. "Getting past the blame game: Convergence and divergence in perceived threats to salmon resources among anglers and indigenous fishers in Canada’s lower Fraser River." Ambio (2016): 1-11.