Earth Day then and now 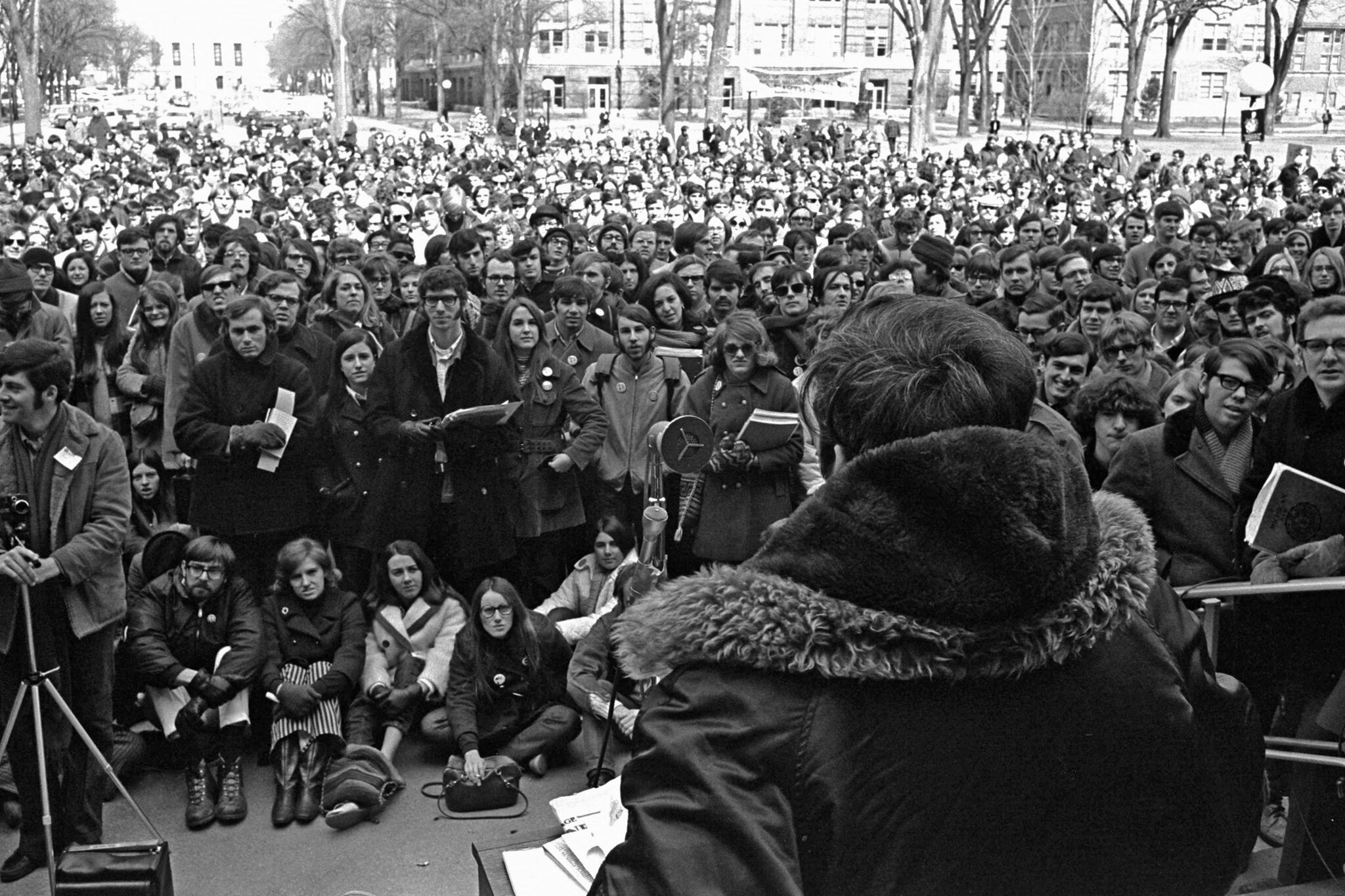 As the world celebrates the 50th anniversary of first Earth Day in 1970, here’s a look at what things looked like then and now.

Twenty million Americans took to the streets on April 22, 1970 – one tenth of the U.S. population at the time! No civil rights march or antiwar demonstration or woman’s liberation protest in the 1960s matched this turnout.

No comparable protests exist today. An estimated 4 million people demonstrated in the Global Climate Strikes of September 2019 in cities around the world.

Events of the day

Earth Day began at dawn in Washington DC with an opening by Native Americans to greet the sunrise. People paraded in cities and towns. Congress had the day off so legislators could speak at public events. Bureaucrats also spoke out – the U.S. Department of the Interior alone provided more than one thousand speakers for events on the day.

Earth Day’s theme this year is “Climate Action.” Unfortunately COVID-19 scuppered the Earth Day Network’s plans for myriad in-person events, including a plan to gather close to a million people on the Mall in Washington to demand climate action. This year, events are going digital instead. For example, instead of a live address in St. Peter’s Square, Pope Francis issued a video call to action, building on his “Laudatio Si” environmental encyclical. Today he said the Earth is not a “storehouse of resources for us to exploit,” holding up Indigenous peoples as a model saying, “they teach us that we cannot heal the Earth unless we love and respect it.” He asked for concrete actions from world leaders at upcoming climate change and biodiversity meetings. The Pope encouraged the creation of a popular movement “from below,” noting that the Earth Day was born this way.

Earth Day was the lead story on the front page of the New York Times. All major TV news networks featured the event. NBC’s “Today Show” focused on the environment for the entire week. The public TV news stations played Earth Day programming all day long on April 22.

This year has seen mainstream coverage of Earth Day on its milestone anniversary – but it doesn’t come close to the media blitz in 1970. One bright spot: National Geographic produced its first-ever flip issue, exploring two different visions for the Earth’s future. One side is How We Saved the Earth - An Optimist’s Guide to Life on Earth in 2070, while the other is How we Lost the Earth - A Pessimist’s Guide to Life on Earth in 2070. As this blog is about hope, we’re encouraged by the words of writer Emma Marris, who makes the case for optimism: “The electrical crackle of cultural change is once again in the air.”

Gaylord Nelson, a US Democratic Senator from Wisconsin, dreamed up the first Earth Day. He had championed environmental causes as Governor of Wisconsin and continued in the Senate where he proposed a constitutional amendment on environmental rights and worked on legislation to ban DDT and nonbiodegradable detergents, preserve wild rivers, and clean up the Great Lakes.

Denis Hayes, a Harvard student who grew up in Washington State, was hired to organize the national event. After Earth Day the organizing group morphed into Environmental Action, an advocacy group known for its actions to defeat the “Dirty Dozen,” 12 legislators it identified each year with horrendous voting records on the environment.

Senator Nelson died in 2005, leaving a profound environmental legacy, recognized by the award of the Presidential Medal of Freedom in 1995.

Denis Hayes’ environmental career includes leading the Bullitt Foundation, a philanthropic organization devoted to funding for the environment. Bullitt’s headquarters in Seattle has been called the world’s greenest building and opened on Earth Day 2013. Hayes is chairman emeritus of the Earth Day Network, and is a speaker taking part in the 2020 Earth Day virtual events.

Richard Nixon, a Republican, was in office during the first Earth Day, later to evade impeachment over the Watergate burglary scandal by resigning. Under Nixon’s presidency the Environmental Protection Agency was founded, and Congress passed seminal laws such as an expanded Clean Air Act, the Endangered Species Act, the National Environmental Policy Act, the Marine Mammal Protection Act, the Wild and Scenic Rivers Act and a modern Clean Water Act. Nixon died on Earth Day, on April 22, 1994.

Donald Trump, a Republican, is in office, and faced an impeachment charge last year. Under Trump’s Presidency, US environmental laws have been gutted.

Photos of women and children in gas masks dominated news stories. Posters and cartoons of the comic strip character Pogo – lamenting “We have met the enemy and he is us” – were everywhere. 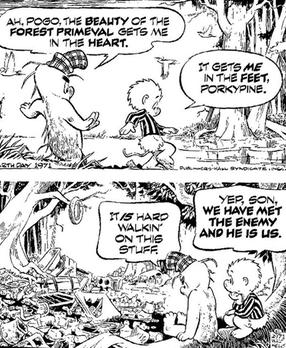 Youth climate strikers are the image of the environmental movement today, featuring Greta Thunberg as the most prominent leader. The image of Earth seen from the moon, the Blue Dot captured from a space, changed the way humans view the planet forever. Footage of children still grabs media attention, especially on marches and in demonstrations.

The internal combustion engine was widely lambasted on the first Earth Day. Students in San Jose, California bought a brand-new yellow Ford Maverick with student donations, pushed it from the dealer's lot into the center of campus, and buried it. In Michigan, at the Earth Day campus-wide “teach-in”, students had a mock trial for a 1959 Ford sedan, charged with “murdering the American public, inciting traffic jams, creating physical and psychological dependence, and discriminating against the poor.” The car was sentenced to death and the students smashed it to pieces with sledgehammers. 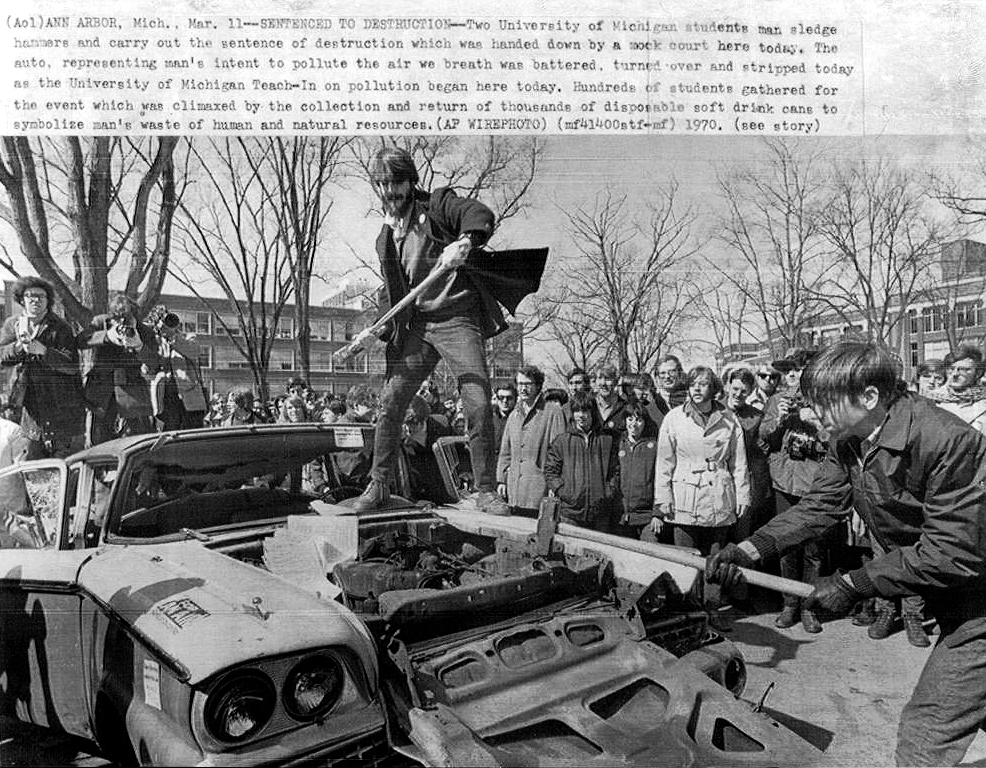 The rise of electric vehicles, mass transit, and pedestrian and bike-friendly cities means cars are no longer the prime Earth Day villain. Look at Norway: the Guardian reports that last month, March 2020, three in four of all new cars sold were either wholly or partly electric.

A major oil spill off the coast of California near Santa Barbara in 1969 raised consciousness about the perils of pollution, and was a precipitating factor in the first Earth Day. The Exxon Valdez spill in 1989 off Alaska was another major galvanizing event, a year before Earth Day’s twentieth anniversary. In a recent interview, Earth Day founder Denis Hayes quipped that he was suspected of planning oil spills to publicize Earth Days.

The risk of spills continues. Controversy abounds over pipeline and tanker projects such as the Trans Mountain expansion and Keystone XL. But now, fears about climate change leading to a potentially ‘uninhabitable earth’ dwarfs older concerns about spills. The message of the “Keep it in the Ground” movement is clear – we must move on from oil and other fossil fuels. In Canada the political power of the oil industry remains strong, as shown by a $1.7 billion government bailout to support the cleanup of orphan wells (a problem that the industry itself should pay for) at a time when oil executives reap huge bonuses and escalating salaries.

In 1970, Jim MacNeill was a constitutional adviser in Prime Minister Pierre Elliott Trudeau's Privy Council Office, writing the one of the first Canadian books on environmental management.

Art Hanson, a Canadian ecologist who studied in BC and then did his Ph.D. in fisheries ecology at the University of Michigan, was one of four organizers of the Michigan Earth Day “teach-in” on the environment.

Joni Mitchell, from Fort McLeod, Alberta, sang “Don’t it always seem to go, you don’t know what you’ve got till it’s gone / They paved paradise and put up a parking lot” in her hit song "Big Yellow Taxi" – released the same month as Earth Day. Later that year, Mitchell performed in Vancouver with James Taylor and Philip Ochs at a fundraising concert for the first campaign of the organization that became Greenpeace.

Before his death in 2016, Jim MacNeill became Secretary General of the World Commission on Environment and Development, also known as the Brundtland Commission, and lead author of its landmark report Our Common Future. He was later the Chair of the World Bank Inspection Panel.

Art Hanson was President of the International Institute for Sustainable Development (IISD) in Winnipeg from 1991-8 and is now an IISD Distinguished Fellow.

According to Joni Mitchell’s website, at least 456 artists have recorded the “Big Yellow Taxi” song, and since 1990 someone has recorded it virtually every year.

There are no readily available records of celebrations on the first Earth Day in Vancouver in April 1970. The city government back then was not a green leader – in October 1970, City Council refused a request by the “Take Back the Earth Committee,” led by Greenpeace co-founder Irving Stowe, to close downtown city streets for a demonstration on urban ecology. However, Vancouver is the birthplace of the world’s most famous environmental group: Greenpeace. The “Don’t Make a Wave Committee” was formed in 1969, and was renamed Greenpeace in 1971, a year after Earth Day.

Vancouver has grown into a global green powerhouse, in its government, NGOs, and citizens. The City of Vancouver pledged to become the greenest city in the world by 2020, and has an Action Plan to get there.

West Coast Environmental Law Association, one of Canada’s first public interest law groups, was founded in Vancouver in 1974, and is going strong today!