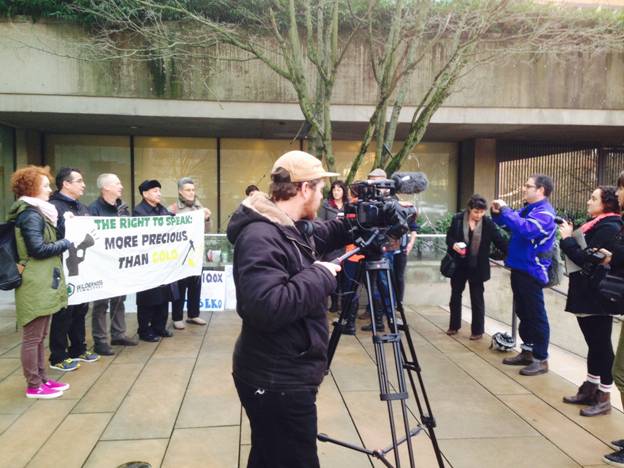 “The right to speak is more precious than gold”. Members of the Wilderness Committee displayed these words proudly on the steps of the Supreme Court of BC as they prepared for a two-week hearing on a defamation claim by Taseko Mines Ltd.

It only took one week working as a law student with West Coast Environmental Law to become attuned to one of the most significant issues related to the environmental law field in British Columbia, and to society at large: the conflict between large corporations engaged in resource extraction, and the voice of communities who are affected by or concerned about resource extraction activities.

In my first week at West Coast I attended the Supreme Court hearing concerning Mr. Alan Dutton’s application for Kinder Morgan’s lawsuit against him claiming $5.6 million in damages to be summarily dismissed, and on the following Monday morning I attended the gathering and media conference outside the Supreme Court organised by the Wilderness Committee for their own lawsuit against them by Taseko Mines Ltd. seeking an injunction and claiming damages for defamation. Both lawsuits raise critical questions concerning the practice of Strategic Litigation Against Public Participation (‘SLAPP suits’) and whether anti-SLAPP legislation to protect freedom of speech should be brought back to the legal landscape in BC.

In a comprehensive Anti-SLAPP handbook West Coast has defined “SLAPPs” as:

…civil actions with little merit advanced with the intent of stifling participation in public policy and decision-making.

SLAPPs are typically brought as an action against allegations such as defamation, conspiracy and interference with contractual relations, and although there may be little substance to the claim, the courts are very reluctant to throw out cases without a full hearing because the parties bringing the claim may construe the action to have some underlying legal basis.

Even though the plaintiff (the company suing) may ultimately be unsuccessful if the case goes to trial (and in some cases the plaintiff may find it equally effective to simply have the lawsuit sit there, looming over the public debate), this type of lawsuit can succeed in intimidating the defendants and other critics. The plaintiff in such lawsuits utilizes its extensive resources to feed a lawsuit that typically makes an insignificant dent in its own funds, but effectively drains the defendant of their time, money and energy. Former Attorney-General of BC, Graeme Bowbrick, referred to this as a “battle of attrition”.

Anti-SLAPP legislation is largely designed to prevent situations of power-imbalance like this by protecting citizens who engage in public participation by speaking up or peacefully protesting against the resource extraction projects of large companies that may take advantage of this obvious imbalance of power.
Defamation and SLAPPs

SLAPPs are often brought under the guise of an ordinary “tort” lawsuit (civil wrongs recognized by law as grounds for a lawsuit). In Taseko Mines Ltd. v. Wilderness Committee the tort alleged is defamation. For a plaintiff to succeed in a defamation action, a plaintiff is require to prove that:

(1) the impugned words were defamatory, in the sense that they would tend to lower the plaintiff’s reputation in the eyes of a reasonable person;

(2) that the words in fact referred to the plaintiff; and

(3) that the words were published, meaning that they were communicated to at least one person other than the plaintiff.

Public participation often involves communication by an individual or group of individuals to the broader public that criticizes the actions of a corporation. This public criticism  naturally has the effect of lowering the reputation  of the corporation in the opinion of the public; hence defamation is such an accessible tort for a plaintiff to allege when suing its critics. The results can be a very one-sided public debate:

Defamation law – the right to sue for harm to one’s reputation –as it is currently understood, creates an uneven playing field in relation to public policy, and is particularly effective at silencing critics.

A company can say anything it likes about its mines, pipelines or fish farms, whether it is true or not (for instance, they can say that there is no harm being done to the environment), as long as it furthers the interests of their shareholders.  Any untruths that they utter about their projects don’t negatively affect any individual’s reputation; but concerned citizens who dare to criticize the very same projects need to be careful (for instance, saying that a project is causing harm to the environment) – because mistakes or untruths about the project could be taken to harm the reputation of the company, and give rise to a defamation claim.
In addition, defamation is a technical and complicated area of the law, and lawyers who practice in this specialized area are very expensive – giving a big advantage to well-moneyed parties.

There is protection to defendants at common law (judge-made law), such as the defence of fair comment (communications made on a matter of public interest that (a) is based on fact; (b) is recognizable as comment; and (c) is an opinion that could honestly be held by a person based on the facts). However, a defendant can only raise this defence during the (often long) hearing – meaning that the defence doesn’t protect anyone from having to spend time and money defending themself during a lengthy court process. Moreover, the BC Court of Appeal has taken a fairly technical approach as to when the defence of fair comment may be available, requiring that the defendant clearly indicate the factual basis for the defamatory statement. One activist had to pay $75,000 after what we described as failing to “footnote” properly.

Taseko’s claim against the Wilderness Committee

I should note that I am not expressing that the lawsuit brought by Taseko is necessarily a SLAPP and without any legal merit, but am demonstrating how easily groups like the Wilderness Committee can fall into a lawsuit as a consequence of their public communications that they believe are in the public interest.

The lawsuit relates to online content published by the Wilderness Committee that expressed its concern for the negative environmental impact that Taseko’s Prosperity mine proposal would have on Fish Lake (“Teztan Biny”). The proposed project is one of the most contentious in the province, and has received criticism from a wide range of groups.  (We note that we ourselves received a letter from Taseko pointing out that we had made a mistake in a blog post about the company.)

Taseko has brought the Wilderness Committee before the court under allegations that they published online communications relating to Taseko’s New Prosperity mine proposal that were defamatory. Taseko claims that the Wilderness Committee’s statements were false and “motivated by express malice” in a “reckless and overzealous campaign to encourage the general public to oppose the Project proposal” and that, as a result Taseko has suffered injury to its reputation.

In its response, the Wilderness Committee submitted that the statements it made relating to Taseko’s proposed project were not defamatory. The Wilderness Committee submitted also that its statements are protected by the defence of fair comment “being statements of opinion, inference or deduction on a matter of public interest, representing views that a person could honestly hold, based upon true or privileged facts, stated or known”.

Quebec has anti-SLAPP legislation.  Ontario is working on it.  In BC, anti-SLAPP legislation did exist (albeit very briefly), but was repealed by the newly elected government in 2001 shortly after the legislation came into effect. Micheal Vonn of the BC Civil Liberties Association, who spoke at the gathering for the Wilderness Committee on the opening day of the hearing, emphasised dissatisfaction with that repeal:

Maybe the government just hasn’t gotten around to having the kind of progressive legislation that would allow us to do this thing and be on par with, you know, those progressive environments like Texas! No, in fact, let me set you straight. We had such a law…for about 8 minutes.

BC’s Protection of Public Participation Act, 2001, before it was repealed, was intended to: “encourage public participation, and dissuade persons and corporations from bringing or maintaining proceedings or claims for an improper purpose”, and gave the courts remedies to examine whether a court-case was a SLAPP at an early stage in the process, as such avoiding drawn out and expensive time in court.

In defamation cases, like Taseko’s claims against the Wilderness Committee, the Protection of Public Participation Act stated, in a section titled, “Defamation”, that public participation constituted an occasion of qualified privilege. This would mean that the communications made public were protected if they were in the public interest, and as such were not deemed to be communicated with malice. This section of the Act protected defendants against situations where plaintiffs were able to bring lawsuits against them that appeared (to the law) to have a somewhat credible basis for action against defamation even when the primary purpose of the lawsuit was to crush public debate.

Debate on the issue of SLAPPs and the need for legislative protection against such lawsuits in BC continues. One of the justifications for the repealing of the legislation back in 2001 was that the courts were already suitably equipped to identify unmeritorious lawsuits and dismiss them if appropriate. Today, however, this argument does not safeguard defendants against what Micheal Vonn of BCCLA referred to as the “punishment of having to go to court to prove that they shouldn’t have been there in the first place.”

What if the right of corporations to sue for defamation was simply just taken away? As we have written previously, such amendments have been enacted in Australian legislation.

In essence this view says that while real people have a right to have their reputation protected, corporate entities – whether corporations, unions, non-profits, etc. – should not. … [The] suggestion … is actually very similar to changes to Australia’s defamation laws, enacted in 2006, that prevented corporations with more than 10 employees from suing in defamation.  Such a ban would shut lawsuits based on defamation before they were even launched, and might be an effective tool in protecting public debate.

Ultimately, what may be most effective is legislation that prevents people or groups involved in public participation from being targeted in the first place.

It’s difficult to show that a defamation law suit is being brought for the sole or dominant purpose of dissuading public participation, so individuals and communities who speak out can easily be brought into the firing line by large corporations, and though the defendants may ultimately be successful in defending their claim, their resources, and often motivation, are exhausted throughout the lengthy process.

The hearing between Taseko and the Wilderness Committee is expected to last weeks, and no doubt its outcome will be fuel for further discussion on the issue.