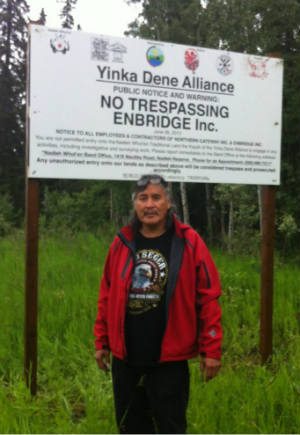 The Yinka Dene Alliance (YDA), a group of First Nations whose territories cover 25 percent of Enbridge’s proposed Northern Gateway pipelines route, is ramping up enforcement of its own laws in the face of efforts by Enbridge to begin preliminary work in YDA territories for the proposed pipelines.  YDA is vocally opposed to the proposed pipeline and its member nations were the driving force behind the Save the Fraser Declaration, which bans the Enbridge pipeline and similar tar sands infrastructure projects from their territories and throughout the Fraser watershed.

The federal Joint Review Panel (JRP) tasked with assessing Enbridge’s Northern Gateway pipeline proposal closed its hearing process in June 2013, but likely will not make its recommendation on whether the pipeline should go ahead until the year’s end.  In the meantime, Enbridge has applied to British Columbia to obtain permits to conduct geotechnical work, including drilling bore holes and clearing trees, in order to better inform the location of the proposed pipeline.

BC, in its own JRP submission, stated very strongly that it opposes approval of the Northern Gateway pipeline because of the serious unaddressed safety and environmental concerns associated with the project.  YDA has called on BC to take concrete legal action to back up its position on the Enbridge project, including denying provincial permits that advance the project. However, somewhat incomprehensibly, BC maintains that the processing of Enbridge’s provincial permit applications is a separate and distinct issue from the question of whether the overall pipeline proposal should proceed.

Although the National Energy Board Act places the decision on whether to reject or allow the pipeline following the JRP recommendation in the hands of federal Cabinet, BC is also responsible for issuing approvals that would be required for the pipeline to proceed and, but for a 2010 agreement between the National Energy Board and the BC Environmental Assessment Office, would have the obligation to conduct its own environmental assessment of the project.  Furthermore, any federal or provincial action to enable the Enbridge project is subject to the Crown’s overriding constitutional duty to deal honourably with First Nations. This includes an obligation to work with First Nations in designing an appropriate process for environmental review and consultation on projects like Enbridge’s.

For this reason YDA has repeatedly sought government-to-government discussions with BC about the pipeline.  None have yet occurred.  In response to Enbridge’s current permit applications, YDA communicated to BC its view that, as a matter of Canadian constitutional law, the Province must consult with YDA on a government-to-government level about Enbridge’s pipeline proposal as a whole before issuing any permits that would advance the pipeline. This is consistent with Supreme Court of Canada decisions which acknowledge that consultation on operational level permits may be of “little effect” in the absence of engagement at higher, more strategic levels of decision-making.

In response to Enbridge’s permit applications, the BC Ministry of Forests, Lands and Natural Resource Operations recently offered at least two land tenures to Enbridge and expects to finalize and issue the related permits within the next couple weeks.  This puts the Province in a position that is difficult to reconcile: BC appears to be delaying government-to-government discussions with YDA about the pipeline until after the JRP has made its recommendation, yet in the meantime it is granting Enbridge permits to conduct preliminary geotechnical work.

Pointing to the Save the Fraser Declaration as a clear expression of the ban on the proposed Northern Gateway pipeline in their traditional territories, YDA nations sent a cease and desist letter to Enbridge dated June 26, 2013, which stated that any entry by Enbridge onto YDA lands in relation to the proposed pipeline would be treated as an act of trespass.  In addition, YDA nations have posted signs in the relevant areas of their traditional territories advising Enbridge employees and contractors that any unauthorized entry will be treated as an act of trespass and have published public notices with similar wording in local newspapers.

As the autumn unfolds, the Province’s response to YDA will show whether BC is ready to match the strong stance it has taken against Enbridge’s proposed Northern Gateway pipeline with meaningful action on the ground.