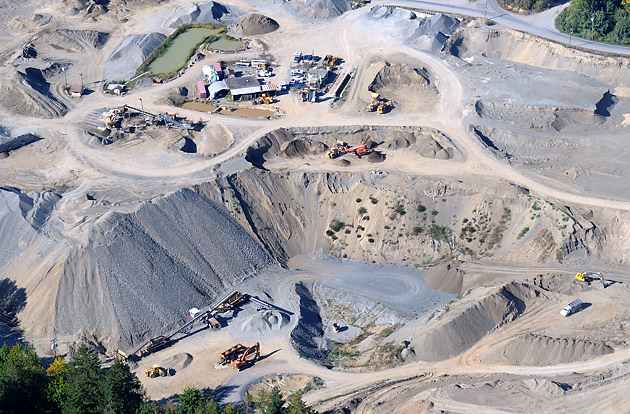 Talia McKenzie first found out that she was going to be living next to a gravel pit the day she picked up the keys to her new home in the Cowichan Valley. Next door, her new neighbours had begun an application process to mine gravel on their property – specifically, 7.5 million tonnes of aggregate extracted over an area of 27.9 ha (about 69 acres). That is a very large gravel pit; yet, as she soon learned, the government would not subject it to an environmental assessment. But Talia isn’t taking ‘no environmental assessment’ for an answer. With the help of our Environmental Dispute Resolution Fund (EDRF), she is heading to court to try to force an environmental review in a case that raises broader questions about loopholes in BC’s environmental assessment legislation and highlights the need for more robust laws to help us “look before we leap”.

The news of this gravel pit proposal was particularly shocking given that Talia’s new neighbourhood lies in the Agricultural Land Reserve (ALR). Established in 1973, the ALR is a provincial zone in which agriculture is recognized as a priority use. Using ALR lands for non-agricultural uses requires the permission of the province’s Agricultural Land Commission (ALC). In 2014, despite a recommendation by the Cowichan Valley Regional District to deny it, the ALC approved an application from Balme Ayr Farm to extract 4 million m3 of aggregate over a period of 15 years.

The proposed gravel pit would see aggregate removed up to 32m deep and replaced with fill. Balme Ayr Farm, a dairy farm, says that the soil quality of their land is too poor to allow for them to produce feed for their herd, and that they need to improve it to produce forage crops, as well as the revenue that gravel extraction will provide. They suggest that once the project is completed and the land is reclaimed, 80% (22 ha) will be improved to class 1 farmland, capable of producing the widest range of crops. While local residents question the necessity of improved soil to a depth of 32 metres, the ALC accepted the views of Balme Ayr Farm, and approved the gravel extraction.

However, the ALC did want the land to be returned as quickly as possible to agricultural use. It was therefore a condition of approval that Balme Ayr Farm, “make all possible efforts” towards meeting the 15-year target listed in their application.

In addition to the ALC approval, Balme Ayr Farm needed a “Mines Act Permit” from the Ministry of Energy and Mines (“the Ministry”) before it could break ground. However, whereas the ALC application was for the removal of 4 million m3 of gravel over a period of 15 years, the Notice of Work to the Ministry was for the removal of 7.5 million tonnes of gravel over an expected 30 years, double the timeframe considered by the ALC. Why the discrepancy?

Under BC’s Environmental Assessment Act, projects are only “reviewable” (require an assessment), if they are listed in the Reviewable Project Regulation and meet or exceed a prescribed size. For gravel extraction, any new “sand and gravel pit” is reviewable if it has a production capacity of

(a)  ≥500,000 tonnes/year of excavated sand or gravel or both sand and gravel during one year of its operation, or

Conveniently, the Notice of Work submitted to the Ministry states that the estimated annual production will be 240 000 tonnes/year of aggregate. Using this production rate, the capacity of the mine would total 960, 000 tonnes over a 4 year period, just shy of the trigger for an environmental assessment.

But wait a minute! As mentioned above, the ALC order approved a 15-year timeframe. The annual production rate over a 15-year timeframe would amount to 500 000 tonnes/year or 2 million tonnes over a four year period, clearly meeting the threshold in the Environmental Assessment Act.

So which extraction rate is the correct one?  Oliver Balme, owner of the farm, has claimed the change is the result of changing financial circumstances, arising from the refusal of the Cowichan Valley Regional District to allow crushing on-site. However, according to a letter from Balme Ayr Farm’s expert agrologist to the ALC (which we obtained through a Freedom of Information request), the 15-year figure is the correct one, and the figures given to the Ministry of Energy and Mines are a “work-around” to avoid the requirement of an environmental assessment:

[T]he EA procedure is very complicated and time consuming and is to be avoided at all costs. There is a work-around available from Mines which involves making an application for an amendment to the permit when the threshold is being reached and which does not require a referral to the EA. The intent is to follow the timeline in the ALC application as closely as possible.

On March 30th, 2015, the Ministry issued a mining permit for the Balme Ayr Pit, without finding the application to be a “reviewable project” under s. 9 of the Environmental Assessment Act.

Should the ALC have approved the gravel pit?

Section 9 of the BC Environmental Assessment Act says (in part):

Despite any other enactment, … [an] employee or agent of the government … must not issue an approval under another enactment for a person to … undertake or carry on an activity that is a reviewable project, … unless satisfied that … the person has a valid environmental assessment certificate for the reviewable project .... [Emphasis added]

Interestingly, court submissions for Balme Ayr Farm acknowledge that the pit, as described to the ALC, would have been a “reviewable project,” but insist (if we understand them correctly) that the ALC Order is not an approval within the meaning of section 9.  Rather, the lawyers for Balme Ayr Farm argue that the ALC Order was a “condition precedent” for the real decision – the issuance of the Ministry of Energy and Mines permit.  By the time the Ministry considered the gravel pit, the project had been scaled back (for economic reasons, according to the lawyer, and not to avoid an environmental assessment).

With funding from West Coast’s EDRF, Talia McKenzie has begun an action in the Supreme Court of British Columbia against both the ALC and Cowichan Valley Regional District, arguing that both made key decisions regarding the gravel pit without first insisting on an environmental assessment, and seeking to challenge this remarkable interpretation of the Environmental Assessment Act. Under the proponent and government’s interpretation of the Environmental Assessment Act, Balme Ayr Farm could not comply with both timelines in the Ministry permit and the ALC Order.  The interpretation also ignores the fact that a major purpose of environmental assessments is to allow for a comprehensive consideration of projects at an early stage – which the Supreme Court of Canada has referred to as “early identification and evaluation of all potential environmental consequences of a proposed undertaking…”

The courts have emphasized the importance of environmental assessment as a way of ensuring that short-term economic gain does not cause major environmental and economic costs down the road:

If the rights of future generations to the protection of the present integrity of the natural world are to be taken seriously, and not to be regarded as mere empty rhetoric, care must be taken in the interpretation and application of the legislation. Environmental laws must be construed against their commitment to future generations and against a recognition that, in addressing environmental issues, we often have imperfect knowledge as to the potential impact of activities on the environment. One must also be alert to the fact that governments themselves, even strongly pro-environment ones, are subject to many countervailing social and economic forces, sometimes legitimate and sometimes not. Their agendas are often influenced by non-environmental considerations.

We hope that BC’s courts will recognize the importance of environmental assessment when it hears this case.

For residents like Talia McKenzie, it should not be possible for a massive gravel pit to escape the environmental assessment process through what looks like creative accounting.

This case demonstrates, yet again, that BC’s environmental assessment process, which only requires an assessment for projects of a particular size, is open to manipulation.  It raises questions about the government’s commitment to ensuring full assessment of potentially environmentally harmful projects.

We hope that the BC Supreme Court will affirm the importance of an early environmental assessment that provides for coordination between government agencies, avoiding precisely the type of inconsistent permits that we see in this case.