How Pioneer Forest was saved 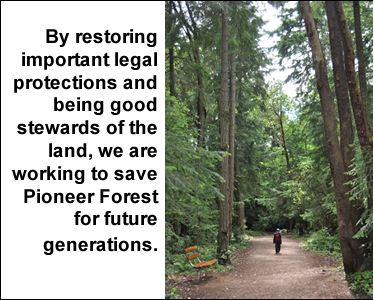 A guest Environmental Law Alert from Friends of Pioneer Forest

In June 2012 word went around our community that Pioneer Forest which was currently owned by School District #68 and leased for a park by the City of Nanaimo was going to be sold.

Pioneer Forest - in North Nanaimo which is almost entirely developed with shopping malls, apartments and residential housing – is our green

space that we all value and has been well used since at least 1966 when the BC government set the land aside as a park for recreational purposes.

Pioneer Forest lies within the Coastal Douglas-fir Ecosystem, one of the rarest and endangered ecosystems in Canada.  The trees in our forest include Douglas fir, Shore pine and Arbutus.  The forest is also home to indigenous orchids, including from the Corallorhiza family, as well as providing habitat and food for animals, including Black tailed Deer and Raccoon.  A wide variety of birds rely on the forest for habitat and food, including Bald Eagle, Barred Owl and Cooper's Hawk to name a few.

This forest offers us a connection to nature that is easily accessible for young and old.  The walking area in the forest is close enough for many residents to walk to without needing to drive to have a nice walk.  The outer boundary trail offers a comfortable 1 km walk in a cool natural setting.  The terrain is an easy walk for people of all abilities.  Pioneer Forest is well used all year long – by the schools, the bird watchers, dog walkers, strollers,  bikers,  and nature lovers. A place to go and enjoy and reflect on nature in an urban area.

In 1983 the provincial government approved the transfer of the forest to the City of Nanaimo “for so long as the land is used for a park for public recreation and enjoyment purposes.”  However, in 1996 the lands were transferred to the School District, and in 1997 the requirement that the lands only be used for public recreation was removed from the title for the property, although the School District continued to allow the public to use these lands as parklands.

The Friends of Pioneer Forest

The information about the pending sale of the park found its way to some concerned citizens who were not about to let this happen.

An informal community meeting was organized in the park immediately. We advertised widely for this meeting - newspapers, flyers, phone calls, and word of mouth.  Approximately 100 people turned out and were keen and willing to work to save this beloved park.  We formed a group to spearhead this project. Fortunately, a lady who was at that meeting knew of West Coast Environmental Law and their good work and suggested we contact them in the hopes of obtaining a grant to help us with our fight to protect this park from being sold for housing.

This first meeting and the formation of our group took place on July 8th 2012 in the park.  We established the “Friends of Pioneer Forest” to “preserve in perpetuity Pioneer Forest located at 6780 Dickinson Road, Nanaimo, B.C.”   We completed an Environmental Dispute Resolution Fund application. Our constitution, bylaws and membership forms were drafted.

July 14th 2012  was our first meeting, at which we accepted members into Friends of Pioneer Forest and elected permanent directors. The turnout was excellent and we received many memberships and donations. Brainstorming took place as to how we should proceed.  Someone had t-shirts made up with an “I love Pioneer Forest Logo” that were sold to help our finances.

We worked tirelessly that summer to make people aware of the fragility of the park and our desire to preserve it.  We formed various committees and attended as many community events as possible, setting up a table with information about the park and the issues.  We sold memberships, collected donations and encouraged people to sign petition forms (which fortunately we were not required to use in the end but collected over 1,200 signatures, a strong showing of support.) By the end of that summer we actually had a membership of 165 strong.

We engaged Patrick Canning, an environmental lawyer, to help with our battle and were thrilled to receive a Grant from the West Coast Environmental Law Environmental Dispute Resolution Fund. Patrick began his research and worked hard advising us on the best way to proceed.  His view was that the requirement that the land be used for recreation had been illegally removed from the title for the property.

We did media interviews, presentations to the District of Lantzville council and the School Board District #68. Letters were sent to various people including, School Board   SD#68, City of Nanaimo, Premier Christy Clark, Cabinet Ministers and others. In October 2012 Patrick wrote to the City and the School District explaining that Pioneer Forest still had to be used for recreation, and that the sale of the land would be illegal.

Our local newspaper The Bulletin had several editorials on this issue so word was out about the park being in jeopardy.  The directors met frequently as a group to follow all the proceedings.

In December, 2012 there was a surprise announcement:  the City of Nanaimo announced that it was going to acquire the Pioneer Forest property from SD#68 in a multi-property land exchange.  The community outcry to save Pioneer Forest from development prompted the City and SD#68 to enter into such an agreement.  We were delighted but told them they needed to designate this property as park under the Community Charter and restore the improperly removed clause restricting use of the property to recreation.

In January, 2013 we received a second grant from West Coast Environmental Law to allow us to continue involving Patrick in discussions with the City aimed at ensuring “that Pioneer Forest remain parkland [and that this is] reflected in the final ownership and zoning arrangements for the property.”

In January, 2013  two directors and lawyer Patrick Canning met with the City of Nanaimo’s  Manager of Real Estate and the  Director of Parks Recreation and Culture.  We indicated our interest in working to improve our relationship with the City in a cooperative manner.  We requested a letter outlining the process the City would be going through to designate the Pioneer Forest property as Park, once it was transferred to the City.  We received the requested letter.

In February 2013 we received further support from the Senior Manager of Parks & Civic Facilities. It was said “the work supports the Parks strategy of sustainability, naturalization and public education and we look forward to partnering with you in enhancing this urban forest.”

On February 18, 2013  the City Council unanimously approved in principle to enter into a formal Land Exchange Agreement with SD#68.  At this meeting one of our directors made a presentation on our behalf advising them we were pleased with the progress made by Nanaimo City Council and SD#68 to reach an agreement that will lead to protecting Pioneer Forest in its natural state.

The directors continued to meet throughout the year to follow the progress of the land transfers and restoration of our park. Some meetings of the general membership were also held to inform them of what was happening.  The forest has now been transferred to the City of Nanaimo and is a dedicated park.

It was all worthwhile

This was a process that was frustrating, gratifying and a great deal of work.  The work fell mainly upon the 5 directors and people seemed to lose interest as time passed.

It is a process that is now over and we are very grateful to have our Park!  The frustration at times in trying to work with other people was difficult. However, when one walks through this park amongst the trees and nature and think “we saved you,” it makes it all worthwhile.

We are so very grateful to the financial support of West Coast Environmental Law and the legal expertise of Patrick Canning, our lawyer. Without them I don’t know if it could have happened.

“The tallest oak in the forest was once just a little nut that held its ground” – Anon.