News & Events » Environmental Law Alert Blog » On how to say no, clearly and loudly
Back to top

On how to say no, clearly and loudly 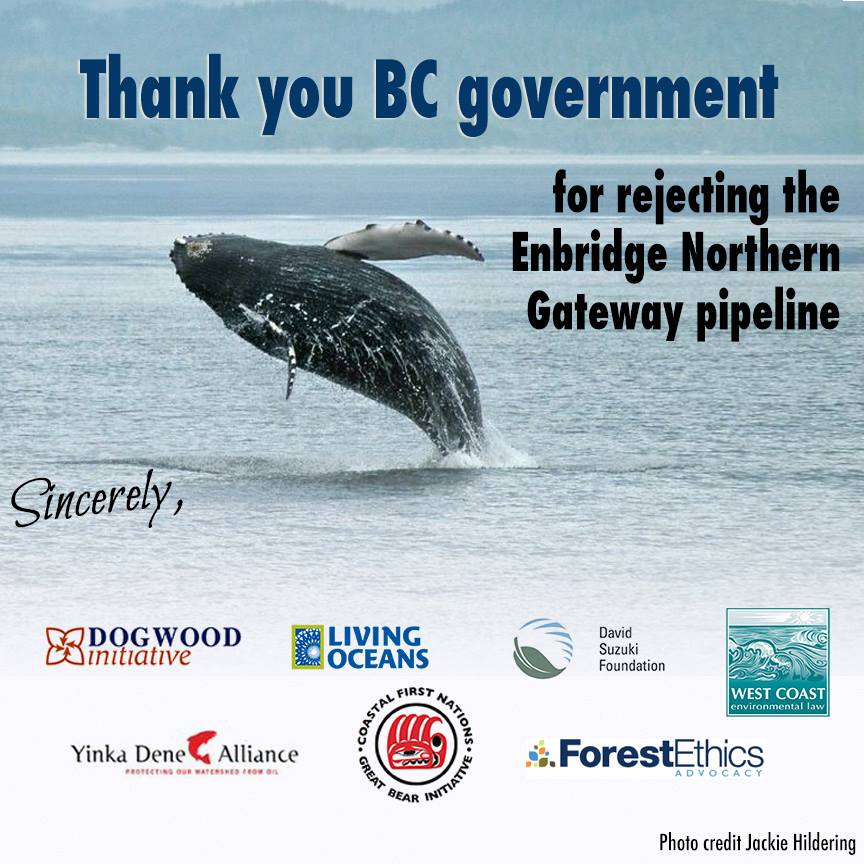 On June 5th Organizing for Change, a coalition made up of West Coast Environmental Law and 11 other leading environmental organizations, wrote to Premier Christy Clark to thank her for asking, on behalf of British Columbians, that the National Energy Board Joint Review Panel (JRP) recommend against approving the Enbridge pipelines and tankers project.  Lisa Matthaus, representing all 12 coalition members, wrote:

The [province’s] final written argument faces head on many key risks and shortcomings of the proposal, and the challenge Enbridge would face in fully addressing them. It reflects the strong public desire to maintain the ecological integrity of B.C.’s coast and rich salmon rivers, as expressed by the wide-spread antipathy to the Enbridge proposal.

Of course, we’ve been very critical of the BC government’s “5 conditions,” emphasizing that BC is “not for sale” as at least one of the conditions would seem to suggest. We think that real leadership would simply say no to these proposals – recognizing that tar sands pipelines across BC and crude oil tankers off our coasts are simply a bad idea for BC.  Even now federal Natural Resources Minister, Joe Oliver, and Enbridge itself are relying on the ambiguities in BC’s conditions to suggest that BC’s no is really just a maybe.  But just days before the province’s written argument was filed, we pointed out that the conditions, if strictly interpreted, would require a clear no: “[I]t is time for the province to say “no” loudly and firmly to the Enbridge project, and to be prepared to do the same regarding Kinder Morgan.”

Despite the vagueness of BC’s 5 conditions, the government’s submissions do make it clear that it will be very difficult to satisfy British Columbians on the safety of these pipelines.

The thrust of BC’s submissions are on the potential environmental impacts of a spill or leak from the proposed pipelines.  The submission does not even mention the province’s condition that BC receive a fair share from the pipeline, and carefully takes no position on whether the condition related to addressing the legal requirements associated with First Nations has been met.

The province’s submissions emphasize the challenges associated with ensuring that these types of oil pipelines address environmental and safety concerns:

The project before the JRP is not a typical pipeline.  For example: the behavior in water of the material to be transported is incompletely understood; the terrain the pipeline would cross is not only remote, it is in many places extremely difficult to access; the impact of spills into pristine river environments would be profound.  In these particular and unique circumstances, [Northern Gateway (NG)] should not be granted a certificate on the basis of a promise to do more study and planning once the certificate is granted.  The standard in this particular case must be higher.  And yet, it is respectfully submitted … NG has not met that standard.  “Trust me” is not good enough in this case.

The rest of the province’s submissions drill down in great detail into the risks associated with pipelines in geographically remote regions, the risks associated with diluted bitumen, the lack of information about how marine spills might be cleaned up.   Take, for example, the province’s discussion of the scientific uncertainties around the transport of “diluted bitumen”, or dilbit, which was involved in the particularly hard to clean up Kalamazoo spill in Michigan:

The Province has serious concerns about the lack of clarity and certainty about what dilbit [Diluted Bitumen] will do if it were to enter the water, the preliminary and indeed contradictory nature of the evidence with respect to NGs’ remediation strategies and actions to address sunken oil, and the fact that its proposed tactics have not been evaluated for use in British Columbia.  These factors … suggest that … NG is not yet prepared to deal with sunken oil in the event that there were a spill of dilbit into a British Columbia watercourse.  …

Many of the province’s points about the risks of a spill in geographically remote locations, and the scientific uncertainty around the dilbit being transported, are the very reasons that British Columbians have been calling on the government to give an unequivocal no, and not muddle about with “conditions.”

What’s sauce for the goose

The BC government’s submission is at pains to point out that “trust us” is not good enough because of the “particular and unique circumstances” of this pipeline.

This may be somewhat disingenuous. First, most of the circumstances – the transport of dilbit, the passing through wilderness areas, the pipeline being built to ship oil by tanker – will apply to any tar sands pipeline that might be built through BC, including the new Kinder Morgan Trans Mountain pipeline project.

Second, the BC government’s own environmental assessments have been known to leave key environmental details to be addressed through future studies.

We agree that “trust us” is not good enough when dealing with major environmental risks.  But we don’t agree that that principle – a precautionary principle based on assessing the risks before they occur – should be limited to the Enbridge pipelines and tankers project.   Making sure that risks are evaluated properly and addressed up front is a basic principle of good environmental management.

Climate change is the elephant in the room in BC’s submissions.  It is one of the most significant reasons to oppose the Enbridge pipelines and tankers project, and it does not warrant a mention.  BC has shown its climate leadership – and saying no to the project is an opportunity to draw the links between tar sands oil and that climate leadership.

Once again, we are very glad to see that Premier Clark and her government have said “no” to Enbridge.  The pipeline company, the federal government, and others seem to think that they can persuade her to change her mind.  British Columbians will be watching carefully and will insist that Premier Clark continue to show leadership not just on the Enbridge tankers and pipelines project, but on other projects that would bring tar sands oil to BC’s coast.  True “clarity” on these projects would be to say no to all tar sands pipeline and tanker projects and to take concrete legal action to back up this reasoned position.