In the month of climate action my government gave to me… 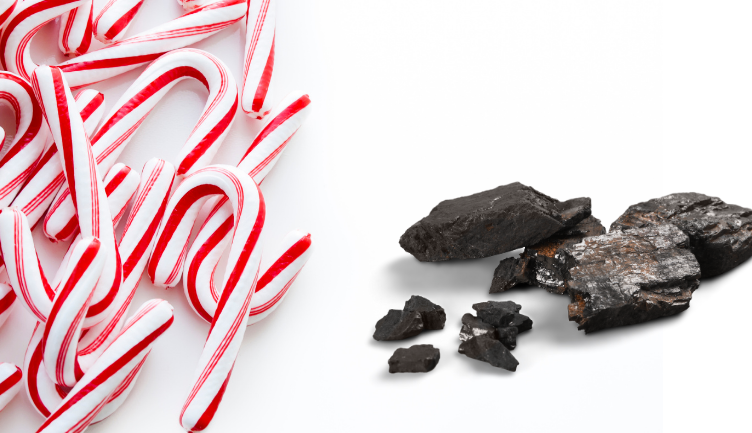 It may be the season to be jolly, but December is apparently also the season for governments to unveil their plans for climate action. This month the federal and BC governments have unveiled major plans, reports, targets and discussion papers. So let’s take a minute to walk through them and say whether our governments deserve candy canes or lumps of coal (not to be burned) for their efforts on climate change.

Let’s preface by acknowledging the obvious: climate change is not a festive subject. In 2011 the David Suzuki Foundation courted controversy with its “Where will Santa live?” campaign. Since then the global concentrations of carbon dioxide have only risen, which means that Santa is getting pretty annoyed by now. Climate action that might have looked good in 2011 now looks inadequate, and Canada (or BC) actually doing its part to fight climate change will require a massive effort. All of which is to say, even “good” action that earns a candy cane should likely be stronger.

Following up on its November announcement of a new climate law, on December 11th Prime Minister Trudeau unveiled a new Climate Plan – for the first time showing how the Canadian government plans to deliver on its commitment, made by former Prime Minister Harper, to reduce the country’s greenhouse gas (GHG) emissions by 30% below 2005 levels by 2030. According to the government the plan will achieve somewhere between 32% and 40% emissions reductions, depending on the level of climate action from the provinces and territories.

So, candy cane or lump of coal?

Viewed in isolation, this plan has one fundamental flaw: the unambitious targets. Experts say that the world must reduce its GHG emissions by 45% by 2030 to avoid a 1.5°C increase in global temperatures and that Canada’s fair share of those emissions reductions would be 60% below our 2005 levels by 2030, not 30% or even 40%.

If the plan only achieves the lowest anticipated reductions – 32% – that number is far too close to the 30% target that everyone from Elizabeth May to the Liberal Party itself has recognized as inadequate and not based in science. The plan is also arguably five years late, since the Liberals promised in the lead-up to the 2015 election to come up with science-based targets and to coordinate with the provinces to achieve them.

However, this plan is one part of a series of climate-related initiatives that are in the process of being rolled out. Notably, the government has promised to set a new national climate goal for 2030 in the near future, which must be more ambitious than the 40% maximum reduction projected under the plan if we are to do our fair share towards avoiding catastrophic climate change (at which point, presumably, this plan will need to be strengthened to achieve the new goal).

Canada has never had a plan that comprehensively describes the actions required to meet a climate target, and we choose to interpret this plan as a good first step towards a more ambitious plan and target in the near future. 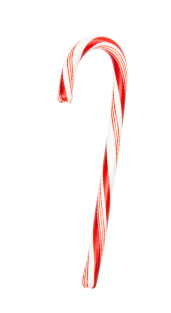 If that future target continues to fall short of what science and equity demand, we’ll hand out the coal at that point.

For the time being, take a candy cane.

The BC government made a number of climate-related announcements this December.

Climate plan MIA for another year

When the BC government unveiled its CleanBC plan at the end of 2018, Environment Minister George Heyman freely acknowledged that the plan would only get the province three-quarters of the way to its legislated 2030 goal of reducing emissions by 40%. He pledged that in 18-24 months the Province would unveil additional measures that would get us all the way to the 2030 target.

That deadline expired on December 5th, with no plan in sight, and on December 17th the government confirmed (in its accountability report, see below) that no plan is expected until the end of 2021. 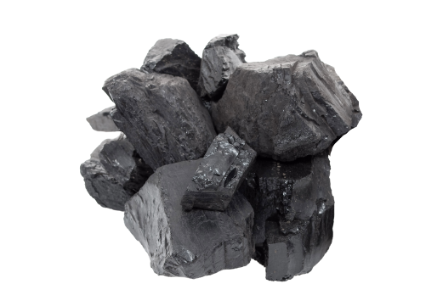 Given the urgency of climate change, we cannot afford to wait another year. A lump of coal, definitely.

The headline from the report is that BC is doing really badly at achieving our climate goals. In 2018, which is the most recent year we have records for, the province’s greenhouse gas emissions rose yet again – to the point that we are 7% above our 2007 emissions level (which is the year that our targets are based on), rather than on track to meet our target. Add to that changes in the way that 2007 emissions level was calculated, and it turns out that CleanBC will probably only achieve between 56% and 72% of the reductions necessary to meet our 2030 target – so BC has even more work to do.

This is hugely disappointing, but it is important not to shoot the messenger. The report covers emissions to the end of 2018 and the CleanBC plan was not unveiled until December 2018. While the BC NDP government might be criticized for taking a year and a half to get a climate plan in place, they came to power after almost a decade of emissions moving in the wrong direction.

A major purpose of BC’s Climate Change Accountability Act is to give us these types of honest snapshots so that the province can correct course and get to its climate change goals. To the extent that the government does more as a result, the Act and report are doing their jobs. Certainly, we should not give the province a lump of coal for being honest.

The Accountability Act sets out some specific content that the report had to include, and by and large it does so. However, there are areas for improvement. Notably:

At the end of the day, we’re not sure that delivering a report that the government was required by law to deliver warrants a candy cane, but we’re certainly glad to see it and the conversation that it starts. 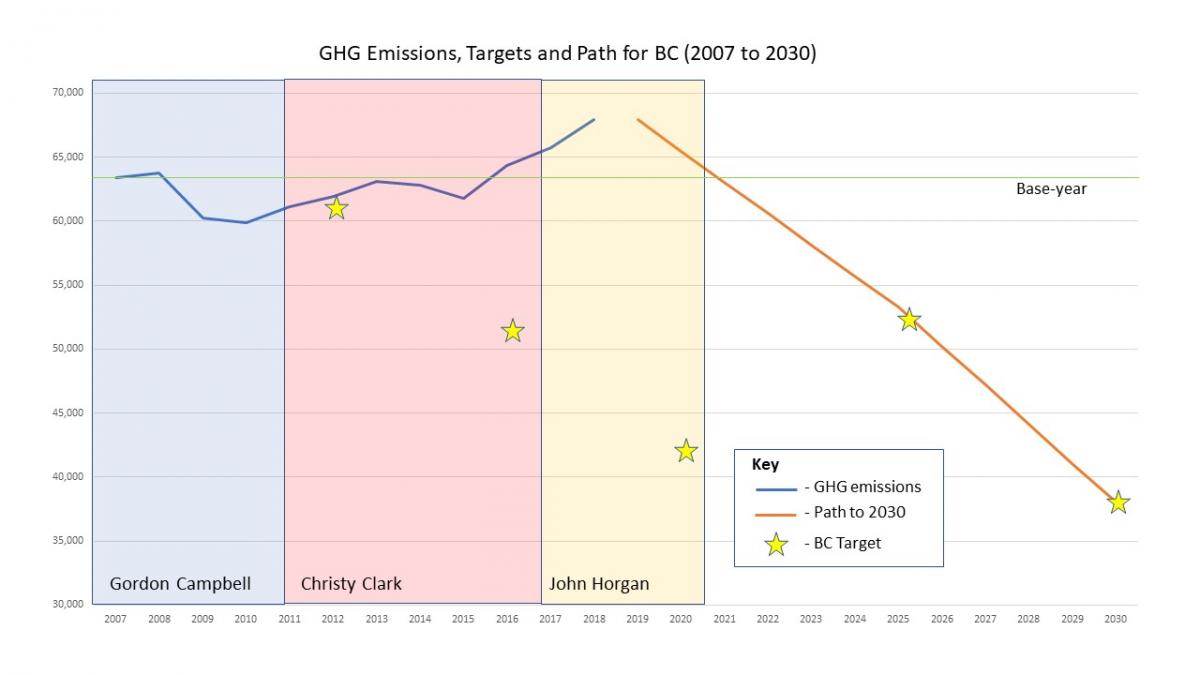 At the same time as the report, the government announced its 2025 interim target – a 16% reduction relative to 2007 levels. The Climate Change Accountability Act requires an interim target for a year between now and 2030 to be formally declared by the Minister of Environment and Climate Change Strategy by December 31st.

I’ve been debating with colleagues whether this target warrants a candy cane or a lump of coal. On the one hand, it is clearly inadequate to where we should be. The BC government’s 2016 target was an 18% reduction – so the 2025 target is actually less ambitious than the target we were supposed to achieve a decade ago. Add to that the fact that the world needs to rapidly decarbonize, and it’s obvious why some environmentalists are underwhelmed by 16% by 2025.

However, while inadequate compared to where we should be, I would argue that the target is relatively strong compared to where we are. Since BC’s emissions are significantly higher now than they were in 2007, getting to the 2025 target involves dropping BC’s GHG emissions by about 23% in five years, leaving a further 24% to go to in the latter half of this decade.

Our emissions have been rising, not dropping, and that’s not going to turn around overnight (although we’ll see what the COVID-19 pandemic has done to 2020’s emissions). Getting to the 2025 target requires us to bend the curve before we can make quick progress to achieving it.

I would love to see BC go further, faster, and it’s possible that the province could do so if it prioritized climate change with the same urgency as COVID-19. However, I will go out on a limb and say that the province’s 16% by 2025 target does deserve a candy cane.

The Climate Change Accountability Act also requires the province to set sectoral targets by the end of March 2021. Although the Province didn’t say much about this in its December announcements, it did quietly launch a consultation with stakeholders this month, which will continue into January. We’ll have to wait to see whether those targets are ultimately strong enough to warrant a candy cane or not.

We do note that during the recent election campaign Environment Minister Heyman pointed to these sectoral targets as a guarantee that liquid methane/natural gas expansion will not mean that other sectors of the economy need to do more than their fair share to meet climate targets – so feel free to encourage the government to follow through on that promise.

At the end of the day, I would give the federal government a candy cane for its climate plan (and perhaps because I want to believe that it is a stepping stone toward more, and more ambitious, climate action). I would give the BC government both a lump of coal (for breaking its promise to unveil a road map to 2030 and instead pushing it off for a year) and a candy cane (for its new 2025 target).

What do you think? Am I an overly generous Santa or a miserly Scrooge when it comes to climate change praise and criticism? Tell us in the comments below.