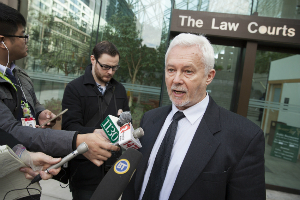 To what extent does our society afford us a right to freedom of expression?

This is a question Mr. Alan Dutton must be quizzically trying to answer as he finds himself tied up in a lawsuit with Kinder Morgan. The oil company claims $5.6 million in damages against him, arguably for no further reason than attending a protest on public land, encouraging others to do the same, and maintaining a website as a means of communication about the issue. Mr. Dutton was named as one of five defendants in an action brought by Kinder Morgan for an injunction last November, and while the other defendants decided to settle out of court, he instead brought an application for summary dismissal of the legal actions taken against him.

It was this application that brought Mr. Dutton to the Supreme Court of BC on Tuesday morning. As Justice Wong entered the courtroom at 10:00am, every seat in the public spectator section was taken; many local Burnaby residents and members of the group Burnaby Residents Opposing Kinder Morgan Expansion (‘BROKE’) had turned up in support.

Why was Alan Dutton sued?

Of the many people who attended the demonstrations on Burnaby Mountain on 29 October 2014, why was Mr. Dutton named as a defendant in the proceedings?

Mr Neil Chantler argued for Mr. Dutton that the evidence tying Mr. Dutton to the unlawful protesting activities on Burnaby Mountain was as meagre at best: he was editor of the website for BROKE (which was an organisational role involving postings for meetings, developments of the expansion project, and educational purposes generally) and was quoted in a newspaper article in which he expressed his opinion about civil disobedience. Mr Chantler identified the preference of litigators to avoid lawsuits against nameless wrongdoers but asserted that Mr. Dutton had done nothing approaching the tortious conduct alleged. The only reason Mr. Dutton is connected with the other defendants, it was argued, is because their names appear in the same news article in which Mr. Dutton expressed his opinion in opposition to the pipeline.

Mr. Dutton therefore submitted that, in the absence of any other good reason, he was named by Kinder Morgan as a defendant for an improper purpose: to discourage him and others from continuing their demonstration and expressing their opposition to any further work on the Mountain.

Mr. Dutton has stated that this characterizes the action as a SLAPP suit (Strategic Lawsuits Against Public Participation). These lawsuits are characterised in numerous states of the US to be frivolous and have no legal merit. They can also be characterised as being brought primarily to silence criticism. Mr. Dutton argued that his case is a SLAPP suit, as he submitted action taken against him was intended as an example to discourage other people in opposition to Kinder Morgan’s work from engaging in any further acts of protest or public debate.

Among a complex web of procedural arguments put forward, Kinder Morgan submitted that if Justice Wong could find some possible basis for a claim, Mr. Dutton’s abuse of process argument falls flat, and that for Mr. Dutton’s application to be successful, the judge needed to be satisfied that Kinder Morgan would be bound to lose at trial. In general judges are very reluctant to throw out cases that might, possibly, succeed a trial.

It seemed the main underlying issue that Justice Wong considered throughout the case was whether or not Mr. Dutton could be liable to any extent under the tort of conspiracy to injure or obstruct, because this would be basis for a claim by Kinder Morgan. Justice Wong interrupted Mr. Chantler’s response to emphasise that Kinder Morgan’s argument was not that Mr. Dutton physically participated in the unlawful protest, but that his actions beforehand (in managing the website and a “phone tree”) inferred that he implicitly encouraged people to attend the exploration site and restrict the work from being completed. This was not a positive note for the hearing of submissions to end on for Mr. Dutton.

During Mr. Chantler’s closing remarks, Justice Wong reiterated the findings of Associate Chief Justice Cullen, who granted the interlocutory injunction, that the evidence against Mr. Dutton could “to a lesser extent” than the other defendants, nevertheless be linked to a “coordinated effort to thwart the plaintiff’s representatives from performing their duties through the use of unlawful means.”

The hearing was shortly after adjourned, with summary judgment to be delivered at 4:00pm that afternoon in the courtroom.

Justice Wong gave summary judgment that, on the evidence, Kinder Morgan’s purpose was clearly to prevent the continued obstruction by protest with respect to their exploratory work. He interpreted the interlocutory decision of Associate Chief Justice Cullen as holding that there was some evidence that could support a claim of conspiracy against Mr. Dutton and therefore there was a basis for the claim.

The question “Why Alan Dutton?” still is largely unresolved. Why Mr. Dutton, who may only be connected to the unlawful protesting by inference, and not any of the other numerous protestors who are recorded on film? Yes, the evidence could theoretically support the existence of a conspiracy to obstruct, but the evidence dragging Mr. Dutton in as a defendant to this claim is certainly not overly convincing, and it is doubtful whether it would satisfy the “onus of proof” (demonstrating that Mr. Dutton’s involvement in the alleged conspiracy was “more likely than not”).

This identifies the problem that, in situations involving civil disobedience, associated people who are advocating only for legal protest may be swept into the firing line of legal action. The present case with Mr. Dutton demonstrates difficulties the court faces in differentiating lawful and unlawful participants in a public protest and this is concerning for those so inclined to publicly express their opinions to any issues in the public interest.

It should be noted that this application for summary dismissal may not have been the appropriate forum for evidence to be meticulously scrutinised. “Summary dismissal” is generally used where there is not a lot of dispute as to the evidence.  Mr. Chantler was seeking to use the procedure to ask the Court to create a remedy for a defendant who is caught up in a lawsuit that has little to do with them.

The focus on SLAPPs may, in a technical legal sense, have been a distraction (although we applaud Mr. Dutton for raising the issue). Ultimately, should it matter whether Mr. Dutton was named because Kinder Morgan wanted to target its critics (a feature of a SLAPP suit) or because it was reckless as to who it included in its lawsuit? It appears that the only thing that Kinder Morgan knew about Mr. Dutton was that he was opposed to the pipeline and was working to ensure that opponents could make their views known.  Saying that it is OK to sue him under those circumstances – even if the “predominant purpose” was to stop the protests – does not strike the right balance between freedom of speech and the rights of Kinder Morgan. As Burnaby Now asked in a recent opinion piece:

[T]he fact you can sue a group of people, claim millions in damages and blame a few in the crowd for the acts committed by the whole is alarming. … What happens if you are at a protest and someone throws a brick through a window? Could you be sued because you're an easy face to pick out of the crowd?

Unfortunately, Justice Wong did not perceive the potential that law-abiding protesters might get caught in the cross-fire as a problem, as long as Kinder Morgan had a “legitimate” purpose for its lawsuit.

According to media reports, Mr. Dutton and his lawyer are currently considering whether to appeal this decision.

If they do not, this matter may not be quickly resolved.  It was suggested in the course of the application that neither party would like the matter to continue. In other protest-related lawsuits, the litigation has often lingered for years, or even decades (lawsuits related to protests in the Walbran Valley in the 1980s are still outstanding, for example).

If the lawsuit somehow finds its way to a full trial, further analysis of evidence may lead to a different outcome. The denial of Mr. Dutton’s application may have been more the result of the complexities of court procedure than the assessment of the evidence. It will be interesting to follow the next steps taken by the parties and how the proceedings affect public demonstration activity based on environmental concerns further down the line.

And, of course, a next step for the rest of us is to ask whether BC needs anti-SLAPP laws that better protect freedom of speech.