Kinder Morgan’s risky Trans Mountain Pipeline expansion just got a whole lot riskier, just as the company was taking steps to offload some of that risk onto Canadian investors.

That is why this week, we released a new legal brief outlining the legal risk for the project.

Much of the conversation about risk and Kinder Morgan’s new pipeline and tanker proposal has been on the physical risks of the project, which are well known: a major oil tanker spill would decimate the Burrard Inlet and the Salish Sea, killing up to 500,000 birds, making a million people sick, and costing BC residents billions in cleanup and lost revenue. A spill anywhere on the pipeline route would impact drinking water and the hundreds of salmon-bearing rivers, including the Fraser and the Thompson. A fire at the Burnaby Mountain tank farm would be catastrophic. Not to mention the climate impacts of expanding the Alberta tar sands.

But while Kinder Morgan is willing to sacrifice our safety and health for their own profit, they are not willing to take on much risk themselves. They paid for the expansion project regulatory costs with their customers’ money, racking up a $136 million war chest to cover the airwaves in ads, pay an army of lawyers to overwhelm and intimidate the public, and to access political power through their lobbyists.

With over $35 billion in debt, Kinder Morgan couldn’t afford to borrow the money to pay for the new pipeline. They tried, unsuccessfully, to get a big investor to partner on the project. However, no sophisticated funds, including those that specialize in pipelines and infrastructure, thought it was worth the premium that Kinder Morgan wanted. In the end, Kinder Morgan formed a new public company to see if it could be financed through an initial public offering (IPO).

The big question was whether investors would bite on Kinder Morgan’s hook.

Looking at it with knowledge of the legal and financial risk associated with the project it seemed clear to us that – like a fishing lure – it may look shiny at first glance, but look a little closer and it’s just cheap plastic concealing a barbed hook. Would investors take the bait?

Pipelines, like utilities, are generally seen as low risk investments: stable returns on large capital expenditures. As Warren Buffet famously said: “you don’t invest in them to get rich, you invest in them to stay rich.” The Oracle of Omaha recently sold all of his holdings in Kinder Morgan - does he know something others don’t?

Here’s the thing about Kinder Morgan’s Trans Mountain Expansion Project – it is not your typical pipeline. In fact, it is not a low-risk investment at all. Here’s why:

The political risk resulting from the BC election is clear: a majority of British Columbians supported parties who oppose the pipeline, and the NDP/Green coalition has committed to: “Immediately employ every tool available to the new government to stop the expansion of the Kinder Morgan pipeline, the seven-fold increase in tanker traffic on our coast, and the transportation of raw bitumen through our province.”

Public opposition in BC remains high. Over 21,000 people have signed the Coast Protector pledge to do “whatever it takes” to stop the project. However, no one wants to see a repeat of what happened in Standing Rock. That is why many First Nations have launched legal challenges against the various Kinder Morgan approvals. Like Enbridge Northern Gateway before it, these legal cases could stop the project in its tracks. 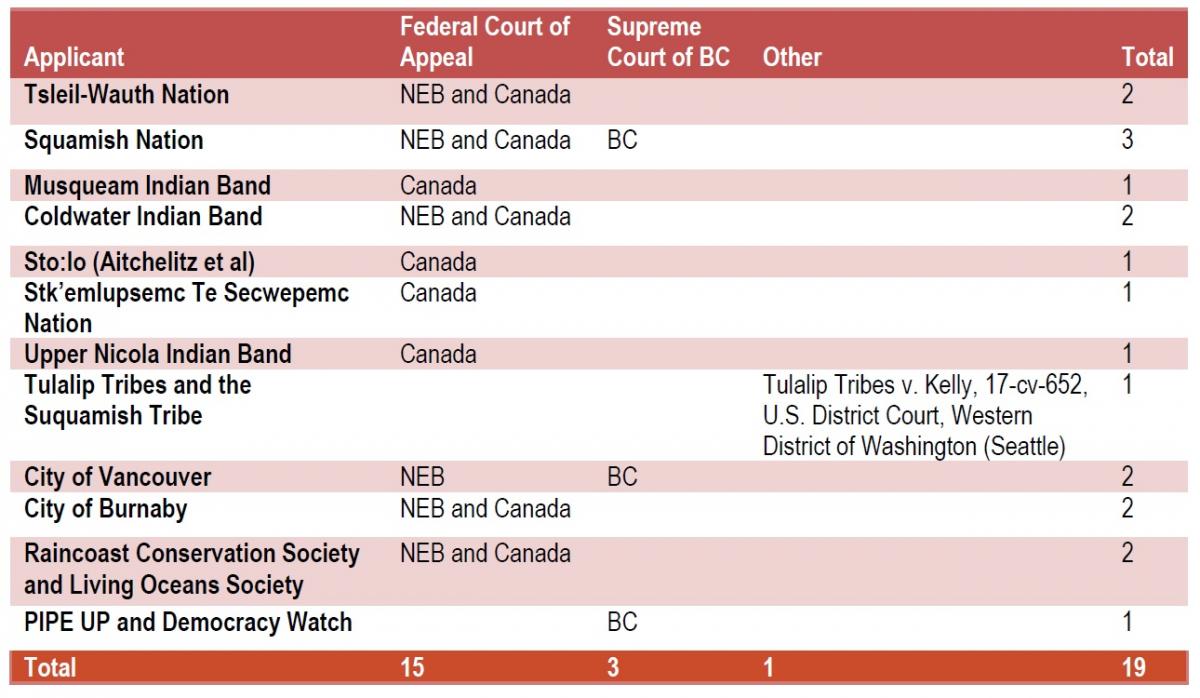 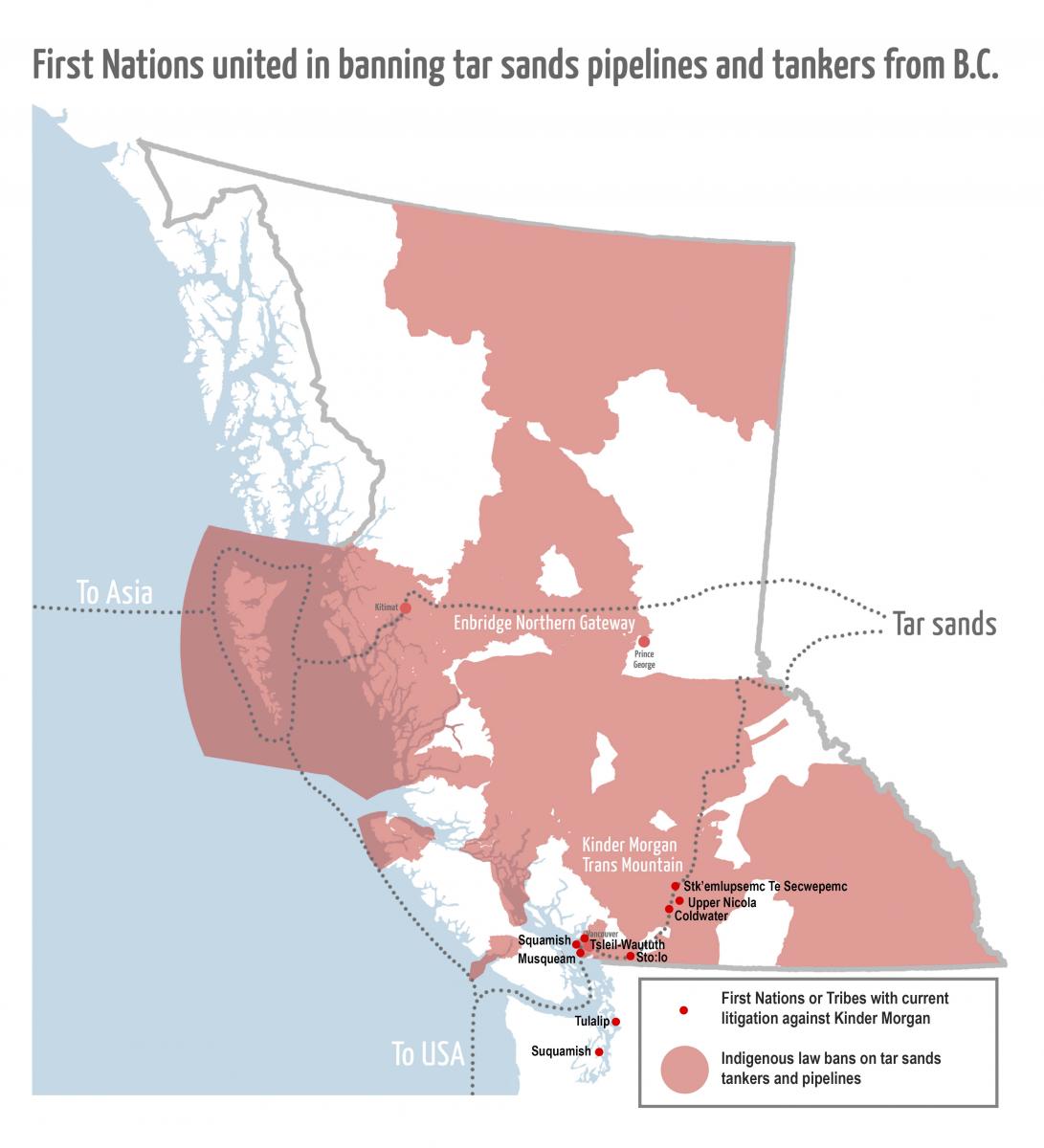 These legal challenges highlight issues of constitutional, administrative, procedural, and statutory law. They allege, among other issues, that a) the government failed to address concerns raised repeatedly by First Nations, constituting a breach of the constitutional duty to consult and accommodate; b) the NEB report was flawed due to breaches of the principles of procedural fairness; c) the government unjustifiably infringed claimed Aboriginal rights and title; d) the government breached its fiduciary duty to the affected First Nations; and (e) that the NEB and Cabinet failed to comply with the statutory requirements of the Canadian Environmental Assessment Act 2012.

Each of the First Nations’ legal challenges at the Federal Court of Appeal argues that the highest level of consultation is required, and that to date, the level of consultation has been inadequate. In many cases, the federal government has conceded that the duty to consult is at the high end of the legal spectrum. Two of the applicant First Nations have had fishing rights confirmed by the Supreme Court of Canada (SCC) in waters affected by the Project. Most of the legal challenges assert that the First Nation has unextinguished Aboriginal title or rights over the proposed pipeline and tanker route. In the landmark Tsilhqot’in decision, the SCC stated:

if the Crown begins a project without consent prior to Aboriginal title being established, it may be required to cancel the project upon establishment of the title if continuation of the project would be unjustifiably infringing. [emphasis added]

Kinder Morgan has stated that the success of their new company is “substantially dependent” on the construction and operation of the new pipeline. They state that: “[T]hese [legal] claims, if successful, could result in the total stoppage of the Trans Mountain Expansion Project, which stoppage would have a material adverse effect on the Business.”

Further, the company has said:

Potential impacts of negative public opinion or reputational issues may include delays or stoppages in project execution, legal or regulatory actions or challenges, blockades, increased regulatory oversight, reduced support of the federal, provincial or municipal governments for, delays in, challenges to, or the revocation of regulatory approvals, permits and/or Land Agreements and increased costs and/or cost overruns in respect of the Trans Mountain Expansion Project and/or the loss or degradation of business of the Business generally. (p.37)

During the Burnaby Mountain standoff, which resulted in over 100 people getting arrested, Kinder Morgan stated in an affidavit that: “the loss of revenue to Trans Mountain due to the delay in Project start-up is likely to exceed $88,000,000.00 per month of delay.”

Investors are taking note. One commenter called the IPO a “dog with fleas.” Another declared “High risk...No reward.” And several commenters have stated that they were not buying the stock due to its risk profile.

Whether it’s a dog with fleas, or a shiny fishing lure, investors need to understand the financial risk related to this project. And that is why we have released our new report.

You can read it here.