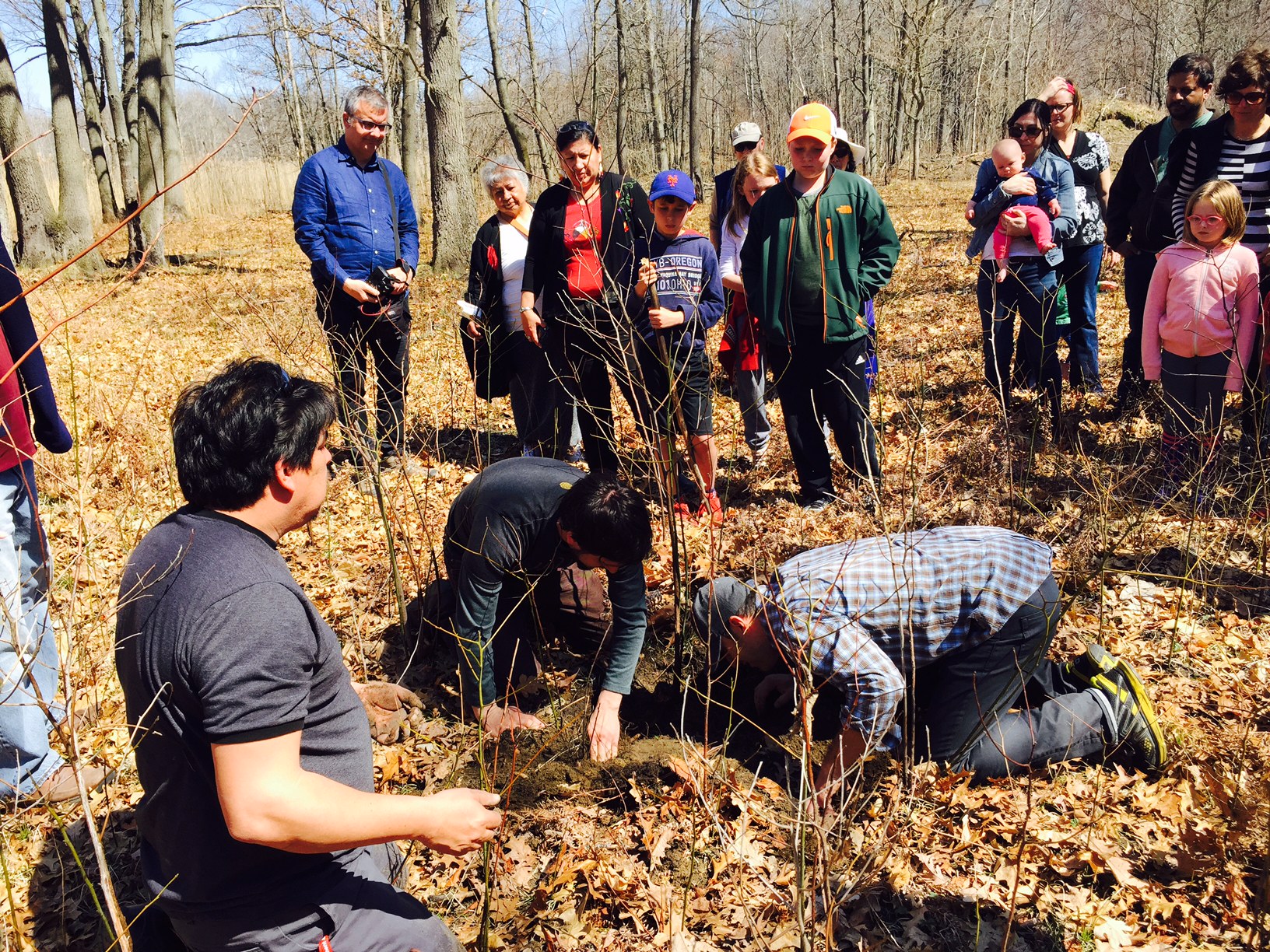 Last month at the invitation of Professor Val Waboose and the Windsor Law Faculty, I traveled with Anishinaabe scholars John Borrows and Heidi Stark to Walpole Island First Nation in Ontario to assist with, and learn from, a four-day Anishinaabe law camp.  The camp was organized in part to fulfil Windsor Law’s commitment to implement Recommendation #28 of the Truth and Reconciliation Report which states (in part):

We call upon law schools in Canada to require all law students to take a course in Aboriginal people and the law, which includes the history and legacy of residential schools, the United Nations Declaration on the Rights of Indigenous Peoples, Treaties and Aboriginal rights, Indigenous law, and Aboriginal–Crown relations.

The camp offered the law professors who attended the opportunity to expand their knowledge in each of these areas, as well as a unique opportunity to learn about Anishinaabe law from the land and the Walpole Island First Nation community.

The gathering began with a welcome feast for all the participants, and a talk by Professor Borrows about the sources of Indigenous law.  He discussed sacred law, natural law, deliberative law, positivistic law and customary law, all of which he has also written about in his foundational text Canada’s Indigenous Constitution.  He also indicated some of the resources that can be used to access Indigenous law, including stories, language, songs, ceremonies, Elders, families and the land.

One Anishinaabe concept introduced at the camp was “Aki-noonaagewin” which Professor Borrows loosely translates to “Earth’s teachings.”   He explained that one way in which the natural world is a source of law for Anishinaabe people is that individuals are encouraged and taught to watch the trees, plants, animals, insects, rocks and waters and analogize or distinguish between their behavior and human activity.  An example of this is seen in a teaching I received from Anishinaabe elder Tony Chegahno:  On a forest walk he pointed to two trees: one tall, thick and robust looking, the other shorter with spindly branches and asked which of them was stronger.  At first, I pointed at the taller, thicker tree, but then Tony drew my attention to the soil that each of the two trees was growing from.  While the taller was planted in rich, deep soil, the more spindly tree was growing out of a sheet of rock.  Incredibly, the little tree had managed to push its roots through an unwelcoming foundation and find enough sustenance to grow and survive.  Tony asked me to remember these two trees and the difference in the soil they grew from whenever I was tempted to judge another being as weak.

We also learned Anishinaabe practices on how to build relationship and reciprocity with the land and water.  Walpole Island member Ron Sands led us on a medicine walk through the forest where we stopped to dig and harvest liquorice root.  We were asked to leave tobacco in the earth to thank the plant for sharing itself, and to harvest only part of the roots so that it could continue to live and grow.  Professor Stark talked about the responsibility of Anishinaabe-kwe (women), to care for the water and sang an Annishinaabe song to honour it.  I reflected on how the two experiences- harvesting the root and laying down tobacco in thanks, and listening to the singing of the water song- created a different, more intimate and more conscious relationship to the land and resources than what I am used to as a non-Indigenous person living in the city.

From my understanding of Anishinaabe law, its power lies in the strength of its relationships between both human and non-human beings.  This teaching was given to me most powerfully in 2012 by Carleen Elliot, an elder who lives in the Maadooki Senior’s Centre at Neyaashiinigmiing on Georgian Bay. I spent a summer living on the reserve there with my colleague Lindsay Borrows.  We visited Carleen often, and she frequently talked to us about water, and her worries that many people on the reserve were not living up to their responsibilities to care for it.  One day we heard that the band had passed a by-law making it punishable by fine for people to throw trash in the lakes, ponds, and streams.  Thinking that Carleen would be pleased, we headed over to the senior’s centre to let her know. But she only shook her head and said sadly “Laws are for the lawless.”

While I did not fully understand what Carleen meant at the time, the meaning of her words became clearer to me at the Anishinaabe Law Camp.  Professor Waboose, along with three other women from the community, led a beautiful water ceremony one evening.  The love, intimacy and care expressed towards the water was profound.  The women explained that they had been taught from the time they were little girls to care for it.  They would never carelessly pollute a pure, flowing stream, because it would be antithetical to deeply held parts of their identity and daily practices.  The internalized, practiced Anishinaabe laws around water provided a more powerful protection than any written by-law could provide.  I think that this is what Carleen meant when she told us that “Laws are for the lawless.”

I was born on traditional Anishinaabe land in Toronto to parents with English and Scottish ancestry.  I’m grateful to have attended the Camp at Walpole Island First Nation with the Windsor Law Faculty, and to have shared in the opportunity to deepen my knowledge of the Anishinaabe laws that have governed the territory for thousands of years.