Lessons from four years studying climate impacts in the Arctic 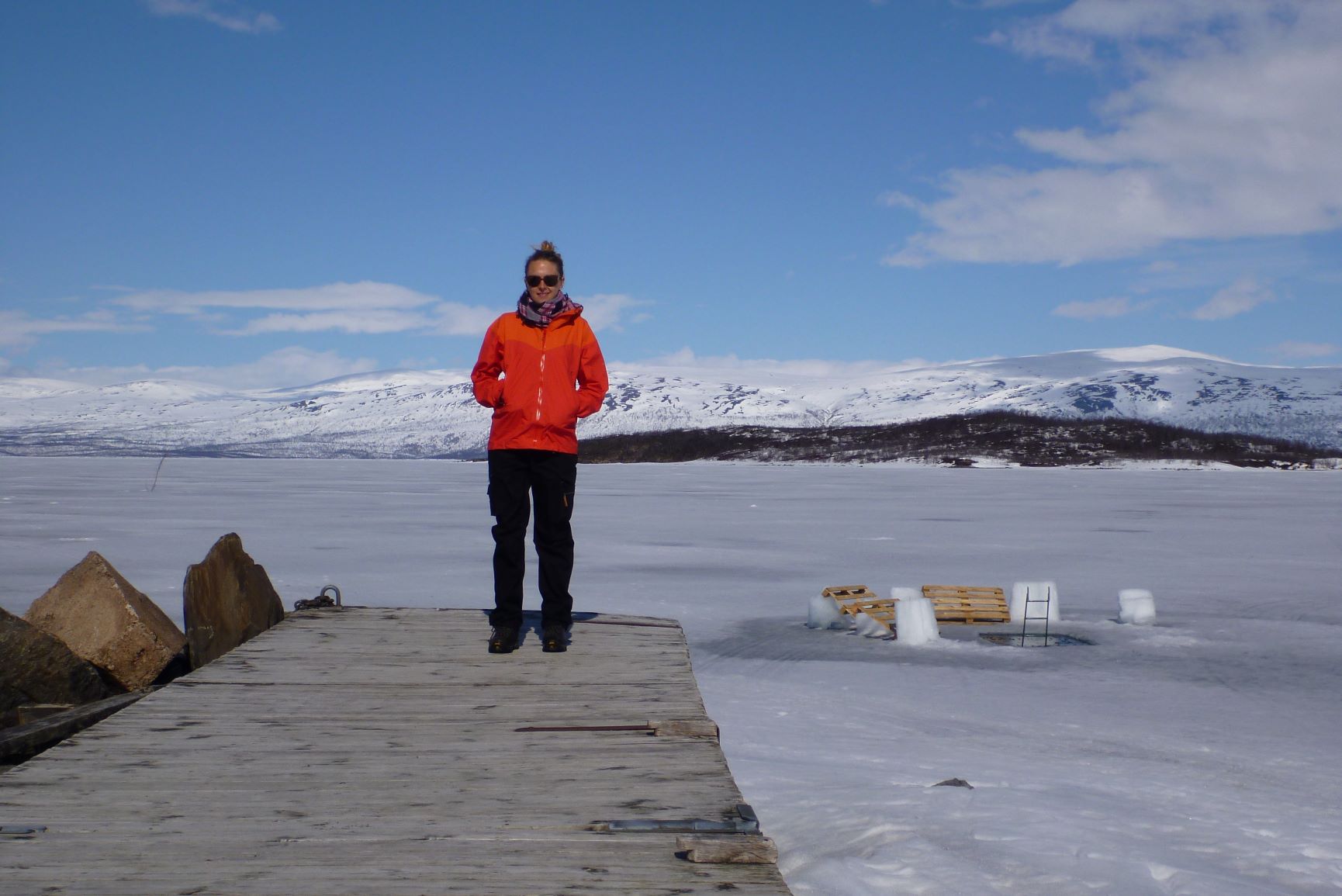 For four years, I spent winters with layers of long-underwear squeezed under my jeans, navigating the sidewalk-turned-snow-tunnels of my Montreal neighbourhood, and summers researching permafrost (permanently frozen ground) in the Swedish Arctic.

My friends questioned my rationality when I told them I’d be spending my summers measuring changes in the Arctic, as summer is obviously the best time in Montreal. My brother repeatedly inquired why I hadn’t chosen to study palm trees, or, say, sand dunes on beaches with palm trees (“You could study ANYTHING, and you choose to look at frozen dirt?”).

There are clear academic reasons to study the Arctic. It is the bellwether of climate change, with warming occurring there at twice the global average. Research in the north can be extrapolated to more southerly latitudes, as a warning of what’s to come and how quickly changes can and will happen.

However, personally it was also an attraction to remote, faraway places that drew me to the Arctic. As I learned more about the subtleties and intricacies of the north, I felt that I had made the right decision and wasn’t crazy at all. Subtleties like the light in the different seasons, in a place where there are extreme differences in season.

There is the vivid midnight sun in summer – where we could watch the sun circle around the sky, teasing the mountain tops but never dipping behind. Then as winter approaches, the sky takes on a deep, rich Marrakech blue and the sky is livened by frequent electric green Aurora borealis. 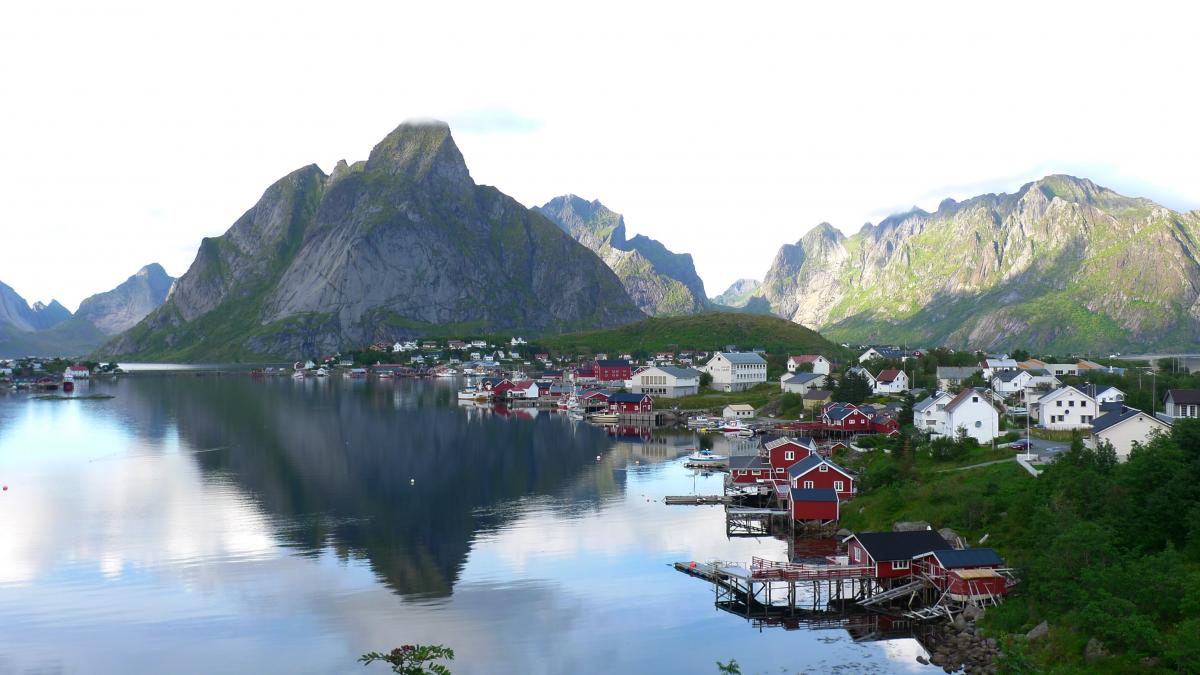 For my PhD project, I measured changes in the magnitude of carbon dioxide fluxes from a wetland that is undergoing rapid permafrost thaw. Ecosystems like the one I was studying are significant in a climate change context because they store a large amount of carbon in the soil. There is estimated to be twice as much carbon stored in permafrost environments than there is currently in the atmosphere.

In permafrost, plant matter is accumulated over many years and does not decay due to oxygen-limited, frozen conditions. These ecosystems are also inherently sensitive to changes in climate, and if it gets warm enough to thaw the permafrost, this previously inert carbon could be released into the atmosphere in the form of carbon dioxide and methane, thus causing even more warming to occur.

Where I did my field work, warming is occurring so rapidly that each field season, the positions of boardwalks that had been built on assumedly solid permafrost would shift and start tipping onto their sides. I also had to reposition and prop up equipment that was starting to collapse as the permafrost beneath thawed. 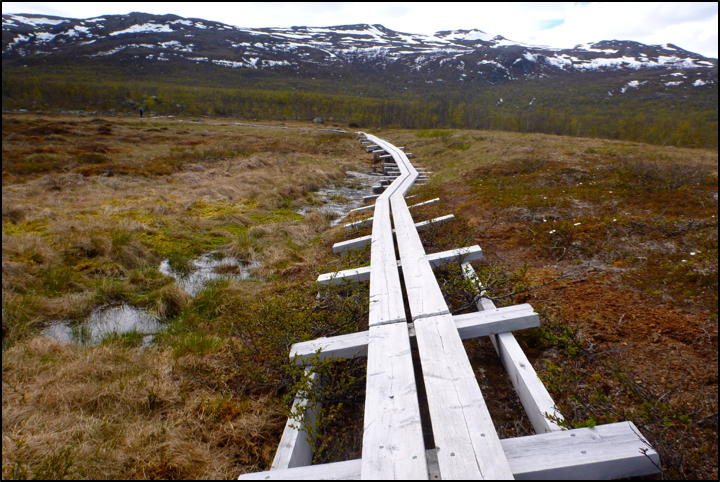 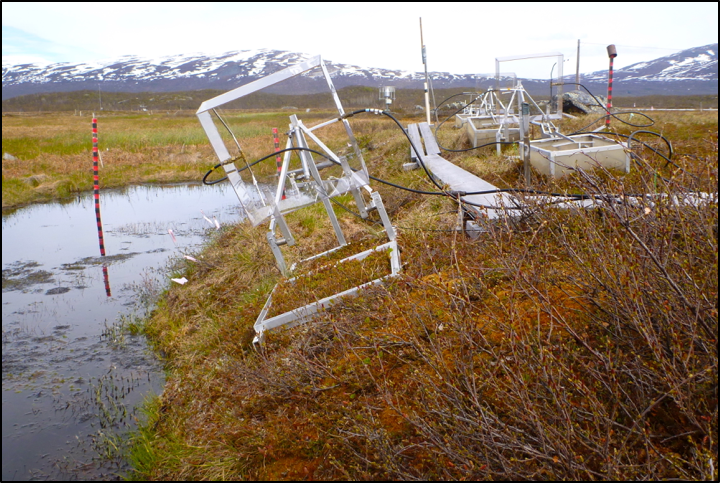 Some of my equipment on the margins of permafrost thaw.

Living in the research station

My research took place in northern Sweden near the village of Abisko.  This region was only accessible by train until 1984, when a road was built.  With the exception of a handful of Swedish scientists who live year-round in the little nearby village, international researchers who come to study this area stay in a labyrinth of a research station, managed by the Swedish Polar Research Secretariat. The research station manager’s husband kept his prize reindeer in an enclosure by their apartment that was part of the station.

Meteorological data has been collected continuously at the research station since 1913, something very unique for the Arctic where long datasets are sparse and often have wide temporal gaps. Being able to compare the current data you are collecting with reliable weather data from a hundred years ago is invaluable for scientists researching changes in the climate and the implications of these changes. 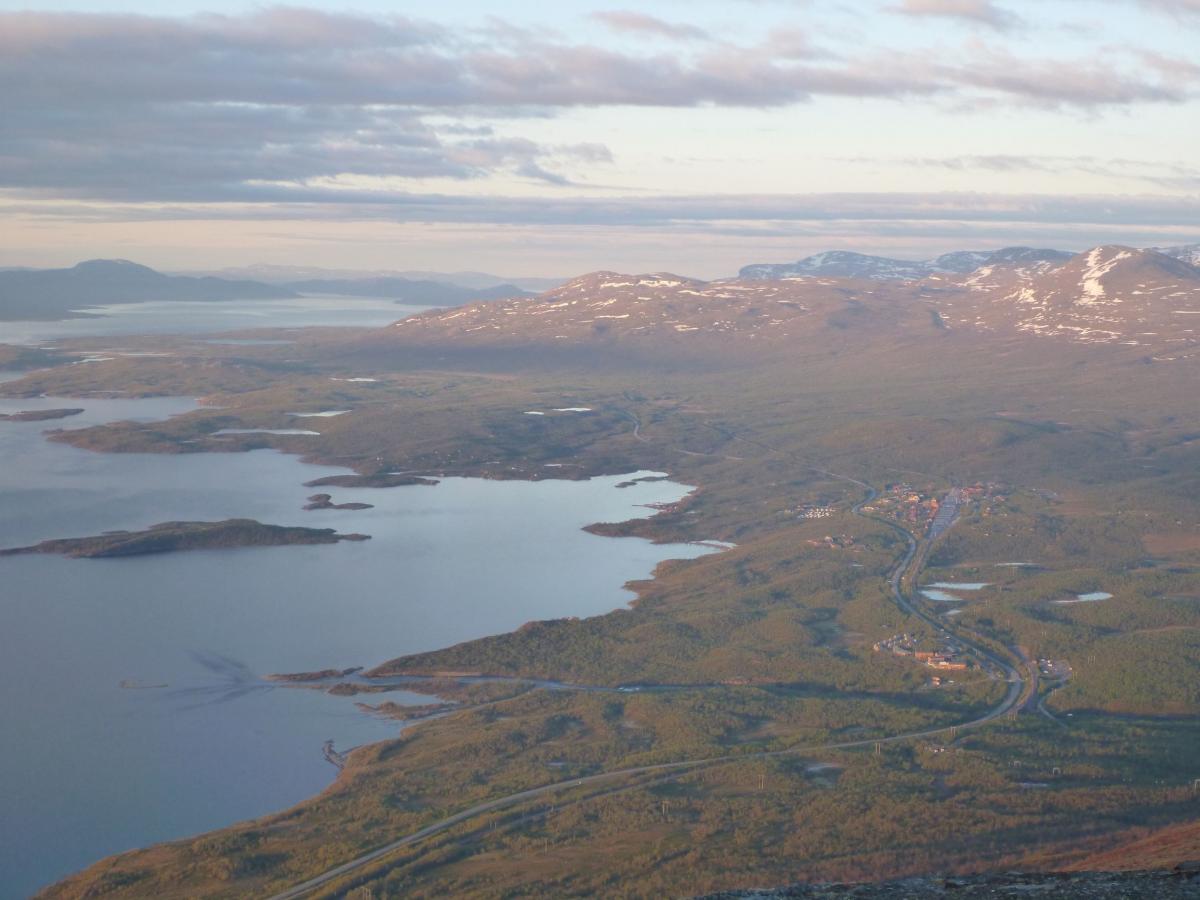 View of the research station, Lake Torneträsk and the village of Abisko.

I quickly grew accustomed to certain Swedish conventions, like the 10am fika (coffee break) where coffee as thick as the muck that stuck to my boots in the bog would be consumed, paired with delightful daily treats like cardamom rolls and saffron buns. National pastimes started to take up my free time – including foraging for wild foods like lingon berries to be made into a glossy sweet-sour sauce, gathering pale orange jewel like cloudberries for jam (to eat with stacks of Swedish pancakes), picking wild mushrooms that would be slowly dried in the oven and then turned into salty gravy or added to soups, and fishing either in the ponds adjacent to the field site or in the nearby Norwegian fjords. These freshly picked (or caught) foods made up for a dearth of vegetables at the one co-op grocery store in the village and added bright flavour to a national cuisine that appeared to me only to use dill and salt as “spice.” 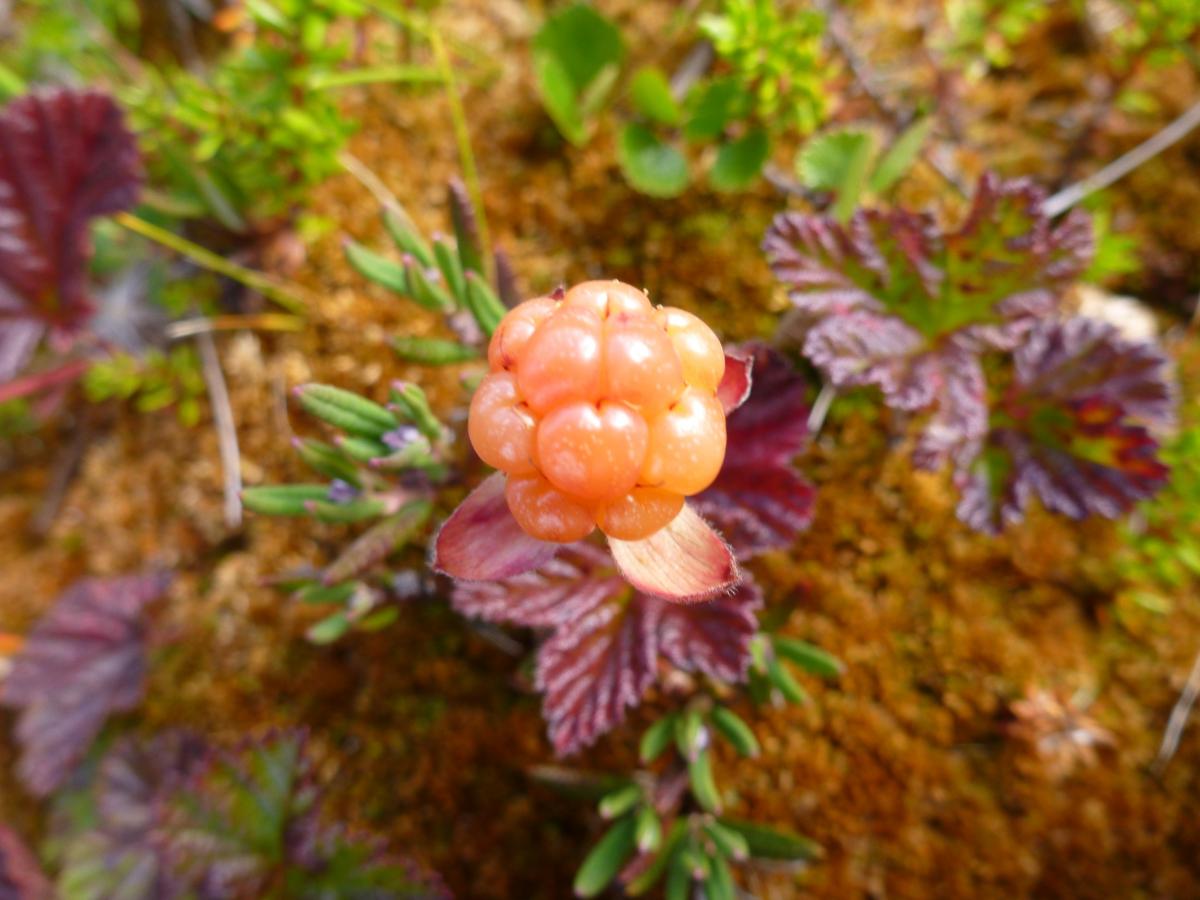 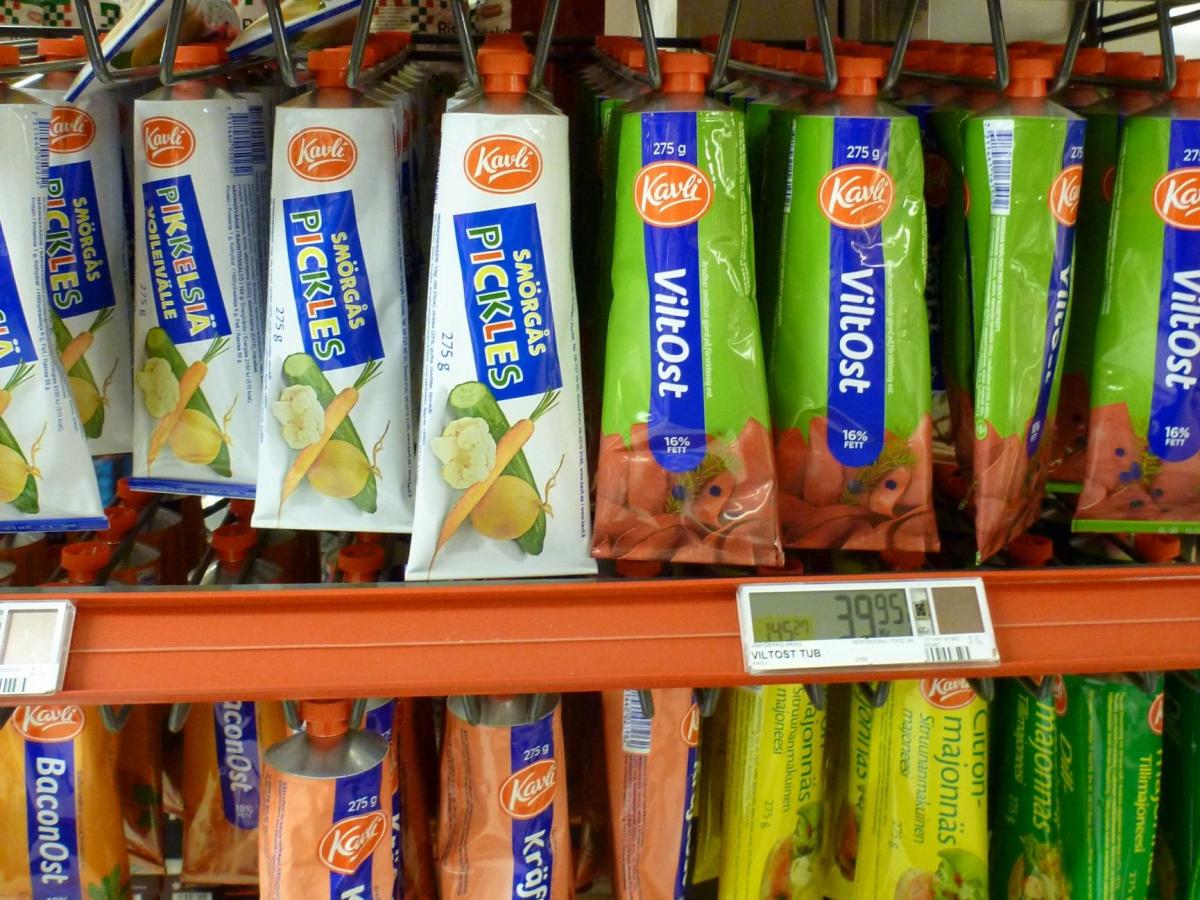 Although often the only fresh vegetable available at the grocery store was an onion, you could make a whole sandwich out of tubes!

I became good friends with a research technician who lived year-round at the field station and had fabricated his own fish smoker outside his apartment door. Although I was too squeamish to ever reel in a wriggling cod or a sei (coalfish), he taught me how to smoothly gut and filet them, after the dirty work had been done. We spent weekends exploring tiny fishing villages made up of characteristic bright red hyttes (cabins), renting boats or fishing from the shore.

Another cultural practice that I easily embraced was the sauna. I was surprised and glad to find that the research station had three saunas; two within the research station itself, and one in a separate little building by the large, often ice-covered lake (Swedes have seemed to seamlessly incorporate this Finnish tradition into their national essence).

The indoor saunas were electric, quick to heat and perfect after long days in the field. The lake sauna had a thermometer on the interior wall that would be monitored closely while logs were added to the wood stove, and until the thermometer reached at least 70°C (preferably 80°C or 90°C if participants were patient enough), we would stay warm around a small campfire on the sandy shore of the lake. When the lake was still frozen, a large hole was chopped into the thick ice to cool off our steaming bodies. When the ice had melted, we’d simply run and plunge into the Arctic water. 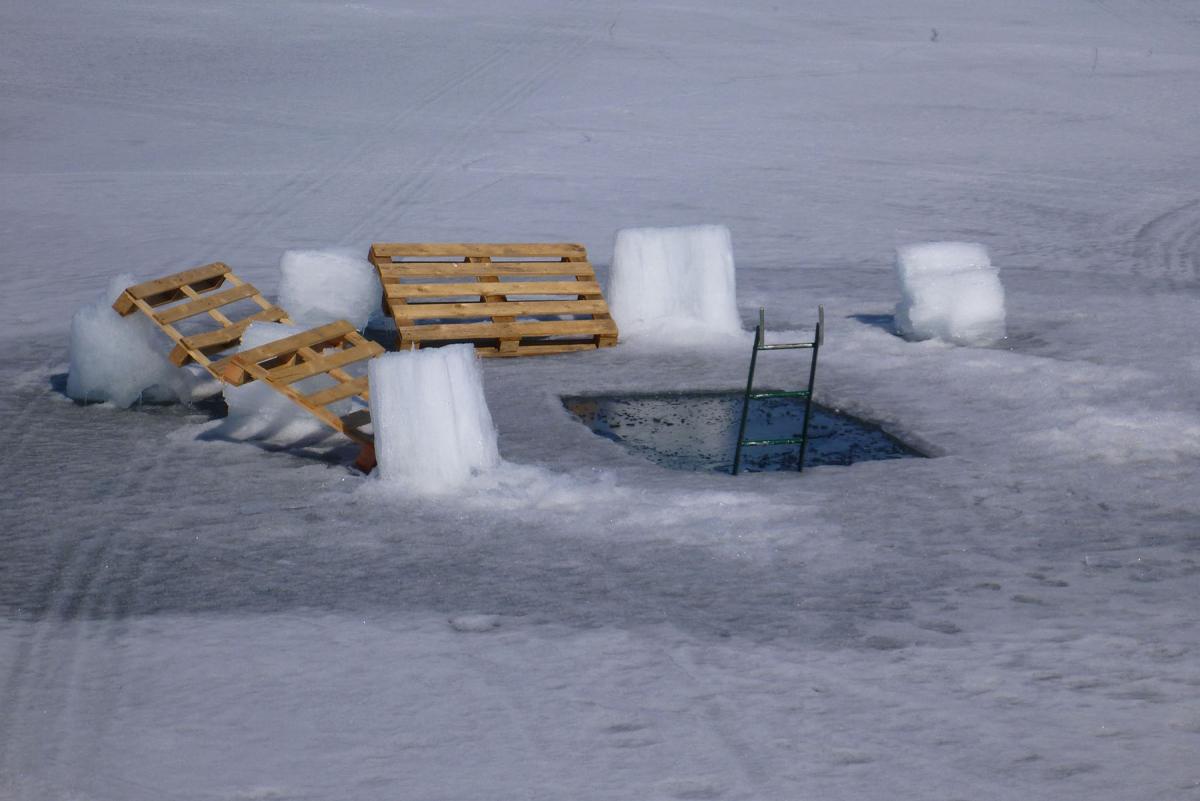 My research aimed to explain why certain areas within my field site were thawing and what the outcomes of thaw might be. For example, snow that was wind-blown and piled in certain spots insulated the edges of the permafrost mounds, causing them to be warmer in the winter and increasing the rates of thaw. I also found that although these ecosystems are quickly transitioning and thawing, they are also resilient. Even after major disturbances like permafrost thaw, species of vegetation would shift to keep ecosystems functioning, just differently.

The summer of 2016 was the first summer that I did not return to the north to do field work. I had a baby in April and also, I had collected all the data I needed to write up my thesis. Although it was gratifying to begin a new chapter in my life, I felt out of synch. Even before moving to Montreal to start my PhD, my life in BC had followed a similar rhythm: school in the winter and tree planting in the summer. I was used to stretching my legs and lungs in wild places for a few months before being re-confined to a desk.

Although many people (like my brother) would have perhaps preferred to study palm trees to permafrost, I am grateful for the chance I had to experience the midnight sun, reindeer grazing on the vegetation I was trying to measure and monitor, and icy dips into an Arctic lake.

The time I spent in the north – immersed in a place where the plants, people and animals exist on the margins of change – emphasized to me the importance of doing more to slow the climate crisis. I saw how quickly ecosystems change, and how these changes impact human communities. How, for example, the Saami people of this region were having to herd their reindeer further up the mountain slopes to give them access to reliable food, how the lake ice freezes later and melts earlier, plus the potential for positive feedback loops with more carbon in the atmosphere as permafrost thaws.

My experiences in the Arctic instilled a sense of urgency to act. That’s why I’m excited about my work as West Coast’s Climate Scientist – helping communities understand the impacts that climate change is having here in BC, and what we can do to address them.