Lessons from a summer at West Coast 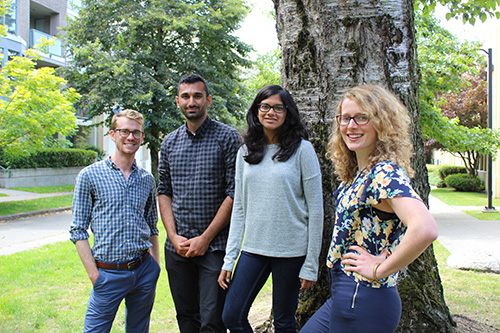 West Coast Environmental Law Association was lucky to have four talented students join us this summer from law schools across the country. As the season winds down, our summer law students share their reflections on an exciting few months learning about the ins and outs of environmental law.

I knew I would learn a lot about environmental law working at West Coast this summer. I was surprised to learn just how vast this field of law truly is. In my first week alone, I went from researching legal options for protecting BC’s coastal waters, to sifting through years of transcripts from Kinder Morgan investor calls. Over the course of the summer, my work carried me to similarly diverse corners of the law. In the last few months I have researched BC’s election advertising rules, pored through hundreds of pages of NEB reports, and compiled information on oil sands production and capacity.

The majority of my summer, however, has been occupied with West Coast’s work on marine conservation. The federal government’s recent commitment to protect at least 10% of Canada’s marine waters by 2020 has infused this work with a sense of mixed urgency and opportunity. At present, only around 1% of Canada’s waters are adequately protected, a figure that leaves Canada far behind comparable jurisdictions, like the United States and Australia. The next four years offer a unique window of opportunity to pursue the legal and political reform necessary to make up this deficit.

One highlight of my work on this file was helping West Coast lawyer Linda Nowlan testify before the Parliamentary Committee on Environment and Sustainable Development in Ottawa. Together, we prepared a brief and follow-up letter outlining our recommendations for legal changes to Canada’s marine conservation regime. Complementing this work at the federal level, my major project this summer involved researching Indigenous enforcement options for communities along the North and Central coast.

Marine conservation is an issue that traverses all levels of government, from the local to the national. Working at West Coast has allowed me to gain an understanding of this complex issue at both a local and national level, and explore its implications in both Canadian and Indigenous legal traditions.

From testifying before parliamentary committees to working with Indigenous communities to revitalize their legal traditions, the work done at West Coast embodies this kind of broad and empowering vision of the law. It has opened my eyes to what the law can be, and what it can do. I am excited to bring this perspective to my future work as a lawyer.

Thanks for an amazing summer!

It is so easy to say no. No tankers. No pipeline. No problem? Working at West Coast Environmental Law this summer allowed me to engage with environmental legal issues from competing angles and immerse myself in the diverse interests at stake inside natural resource development in BC.

Conducting legal analyses on the National Energy Board (NEB) reports on the Kinder Morgan Trans Mountain Pipeline project allowed me to track where evidence was coming from, whether it was contested and which parties’ evidence was prevailing. This is just one example of how working in environmental law is not always about saying “no” to pipelines or developing resources. By critiquing the processes and assessment reports surrounding NEB recommendations, the dialogue shifts less towards taking sides and more towards legitimizing actions being taken. Why would I want a pipeline in my province that has not fulfilled constitutional obligations to Indigenous peoples? Why should we trust a review process that has not considered the full scope of impacts to communities, First Nations and the environment in deciding such a project is in the public’s interest?

Outside of the pipeline debate, I explored how Indigenous legal principles could be incorporated into legal instruments to facilitate environmental decision-making. This included analyzing examples of Indigenous constitutions, codes of ethics, trusts and region-based management plans across jurisdictions. Through an examination of authority, board structure and decision-making capacity, I also conducted research on existing marine-based co-management regimes inside Canada.

The WCEL team brings perspective, expertise and innovative solutions to complex issues such as these. Meeting the faces driving change in Canadian environmental law and bringing Indigenous law to the forefront of these discussions has given me a dynamic professional network to carry with me far beyond my final year of law school. Thank you to the WCEL team for the opportunity to be here this summer and for the perspective you have infused into my legal career.

Working at West Coast Environmental Law this summer has given me the opportunity to work on challenging and complex legal issues with amazingly dedicated, passionate and innovative lawyers.

In an effort to help prepare and back up the recommendations that West Coast will put forward in terms of what a new environmental assessment process should look like, I examined how international jurisdictions have used sustainability assessment and strategic environmental assessment and whether or not these regimes have been successful. I also looked at a number of environmental assessment reports looking to highlight when these reports call for the need to have regional or strategic level planning. One of the most interesting things for me throughout this process was learning about the process of law reform from an NGO’s perspective, and the strategizing that goes on in deciding what exactly you want your message to the government to be and how best to present that.

As sexy as EA is, my time at West Coast also had me working on a number of other issues of high priority to Canadians – particularly pipelines and Aboriginal law. As part of West Coast’s work on pipelines and oil infrastructure, I wrote submissions to the Canadian Environmental Assessment Agency (CEAA) on the Pacific Future Energy refinery proposal as well as submissions to the Ministerial Panel appointed to consult with Canadians on the Trans Mountain expansion proposal. I also got to do some really exciting work on developing a trapper’s handbook, which explains the rights and responsibilities Indigenous trappers have and the remedies available to them under Canadian law.

I want to end by thanking the WCEL team for making this summer such a rewarding experience and for the thoughtful and purposeful perspective they bring to their work. I hope our paths cross again!

I can definitely say that this summer at West Coast Environmental Law has been unlike any other experience I could have had as a summer law student. From speaking and working with leading environmental, Aboriginal, and Indigenous lawyers on a daily basis, to collaborating with scientists, government, and other NGOs, working at WCEL has unquestionably been a unique experience.

I started off the summer working with staff counsel Gavin Smith on West Coast’s efforts to protect the coast and salmon rivers from the risk of oil spills from the proposed Enbridge Northern Gateway pipelines and tankers project. Enbridge was under pressure to meet its construction deadlines and applied to the National Energy Board for a three-year extension of its certificate. I conducted research about whether the NEB or federal Cabinet had the final say on granting the extension.

Apart from the exciting work on Northern Gateway, I also worked on a series of other projects including conducting legal research on a groundbreaking class-action lawsuit that aimed to hold large-scale greenhouse gas emitters responsible for the costs of climate change adaptation; writing a legal analysis gauging Canada’s potential compliance under the Aarhus Convention; helping to write a handbook that trappers in northern BC can use to assist in navigating the legal sphere when resource development projects disrupt their traplines; and writing a blog post outlining the legal and policy implications of a high-profile scientific article about salmon biodiversity in the Fraser River.

I would also like to share two other memorable experiences I have had this summer. The first was participating in a RELAW workshop. RELAW (Revitalizing Indigenous Law for Land, Air & Water) is a project aimed at assisting Indigenous Nations in revitalizing and applying their Indigenous law to contemporary environmental issues. At the workshop, I had the opportunity to actually learn about one particular Indigenous legal system and apply the laws to an environmental issue. In this case, the Indigenous law came in the form of a series of oral stories, and from listening to and understanding the message of each story, I developed a written summary of the legal principles that were then applied to a contemporary issue.

The other experience I had was participating in the Tsleil-Waututh Nation Water Ceremony in Burrard Inlet to bring attention to the proposed Kinder Morgan pipeline expansion. The ceremony, which took place on canoes along the tanker route to the Kinder Morgan marine terminal, was an event dedicated to ensuring the safety and protection of the inlet that has sustained the Tsleil-Waututh people for thousands of years.

Both of these experiences highlight the particularly special opportunities I had this summer and reflect the innovative and cutting-edge work being done at WCEL. From conducting legal research and writing memos to meeting with lawyers, writing blog posts, and attending workshop and ceremonies, this was certainly an exciting summer and I would highly recommend any potential law students interested in having a diverse summer experience to apply.