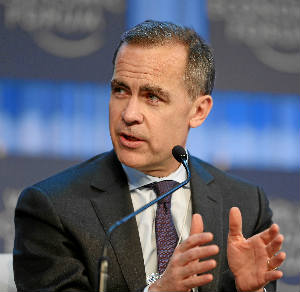 The whole speech, which Carney made September 29th, is worth a read or a watch, but what caught our attention were his comments about the likelihood of financial disruption associated with climate litigation – in particular, lawsuits “by parties who have suffered loss or damage from the effects of climate change [who] seek compensation from those they hold responsible.”

We, of course, have suggested that lawsuits by communities that have suffered harm from climate change will increasingly be brought against fossil fuel companies. We are also aware that lawsuits will be filed against local governments that fail to consider climate change in their decision-making. And we’ve spoken with professional associations about the idea that their members might be sued for poor advice on climate-related planning. But the idea that these types of litigation may ultimately have a serious economic impact on fossil fuel companies, local governments or their insurers is sometimes met with skepticism.

So with that in mind, we’d like to highlight Carney’s discussion of these types of litigation:

Claims on third-party liability insurance – in classes like public liability, directors’ and officers’ and professional indemnity - could be brought if those who have suffered losses show that insured parties have failed to mitigate risks to the climate; failed to account for the damage they cause to the environment; or failed to comply with regulations.

It would be premature to draw too close an analogy with climate risks, and it is true that court cases have, so far, largely been unsuccessful.

Cases like Arch Coal and Peabody Energy – where it is alleged that the directors of corporate pension schemes failed in their fiduciary duties by not considering financial risks driven at least in part by climate change – illustrate the potential for long-tail risks to be significant, uncertain and non-linear.

And ‘Loss and Damage’ from climate change – and what to do about it – is now formally on the agenda of the United Nations Framework Convention on Climate Change, with some talking openly about the case for compensation.

These risks will only increase as the science and evidence of climate change hardens.