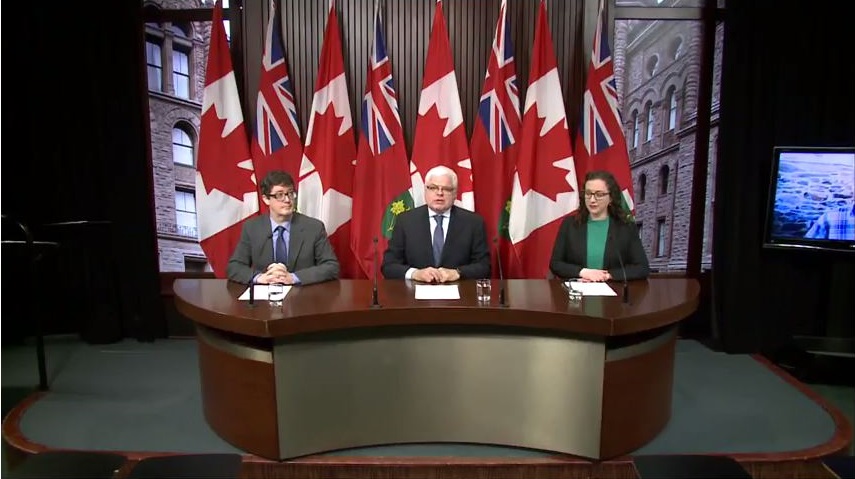 Last week (on March 26th) Mr. Peter Tabuns, the Ontario NDP’s Environment and Climate Change Critic, introduced Bill 21, the Liability for Climate-related Harms Act, 2018 into the Ontario Legislature. In doing so, he stands with the growing number of Canadians who believe the growing costs of climate change cannot be simply left to taxpayers and ordinary citizens to pay, but that the companies that have benefited from selling fossil fuels need to pay a fair share of those costs.

2 ½ years ago, at the Paris Climate Talks, West Coast Environmental Law and the Vanuatu Environmental Law Association held a press conference releasing Taking Climate Justice into our own Hands, a report that proposed that climate compensation laws – laws that make it easier to sue fossil fuel polluters – could play a major role in fighting climate change. After the press conference, Peter Tabuns, the Environment and Climate Change critic for the Ontario New Democratic Party, came up and introduced himself, and expressed interest in introducing such a law in Ontario.

A few months back, Mr. Tabuns contacted me to indicate that he was planning to introduce a bill, and inviting feedback on a draft. It has been a privilege to be able to give comments and suggestions to Mr. Tabuns, and to see the Bill introduced into the Ontario Legislature.

What the Liability for Climate Harms Act does

As the preamble to Bill 21 explains:

Climate change is real. It is already affecting Ontarians’ lives as increased wildfires and flooding create significant and costly damage. Climate change threatens to make life more expensive as people and governments are required to pay for the harm it causes and for the protection of schools, roads, hospitals and homes from unprecedented flooding and other extreme weather events.

Enhanced legal tools are required so that governments, businesses and individuals can ensure that coal, oil and gas producers contribute their fair share to paying for the harms to which their products contribute and for the necessary steps to prevent future harms.

Bill 21 is much simpler than the model legislation West Coast proposed at our Paris press conference. Where we proposed legislation that clarified how existing legal principles might apply to climate litigation, Bill 21 is in some ways bolder – simply asserting that fossil fuel producers, once their contribution to climate change is over a certain size, shall be “strictly liable” for climate-related harms occurring in Ontario.

Every corporation, partnership, trust or other entity that is engaged in the production of fossil fuels and to which a globally detectable level of greenhouse gas emissions can be attributed, as determined in the regulations, is strictly liable for climate-related harms that occur in Ontario. (s. 2)

“Strict liability” means that fossil fuel producers could be liable for the costs of climate change without proof that they acted negligently or intended to harm anyone. Given that the companies profited financially from their products and (at least from the 1950s) knew that they would cause climate change, Mr. Tabuns’ bill can be seen as an application of the polluter pays principle.

The Bill also adopts some aspects of our model Bill:

Why we need climate compensation laws

At the broadest level, climate compensation laws, like Bill 21, are needed so that global fossil fuel companies, and not just taxpayers, pay for the costs of flooding, wildfires and other harm made worse by climate change. In addition to being fiscally responsible (by ensuring that costs aren’t just passed on to taxpayers), the Bill would send a powerful economic message to an industry that still believes that it can sell products without taking cradle to grave responsibility for them. As Climate Scientist Dr. James Hansen said at the press conference at which Peter Tabuns announced the Bill:

Actual [reductions] of carbon emissions and justice for young people will only occur when fossil fuel companies must pay for costs of climate change so that they have the incentive to become clean energy companies.

We have applauded Bill 21 and called on the BC government to consider similar legislation.

So why are Bill 21 and other climate compensation laws so important if lawsuits are already possible?

It is important to understand that Bill 21 is a private members bill introduced by an opposition Member of Provincial Parliament. What this means is that Peter Tabuns’ bill, in its current form, is unlikely to pass and become law. However, by forcing the Ontario Legislature to debate the Bill, Tabuns is putting front and center the question of who will pay for climate change, and forcing all the parties in the Legislature to confront that issue.

And he’s provided a model for legislators elsewhere who might be looking for new approaches to climate leadership.

Fossil fuel companies and their investors know that Bill 21 will (most likely) not pass. But they also should know that as the costs of climate change rises, that there will be growing demands for this type of law in more and more places. Corporate lawyers have taken notice, writing:

[T]he introduction of Bill 21 reflects a bellwether for future efforts by government to impose liability for climate change-related harms on companies engaged in fossil fuel production. For companies involved in oil and gas production in Canada, this bill reinforces the importance of taking adequate steps to plan and prepare for future climate change litigation.

Where will the next Climate Compensation Act be proposed? And where and when will the first one be passed?