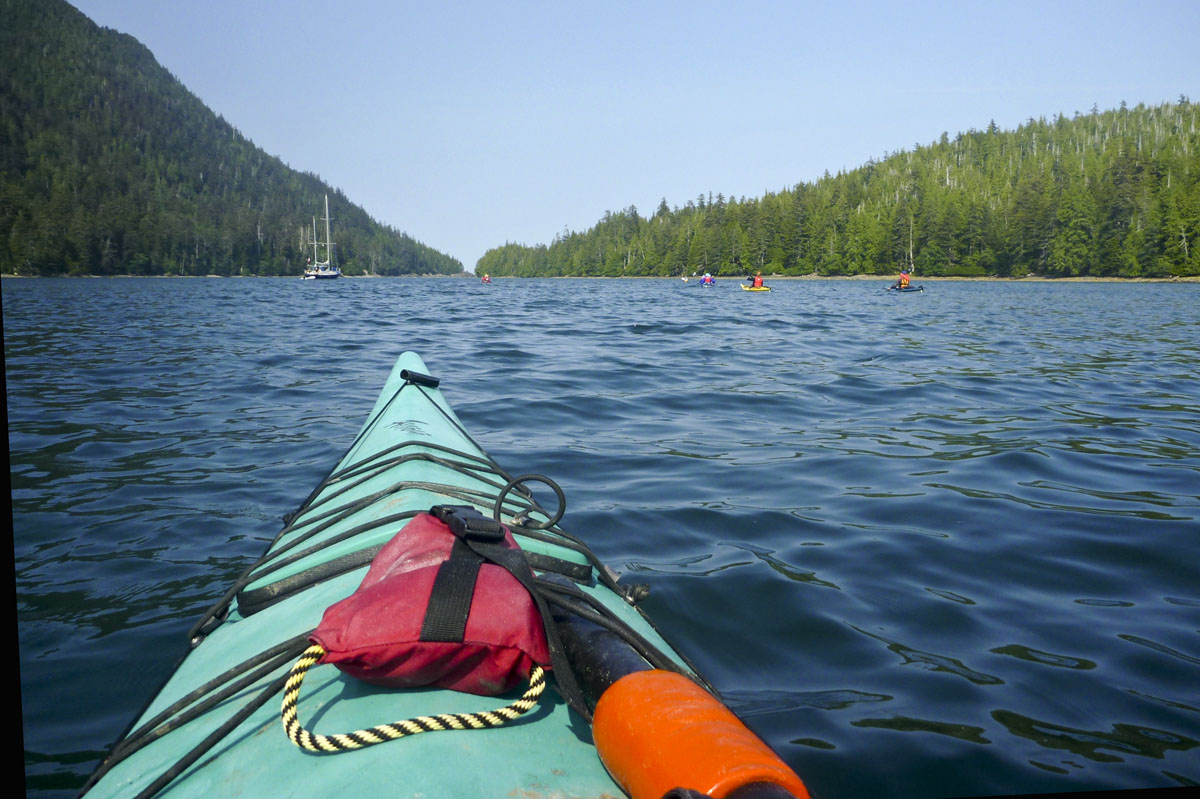 Marine protected areas (MPAs) come in many shapes and sizes, and are created under a welter of different laws. As the federal government makes headlines for surpassing its goal of protecting 10 percent of marine areas by 2020, we’re profiling one of the key legal tools used to get there, as well as some of the marine areas it has been used to protect. 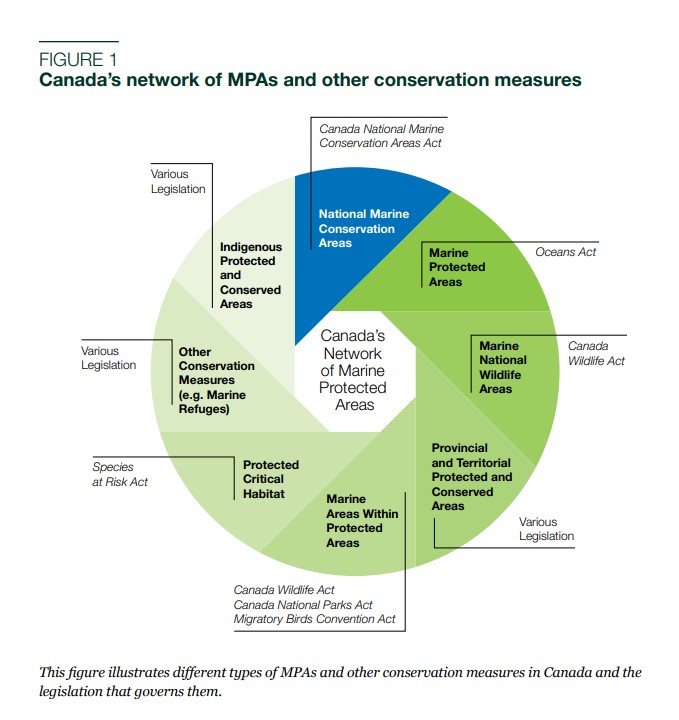 This post focuses on the Canada National Marine Conservation Areas Act (CNMCA Act), one of three main federal MPA laws, together with the Oceans Act and the Canada Wildlife Act. The CNMCA Act authorizes the federal government to create national marine conservation areas and reserves (NMCAs), which are MPAs designed to protect the country’s marine heritage.

Over twenty years ago, Parks Canada looked across the country’s vast ocean areas and identified 29 marine areas on all three coasts and in the Great Lakes, and made a plan to represent each of these areas with at least one NMCA. The agency does not have a timeline for completing their plan: so far six marine regions are represented by NMCAs.

Even though Parks Canada is in charge, NMCAs are not like other parks, due to their emphasis on human use. National parks are intended to “protect ecosystems in a state essentially unaltered by human activity,” while the purpose of NMCAs is to “protect and conserve representative marine areas for the benefit, education and enjoyment of the people of Canada and the world.”

NMCAs must be managed and used according to the international legal principle of intergenerational equity. This means meeting the needs of present and future generations without compromising the structure and function of the ecosystems, including submerged lands and the water column.

Like all MPAs, the quality of protection matters. The CNMCA Act is unique among Canada’s federal MPA laws by specifically prohibiting:

Bottom trawling – a particularly destructive fishing method – can now be added to that list of prohibitions, as a recent government policy announcement states that new protection standards will apply to all future federal MPAs, including NMCAs. We believe these prohibitions will be more durable if they are directly inserted into all federal MPA laws.

Zones are a feature of many MPAs. The CNMCA Act requires every NMCA to be divided into zones. One zone must fully protect special features or sensitive elements of ecosystems, akin to a ‘no-take’ requirement, a welcome feature not matched in any other federal MPA law. One zone must foster and encourage ecologically sustainable use of marine resources. Other than these legal requirements, neither the Act nor any related regulation or policy currently gives any guidance on the total number of zones that can be used, or how much of the protected area must be in protective vs. sustainable use zones.

The Act’s mention of “ecologically sustainable use” has been particularly challenging. In a 2012 audit, Canada’s Environment Commissioner criticized Parks Canada for lacking practical guidance on how to assess and implement the concept.

This year the agency responded and consulted on proposals to modernize NMCA policy. Parks Canada proposes to: clarify and standardize NMCA zoning with four defined types of zones; require most of the area of an NMCA to be covered by protective zones; and develop new permitting procedures for sustainable land and submerged land use.

Parks Canada’s grand plan of achieving an NMCA in all 29 of Canada’s marine regions is underway. There are now five complete NMCAs, including two that are primarily freshwater: Fathom Five National Marine Park, and Lake Superior National Marine Conservation Area. Quebec’s Saguenay-St.Lawrence Marine Park was created under a separate federal law, and is also counted as an NMCA.

The Gwaii Haanas NMCA Reserve and Haida Heritage Site on the north Pacific coast is the biggest current NMCA. The Gwaii Haanas Gina 'Waadluxan KilGulGa Land-Sea-People plan sets strategic direction for the management and operation of Gwaii Haanas from mountaintop to seafloor.

West Coast was pleased to contribute to the development of this plan with many others, and applauded the plan’s explicit recognition of Haida law. To take just one example, one zone in this NMCA recognizes a Haida origin site: the Tang.Gwan Giisda Kaadlljuu (Coming Out of the Ocean First) zone includes Xaagyah Gwaay.yaay (Bolkus Island), a Haida origin site where the Haida supernatural being SGuuluu Jaad (Foam Woman) first came out of the water. See here for Indigenous rights lawyer Terri-Lynn Williams-Davidson’s performance of the song The Story of sGuuluu Jaad, Foam Woman.

Both Gwaii Haanas and another federal Oceans Act MPA in Haida Gwaii were first designated as Haida Heritage Sites under Haida law. SGaan Kinghlas-Bowie Seamount MPA is said to be the home of a Haida supernatural being known as SGaan Kinghlas, or “supernatural being looking outwards.” Its new MPA management plan was finally competed and celebrated in July 2019 and can be read here. The Haida Constitution holds the living Haida generation responsible for ensuring that natural and cultural heritage is passed on to following generations.

More to come: Talluritup Imanga in Nunavut and the inland ocean of James Bay

Three more NMCAs have been proposed. Two have been in the works for some time: Îles de la Madeleine in Quebec, and the Southern Strait of Georgia in the busy Salish Sea.

Talluritup Imanga in Nunavut now has the honour of being Canada’s next, almost completed, NMCA. After twenty years of development, this Inuit-led area is bigger and bolder than originally conceived. Full of seal, beluga, walrus, polar bears, and migrating birds, it will overtake Gwaii Haanas as Canada’s largest NMCA, once designation is finally complete.

The IIBA will be used to set up both a joint Inuit-government cooperative management board, known as the Aulattiqatigiit Board, and an Inuit Stewardship program managed by the Qikiqtani Inuit Association in five communities: Grise Fiord, Resolute Bay, Arctic Bay, Pond Inlet and Clyde River (the community that took on the National Energy Board in precedent-setting litigation and won).

A marine area in James Bay is the most recent candidate NMCA site. It consists of more than a thousand small islands in the Eeyou Marine region. No federal MPAs currently exist in James Bay. This NMCA will be managed by the Cree nation, says Bill Namagoose, executive director of the Cree Nation Government: "If there is to be a park on the islands, it will not be a Parks Canada park. It will be a Cree park and managed by Crees."

Parks Canada is in the process of revising its policy for NMCAs and recently conducted a public consultation based on:

West Coast endorsed a joint submission on the NMCA consultation prepared by a number of conservation groups under our SeaBlue coalition. Read the submission here.

In the months and years ahead, Parks Canada will continue on its mission to complete the NMCA system. West Coast will participate in the development of stronger and more comprehensive regulations to govern NMCAs. The recent NMCA announcements and consultations bode well for protecting more “natural, self-regulating marine ecosystems” across the country, as the CNMCA Act intends.