Speak up – loud – on climate change during Election 2019 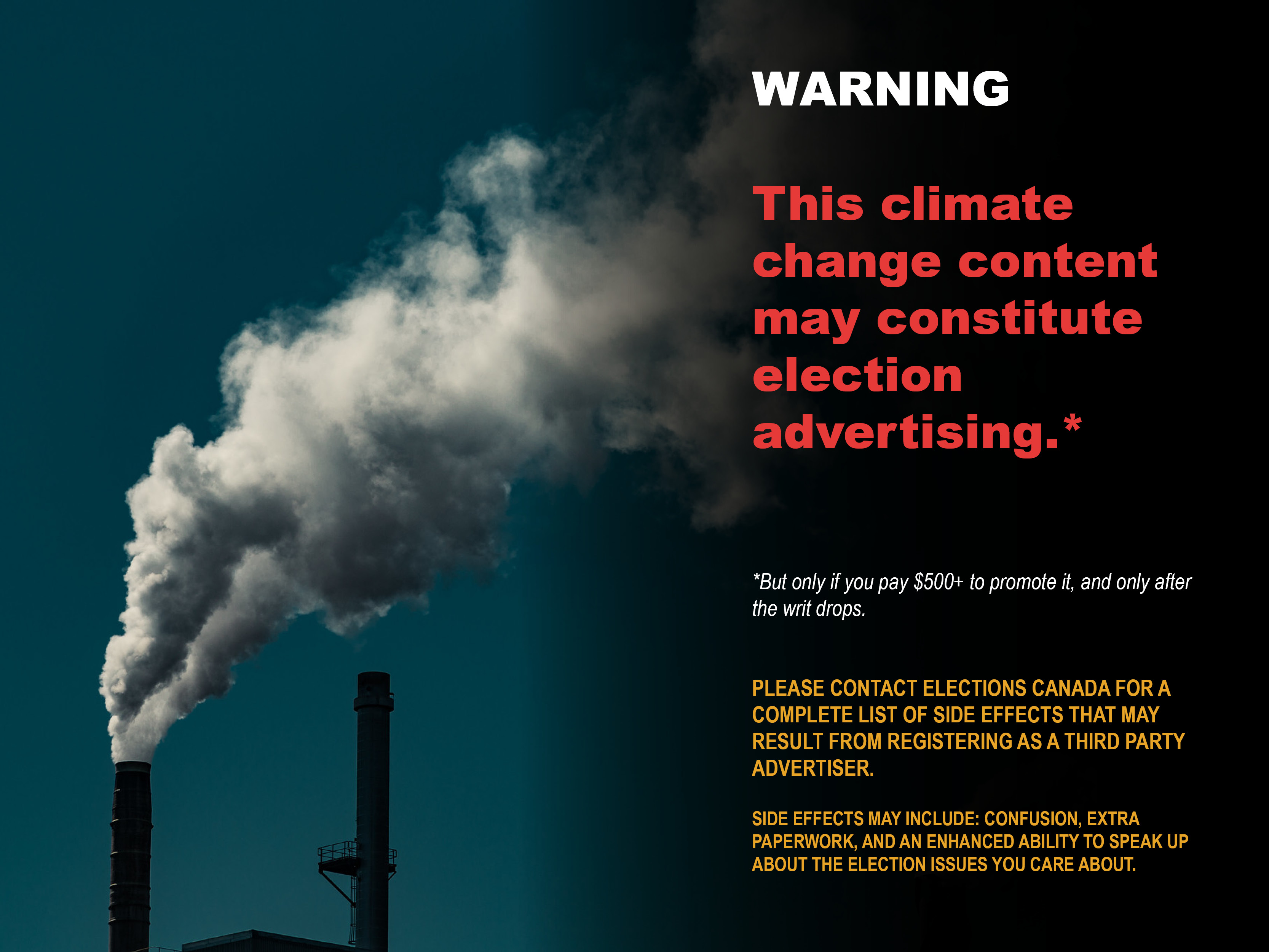 It sounded like something out of Orwell’s 1984: the Canadian media reported that Elections Canada had indicated that charities and non-profits who speak out about climate change could be considered “partisan.”

Not surprisingly, we’ve received a number of calls from allies and media looking for clarification. And we’re pleased to report that Canadians can – and must – continue to speak out loud and clear about climate change at this critical time. Reports that they might be considered partisan for doing so have been greatly exaggerated.

So what was Elections Canada talking about?

For some years Canada’s election laws have placed restrictions on election advertising. These rules require companies, non-profits, unions and others who spend a relatively significant amount on advertising during an election period to register, and they limit the amount that they can spend. This is regarded by many of us as a good thing – it means that one deep-pocketed corporation cannot funnel massive amounts of money into skewing the election debate.

But it raises the question of what counts as election advertising, and the Canada Elections Act provides a pretty broad definition (intended to prevent advertisers from finding a loophole). According to the definition under the Act:

How is election advertising regulated?

A corporation, non-profit, charity, union or individual that spends more than $500 on spreading a message related to climate change during the election writ period (which will start when the election is announced) may need to register with Elections Canada if climate change becomes an election issue, in the sense that parties or candidates take positions on it.

However, if Elections Canada staff suggested, as the original media stories reported, that talking about climate science would be considered “partisan” even without referencing a party or individual candidate by name, this is not legally accurate.

Other rules in the Elections Act regulate “partisan advertising” – which refers to the transmission of an advertising message that explicitly promotes or opposes a party or candidate, “otherwise than by taking a position on an issue with which any such party or person is associated.”

So it is clear that statements about climate science, the urgency of climate change or what policies/laws will help deal with climate change would not be partisan (unless of course they were followed by something like: “…so you should vote for/not vote for X party or candidate”).

Elections Canada, since the original stories, has clarified in the media that “the climate-change warning was just an example of an ad that could fall into the ‘election advertising’ category,” rather than an example of partisan advertising. More recently the CEO of Elections Canada issued a statement clarifying that: "The [Canada Elections] Act does not prevent individuals or groups from talking about issues or publishing information."

This is an unfortunate miscommunication, since partisan advertising raises different legal requirements than what Elections Canada calls “issue-based” election advertising. It is understandable that many Canadians were concerned.

First of all, those undertaking partisan activities should already have registered if they’ve spent more than $500 in the “pre-election period” which started June 30th.

Second, the law prohibits charities from engaging in partisan communications, making those organizations highly sensitive about being labelled partisan. Several articles referred to charities that were worried about the relationship between their obligations as a charity and Election Canada’s alleged ruling that climate science was partisan. Fortunately, the Canada Revenue Agency has confirmed that a charity may continue talking about issues even if they become “associated” with a political party or candidate:

A charity may carry out [public policy dialogue and development activities] that support or oppose a law, policy, or decision of government that a political party or candidate also supports or opposes. A charity can do this at any time, inside or outside of an election period, as long as in doing so the charity does not refer to or otherwise identify the political party or candidate.

While charities should certainly avoid any actions or communications that might be taken as endorsing or opposing a particular party, charities may 100% talk about climate change and the need for climate action.

There is no doubt that some community groups may be intimidated, during the election period, by having to register with Elections Canada, but the requirements need not be a huge barrier. Registered third party advertisers need to submit a registration form and have a separate bank account, a fiscal agent and (if it’s a corporation) a resolution from its board. In addition, if more than $10,000 is spent on advertising, an auditor must be appointed, and importantly, no international donations may be used for election advertising (see p. 18 of the Elections Canada Handbook).

Anyone spending more than $500 on getting their word out during the election period – for example, through paid ads or boosted social media content – will need to be aware of these legal requirements. But most people and organizations won’t need to worry.

Elections Canada materials also make it clear that the focus in calculating this $500 is on the actual costs incurred. Design and printing costs associated with a flyer might be counted, for example, but not volunteer time in distributing them. Also, communication to an organization’s membership, the distribution of an editorial or news item, and certain other communications don’t count as regulated activities. In particular, Elections Canada guidance emphasizes that the following are not election advertising during the election period, regardless of content:

West Coast Environmental Law is likely to register, not necessarily because we think that we will cross that $500 threshold, but just so we don’t need to worry if we do. However, many climate communications strategies during the election period will not require registration.

We hope the question of how to address the climate crisis will be a central issue in the election campaign. Should we adopt a carbon tax? Should Canada reduce its greenhouse gases more or less rapidly? Are pipelines inconsistent with climate leadership? Can our approach to reducing our fossil fuel pollution deficit be as rigorous as our approach to reducing our financial deficit? How are Canadians going to pay for the huge costs of climate change?

These issues either are or could become “associated with a political party or candidate.” We want to see vigorous debate on all of these issues, with the parties competing to take responsibility for quickly transitioning Canada towards a sustainable economy. As a public interest organization dedicated to protecting the environment through law, we will continue to advocate for strong climate policy during the election period and will register if necessary.

There is something galling to those of us have seen climate science restricted by government decree, to see the suggestion that the reality of climate change is a “partisan issue” simply because a party has decided there are political points to be gained by reaching out to climate deniers. To be clear, it is not partisan under Canada’s election rules.

While we would argue that the Canada Elections Act provisions on advertising are intended to deal with public policy issues – rather than debates about basic claims about reality – it appears that Elections Canada disagrees. The CEO’s statement emphasizes that for the purposes of regulating non-partisan election advertising, “no matter how obvious it may appear" Elections Canada will not “make a distinction between facts and opinion.”

This raises interesting questions, such as:

Like the vast majority of Canadians and political parties, we accept the scientific consensus on climate change and are looking for real climate action from parties and politicians of all stripes. Elections Canada may not be willing to make the distinction between facts and opinions, but Canadians will consider those distinctions when they head to the polls.

There are pros and cons to the Canada Elections Act third party advertising provisions, and different people can disagree about whether and how statements made during elections should be regulated, if at all.

However, it is clear that Canadians – and their organizations – must keep insisting that climate change is not a partisan issue and that all parties must put forward plans that will protect Canadians and our atmosphere from global warming. It is absolutely essential that climate change, and how to address it, be a major issue in the coming election. We intend to be part of this debate in a non-partisan fashion, and so should you.