News & Events » Environmental Law Alert Blog » Standing up for families, community health and safety in Beaver Creek
Back to top

Standing up for families, community health and safety in Beaver Creek 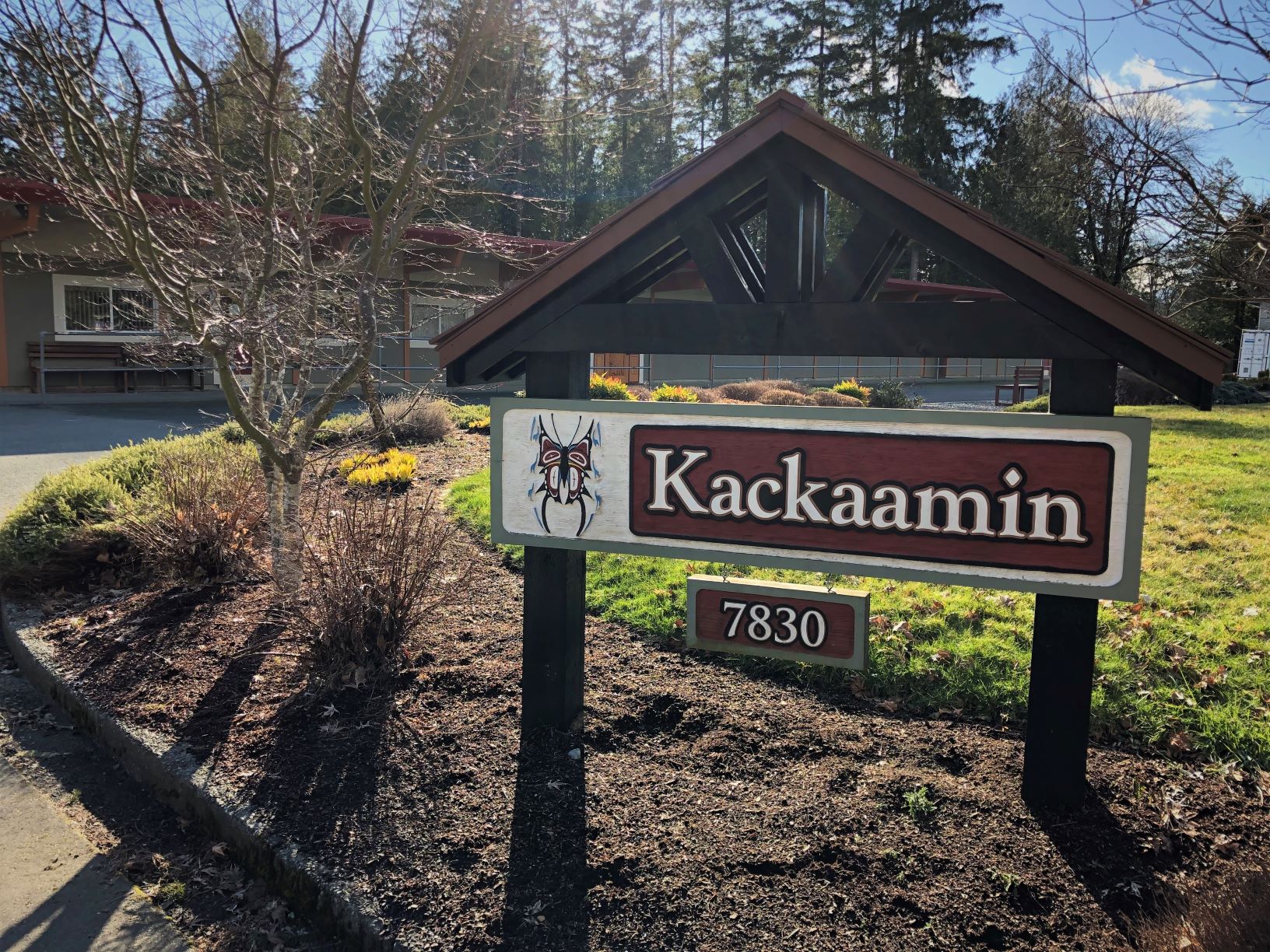 Tucked away on a quiet road outside of Port Alberni, in the small Vancouver Island community of Beaver Creek, lies a unique, Indigenous-led facility focused on helping individuals and families heal from trauma and addictions. The Kackaamin Family Development Centre – pronounced “cots-common” – has developed a reputation across BC and beyond as one of the only recovery programs in the province with a holistic approach that focuses not just on adults, but on children, youth and families.

Unfortunately, this peaceful family healing centre and its neighbours in Beaver Creek are facing the development of a large industrial cannabis plant across the street.

Since the Premium Cannabis Meds BC operation was first proposed in 2017, Kackaamin staff and local residents have raised the alarm about the potential impacts of the marijuana facility. They are especially concerned about the smell associated with the development, which presents an active setback for Kackaamin clients dealing with addictions, and could undermine the organization’s work to support reconciliation and help Indigenous families heal.

In addition, residents have shared concerns about air and water pollution, impacts on wetland habitat, and increased traffic, as well as the use of farmland within the Agricultural Land Reserve. Concerned community members have urged the company and regulators to reconsider the location and develop the facility elsewhere.

However, despite the overwhelming local opposition, decision-makers at multiple levels of government have failed to respond to community members’ concerns. Permits for the facility have been approved by local and provincial authorities, and the company is awaiting its final licence from Health Canada.

West Coast Environmental Law is supporting Kackaamin and Beaver Creek residents in their efforts to stop the cannabis plant and protect the community from the associated impacts, through our Environmental Dispute Resolution Fund. As construction of the cannabis facility moves forward, community members and advocates are shining a light on the harm this new development would cause in Beaver Creek, particularly for the Indigenous families who rely on Kackaamin as a safe, healthy place to heal.

The Kackaamin Family Development Centre has a long history of supporting families on the west coast. With deep roots in Nuu-chah-nulth territories on Vancouver Island, the organization was founded as a “safe haven” for families and individuals who have been negatively impacted by colonialism and residential school experiences.

Today, Kackaamin continues to change the lives of many families from BC and across Canada, using a unique, trauma-informed approach that braids Western neuroscience with Indigenous ways of knowing and healing.

“It’s based on our holistic view of everything – our value system, our oneness with everything,” says Lisa Charleson-Robinson, Executive Director of Kackaamin. “You can’t treat a problem by just going about it with one person. If there’s an issue in the family, everybody usually gets involved or is affected by it.”

Kackaamin is one of only three centres in Canada that specializes in family-focused recovery programs. With an onsite school, licensed daycare, and cultural programs, it is a special place where people can deepen connections with their loved ones while working to overcome their pain and addictions.

Now that we’ve uncovered the horrors of residential schools, and what happened to our parents and grandparents, we’re starting to really make those connections between what happened, and what’s happening with our young people. And we’re helping them to understand it, and heal from the traumas they’ve endured as a result of that breakdown of our community and family systems. We’re helping them to heal from that so they can raise healthy young children, so that we can have strong families and nations again.

During the pandemic, in a particularly difficult year, Lisa says that the phones at Kackaamin have been ringing off the hook with many families desperately seeking their services. While the staff struggle to keep up with demand and continue caring for their clients, the impending construction of a major pot growing facility in the neighbourhood is the last thing they want to contend with.

How will the cannabis facility impact Kackaamin and the community?

Residents in Beaver Creek have been concerned about a range of different possible environmental impacts from the cannabis growing facility. But for Lisa and other staff at Kackaamin, the most pressing concern is the potential smell, which could act as a trigger for clients dealing with addictions.

Lisa is particularly worried about the impacts on children and youth:

I can’t imagine kids coming out of their learning centres, toddlers or babies smelling that stuff. They’re supposed to be in a safe place, and many of their parents may have been addicted to that. So even just the smell of it is going to trigger some kind of response from the kids. How do we make them understand that they’re actually safe here? Can they even play outside?

The experiences of those nearby other industrial pot facilities strongly suggest that there are problems with excessive lighting and odour emanating from these operations.

Lisa explains that it all boils down to safety. When families come to Kackaamin, their healing journey involves “opening up” and addressing very difficult issues, which means that the staff must work hard to establish a deeper level of safety for individuals and their loved ones.

The development of an industrial cannabis operation so close by presents a very obvious challenge in maintaining this safe space. The 57,000-sq.ft. facility is located about 140 metres away from the Kackaamin centre’s daycare – and yet, Kackaamin was not consulted in the initial planning for the cannabis facility, and their concerns about the development have repeatedly been dismissed.

While Kackaamin is not opposed to cannabis growing in general (and they acknowledge the benefits medicinal marijuana can provide for many people), the location of this particular facility is simply unacceptable. As local residents have noted, there are a number of alternative sites available in the region for growing operations, and these facilities would be better suited to an industrial zone rather than a quiet residential area.

In addition to the fears about odours, Beaver Creek residents have raised a number of questions about how the cannabis growing facility will affect the local environment.

The Premium Cannabis Meds property is over 70% wetland, located in an environmentally sensitive area containing fish-bearing creeks and streams with sensitive riparian ecosystems. Residents have expressed concerns about the potential impacts for migrating birds, salmon spawning areas and the destruction of habitat for the endangered painted turtle. In addition, the community’s high water table makes the area prone to flooding.

Air quality and pollution are also substantial concerns for community members, who note that the unique environment in Port Alberni amplifies these risks. According to a BC Government report on the region’s air quality, “the mountainous terrain around Port Alberni inhibits air circulation which can reduce the ability of the atmosphere to disperse pollutants.”

Other concerns include the possibility of water pollution, light pollution, industrial noise and fire risks.

New rules regarding cannabis and the Agricultural Land Reserve

The Beaver Creek property where the facility is located is part of the Agricultural Land Reserve (ALR) – which is intended to protect valuable farmland across BC. The low cost of land in the ALR compared to industrial zoned land can be attractive to the cannabis industry, which has forced BC’s Agricultural Land Commission (ALC) to grapple with the question of how these operations fit in with the ALR’s objectives.

In July 2018 – while Premium Cannabis Meds BC was in the process of obtaining a building permit from the Alberni-Clayoquot Regional District (ACRD) – the ALC announced new rules to restrict the construction of cement-based, industrial cannabis production facilities on ALR lands. The company then had to apply to the ACRD for a non-farm use exemption to build its cement-based structure on the property.

The ALC emphasizes that local governments play an important role in deciding what kinds of cannabis production occur in their community. With support from the EDRF, Kackaamin and Beaver Creek community members worked with lawyer Patrick Canning to conduct legal research and submit a number of letters to the ACRD Board of Directors outlining why and how they should exercise their jurisdiction to protect the neighbourhood from the impacts associated with the facility. Unfortunately, the community’s concerns have still not been addressed.

In addition to the residents’ legal efforts, an environmental assessment commissioned by the developer and submitted to the ACRD highlighted water-related risks and recommended that the facility would likely be “better suited to non-ALR zoned lands, such as a Light Industrial zone.” (p. 231) Even the ACRD’s own Agricultural Advisory Committee recommended that the Board deny the non-farm use application. (p. 192)

The ACRD had an opportunity – and the authority – to reject the application for a non-farm use exemption. But instead, they decided to refer the decision to the ALC, which approved the application in January 2020.

The role of environmental racism

The fact that this facility has been permitted to go ahead despite very legitimate concerns over the proximity to an Indigenous-led recovery centre has led to questions about the role of systemic racism in the decision-making process. If a similar cannabis facility were proposed adjacent to a non-Indigenous family healing centre, would it have been approved?

(As it happens, there was another large cannabis operation proposed in the Alberni Valley region near Sproat Lake, but it was cancelled in late 2019 due to community opposition.)

The term environmental racism refers to the racial discrimination reflected in environmental policies, the enforcement of laws and regulations, as well as the targeting of Indigenous, Black and communities of colour as sites for harmful development, the sanctioning of pollution, and exclusion of those communities from leadership and decision-making. For Lisa, looking at Kackaamin’s experience through this lens has been discouraging, but sadly, it’s not unfamiliar.

“That’s always been the way with First Nations, like we don’t matter, you know? That’s how I felt. I think that’s what hurt me the most, is that it felt like nobody cared. It was like, just – go ahead, they don’t matter,” she says.

The problem is particularly striking given the important work that Lisa and her colleagues at Kackaamin are doing to support Indigenous families in healing from the trauma caused by Canada’s colonial history.

As elected leaders emphasize their commitments to reconciliation, upholding the United Nations Declaration of Indigenous Peoples (UNDRIP), and implementing the Truth and Reconciliation Commission (TRC)'s Calls to Action, Canadian governments must ensure that these commitments are reflected in decision-making on the ground – and licensing for industrial cannabis production is no exception.

Kackaamin and Beaver Creek residents have taken their concerns about the cannabis facility to elected officials at all levels of government – from the Alberni-Clayoquot Regional District Board to the House of Commons.

After disappointing decisions at the local and provincial level, they turned to Courtenay-Alberni MP Gord Johns, who presented a petition in Parliament last month calling for the review and cancellation of all Health Canada cannabis licences and applications in the Beaver Creek community.

How you can help

In addition to signing (and sharing) the Parliamentary petition, you can support Kackaamin and the Beaver Creek community in their legal efforts by contributing to their GoFundMe campaign.