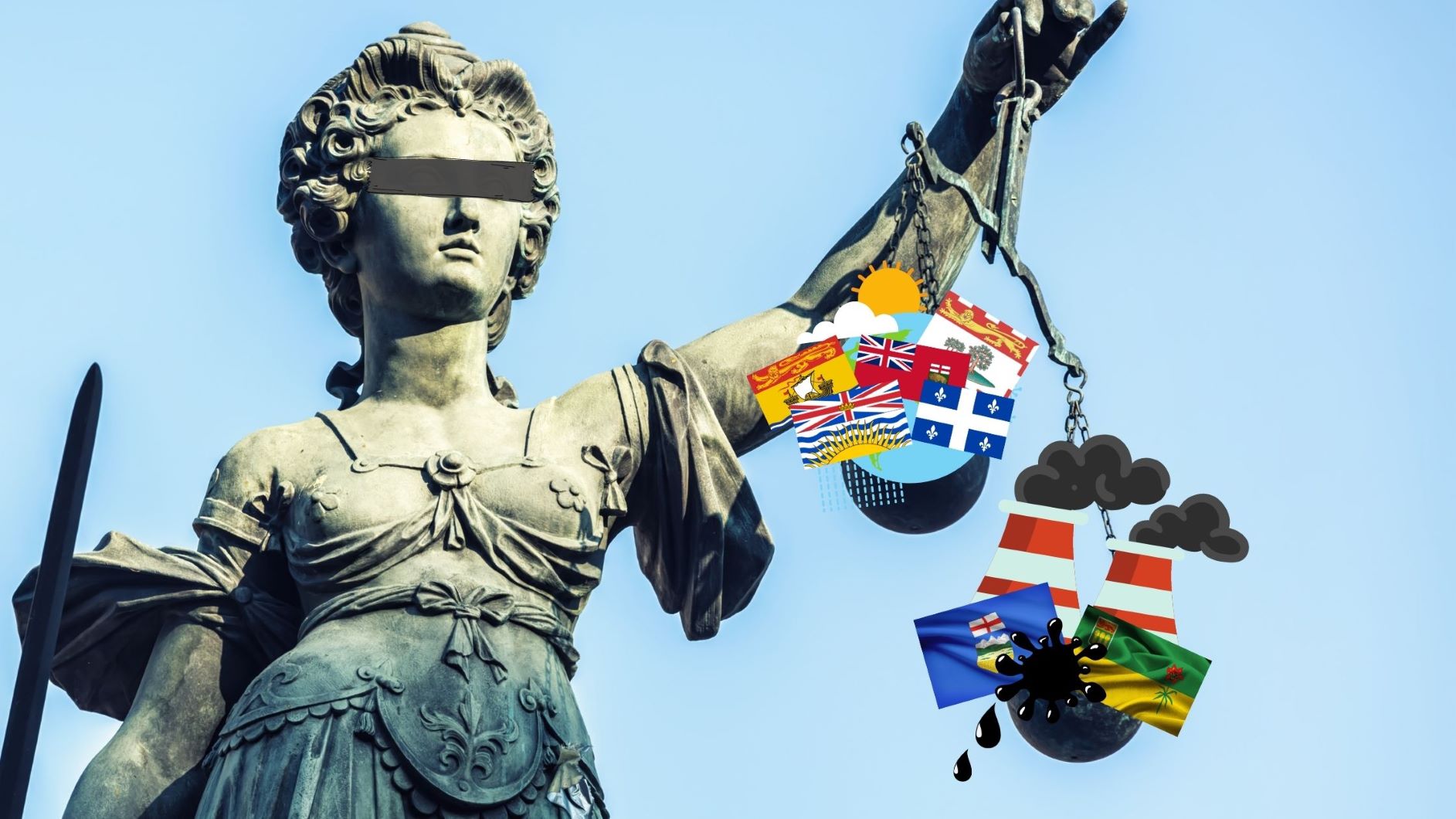 Pop quiz: Who recently blamed Alberta and Saskatchewan for Canada failing to meet its international commitments to reduce greenhouse gas emissions under the Kyoto Protocol?

As this post’s title implies, the right answer is (d), in the majority decision of the court in the Carbon Pricing Reference handed down last Thursday.

In its decision, the Supreme Court was concerned with the question of what happens when some provinces do not do their share on reducing greenhouse gas emissions. And fair enough – we should all be concerned about that problem since it has played a major role in Canada missing target after target, and since Canada’s government has long been reluctant to push provinces to do more on climate change.

Other lawyers have written in more detail about the decision itself (ie. here and here). This post will focus on what the court said about provinces that step up and those that drag their feet – and the role of the federal government in achieving climate targets.

Thursday’s decision was the result of “reference questions” posed by the governments of Ontario, Saskatchewan and Alberta to those provinces’ respective Courts of Appeal asking whether the federal government’s carbon pricing law (the “GGPPA”) was constitutional. The Ontario and Saskatchewan Courts of Appeal both held that the GGPPA was constitutional, while the Alberta Court of Appeal ruled that it was not.

These decisions were then appealed to the Supreme Court of Canada. The case was argued in September 2020. Our Environmental Dispute Resolution Fund (EDRF) is proud to have supported Generation Squeeze and other organizations who intervened to argue that carbon pricing is critical to protecting the rights Canada’s youth have to a healthy environment.

Thursday’s decision provides new detail to long-established constitutional principles that law students will be forced to learn for decades – as well as confirms the ability of Canada to set a minimum national standard of carbon pricing across the country. This finding is particularly important given the government’s recent announcement that the minimum will rise to $170/tonne by 2030.

The federal government and provinces may only enact laws governing subject matter assigned to them under the constitution. Canada’s Constitution Act, 1867 (not surprisingly) does not assign powers related to “climate change” to either the federal or provincial governments. Rather, it is one of several important topics that the framers of our constitution could not have anticipated, and with which the courts have had to grapple over the years.

In a reference case like this, when a court is asked to decide whether Parliament has authority to enact a law, it first identifies the specific subject matter of the legislation – or the ‘mischief’ the law is intended to address. Next, the court decides whether the matter relates to a federal or provincial power. If it meets a specific test, the court could – and in this case did – find that is a matter of “national concern” necessary for “Peace, Order and Good Governance,” in which case the federal government has authority over it and the law is valid.

If the court had ruled (as the Ontario Court of Appeal had) that the “matter” of the GGPPA was about minimum national climate standards of any type, that could have opened the door for other federal climate backstops, beyond pricing. Instead, the majority ruled that the GGPPA pertains only to setting minimum standards for greenhouse gas price stringency, leaving other future federal climate laws to be assessed on a case-by-case basis.

In ruling that climate change (specifically, minimum national standards of GHG pricing) was a matter of national concern, the Supreme Court was alive to the fact that climate change is a major threat to Canadians and that Canada has been failing in its international commitments to reduce its greenhouse gas emissions. The majority of judges wrote:

The effects of climate change have been and will be particularly severe and devastating in Canada. Temperatures in this country have risen by 1.7°C since 1948, roughly double the global average rate of increase, and are expected to continue to rise faster than that rate. Canada is also expected to continue to be affected by extreme weather events like floods and forest fires, changes in precipitation levels, degradation of soil and water resources, increased frequency and severity of heat waves, sea level rise, and the spread of potentially life-threatening vector-borne diseases like Lyme disease and West Nile virus. [para 10]

But even if climate change is a problem, critics of action often argue that nothing Canada does will make any difference for climate change. Well now (if you are a legal geek) you can always respond to this argument by quoting the Supreme Court:

I reject the notion that because climate change is “an inherently global problem”, each individual province’s GHG emissions cause no “measurable harm” or do not have “tangible impacts on other provinces” (emphasis in original) … Each province’s emissions are clearly measurable and contribute to climate change. The underlying logic of this argument would apply equally to all individual sources of emissions everywhere, so it must fail. [para 188]

In reaching this decision, the Supreme Court drew on a number of important international decisions from the Netherlands and Australia in which government actions were successfully challenged for failing to do enough to address climate change. One suspects that the Supreme Court’s reliance on these cases will be cited in the Charter-based climate cases currently making their way through Canadian courts (such as Environnement Jeunesse, La Rose and Mathur et al.). For example, this finding by the Land and Environment Court in New South Wales that the Supreme Court quoted may be helpful:

As we have pointed out previously, every additional tonne of carbon dioxide emitted in Canada causes harm, and we need to clean up our mess.

Why climate action by the provinces matters, according to the court

While each province’s emissions do contribute to climate change, there is no denying that climate change is an “inherently global problem” that neither Canada nor any one province acting alone can wholly address. This weighs in favour of a finding of provincial inability. As a global problem, climate change can realistically be addressed only through international efforts. Any province’s failure to act threatens Canada’s ability to meet its international obligations, which in turn hinders Canada’s ability to push for international action to reduce GHG emissions. Therefore, a provincial failure to act directly threatens Canada as a whole. [para. 190]

Here’s the paragraph that inspired the above pop quiz:

[E]ven significant emissions reductions in some provinces have failed to further the goals of any cooperative scheme, because they were offset by increased emissions in other provinces. Between 2005 and 2016, Canada’s total GHG emissions declined by only 3.8 percent … [and] emissions fell by 22 percent in Ontario, 11 percent in Quebec and 5.1 percent in British Columbia, three of the five provinces with the highest levels of emissions in Canada, as well as by over 10 percent in New Brunswick, Nova Scotia, Prince Edward Island and Yukon. But these decreases were largely offset by increases of 14 percent in Alberta and 10.7 percent in Saskatchewan, the other two provinces among the five with the highest levels of GHG emissions... As a result, Canada failed to honour its commitment under the Kyoto Protocol before withdrawing from that agreement in 2011, and it is not currently on track to honour its Copenhagen Accord commitment. [para 184, Emphasis added]

The Supreme Court is, of course, not the first to point out that Canada would have met (or come close to meeting) some of its climate targets but for emissions from Alberta and Saskatchewan (although frankly ordinary residents of the two provinces aren’t the problem – it’s the massive increases in emissions from the oil and gas industry). However, maybe the fact that the Supreme Court of Canada is calling out laggard provinces will have more of an impact. And there are several other paragraphs in which the court highlights that one or two provinces can undermine the good done by other provinces in taking climate action.

This insight was key to the Supreme Court ruling that addressing climate change is a problem that individual provinces are unable to address on their own, and therefore that a minimum national carbon price is a matter of national concern. It may well be a factor in future cases involving disputes between the provinces and the Canadian government about climate action – or even other environmental issues of national concern.

Inconsistent and weak provincial climate action, and the reluctance of the federal government to insist on strong action, has been a major factor in Canada’s repeated failure to meet its climate targets.

A federal minimum carbon price, now endorsed by the Supreme Court of Canada, is an important tool. But the provinces need to be encouraged and where possible required to do more on the climate file. If Canada implements a strong price on carbon but some provinces continue to backslide in other areas, Canada may continue to have difficulties setting and meeting fair and science-based climate targets.

Bill C-12, currently before Parliament, is supposed to introduce accountability in how Canada sets and achieves its climate goals. Right now, however, the Bill does not include any language requiring any government official to actually achieve the national “milestones.” Nor is there any requirement in the Bill that the federal and provincial governments will even sit down and work out how Canada as a Confederation will meet our collective targets (let alone any expectation that the Canadian government will tell the provinces what their fair share is).

Regardless of whether the federal government is simply accountability-adverse, or whether they are trying to avoid being seen to intrude on provincial affairs, Bill C-12 needs to include real accountability and to address the climate-laggard problem that the Supreme Court of Canada has seen so clearly.

While the Supreme Court has not ruled what other types of federal climate laws will pass constitutional muster, the Court was clearly preoccupied with fairness between the provinces and ensuring that Canada as a nation can do its part to address climate change. Based on the court’s reasoning, future climate laws based on ensuring that each province meets minimum standards in reducing greenhouse gas emissions may have a good chance of been upheld as constitutional.

The Supreme Court of Canada understands why it “directly threatens Canada as a whole” when provinces that drag their heels, or simply decide not to act on climate change. Now it is time for Canadians to push their elected officials – at all levels – to the same conclusion.