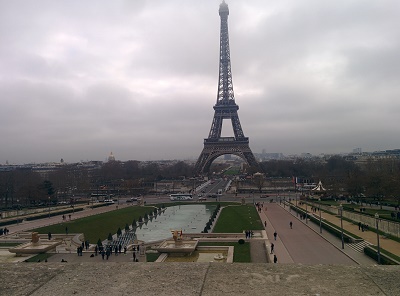 In the haggard, pre-Christmas weeks after the Paris climate negotiations, staff Counsel Andrew Gage is home with his family in Victoria and Communications Specialist Anjali Appadurai has just finished the long journey to India to visit family. The lead-up, attendance and follow-up to COP21 were intensely busy times, and we haven’t written as much for the Environmental Law Alert as intended, but it seems fitting to post a wrap-up of our time in the grey city of Paris, and tell you a bit about what we did there. For Andrew, it was a new experience at a UNFCCC COP, and for Anjali, a long-time COP activist, it was a bit of a home-coming.

At COP21 we did, of course, keep an eye on the ongoing international negotiations towards the now-signed Paris Agreement. After all, that’s why the world gathered in Paris last week. In particular, we joined one of the most critical conversations of the two weeks – on Loss and Damage – by collaborating with other groups to press Canada to drop its insistence that the most climate-vulnerable of the world should not be able to even raise questions of compensation when their nations are hit by cyclones or rising sea levels. Ultimately, that language was not included in the Paris Agreement itself, but instead in a separate “decision” of the parties about how they will interpret the Agreement, and lawyers around the world are debating how the language of the two documents related to loss and damage should be interpreted.

In addition to following and engaging in the UNFCCC negotiations, we also went to Paris to join a conversation that is critical in its own right – a conversation about where the climate movement needs to go post-Paris. More specifically, we wanted to talk about how to target some of the biggest drivers of climate change and the most significant blockers of progress: the fossil fuel industry. How do we, as a movement, hold this industry accountable for their actions?

Much of the international climate movement has been working towards the Paris round of negotiations for years, but many of us realized, as Paris approached and then passed, that there hasn’t been enough discussion about what happens post-2015.

Here’s how Andrew described the conversation we wanted to have in a blog post before we left for Paris:

I’m going to Paris for West Coast Environmental Law not because I expect a perfect agreement, but because I want to be part of the conversation about how to level that field (or maybe, in my wildest dreams, tilt it a bit towards climate justice).

Climate justice requires that the communities impacted by climate change have a voice; by acknowledging the legal strength of those communities, and their countries, to hold major fossil fuel polluters accountable for their contribution to climate change we can start to challenge the assumption that fossil fuel pollution is normal and carries no legal consequences. That, in turn, can drive renewed urgency for international action.

So how did the conversation about fossil fuel accountability go in Paris?

Well first of all, we weren’t the only ones trying to initiate that conversation. Greenpeace SouthEast Asia had a great event about their human rights complaint against 50 of the world’s largest fossil fuel polluters. At this event a Commissioner from the Commission for Human Rights of the Philippines confirmed the exciting news that the Commission will launch an investigation into the complaint in the near year.

Matt Pawa, a noted climate litigator, held a very well-attended event about putting Exxon on trial for fraud and conspiracy. The evening included a well-researched presentation about how the fossil fuel industry, led by Exxon Mobil, has been actively deceiving the public for decades.

Climate superstars Naomi Klein and Bill McKibben held an ‘Exxon on Trial’ event at the People’s Climate Summit, which they carried out mock-trial style, calling up “witnesses” to testify against the oil giant.

The Heinrich Boell Foundation ran two events profiling Saul Luciano Lliuya, a Peruvian farmer who is suing German energy-giant RWE for its contribution to climate change (more on him in a moment).

And we organized several events of our own, which were also well-received.

First, on December 5th we held two workshops at the “People’s Climate Summit”, a large conference hosted by the Coalition Climat 21, a group of more than 130 organizations who organized many of the civil society events at COP21. The Summit brought together thousands of civil society groups and individuals for a weekend of workshops, forums and events.

Andrew shows participants a copy of his Carbon Budget report, published in November 2015.

The “tools” we outlined for participants included insights from our research into how best to engage the public in the climate change discussion and an outline of the legal and campaign options we foresee for holding fossil fuel companies accountable.

In the afternoon we hosted a panel discussion about about scientific and legal proof that could link fossil fuel companies to the harm that their products cause. We were fortunate to have an extraordinary line-up of panelists including:

This was a stellar panel of experts in their respective fields. Our audience also included some remarkable experts in their own right. Wang Canfa, one of China’s most respected environmental lawyers, was in attendance and asked many insightful questions of the panelists, prompting a deeper and fuller discussion.

Then, unexpectedly, we were also joined by Peruvian farmer Saul Luciano Lliuya, who is currently suing the German energy giant, RWE, for climate impacts. Before we departed for Paris, the two of us had excitedly discussed Saul’s remarkable story, speculating on ways his story could be connected to the work we’re building in West Coast’s Climate Program. To have Saul show up at our panel discussion, accompanied by his father and three representatives from the NGO GermanWatch who are helping with the case, was perhaps the most pleasant and unlikely of surprises the day could have brought. Saul’s story became the focus of the latter part of the panel discussion, prompting a weighty discussion in which the panelists were able to dive into the complexity of the case and offer Saul and his representatives some excellent insights. And we didn’t skip out on the group photo, either!

Report release: ‘Taking climate justice into our own hands’

A high point of the conference was the public release of our report, ‘Taking climate justice into our own hands’, co-authored by Andrew Gage and Margaretha Wewerinke, a law professor at the University of the South Pacific in Vanuatu. The report explains how individual countries (or in Canada, at least, provinces) can set the legal rules for the consequences of climate change harm that occurs within its boundaries – whether under their own laws or under legislation. It also provides a model of such legislation, called the ‘Model Climate Compensation Act’.

As Andrew said in our press release: “The barriers to suing fossil fuel polluters are not legal – they are political.”

To release the report, we held a well-received press conference at the UNFCCC venue, sparking conversation amongst our peers and creating momentum for the rest of the conference. In addition being attended by media from around the globe, a group of activists showed up in support, and gave rave reviews.

Margaretha Wewerinke and Andrew Gage work on their presentation before the press conference.

The release of Taking Climate Justice into our own Hands was also the launch of our new website, Climate Law In Our Hands (www.climatelawinourhands.org), which invites a conversation about “people power and responsibility for climate change”, challenging readers to:

Watch the press conference here, and check out the coverage in the Globe and Mail, Truth-Out and Inter Press Service, a major southern news service.

Anjali, Margaretha and Andrew speaking at the UNFCCC press conference on the report release. Photo courtesy of John Bonine.

Andrew talks to reporters and friends after the press conference.

An open meeting on the movement

Finally, but not least significantly, we rounded off our second week by hosting an open meeting about building a climate movement that is focussed on taking on the true blockers of climate action: large-scale fossil fuel polluters, instead of blaming individuals who don’t change their light-bulbs (to use a common example). Yes, we recognize that individual choices play a role in climate change, but we lack the power and influence of fossil fuel companies and other large companies that benefit from a fossil-fuel addicted economy.

Anjali facilitated this discussion, with participation from several major environmental organizations that have been working on holding fossil fuel companies accountable in their own countries. We heard perspectives from Norway, the US, Nepal, the UK, Australia, China and more!

A scene from the open meeting.

It was only the beginning of a conversation, but most of the groups that attended are committed to continuing that conversation. The sheer diversity of perspectives and the potential for a coordinated international effort to hold these companies accountable made us very excited. We look forward to continuing the conversation!

As we decompress from two weeks of intense activity and prepare for the holiday season, we’re also reflecting on lessons learned in Paris and excited about the conversations that we started and the connections we made. We’re looking forward to following up with new friends and allies we made, and to expanding that network. COP21 was not only about the international negotiations – it was a giant global convergence of eager minds coming together to find new solutions to the ongoing climate crisis.

We believe that in a post-Paris world, social movements will be the catalyst for the change we want, and we must demand real action of our political leadership. The climate movement needs new strategies that shift power from fossil fuel polluters to people and communities. We’re proud to be building a strategy to do just that, and are excited to continue creating momentum for climate justice in a post-Paris world.