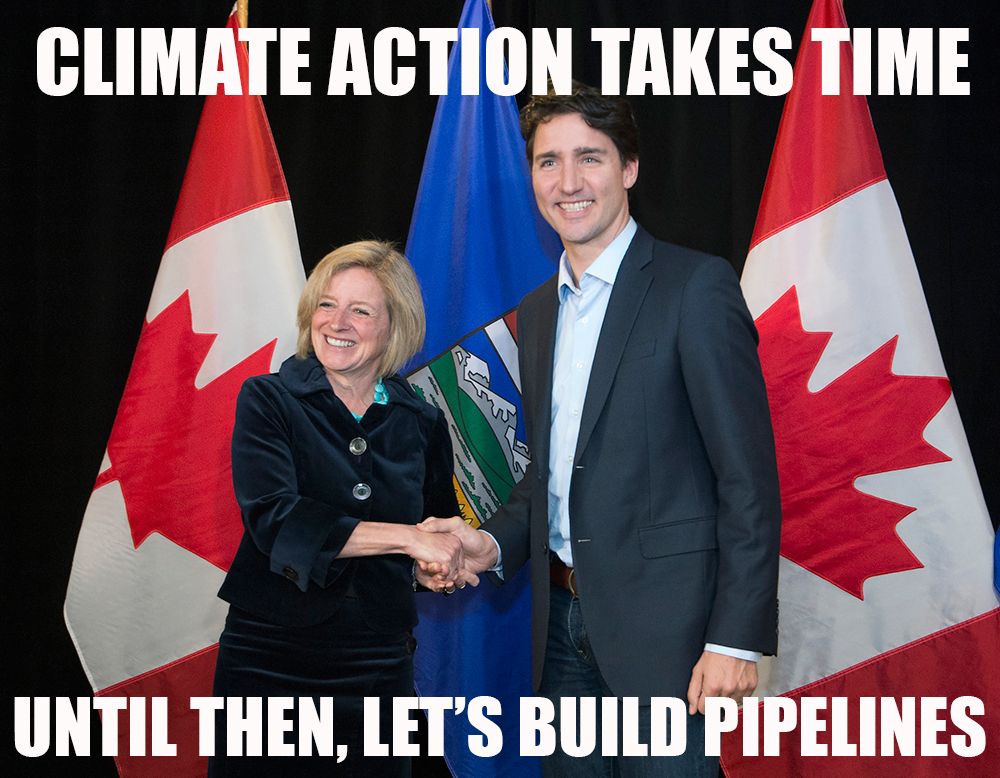 The thing that frustrated me most when watching the Prime Minister’s press conference earlier this week approving the Kinder Morgan and Line 3 pipelines is that he – or at least his government – knows that these pipelines undermine Canada’s climate goals and move us away from a sustainable future.

That’s pretty clear from the government’s “mid-century long term strategy” on climate change, released on the last day of the Marrakech climate negotiations (Friday, November 18th). The Strategy, which is really more of a discussion piece, carefully avoids highlighting the tensions between building oil sands infrastructure and meeting the Paris climate goals. But it does so in ways that expose the hypocrisy of the government’s positions.

In particular, the Strategy reveals that the government understands that:

The Strategy includes a discussion about the importance of building low energy infrastructure.  We agree 100% with this section of the Strategy – which contains compelling arguments that should have been considered by the government in deciding whether to approve the Kinder Morgan pipeline and tankers project and other fossil fuel infrastructure:

Investments [in infrastructure] are influential in setting long-term greenhouse gas pathways as the lifespan of infrastructure assets are long-lived, often ranging from 25 to 60 years. …

The existing Kinder Morgan pipeline has been in operation for over 60 years, and the assumption is that the new project would similarly be in use for many decades.

The new pipelines are proposed to handle expanded production in the oil sands – a goal which is absolutely inconsistent with decarbonisation.  Prime Minister Trudeau acknowledged that when asked about the climate impacts of the pipelines this week – but argued that growth in production was inevitable and that Alberta’s decision to cap such growth to 100 megatonnes of new emissions justified the expansion.

Prime Minister Trudeau argues that this cap is part of Canada’s climate change plan, ignoring the fact that an increase in Alberta’s oil sands emissions (even if capped at 100MT) means that other industries – and ordinary people – will need to reduce their own emissions even further to meet Canada’s climate targets (which are currently the ones set by the Harper government).  The climate benefits of Canada’s recent announcements on phasing out coal and low carbon fuel standards are erased by approving these pipelines.  Meanwhile, Natural Resources Minister Jim Carr says that other pipelines – such as Keystone XL and Energy East are still on the table – even though those additional pipelines would blow past the 100 MT cap.

The government clearly understands in its long-term Strategy on climate change that building new long-term pipeline infrastructure will “lock-in” the pathways for increased greenhouse gas production that expansion of the oil sands will bring.

Prime Minister Trudeau and his Minister of Environment and Climate Change, Catherine McKenna, spoke this week about “the transition that everyone knows is coming” – that is, a transition away from fossil fuels. But they re-iterated their view that expanding the oil sands is not inconsistent with that transition – indeed it is an “essential part of the transition” – because the world will need fuel during the transition.

The oil sands are not, of course, offering us natural gas, which some have controversially argued can act as a “bridge fuel” during our transition to a renewable energy future. We are talking about bitumen – one of the most energy and environmentally expensive sources of oil in the world. Scientists tell us that Canada’s oil sands production should be “negligible” after 2020 if we are to meet the Paris targets and avoid catastrophic climate change. One of those scientists, Paul Ekin explained the significance of his 2015 study:

I think the most sobering thing from this study is the gulf that it reveals between the declared intention of the politicians and the policy-makers to stick to two degrees, and their willingness to actually contemplate what needs to be done if that is to be even remotely achieved.

The federal long-term Strategy recognizes that the oil sands need to “decarbonise” – but for the Canadian government that apparently doesn’t mean moving away from producing and transporting bitumen. Rather, the Strategy suggests producing a lower quantity of greenhouse gases per barrel while producing more barrels. It mentions electrification of oil sands production as one “avenue to decarbonisation” (reducing the emissions associated with each barrel of bitumen by 13-16%). However, the Strategy is most enthusiastic about a host of more “innovative” (aka speculative) technologies (such as “solvent and electrothermal-based extraction methods for in situ, or direct contact steam generation…”):

These innovations could offer up to 50% GHG emissions reductions per barrel produced and could prove pivotal in delivering economically and environmentally competitive fossil fuel supplied to a decarbonising global market.

This statement raises so many interesting questions:

Prime Minister Trudeau may speak about the “transition that we all know is coming,” and the Strategy may talk about a “decarbonising global market,” but the government’s insistence that oil sands pipelines are a part of this strategy only makes sense if such transition and decarbonisation is seen as a far-off goal, that may or may not be met. Prime Minister Harper promised to decarbonise by the end of the century – and it sounds like the Trudeau government’s timeline may be just as long.

The Strategy, unlike the Prime Minister in his announcement, does recognize that the Canadian oil industry may be in for a rough road. In one section, the report underscores the tension between ongoing oil sands expansion and selling fossil fuels in a “decarbonising global market”:

Canadian oil producers operate in a global market and they are essentially price takers for their outputs ... Moreover, these companies may face additional challenges associated with decreasing global demand for their goods in the future as governments act to mitigate GHG emissions.

Ignoring the magnitude of the problem

The Strategy suggests that while Canadians recognize the need for climate action, “the magnitude of the challenge is less well understood…." The irony is that the same might be said of Prime Minister Trudeau’s pipeline announcement and the Canadian government’s approach to the oil sands and oil sands pipelines.

The Prime Minister’s announcement – and the Strategy’s discussion of oil sands – is focused entirely on the direct emissions from extracting and processing bitumen. There is no mention of the emissions that occur once the fossil fuel is sold and burned – the main source of emissions from the oil sands.  There is no recognition that fossil fuel development will need to be scaled back and that we may need to “keep it in the ground.”

Naomi Klein argues that “this changes everything” – meaning that climate change undermines the argument in favour of many things that society has taken for granted.  But you would not know, from the Prime Minister’s pipelines decisions or from reading the government’s long-term Strategy, that climate change calls the future of the oil sands into question.