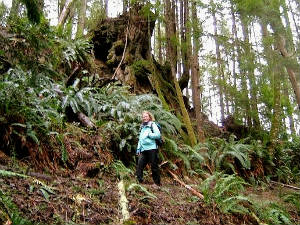 On September 13th, 2011, the Land Use Committee A of the Capital Regional District (CRD) voted to reject a rezoning proposal that would have allowed the controversial Marine Trail Resort development, at the boundaries of the Juan De Fuca Provincial Park.  The rezoning bylaw had been widely expected to pass, but a groundswell of public opposition – and a legal opinion funded by West Coast Environmental Law – helped convince the CRD Directors to oppose it.  Zoe Blunt of the Vancouver Island Community Forest Action Network (VIC FAN) wrote:

Our lawyer's opinion letter, which we delivered at last week's public hearing, combined with the unprecedented public response, tipped the balance and forced the committee members to deny the Juan de Fuca resort application yesterday. Hooray! We could not have done it without your [West Coast Environmental Law’s] help. I'm so grateful and so are thousands of park lovers everywhere.

Congratulations to all involved!

On August 16th, our Environmental Dispute Resolution Fund gave a grant to VIC FAN and the Sea to Sea Greenbelt Society to hire the law firm of Underhill Boies Parker to examine legal options associated with the development.  In their opinion letter, VIC FAN’s lawyers describe the development as follows:

The proposed development that is the subject of these Bylaws envisions 267 cabins, as well as 6 permanent caretakers’ residences, 2 recreation centres, and a lodge with a restaurant, retail store and spa. The lands upon which the development is to take place are currently completely undeveloped, are located within the 132,000 hectare area known as the “Rural Resource Lands” with a total population of only 160 people, are designated as “Renewable Resource Lands” in the RGS and “Resource Lands” in the OCP, are well outside the urban containment boundaries of the CRD, and are all within just over 150 metres of the Juan de Fuca Marine Trail

Opposition to the Marine Trail Resort development has been fierce, with the Dogwood Initiative, Wilderness Committee, Sierra Club of BC and other organizations joining VIC FAN and the Sea to Sea Greenbelt Society in their opposition to the development.

There is no doubt that the hundreds of people who flooded the public hearings regarding the development were instrumental in the defeat of the bylaws.  However, the VIC FAN legal opinion prepared by Catherine Boies Parker and Robin Gage of Underhill Boies Parker, also helped by questioning the legality of the rezoning.

Catherine and Robin’s opinion explained that the bylaws were inconsistent with the CRD’s Regional Growth Strategy (RGS) and with the Official Community Plan (OCP) for the area, and that if they passed they would be illegal:

The CRD’s RGS simply does not allow for this kind of tourism development in this area. It also does not allow for such extensive development of accommodation units outside established boundaries.  As well, the RGS does not contemplate such a significant alteration of land use without appropriate planning and sufficient controls.  …

[I]n our view the proposed Bylaws are clearly unlawful in that they are inconsistent with both the RGS and the OCP.  Accordingly, the CRD, whether acting as the whole Board or through Land Use Committee A, has no jurisdiction to enact these Bylaws.

In addition, Catherine and Robin argued persuasively that it was the CRD Board as a whole, and not just the Land Use Committee A (which was perceived as more sympathetic to the developer), which should determine whether or not the bylaws were consistent with the Regional Growth Strategy.  Look for this argument to come up again in relation to any future proposals for development of lands in this region.

Congratulations again to VIC FAN, the Sea to Sea Greenbelt Society and all of the people who spoke out against this development.

By Andrew Gage, Staff Lawyer (no relation to Robin Gage, who is mentioned in this article).

Photos courtesy of Shannon Dukowski (photo of the Juan De Fuca Trail) and Robert Lovett (photo of the public hearing) under a Creative Commons non-commercial use Licence.