“We are going to Sue Big Oil”: The birth of a new movement 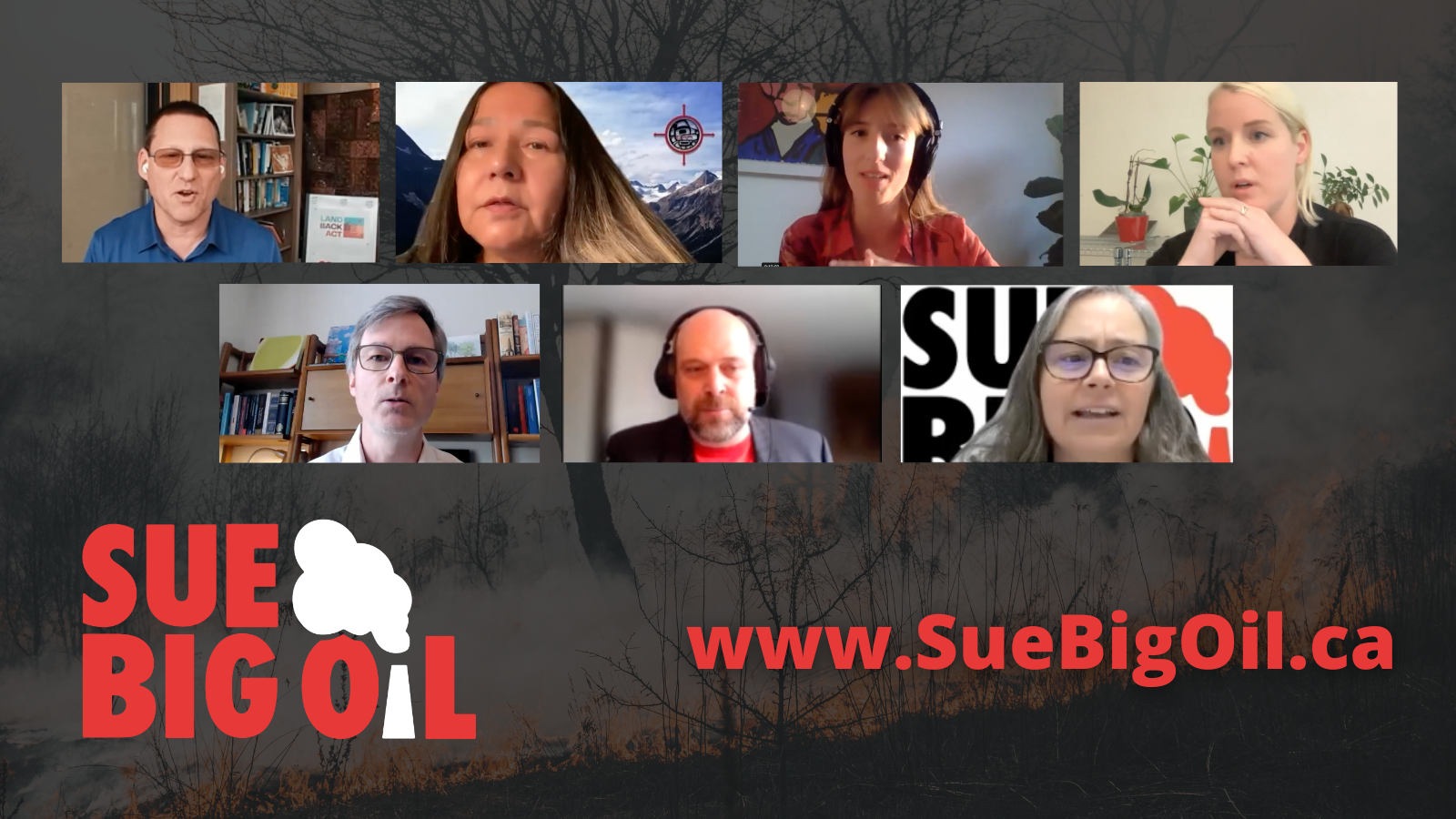 “We are going to sue Big Oil,” noted journalist Avi Lewis told us. “This is an historic moment, and you are going to be able to tell everyone you were here when it began.”

Over 150 people gathered on Zoom at noon on Wednesday, June 15, 2022 to hear Avi and our special guests launch the Sue Big Oil campaign – a movement convened by West Coast Environmental Law, but which we hope will ultimately belong to all British Columbians who understand that fossil fuel companies can no longer profit while we pay the price in heat waves, floods and wildfires.

Kukpi7 Judy Wilson, Chief of the Neskonlith Band and Secretary-Treasurer of the Union of BC Indian Chiefs, welcomed us with a prayer and her thoughts about how the fossil fuel industry had fueled climate change. She reminded us of the huge impacts that both climate change and oil and gas infrastructure have in Indigenous communities, and told us:

The impacts of the climate crisis extinguish our rights to the land when they are destroyed and as well our rights to practice and pursue our traditional ways of life. There is no opting out of climate change. We must do everything in our power to reduce climate change so that we may have a liveable future. And that liveable future is not just our future but it’s our children’s and our grandchildren and those yet to come.

There is no shared prosperity in oil. Fossil fuel companies continue to take in record profits, while everyday people struggle with the unaffordability of the overlapping climate disasters we’re experiencing. [Here] in BC you would have experienced the four atmospheric rivers, the heat dome, the wildfire and the flooding. … These costs are not going away … It’s past time that fossil fuel companies are held accountable for their role in the climate crisis.

Avi then laid out the agenda for the rest of the launch, promising that we would hear from:

Avi interviewed Laurie van der Burg, co-lead of the Global Public Finance team at Oil Change International, who joined us from the Netherlands. Before taking on her current role, Laurie headed the efforts of Friends of the Earth Netherlands to sue Shell Oil – a court battle that they won last year!

[When we started] I didn’t feel very confident that we had a chance of actually winning a case, but I thought that even if we wouldn’t win, there was so much we could win by filing it. Because it would help us draw attention to the role of the fossil fuel industry and specifically Shell in wrecking the climate and it would also force Shell to defend its inadequate and misleading climate plans in court.

Over time there was more and more scientific evidence that was being published on the danger of surpassing 1.5° C of global heating and [evidence of] Shell’s early and elaborate knowledge of the climate crisis and the role fossil fuels in causing it. And … instead of taking action they actually chose to mislead the public, and work to stop, delay or defeat climate action. …

Laurie also spoke about the more than 17,000 individual Dutch citizens who signed onto the case and the ways in which broad public support for the case promoted public conversations about the role of the fossil fuel industry in causing the climate crisis. This was not just a legal strategy, but a broad-based social movement drawing in people from many backgrounds. Laurie explained:

We had to work with scientists, with lawyers, with other NGOs, with journalists, with academics, students, and even theatre producers to have the effect that we ended up having … with this case.”

We won the case in May last year. So, the court ordered Shell to lower its emissions by 45% by 2030 to stay on track for 1.5 C. This basically means that Shell needs to phase down its oil and gas production, because there is no other way that you could realistically realize these emissions reductions. … I’m sure that we’ve managed to “put the heat to the shins,” a Dutch expression, … I’m sure we’ve made the industry very nervous with this case.

We then heard from West Coast Environmental Law’s own Julia Kidder, who was living in Ashcroft, BC during the Heat Dome a year ago. Due to a power failure, she had to choose between running her refrigerator or air conditioner in one room, and Julia suffered:

As the week progressed, I realized that none of us across the province were prepared for what a climate-induced heat dome would do to our bodies. Human beings are fragile, and we are not meant to live under a pressure cooker.

(…) after a few days at 45° C I began to have auditory hallucinations and headaches that I didn’t know were caused by my prolonged exposure to the heat. … Luckily my cousin – a paramedic who had been working in Williams Lake that week – spoke with me on the phone that evening and recognized my symptoms as severe heatstroke: I was slurring my words at that point, had numbness in my hands, and was finding it hard to balance myself.

She picked me up in Ashcroft and we drove in the middle of the night over the one open highway not closed due to fires towards the Coquihalla. … The next morning, I was taken to urgent care at UBC – there I received fluids and a CT scan showing no permanent damage to my brain.

Julia closed noting that as a privileged, healthy person, she could “not imagine how many untold stories there are from last year,” recalling the heat wave deaths, and the forest fires and floods that destroyed communities and drove people from their homes. “These impacts are the direct, attributable consequences of a maniacal, negligent fossil fuel industry.”

Legal experts on the campaign and lawsuit

As a Staff Lawyer with West Coast Environmental Law I explained why it is important that BC communities Sue Big Oil. For more, you can read our publication Suing Fossil Fuel Giants: An Introduction, but I focused on two main goals.

The first is obvious – our communities need resources to keep us safe from climate change. The Insurance Bureau of Canada estimates that Canadian local governments should be spending $5.3 billion each year to protect us from future climate impacts.

The second goal, however, is to challenge the economic conditions that have resulted in corporations and governments increasing the burning of fossil fuels even during the decades that they knew that this was causing climate change – to the point that we now see the heat waves, wildfires and flooding that BC suffered last year.

Our society has largely separated the financial rewards of the fossil fuel economy from its costs (climate change). This gives fossil fuel companies a strong incentive to lobby against climate action, peddle false climate solutions and delay the development of low carbon technologies and fund misinformation about climate science. In 1998, for example, a plan to shift public opinion on climate change developed by the American Petroleum Institute and other industrial players stated that “victory will be achieved” when those calling for climate action on the basis of climate science “appear to be out of touch with reality.” And that type of strategy makes economic sense for companies seeking to keep making huge profits from fossil fuels.

But separating profits and costs also results in governments, investors and the public viewing the fossil fuel industry as wealth creators, because the costs of their products do not appear on their balance sheets. This in turn results in banks funding projects that quite literally contributed to the Heat Dome deaths and the burning of forests – and which will cause more losses in the future. It results in governments putting taxpayer dollars to false climate solutions aimed at allowing the oil and gas industry to claim that it’s reducing its emissions, all while producing more oil and gas that will contribute to the climate crisis.

Suing Big Oil forces fossil fuel companies to record the risks of climate lawsuits on their balance sheets, making it clear that business decisions need to consider climate liabilities and debts. The lawsuits can include global companies - not just Canadian companies - sued in Canada because their global emissions have caused harm here.

At the campaign launch, I was followed by UBC’s Professor Stepan Wood, who emphasized that there is a solid legal basis in Canadian law for a lawsuit of this type. Stepan referred to a letter on climate lawsuits that he and 27 other law professors wrote in 2019, but then noted that the evidence supported such a case has only gotten stronger since then. He told us:

The logic of climate accountability is simple. Companies that profit from selling a product that they know is harmful should pay their share of the costs of the resulting harm. And this logic has been applied successfully to a range of harmful products from asbestos to breast implants to tobacco. So climate accountability lawsuits are unprecedented in Canada, but don’t confuse novelty of subject matter and scale with novelty of legal theories. These lawsuits can proceed on the basis of well recognized legal wrongs.

How we’re going to win

Phase I – Over the summer we’re going to build the network that is calling for local governments to Sue Big Oil. That includes getting as many people as possible to sign the Sue Big Oil Declaration through spreading the word on-line and in our communities. It also includes signing more existing community groups onto the campaign – but also identifying individuals who will work together on the campaign.

Phase 2 – Up to and during the Fall 2022 local government elections, we’re going to be challenging candidates to commit to setting aside $1 per resident for a climate litigation fund, and to work with other local governments to bring a class action lawsuit.

And in Phase 3 – In November and after, our network will be going to newly-elected local governments, trying to get them to make that commitment to bring a class action lawsuit. We’ll also be supporting local governments and elected officials that do so, through public education and fundraising.

Learn more on our How it Works and Get Involved Pages.

We ended the Sue Big Oil launch with a viewing the first draft of our campaign video (you can view the updated video here). And then everyone on the Zoom meeting – all 150+ of them – let out a cheer for Sue Big Oil. You could feel the enthusiasm – and the confidence that we can take on the global fossil fuel industry and we can win.