West Virginia v Environmental Protection Agency: What Are the Implications for Canada? 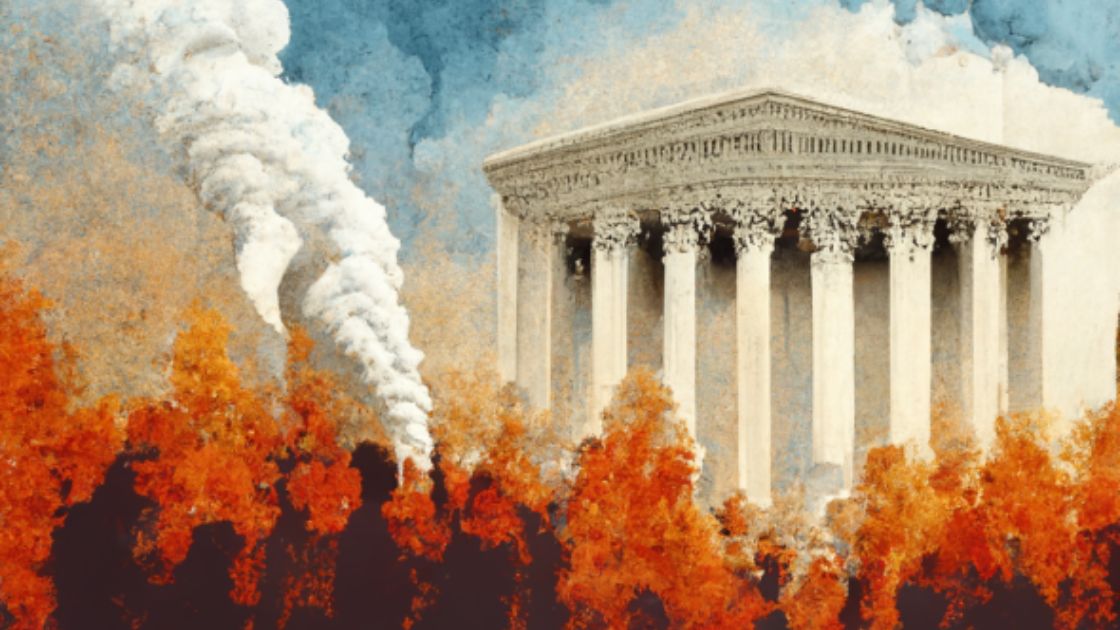 From across the border, Canadians have been watching the fallout from recent decisions from the United States Supreme Court. In its 6-3 decision in West Virginia v. EPA (West Virginia), released this past summer, the U.S. Supreme Court significantly limited the Environmental Protection Agency’s ability to regulate greenhouse gas emissions.

In this post, we examine the implications of the West Virginia decision: What are the effects of this decision during a global climate crisis? How does the U.S. Supreme Court decision compare to Canadian courts’ treatment of regulatory authority? And more importantly, how do we respond when a decision in one jurisdiction can lead to floods, fires, and ecological devastation throughout the world?

West Virginia concerned Environmental Protection Agency (EPA) rules that require existing power plants to reduce their carbon dioxide emissions through an approach called generation shifting. Generation shifting involves systematically decreasing the use of highly polluting electricity sources in favour of electricity sources that emit less pollutants. The EPA argued that it had the authority to implement generation shifting under a section of the Clean Air Act which allows the agency to set standards for existing sources of air pollution (section 111(d)).

The Court, however, rejected the EPA’s argument, ruling that the agency must have express authority from Congress to adopt a generation shifting rule, invoking a legal principle known as the “major questions doctrine”. According to the Supreme Court, the major questions doctrine requires Congress to clearly express when they are “authorizing an agency to exercise powers of vast economic and political significance”. If an administrative agency claims such sweeping powers, the Court expects Congress to explicitly state that it meant to grant those powers.

According to the majority, these extensive powers were significant enough to cast doubt on whether Congress had intended to grant them. As Michael Burger summarized, “Congress didn’t clearly tell EPA that it could eliminate coal from the fuel mix.”

Some argue that the decision in West Virginia is unlikely to pose a significant challenge to the EPA’s overall progress combatting climate change. The law imposing generation shifting had never even gone into effect. But others are concerned that the decision will impact administrative bodies’ capacity to effectively address the climate crisis and other “national problems,” with the potential to threaten regulatory power as a whole.

Other recent U.S. Supreme Court decisions demonstrate a trend of using the major questions doctrine to weaken regulatory power. The Court has used the doctrine to strike down state-imposed workplace vaccine policies and to disallow the banning of evictions in counties with high levels of COVID-19 transmission. The Indigenous Environmental Network released a statement highlighting the gravity of the Supreme Court’s recent decisions and urging President Biden to take action against fossil fuel expansion:

To be clear, the Supreme Court’s latest decisions underwrites continued settler violence perpetrated against Indigenous peoples, our lands, our bodies, our nations, and our futures. By circumventing well-settled precedent and statutory law, the conservative Court is reaching far beyond its constitutional authority, ‘legislating from the bench’ and is being used by the Right to push a full assault on the working class, BIPOC communities and tribal nations.

The West Virginia decision comes at a time when the Intergovernmental Panel on Climate Change (IPCC) has sounded the alarm that we have less than a decade to drastically reduce our greenhouse gas emissions in order to have hope of returning to 1.5C temperature rise above pre-industrial levels by the end of the century. Already, billions of people are suffering and dying from the effects of ecological disaster. Those most impacted include people living in the Global South, working class people, disabled people, and Black and Indigenous peoples.

While the U.S. Supreme Court fearmongered about the EPA’s authority to force coal plants to shut down, the IPCC paints a far bleaker picture of what our world will look like if we do not phase out coal. Eliminating coal power is in fact the only option if we are to remain within 1.5C warming.

The Problem with Asking for Permission

Proponents of the West Virginia decision would perhaps argue that the EPA can still implement generation shifting, so long as Congress has given the EPA its permission to do so. But this reasoning downplays the unnecessary hurdles of obtaining Congress’ explicit authorization. In her dissent, Justice Elena Kagan emphasized, “a key reason Congress makes broad delegations […] is so an agency can respond, appropriately and commensurately, to new and big problems” (West Virginia, at 5 of Justice Kagan’s dissent).

More fundamentally, through the major questions doctrine, the Court has given judges broad powers to undermine administrative action based on its own subjective assessment of whether the impacts of those actions have sufficiently “vast economic and political significance” that the court should intervene. With concerns about the politicisation of the U.S. Supreme Courts, the vagueness of the doctrine means that courts may be seen as using it simply to prevent administrative action that they do not like; as Burger states, “The Justices are eyeballing it.”

Regardless of whether the EPA will surmount the challenges that the Supreme Court has thrown its way, West Virginia reaffirms that the highest court in one of the top three greenhouse gas-emitting countries in the world will not save us from unprecedented ecological disaster. Tara Houska writes of the West Virginia decision, “I wonder how much more the people will tolerate from this tiny group of individuals and a Congress with more excuses than actions.”

No ‘Major Questions’ Doctrine in Canada

The U.S. Supreme Court has used the major questions doctrine to undermine regulatory power and side with the fossil fuel industry. Is there any reason for Canadians to fear the same?

Thankfully, Canadian courts have not adopted the major questions doctrine.

As Mark Mancini points out, precursors to the U.S. major questions doctrine, as articulated in West Virginia, were less about a general constraint on administrative powers, and more about the level of deference that the courts should give to an administrative power or decision. Thus, where the exercise of a power raises “major questions,” the U.S. courts would enquire into whether that exercise was reasonable and within the powers delegated to the agency.

Mancini argues that this earlier version of the major questions doctrine bears some relationship to Canadian law on the standard of review for administrative decisions. In such cases, the courts will typically give some deference to the administrative decision-maker and assess only whether the decision was reasonable rather than if it was ‘right.’ However, the SCC held in Canada (Minister of Citizenship and Immigration) v Vavilov that if a question of law has an “impact on the administration of justice as a whole,” the court must determine whether the decision was correct rather than merely reasonable (Vavilov, at para 59).

However, unlike the major questions doctrine, the SCC stated for this rule to apply, it is not enough for the question of law to “[touch] on an important issue” or be “of wider public concern.” Instead, the question must be of “central importance to the legal system as a whole.” The Court emphasized that this “central importance” classification must not operate as a “broad catch-all category,” which would impose higher than necessary judicial oversight of administrative action (Vavilov, at para 61). Canadian courts are more concerned with deciding questions that impact the legal system as a whole than they are with interrogating the legislature’s specific delegations of power.

Fortunately, then, there does not seem to be any risk that the vague and potentially harmful version of the major questions doctrine will become part of Canadian law or could be used to undermine action on climate change.

A caution on Canadian smugness

It can be easy to look at the U.S. Supreme Court’s decision in West Virginia and feel “thank goodness the Canadian courts would not do that.” Such feelings of smugness may intensify after reading the SCC’s recent ruling upholding Canada’s national carbon pricing regime as constitutional. The carbon pricing ruling was undoubtedly an important gain for the climate justice movement. However, this focus on the judicial barriers to climate action in the U.S. can obscure the many ways that Canadian case law has opposed environmental movements, especially those led by Indigenous peoples.

Canadian courts have criminalized Indigenous land defenders, upheld injunctions on Indigenous territories sought by the fossil fuel industry, and ignored Indigenous nations’ own laws and processes of consent. Zoning regulations and environmental policies have resulted in the disproportionate dispersion of waste disposal sites and polluting industries near Black and Indigenous communities.

Moreover, the courts have yet to grapple in a meaningful way with the massive violations of human, property and other legal rights, and the challenge to the very fabric of Canadian society, posed by climate change. Until now Canadian courts have routinely dismissed climate change-related public interest cases as non-justiciable, rather than facing these difficult questions.

This fall, some of these issues were before the court in Ontario for the very first time. Mathur v. Ontario, brought by seven Ontario youth, concerns the obligations of the Ontario government to set and work towards a scientifically credible climate target. In Sierra Club v. BC the BC Supreme Court has been asked to consider whether BC’s Climate Change Accountability Act actually imposes accountability on the provincial government to show how it will meet its climate targets.

In the longer term the courts other fundamental questions will be heard by the courts, such as whether global fossil fuel companies bear some legal responsibility for selling products that they knew would harm BC communities.

To date the Canadian courts’ response to climate change has been better than we’ve seen recently from the US Supreme Court. But it still falls short of the type of dramatic legal innovations that are needed if the law is to do its part to tackle the climate crisis. Time will tell how we do as a country.