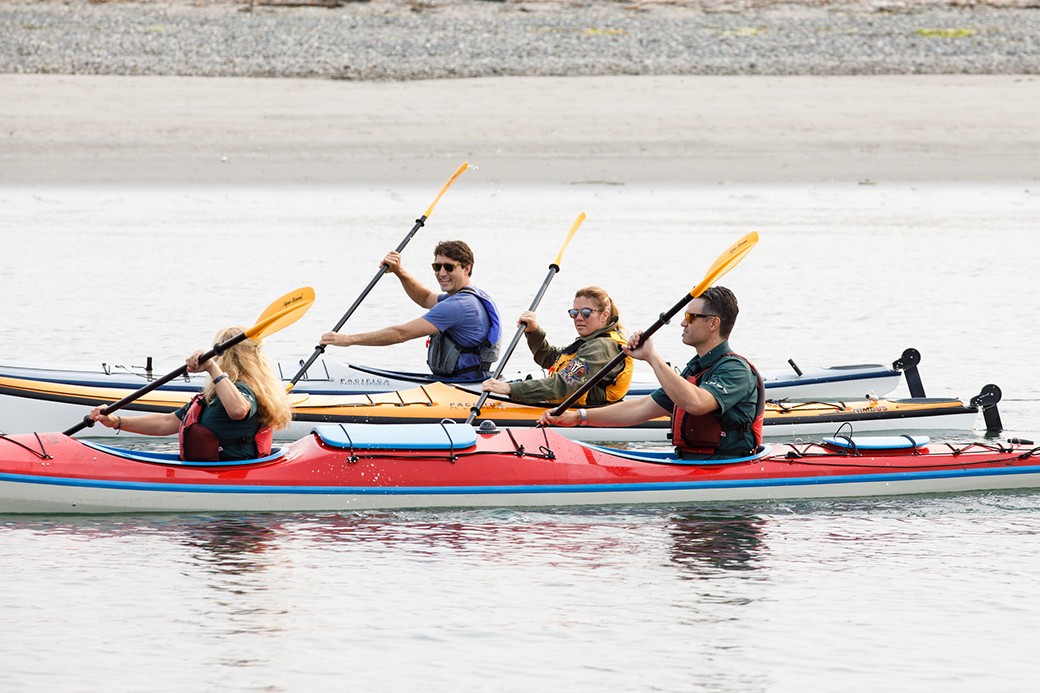 This could indeed be his legacy if he and his fellow ocean champion, Fisheries Minister Dominic LeBlanc, can maintain the momentum they’ve created on ocean protection, deliver on upholding the inherent jurisdiction of Indigenous nations and let divisive — and potentially catastrophic — pipeline and oil tanker projects die a natural death.

Here are five things that Canada did right this year — and a few things for Trudeau to work on in 2018.

The proposed amendments to our flagship ocean law, the Oceans Act, could catapult Canada back into a role it once held as a leader in oceans law.

During the 1970s, under the government of the fathers of Trudeau and LeBlanc, Canada passed the groundbreaking Arctic Waters Pollution Prevention Act, took centre stage at negotiations over the UN Convention of the Law of the Sea, introduced a stronger Fisheries Act and championed the rights of small-scale fishers.

Once passed into law — likely by the summer of 2018 — the amendments to the Oceans Act will speed up the process of establishing new marine protected areas (MPAs) and embed a precautionary approach in the act. These changes will make it easier for Canada to reach its marine conservation targets.

While additional legal changes, such as prohibiting industrial and extractive activities in MPAs, could strengthen this act even further, this is a great tune-up.

When the Liberals were elected in 2015, Canada was woefully behind on the international target to protect 10 per cent of coastal and marine areas by 2020 — only about one per cent of Canada’s oceans were protected at that time.

With swift and decisive action, the government created new MPAs on all three coasts. At the end of October, LeBlanc announced that Canada had met the interim target to increase protected areas to five per cent by 2017.

There’s still some debate over whether all these areas truly count as MPAs according to the guidelines set out by International Union for the Conservation of Nature.

In August, the federal government said it was committed to reaching an agreement with Inuit to establish the country’s largest marine protected area, Tallurutiup Imanga, also known as Lancaster Sound. The area will add another two per cent to Canada’s MPA target.

Inuit Qaujimajatuqangit, or Inuit traditional knowledge, was used to help identify the area to be placed under protection, which is home to Inuit and the species they harvest, including bowhead and beluga whales, narwhal, walrus and polar bears. It also led to an MPA with larger boundaries.

Sandra Inutiq, lead negotiator for the Inuit, sees the creation of Tallurutiup Imanga as an opportunity to create sustainable livelihoods and strengthen Indigenous rights to manage their lands and waters.

LeBlanc has promised to establish an expert panel to advise the government on minimum protection standards for MPAs.

While the push to establish new MPAs is critical, there are currently no overarching standards to prohibit harmful activities — such as oil and gas exploration or bottom trawling — in these protected areas.

Establishing minimum standards will bring Canada in line with the growing body of scientific literature that describes what’s needed to make MPAs effective, starting with a requirement that MPAs be “no-take,” or prohibit all extractive activities.

5. Used strong laws to save whales

The plight of whales continues to move Canadians. We saw the deaths of several critically endangered species make headlines this past year.

Strong laws can save whales. Fortunately, the government has issued eight Critical Habitat Protection Orders to protect whales and other marine species, including belugas and North Atlantic right whales. It has also promised long-overdue updates to regulations that protect whales from human disturbances.

There’s a lot more on the government’s oceans agenda.

Scientists and citizens alike are waiting for overdue promised amendments to the federal Fisheries Act that will protect fish habitat from alteration, damage and destruction — protections that the previous federal government eliminated, mandate the rebuilding of depleted fish stocks and support small-scale fishers and coastal communities.

Furor over fish farms continues, and the government has quietly started consultations on a much-needed new federal aquaculture act.

Trudeau promises to lead the G7 nations on global marine protection during Canada’s presidency in 2018.

But a lot could still stand in the way of Trudeau becoming Canada’s Oceans Prime Minster.

The approval of projects like Kinder Morgan’s Trans Mountain pipeline and tankers — after deeply flawed regulatory processes — is one serious obstacle. This risky project is vehemently opposed by many First Nations and runs contrary to Canada’s climate change goals.

Reforms to environmental assessment law and National Energy Board processes could help the government make fairer, more democratic decisions. But if oil tankers are permitted to travel through coastal waters in greater numbers, marine ecosystems will face greater oil-spill risks.

A more fundamental test of Canada’s leadership will be on its relationship with Indigenous peoples.

The government has pledged to fully implement the Calls to Action from the Truth and Reconciliation Commission and review Canada’s laws to ensure compliance with the UN Declaration of the Rights of Indigenous Peoples.

In the oceans context, giving life to these promises means far greater attention to Indigenous rights in marine areas, as well as their meaningful co-governance. It will mean recognizing the inherent jurisdiction and laws of Indigenous peoples within our multilayered legal system.

Life support from the oceans

The vast oceans are essential to life on Earth. They generate the oxygen that provides every second breath we take, and food for the body and soul.

Leaders around the world are waking up to their perilous state: Overfished, warming-up and acidifying. If all leaders strived to become an Oceans Prime Minister or president, the prospects for the future would be more promising.

Trudeau, with deep family roots on the Pacific coast, and LeBlanc, equally rooted in the Atlantic, are already showing ocean leadership — we can only hope that it will continue.