Who is responsible for climate change? | West Coast Environmental Law

News & Events » Environmental Law Alert Blog » Who is responsible for climate change?
Back to top

Who is responsible for climate change? 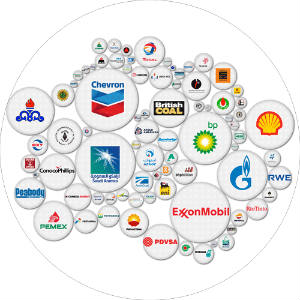 At some level we are all responsible for climate change.  But on another level, the fossil fuel companies whose very raison d’être is to get coal, oil and gas out of the ground, and make it available to our addicted economy, are also responsible.

And a new paper from noted climate scientist, Richard Heede, reported on in the Guardian paper and published in Climatic Change, lists 90 privately and publicly owned fossil fuel and cement companies, and a handful of nation states, that are collectively responsible for 2/3 of the total global emissions of greenhouse gases to date.  About half of the total emissions were generated during a period when the risks of climate change were well known.  Six Canadian companies appear on the list of privately-owned companies (together with many companies doing business in Canada).  For more information on the paper, visit the new Carbon Majors website.

The Guardian has an excellent interactive graph that shows which companies and state entities are responsible.

The revelation that such a comparatively small group of actors has played such a large role in causing climate change will result in much discussion - such as what it means to be responsible for climate change, and who will pay for the immense damages (already estimated at more than a trillion dollars per year and rising).  And, of course, what that means for breaking our addiction to fossil fuels.

[T]he list shows that the levers of power that must be shifted to avoid climate meltdown are held by relatively few hands.

You can fit 90 people on one London bus: the current bosses of those energy companies exploiting fossil fuels can be targeted. … Combating climate change is the biggest challenge ever faced by humanity. It is nothing less than re-engineering the world economy by taking on its greatest corporations. The new list shows that those vested interests may be great in power but they are small in number.

I’m not certain that the identities of 90 of the world’s top emitters is as much of a revelation as Carrington suggests.  We already knew that Exxon and Chevron were among the major players in the discussions about what a low carbon future looks like.

Responsibility of the 90 emitters

However, the list of 90 emitters also lets us have a conversation about who is ultimately responsible for the damage that is being caused by climate change.  Carrington is curiously reluctant to have this conversation:

It is tempting to see the list as a rogues gallery, full of familiar names such as ExxonMobil who have lavishly funded campaigns to deny the role of fossil fuels in climate change. The prospect of legal challenges to extract damages from the titans of the extractive industry looks attractive, particularly as scientists get ever better at attributing extreme weather events to the heat trapped by carbon dioxide. …

But the pollution belongs to all of those whose lives have been transformed over the last 250 years by cheap energy.

It seems to me that Carrington adopts a narrative that has ham-strung action on climate change, and which is to the benefit of large-scale GHG emitters.  Fossil fuel companies want this to be about the consumer: it’s all of our fault – not their fault for digging fossil fuels out of the ground to provide to a willing market.  If we didn’t buy the stuff, there would be no market.  Blame the addict, not the dealer.

But it is precisely this point that will be debated in the coming days as a result of Heede’s paper.  We may all be in some sense responsible for global warming, but it’s pretty clear that some of us are more responsible than others.  Individual smokers may be responsible for increased health care costs, but that doesn’t mean that cigarette manufacturers are not in many ways responsible as well.

This debate is already underway.

One of the brilliant moves of the climate divestment movement has been to attempt to change this narrative.  Instead of focusing on individual responsibility, divestment focuses on a relatively small number of fossil fuel companies that are said to be responsible for climate change, and to press investors to shun those companies.  Heede’s work feeds very nicely into this narrative.  Indeed, Fossil Free Canada was quick to release a graphic linking Heede’s 90 companies to their own divestment work.

Similarly, movements to prevent construction of new coal-fired plants, to block tar sands expansion and to oppose pipelines, coal ports and other fossil fuel infrastructure, do not accept that we are all equally responsible – but instead place responsibility at the feet of the fossil fuel industry.

Heede’s paper provides the basis for a public discussion about responsibility, and I think that focusing on the responsibility of a smaller number of large-scale GHG emitters will be less disempowering than the claim that we are all responsible.  That’s not to say that Carrington is wrong to note that cheap fossil fuel energy has benefited many of us.  But he is wrong to suggest that that fact lets fossil fuel companies off the hook for responsibility for past emissions (particularly in the time period since they became aware of the damage that their product was causing).

You cannot have climate-related damages in the trillions of dollar range and not expect to have a conversation about who should pay.  As we’ve written before, governments – even “rich” countries – do not necessarily have the funds needed to compensate climate victims or to pay for societies to adapt to the new climate reality.  By contrast, the top 10 emitting private companies, responsible for about 16% of greenhouse gas emissions to date, have a combined annual income of $140.7 Billion (figures courtesy of Greenpeace).

Indeed, the conversation about who should pay for climate damages is occurring, as I write this, at the Warsaw Climate Change Conference, with difficult (and so far unsuccessful) talks over an international mechanism to address climate change loss and damages:

The question of whether to establish a new global mechanism has caused deep divisions, because richer nations fear it could be used to make them pay compensation for the consequences of their planet-warming emissions to poorer countries suffering the worst impacts of more extreme weather, rising seas and gradual environmental changes such as desertification.

Canada, along with the U.S. and Australia, has been identified as one of the most vocal opponents of the loss and damages mechanism.

Compensation under an international mechanism is probably some way off, but negotiations to date have focused on country-to-country obligations; one might equally ask whether international law’s polluter pays principle should not apply – meaning that fossil fuel companies have responsibility for at least some of these losses.  An exclusive focus on the obligation of countries to pay for damages means that taxpayers are on the hook, unless the countries are able to collect funds from fossil fuel companies and other large-scale emitters.

Similar questions will also arise within countries – whether through court cases, new legislation dealing with compensation or through public policy debate after extreme weather events.  As we’ve written:

[C]limate impacts are going to be increasing, climate science improving, and greenhouse gas emissions are showing no sign of stopping.  As the impacts of climate change become more and more significant, you can bet that the public will want polluters to pay.

Although I’m a lawyer, West Coast does not directly litigate, but instead presses for stronger environmental laws.  So it may not be surprising to hear that we don’t believe that litigation is the only way that laws requiring GHG polluters to pay climate compensation could develop.  It’s a fair bet that we will be hearing more calls for legislation requiring GHG polluters to pay for climate change adaptation and other climate compensation in coming years.

Richard Heede has done an incredible piece of work in quantifying the relative contribution to climate change of many of the world’s largest, and deepest-pocketed, GHG emitters.  It is a  step towards the important conversation about breaking our addiction to carbon-intensive fuels, and about the role of fossil fuel industry in cultivating that addiction, and paying for the damages that it has caused. Perhaps one of the questions about these companies should be not “why would we hold them responsible?” but “why would we grant them immunity?”