Whose (pipe)line is it anyway? Adventures in jurisdictional wonderland | West Coast Environmental Law

News & Events » Environmental Law Alert Blog » Whose (pipe)line is it anyway? Adventures in jurisdictional wonderland
Back to top

Whose (pipe)line is it anyway? Adventures in jurisdictional wonderland 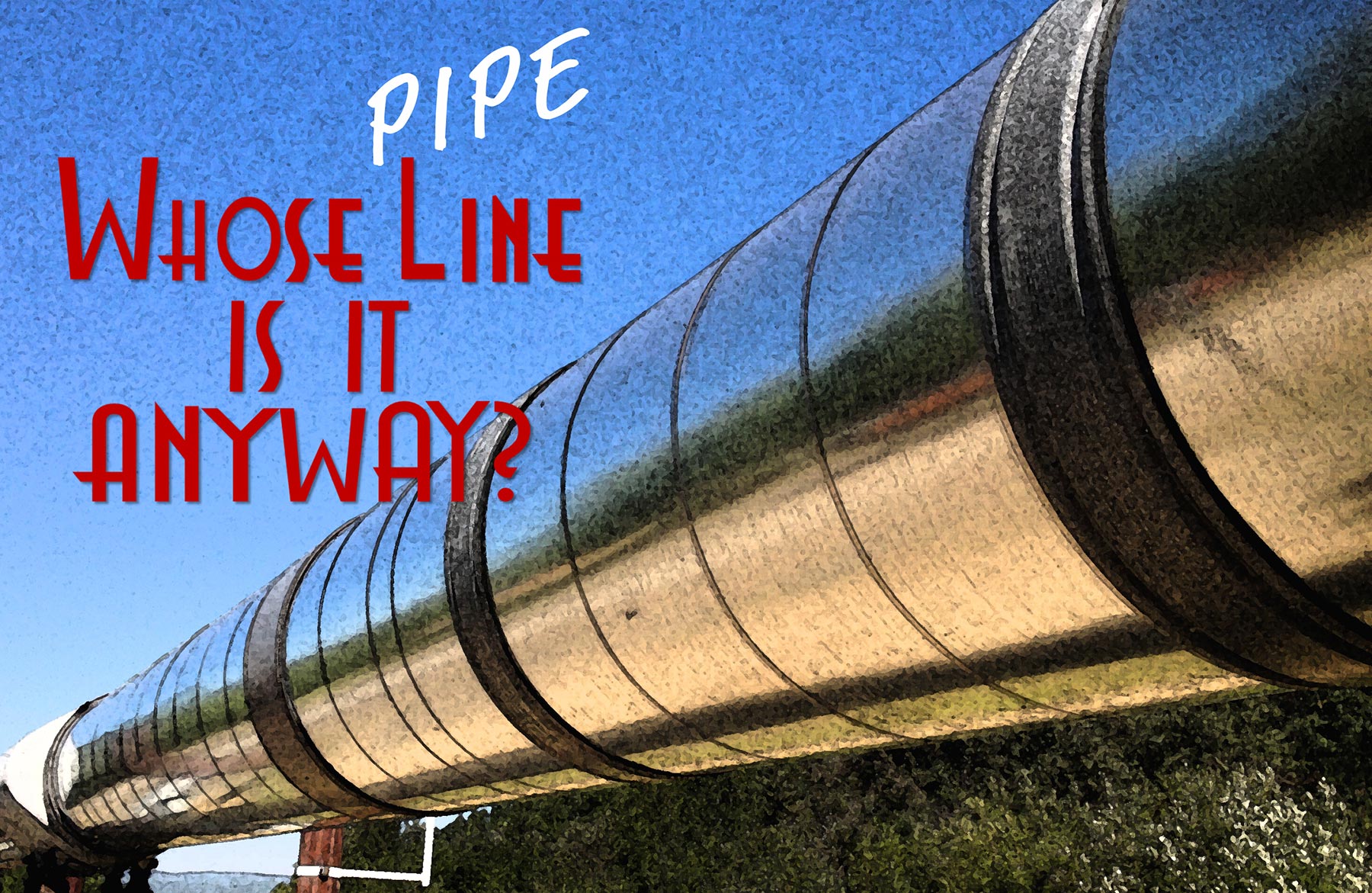 As we await the decisions in the 15 legal challenges to the federal approval of the Kinder Morgan Trans Mountain project, the two challenges to BC’s approval (both likely in the next six months), the potential enforcement of Indigenous law bans of Kinder Morgan, and the National Energy Board’s (NEB) ruling that could impact the applicability of municipal bylaws, it seems like a good time to delve into some of the jurisdictional issues at play.

With the Canadian government insisting that the pipeline will go ahead, and the BC government, as well as many Indigenous and local governments, steadfastly opposed, the question of who has legal authority (or jurisdiction) over the pipeline – and what they have the power to do – is hugely important right now.

Kinder Morgan, Alberta and others are arguing that the federal government can and should use its powers to push the project through over the objection of the other levels of government. But what about local laws and decision-making?

The National Energy Board and constitutional controversy

These fundamental constitutional questions have recently come to a head with applications made by Kinder Morgan to the NEB.

The scandal-plagued energy regulator heard a motion by Kinder Morgan to bypass some of the City of Burnaby’s bylaws in order to start construction at the razor wire-enclosed Westridge Marine Terminal. Kinder Morgan also asked for the NEB to set up a generic process to bypass other provincial and local government permit and bylaw requirements in the future. This part of the motion was split off, so the NEB could rule first on the Burnaby bylaws, and then later on whether to set up a process for future disputes.

In the Burnaby bylaw issue, Kinder Morgan claimed that the permit process was taking too long and suggested that Burnaby was deliberately delaying the processing of permit applications. Kinder Morgan invoked constitutional doctrines of paramountcy and interjurisdictional immunity to support their view that the pipeline and tanker project is solely within federal jurisdiction, and Burnaby’s bylaws should not apply.

Burnaby’s position was that Kinder Morgan’s inexperience in actually building pipelines in Canada caused the company to underestimate the number of permits required, and the time it would take to process them. In Burnaby’s submission, the City said it could not delay or expedite its permitting process for the project, and it had not denied any permits, therefore there was no need to apply paramountcy or interjurisdictional immunity.

The attorneys general of BC, Alberta and Saskatchewan weighed in on the Burnaby bylaw constitutional question, while the municipalities of Chilliwack, Langley and Surrey made arguments about the process for future disputes, along with the Attorney General of Canada.

On December 7th, 2017, the NEB issued its decision on the Burnaby bylaw question: Kinder Morgan could bypass a few of the bylaws, but only as they related to construction activities at Westridge Marine Terminal. The NEB did not issue reasons with its decision, stating that they would be forthcoming. The decision on the future process for other local disputes is also pending.

UPDATE: On January 18th, the NEB released its reasons for the Burnaby bylaw decision, as well as its decision on a process to resolve local disputes. Read more in our update here.

In this case, we still don’t know how the NEB panel reached its decision, as reasons have not yet been released (and Burnaby cannot appeal, if it decides to appeal, until those reasons are released).

However, we can infer that the NEB, in reaching its decision, applied the constitutional doctrines of “paramountcy” and/or “interjurisdictional immunity.”  To do so, the Board must have determined that Burnaby’s bylaws resulted in a frustration, operational conflict or impairment of federal jurisdiction over national pipelines. Let’s look a bit more at what’s going on.

So, whose pipeline is it anyway?

Canadian federalism is primarily understood by the courts as cooperative federalism. That means that federal and provincial laws are understood to overlap, and presumed to function without operational conflict. Municipal laws are considered provincial because municipalities are created by provincial statute in Canada. In this system, neither level of government is subordinate to the other.

While interprovincial pipelines like Trans Mountain are under federal jurisdiction, local governments – be they provinces or municipalities – continue to have an important role to play in issuing permits and ensuring the safety of their residents. And provinces, as representatives of the Queen (Crown), must fulfill their constitutional obligations to First Nations when making decisions that affect their rights and title.

However, sometimes there are decisions from the senior levels of government (or from local governments, which are created by provinces) that do seem to conflict. In these cases, the courts must decide how to balance the powers and rights of each level of government.

The doctrine of “paramountcy” says that where there is an actual and unavoidable conflict, the federal government’s laws prevail – however, this only occurs when it would be impossible to comply with both.  The doctrine of “interjurisdictional immunity” is an older doctrine, which the courts have reined in in recent years. It holds that some areas of federal jurisdiction are important enough to Canada that only the federal government can regulate them. However, recent court cases have cast doubt on this doctrine, preferring a more cooperative approach.

For example, as the Supreme Court of Canada stated in the Tsilhqot’in decision (para 148):

Interjurisdictional immunity – premised on a notion that regulatory environments can be divided into watertight jurisdictional compartments – is often at odds with modern reality. Increasingly, as our society becomes more complex, effective regulation requires cooperation between interlocking federal and provincial schemes. The two levels of government possess differing tools, capacities, and expertise, and the more flexible double aspect and paramountcy doctrines are alive to this reality: under these doctrines, jurisdictional cooperation is encouraged up until the point when actual conflict arises and must be resolved. Interjurisdictional immunity, by contrast, may thwart such productive cooperation.

Kinder Morgan has taken the fact that interprovincial pipelines are under federal jurisdiction about as far as possible – suggesting that they are under the exclusive jurisdiction of the federal government, and that no other laws apply. However, in Canadian law, as long as validly-enacted local or provincial laws do not actively frustrate or impair the operation of federal law, they continue to apply.

The NEB’s ruling that Burnaby’s bylaws frustrate, conflict with or impair federal jurisdiction is troubling for a number of reasons. First, Burnaby hadn’t actually enforced its bylaws. The city was processing permit applications in due course and it was simply taking too long for Kinder Morgan. In other words, as Burnaby and BC argued before the NEB, it was premature to assess whether paramountcy or interjurisdictional immunity applied because there was no actual conflict until Burnaby denied a permit. Kinder Morgan’s problem was that it was taking longer than it wanted, not that it was denied permits by Burnaby.

Raise your hand if you have navigated any government bureaucracy in less time than you wanted. Anyone?

Further, Kinder Morgan seems to believe that since it has federal approval, it should get special treatment, based on its own construction timeline, and should not have to comply with local bylaws that disrupt that timeline. This is despite the fact that Condition #2 of the NEB’s 157 conditions requires Kinder Morgan to live up to its promises to follow local laws. This is what caught the attention of Langley, Surrey and Chilliwack, who all opposed the generic dispute process that Kinder Morgan proposed.

Trans Mountain's Notice of Motion should be seen for what it is, namely, an attempt to unlawfully fetter, circumvent and undermine the legislative scheme to the detriment of municipalities, their residents and the public in general […]

Trans Mountain cannot expect preferential treatment, expedited review, or allocation of inordinate number of staff resources to the [Trans Mountain Expansion Project]. Similar to Trans Mountain, other applicants depend on the timely processing of their applications.

[W]e see no other reason for the proposed generic process than to use it as leverage against the City.

Alberta, for its part, supported Kinder Morgan’s position that the federal approvals warranted bypassing local laws because the project was part of a national interest energy decision – a position that must have had Peter Lougheed spinning in his grave.

First Nations like Tsleil-Waututh, Squamish, and Coldwater have been at the forefront of the opposition to Kinder Morgan, withholding their free, prior and informed consent, and in some cases ruling the project illegal under Indigenous law.

And while the company states that it has agreements with over 50 (of the 150+) First Nations on the route, these agreements do not guarantee consent. For example, one Sto:lo nation’s mutual benefit agreement was rejected by the community in a vote. In another example, the Tk’emlups Indian Band in Kamloops, BC was reported to have signed a mutual benefit agreement, but then was among the six First Nations challenging the federal decision in court.

This opposition is punctuated by the Secwepemcul'ecw Assembly’s Declaration on Protecting Our Land & Water Against the Kinder Morgan Trans Mountain Pipeline which states:

We the Secwepemc have never provided and will never provide our collective consent to the Kinder Morgan Trans Mountain Pipeline Project. In fact, we hereby explicitly and irrevocably refuse its passage through our territory.

In addition, commitments (by Alberta, Canada and BC governments) to fully implement the United Nations Declaration on the Rights of Indigenous Peoples and the Truth and Reconciliation Commissions Calls to Action cannot be consistent with the federal government forcing a pipeline without the consent of local and disproportionately impacted communities.

Regardless of your views on this particular pipeline (we are opposed, in case that wasn’t clear), anyone who thinks their locally-elected government or local First Nations shouldn’t get railroaded by a US corporation just because they have a federal approval should be very concerned about these recent developments.