Why the NEB downplayed the impact of a major bitumen spill 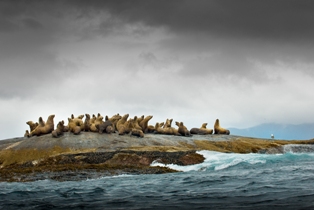 We suggest that the Enbridge JRP report is illustrative of two concerns that we’ve raised about changes to Canada’s environmental assessment laws:

What the JRP said

The JRP heard extensive evidence on a range of topics related to possible spills.  They were dismissive of the impacts of “routine,” “minor” spills, but did conclude that a major spill is possible, although “unlikely.”  However, the panel downplayed the long-term impacts of such a spill:

The Panel finds that a large oil spill would not cause permanent, widespread damage to the environment. … Past spill events indicate that the environment recovers to a state that supports functioning ecosystems similar to those existing before the spill. The Panel finds that, in certain unlikely circumstances, a localized population or species could potentially be permanently affected by an oil spill.

A large spill would cause temporary, significant adverse environmental, societal, and economic effects, including economic burdens to users of affected environments for fishing, hunting, gathering, and tourism. Research from past spills shows that environmental, societal, and economic burdens of a large oil spill would likely be reduced by effective spill response, financial compensation, and natural recovery processes within the environment, in weeks to months. Some components, such as individual species and habitats, would likely recover within weeks, months, or years. In the case of large mammals, recovery times could extend to decades. The Panel notes that users of natural environments may experience changes in relative abundance, distribution, or behaviour of biota during recovery from a spill.

It seems difficult to square findings that a spill could impact large mammals for decades, and permanently affect some species “in certain unlikely circumstances,” with the Panel’s overarching conclusion that even a large spill would not cause “permanent, widespread damage.” Contrast the JRP’s conclusion with the observations of scientists investigating the Exxon Valdez spill, summarized in a report released by Raincoast Conservation Foundation just a few days before the JRP report:

Before the Exxon spill, scientists assumed that impacts to wildlife from marine oil spills were primarily from acute toxicity (which causes immediate mortality). What we subsequently learned from the Exxon spill, and the extensive number of wildlife deaths and scientific studies that followed, is that weathered oil can be toxic at low concentrations for decades, and produce delayed and sub-lethal effects that harm wildlife and food webs for years.

The Times Colonist’s Les Leyne, after noting that Enbridge’s own experts accepted that “… it doesn’t take a lot of wit to come to the conclusion that a major oil spill would have significant adverse effects on a river,” went so far as to question whether the Panel’s take on the risk might have been driven by the conclusion it reached (as opposed to the other way around):

Former National Energy Board chairman Roland Priddle, an expert on the process, was working as a consultant for Enbridge when he testified before the panel last year. He stated that if the panel found there were significant adverse environmental effects and related socio-economic impacts caused by the project, after proper allowance for mitigation of those effects, then the panel “should recommend against.” …

If you accept that proposition, then the panel could not accept the idea that a large oil spill would represent a long-term blight on the environment and still recommend in favour the pipeline.

To get a better sense of how the panel dealt with uncertainty and risk in the context of a spill, it is instructive to look at how they handled the risk that spilled diluted bitumen would sink (making clean up and recovery far more difficult):

Although there is some uncertainty regarding the behavior of dilbit spilled in water, the Panel finds that the weight of evidence indicates that dilbit is no more likely to sink to the bottom than other heavier oils with similar physical and chemical properties.

Note that the panel did not find that diluted bitumen would not sink – simply that it was not likely to do so quickly unless it came into contact with sediment or other particulate matters, and that the risks were similar to other heavy oil spills.  Indeed, the Panel expressly noted that: “Dilbit may sink when it interacts with sediment or other suspended particulate matter, or after prolonged weathering.”

There was evidence to support that view. Environment Canada provided evidence that:

Northern Gateway’s response planning model does not account for sinking oil or for oil-suspended particulate matter interactions. … For oils with densities close to that of water, like both the diluted bitumen and synthetic crude products, even small amounts of sediment can cause sinking. Environment Canada is concerned that oil sinking and oil-sediment interactions have been underestimated in the provided scenarios. In the cases of both the Enbridge-Kalamazoo and the Kinder Morgan-Burnaby spills, significant oil-sediment interactions occurred.

But the panel also heard from Enbridge experts who hotly disputed the likelihood of this occurring.

And on January 14th, less than a month after the end of the JRP process, Environment Canada released a detailed report (originally prepared in November 2013) that not only confirms that diluted bitumen can sink in the presence of sediment, but tells us a bit more about other challenges associated with cleaning it up:

The question of whether dilbit products spilled in the marine environment will float or sink depends on their exposure to a number of natural processes and the duration of exposure. … The oil spill treating agent (chemical dispersant) and mineral fines used in this study were either ineffective or partially effective when applied to the dilbit products under these limited conditions. The physical properties (e.g., density, viscosity and adhesiveness) of these products  limit the effectiveness of currently-available spill treating agents, thus restricting remediation and  potentially contributing to the persistence of the products in marine environments where  seawater temperature is

So far as we are aware, no official explanation has been given as to why this report was not released in November – before the JRP report was completed.  Paul Paquet, a scientist from Raincoast Conservation Foundation has suggested that had this report been available to the JRP, it might have influenced its recommendations:

"It may not have changed their ultimate decision to recommend the project be approved but it could have changed some of the contingencies, requirements and expectations for Enbridge," Paquet said.

Should the National Energy Board be doing environmental assessments?

With that context – albeit focused on only one of the many issues considered by the JRP (although an important one) – what can we say about the legal structures that gave rise to the JRP report?

First, the JRP, despite claiming that it was applying a precautionary approach where there is uncertainty, seems in at least some cases to have reached conclusions that downplay risks of a major spill and its impacts.  While there are certainly examples of other environmental assessment panels that have done the same, we re-iterate what we said in 2010, when the government first moved to have the NEB conduct major environmental assessments:

Don’t get me wrong – if you want an agency that has as one of its goals ensuring that “Canadians benefit from efficient energy infrastructure and markets” – I can think of no more qualified agency than the NEB. I’m being flippant, and I should acknowledge that the NEB also has environmental protection goals, but the point is that not all government agencies serve the same role or function in the same way. You can’t assume that an environmental assessment carried out by one government agency would be as transparent, credible and effective if it were carried out by another.

Gary Schneider of the Canadian Environmental Network – Environmental Assessment Caucus has made this point well. In addition to the differences in mandate, Schneider points out that the individuals who serve on the NEB are less independent from the federal government and more likely to have previous ties to the energy industry. …

Canadian Association of Energy and Pipeline Landowner Associations, (CAEPLA), in an alarming piece by Andrew Nikoforuk, has gone so far as to call the NEB a “captured regulator,” – meaning that the agency aligns its interests with the industry it is supposed to regulate:

The NEB, which must behave in an unbiased fashion, even dropped the word regulator from its lingo and replaced it with "partner." In fact, the board repeatedly described itself as an industry "partner" until CAEPLA politely asked how one partner could regulate another partner. (In 2008, Gaetan Caron, the chair of the NEB, gave several speeches describing the vision of the NEB as an "active, effective and knowledgeable partner in the responsible development of Canada's energy sector for the benefit of Canadians.")

Without necessarily endorsing that diagnosis, it is certainly true that the NEB has twin mandates of protecting the public and promoting oil and gas industry development which will sometimes be in tension, and that this creates an incentive for NEB Panelists to try to downplay conflicts between their competing mandates.

The other interesting observation related to Environment Canada’s recently released report on diluted bitumen is that Environment Canada was not able to complete the research and table it in the hearing stage of the environmental assessment process.  Doubtless Enbridge would have wanted to respond to it, and many of the interveners would have had submissions related to this important evidence.

Why couldn’t the NEB wait a few months until the report was completed to hear evidence on this report?  And, assuming that the federal government had a legitimate reason for waiting to release the Environment Canada report, why couldn’t the panel wait for its release before finalizing their report?

Because of tight timelines that are written into the new Canadian Environmental Assessment Act, 2012.  Last August (2013) we cautioned that artificial timelines could compromise a science-based assessment of the Enbridge pipeline:

While we agree that environmental assessments can, and should, be done as efficiently as possible, the reality is that good science can take time, especially when evaluating large and complicated projects.  And that’s particularly the case when you’ve cut back on the number of government scientists available to do the work.

Allowing government scientists – as well as community groups and First Nations – the time that they need to conduct original research, or recreate or double-check the research compiled by a company, is essential to a scientific process.

Now we’re waiting for the federal cabinet to decide whether the Enbridge pipelines and tankers project should be given an environmental assessment certificate.  But in our view the process has been anything but the “science-based” process that Prime Minister Harper promised Canadians.

The reality is that social licence can’t be rushed, and weak environmental laws hurt, rather than help, industry.  As First Nations and others line up to challenge the Enbridge Pipeline in court, and as Enbridge continues to find itself unable to secure customers, that reality is increasingly clear.