Yinka Dene Alliance kick off Day 2 of the Enbridge hearing 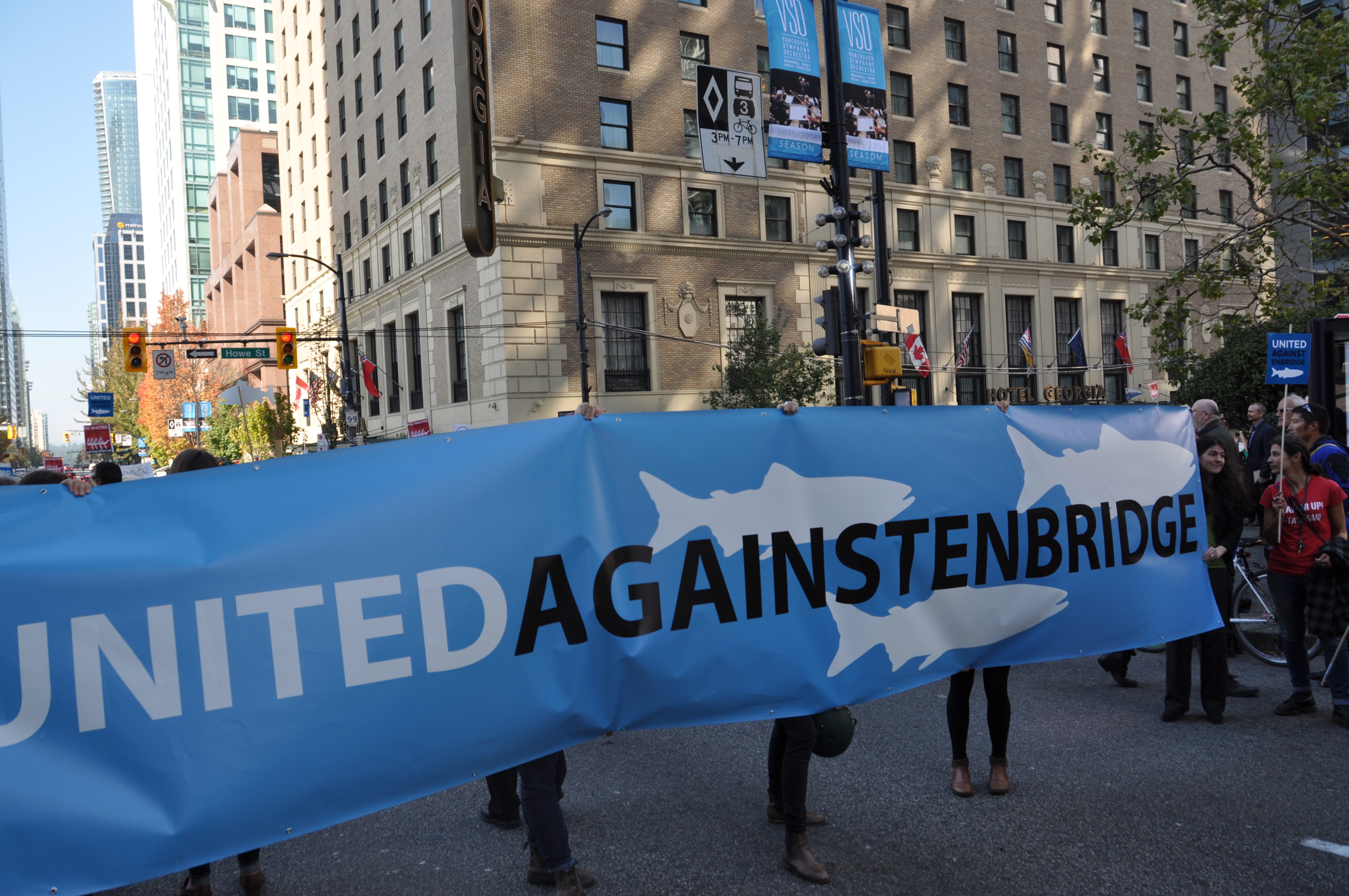 Spirits remained high in the 8th floor courtroom even as a dense fog settled on downtown Vancouver. The courtroom was jam-packed all day long while lawyers representing the Nak’azdli, Nadleh Whut’en, Gitga’at and Gitxaała Nations made their cases. Watching the proceedings on a video-screen in an overflow room felt a bit like going to a matinee movie screening. Except with less popcorn and far more mention of “jurisdictional mazes”.

Forty community members from Nak’azdli and Nadleh Whut’en Nations travelled almost 1000 kilometers in a rented bus to witness the proceedings and lend support to the lawyers arguing their case. They watched in anticipation as Cheryl Sharvit, counsel for Nak’azdli and Nadleh Whut’en Nations along with Gavin Smith from West Coast Environmental Law, brought forward their case.

The Nak’azdli and Nadleh Whut’en Nations have governed themselves for thousands of years using a system that includes land management territories known as keyah (Nadleh) or keyoh (Nak’azdli) that are associated with extended family units. They have a complex system of laws to manage and steward the lands and resources on their territories. In court, they made the claim that this governance system gives rise to stewardship governance and decision-making rights that are protected under section 35 of the Constitution Act, 1982.

Nadleh and Nak’azdli’s main argument was that Canada failed to consult the Nations on their governance rights. Sharvit clarified that her clients are not asking for a veto over development projects. What they want is to have their governance system meaningfully included in the Crown decision-making process. To have their laws respected as laws. Instead, the Crown ignored Nadleh and Nak’azdli’s governance rights entirely and deferred them to hypothetical future treaty negotiations. Sharvit added the communities “have never faced a risk this great from a single project.” Deciding to approve the Enbridge pipeline without consulting these Nations about their systems of laws and governance violated the honour of the Crown and ran counter to the goal of reconciliation underlying the Crown’s duty to consult.

Next up, Michael Lee Ross, on behalf of the Gitga’at First Nation argued that evidence the Gitga’at put forward before the Joint Review Panel (JRP) proves their Aboriginal title to portions of the coastal tanker route. He argued that the decision to approve the pipeline without the consent of the Gitga’at First Nation infringed this title and failed to promote reconciliation. Grace Jackson, co-counsel for Gitga’at, highlighted numerous errors in the JRP report including vague and general findings about Aboriginal groups that were not specific to Gitga’at concerns.

Representing the Gitxaała First Nation, the last of the eight First Nations applicants in this hearing, Robert Janes discussed how the project would negatively impact the Git Lax Moon, or the“People of the Salt Water”. The trespass of oil tankers through the heart of the Gitxaała territory would be long-lasting, irreversible, and would diminish the authority (or “dirty the blanket”) of the Sm’gigyet (house leaders). Janes presented the Gitxaała’s claim to Aboriginal title over a section of the oil tanker route and argued that meaningful Aboriginal title is about “making Aboriginal people part of the process in deciding what will happen to their lands.”

Gitxaala members honour their lawyer Robert Janes at the end of the day. (Photo by Georgia Lloyd-Smith)

Lawyers from Amnesty International – an intervenor in this case – finished off the day by shedding light on the relevance of international law in these proceedings. In particular, the lawyers argued that as a party to the United Nations Declaration on the Rights of Indigenous Peoples (UNDRIP), Canada is required to ensure that Indigenous peoples have effective and meaningful participation in decisions potentially affecting their rights.

From a law nerd perspective, it was another riveting day in court. The lawyers delivered novel, precedent-setting arguments with passion and precision. The panel of judges remained engaged throughout and pressed the lawyers on some challenging points of law.

Perhaps even more impressive was the display of support from Chiefs, Elders, and community members, some of whom travelled hundreds of kilometres to witness the proceedings. The crowd applauded and cheered for the good work of the lawyers at the end of the day.

Back in court next week from October 5th to October 8th. Rest up and see you on Monday for the ENGOs submissions!