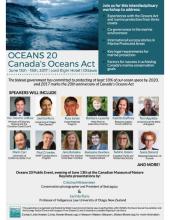 Please see below to download materials for the Oceans 20 Interdisciplinary Workshop on Canada's Oceans Act (June 13-15, 2017).

1) Bill C-98 and the Oceans Act: A Retrospective

2) Brief on Bill C-98 (The Oceans Act) Presented to the Standing Committee on Fisheries and Oceans October 24, 1995

These two briefs present background on the early history of the Oceans Act from an ENGO perspective.

This backgrounder explores co-governance of MPAs between Indigenous nations and the Crown in Canada. [Version française]

This timeline captures some of the key developments in marine protection law and targets to create MPA networks, both in Canada and around the globe.

Different countries have different laws governing the creation of marine protected areas (MPAs). This chart shows the main MPA law or policy from each country, and demonstrates the progress being made in marine protection in different parts of the world.

7) Jurisdiction in Coastal BC Infographic

There are many different legal authorities and regulations that have some bearing on the management of the shoreline and marine environment in BC. The infographic demonstrates the need for a more integrated approach to coastal management, involving all levels of government – federal, provincial, Indigenous and municipal.

8) Process: Establishing and Managing MPAs under the Oceans Act

The DFO process for selecting and designating an Oceans Act MPA.